I have seen Reynad's dragon priest the other day and it inspired me to build a dragon priest based on his list. Reynad is a very skilled player and what I noticed is that he is very skilled in piloting tempo decks such as zoo. When i played his version of the priest deck, it did not suit my style since it is more tempo based and once you lose board, you cannot recover, so I built a dragon priest that is more suitable to my style and more control based so that even if I lose board, I can have a comeback.

I have reached Legend rank quite quickly with this deck from 0 stars in rank 1 to legend while only losing one game against patron warrior. (The video below explains the card choices and also gameplay video describing how I pilot the deck. It also shows proof of legend.)

It is a long video but has interactive buttons to skip between matches so you do not need to watch them all!

BONUS - What to Craft in TGT

There are 3 types of mulligan on ladder and they are: Aggro, Control and Patron Warrior (I know patron gets its own mulligan cause they are that good)

You want your hand to be aggressive as possible so that you can fend off early aggression.

Definitely if you feel that your hand is strong enough to survive the early game, you can definitely keep mid-game to late-game cards like azure drake, twilight guardian, blackwing corruptor or even chillmaw for instance.

If you do not feel confident then hard mulligan for the cards I stated above.

Usually against paladin or totem shaman, I would keep Mind Control Tech in my opening hand

You will want as much sticky creatures as possible against the control match-up so that you can maintain consistent board control early and start to react against their cards during the mid to late game. Having these sticky creatures can survive common removals such as wrath, death bite, fiery war axe, and rock biter for instance.

This is probably the worst match-up for priest, but you need to play as aggressive as possible in this match-up so that the game does not stretch out long enough so that they can combo you down in one turn. Patron warriors usually like to keep all their combo pieces until late game again priest since they can't potentially burst them down.

Consistently remove their creatures and try not to leave injured minions alive to combo with battle rage.

In the early game, patron warrior enjoys playing Acolyte on turn 3 against you because they know they will potentially draw 2 or more cards. In this case

Mulligan is fairly similar to the control match-up

Shrinkmeister - I took out two wild pyromancers for this card is because Shrinkmeister can really help out with trading while also maintaining your creatures on the board and keeping them healthy. Also this card can be synergized with Cabal Shadow Priest and Shadow Word Pain to widen their effect range.

Blackwing Technician - This card is pretty powerful when played on curve and can potentially snowball the game with the dragon synergy.

Vol'jin - Since I took out a lot of dragons for tech cards, this card can replace rend and they serve a similar role in the deck where it is used to take out a threatening creature we cannot handle. Vol'jin has more range than Rend.

Chillmaw - As the meta is solidifying, I believe Chillmaw is a must play in priest as it deals with Paladins quite well and there are a lot of decks with low health minions, so playing this definitely helps against the aggressive match-ups. It also counter patrons, so that is a plus. :)

Lightbomb - Just more AOE to counter secret pally and with the amount of board clear and early game we have in this deck, we have a really high chance to win against secret pally and other aggressive match-ups. Lightbomb is also good to counter dr. boom, mysterious challenger and also patrons.

Sylvanas Windrunner - I just like this card since the priest has so many cards to manipulate her in a way that I can guarantee I steal such as cards like shadow word death and lightbomb.

However, if patron warrior were to rise up again, then Chillmaw will be a great sub instead of holy nova. 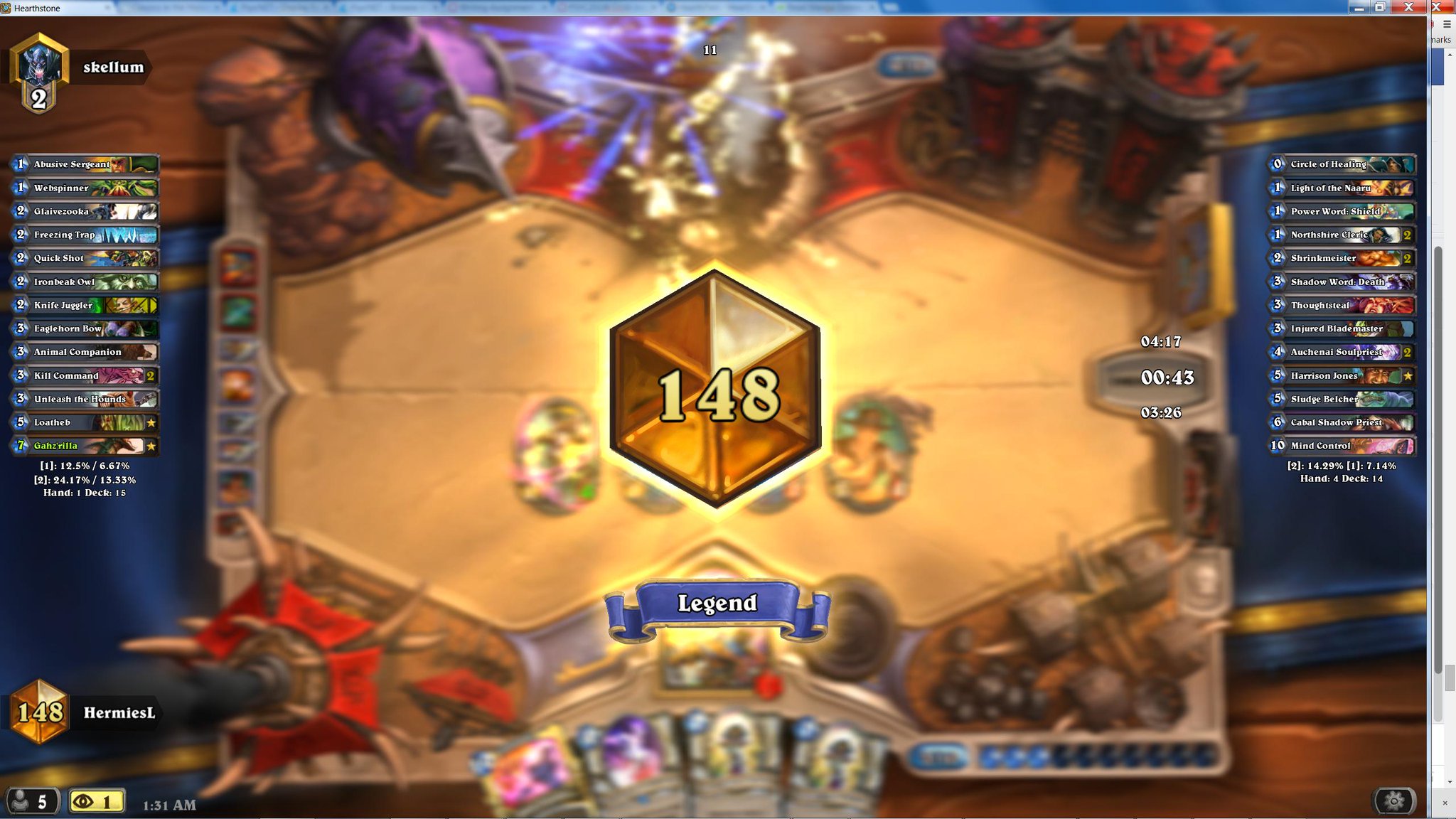 Was legend with priest before, so I somewhat know what I am talking about :)