Hi, my name is Jordan aka TheJordude and I am a pro player currently playing for compLexity gaming. I recently hit legend (July 2015 season) with my interpretation of Midrange Hunter. I had a 100% win rate from rank 5 to legend (#4 currently) with this deck, climbing from 5 to legend within 3 days (school and work prevented me from playing all day).

You can find me on:

Here is the image of my spreadsheet just keeping track of my matchups (yea its a crappy spreadsheet, working on a better one) 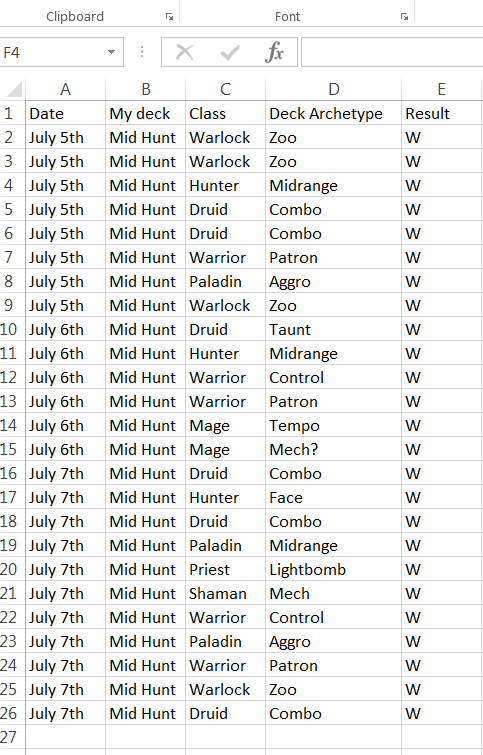 Here's a screenshot of #4 legend with this deck 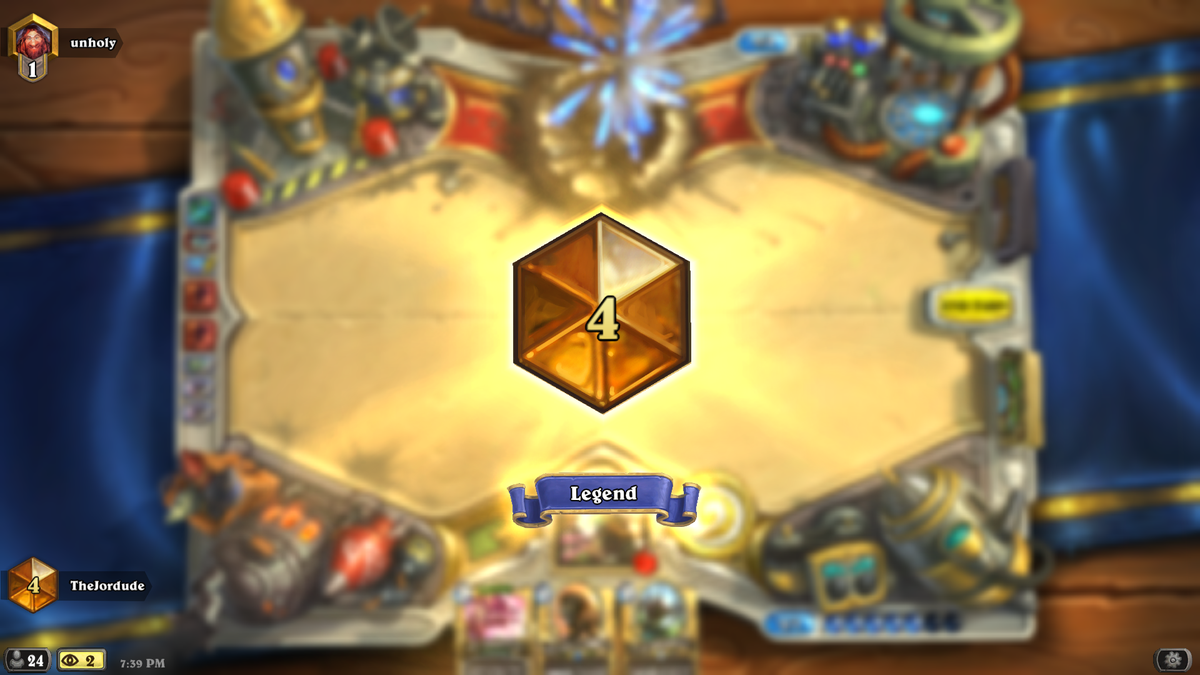 How to pilot this deck

A lot of people will tell you that Hunter is the easiest deck to play. I am one to disagree as there are many decisions you have to make with this deck, and any hunter deck to be honest.

With this deck, try to:

- Get board control as early as possible (by turn 6 max). This may require some aggressive plays to get this control... so yes you will have to trade minions, and use your spells and weapons

- Try to gain big tempo swings. Cards like Mad Scientist into Freezing Trap, Houndmaster, Hunter's Mark, Knife Juggler [/card], [card]Unleash The Hounds, Eaglehorn Bow and more all help you achieve this. Yes there is a lot! (That's why this deck is op)

- Try to be as efficient as possible. After say turn 3 or 4, really try to utilize your mana as efficiently as possible. Later in the game try to weave in your hero power every turn to maximize your damage and so you don't run out of steam so quickly.

- Know when to be aggressive. After a certain point in the game, you want to transition your board control into aggression. This can happen anywhere from turn 4 onwards, depending on your situation and who you are against. Against other aggros you may want to keep controlling the board, or race them. Against midrange/control you may want to be aggressive because you know you are running out of steam and need to kill them soon.

- Your power spike is from turns 2-6. If you can snowball your early game advantage and stay efficient, it is hard to lose.

Hunter's Mark - Can get a lot of value by either killing a big taunt such as Ancient of War, or simply just getting tempo by running a Webspinner into an annoying threat like Druid of the Claw

Webspinner over Abusive Sargent or Leper Gnome [/card] - Webspinner synergizes well with [card]Kill Command and Houndmaster. It can also get you amazing beasts like Savannah Highmane or Stranglethorn Tiger for later in the game or filling the curve better. You are playing for control, you don't have as fast of a game plan where you would play aggressive cards like Leper Gnome which doesn't provide you much in the longer run.

Freezing Trap - Huge tempo card when played at the right time or brought out by Mad Scientist. If you also manipulate the board to isolate a minion it is also good

Snake Trap - Can bluff as an Explosive Trap or Freezing Trap which can really mess up their plays. When it goes off, the snakes are very useful for getting board control by trading against aggro minions, or combining with Houndmaster, Hunter's Mark or Kill Command

Haunted Creeper - Strong, sticky 2 drop that's a beast and can normally stick around as a great target for Houndmaster

Ironbeak Owl - There are so many targets to get a good silence you would be crazy not to run an owl.

Mad Scientist - Can't play secrets without this card, absolutely broken. Also you have 3 secrets so there is a lower chance this card is dead if you open up with a secret in your hand

Eaglehorn Bow - Great weapon to clear minions for board control. Can also get a lot of face damage in, especially when you get secrets activated

Animal Companion - Anything you get off this card is good

Kill Command - Helps you get the reach you need to finish off your opponent, It can also be used as removal as it is very efficient

Unleash the Hounds - A lot of people cut 1 UTH. But I REALLY like 2, there are so many times where this card is very useful. Either for reach for lethal, dealing with a big board and comboing with Knife Juggler, getting value off Houndmaster. A lot of decks right now fills there board, which is why this card at 2 copies is good right now.

Houndmaster - 2 copies are really good in my opinion because you will normally always get the battlecry off since you have so many beasts that are sticky enough to last.

Piloted Shredder - An alternative turn 4 play when you can't play a battlecry Houndmaster. Very sticky minion that fits in all midrange decks.

Savannah Highmane - Best minion in the game. Can't be BGH. Sticky. 2/2 leopards are great. The Kappa rule is that if you get a hit to face with this card, you are probably going to win the game (seems to be true every time though)

Dr. Boom - Boom bots op. Applies a lot of pressure. Helpful when you are running out of steam or when played on curve on a follow up of Savannah Highmane

Sludge Belcher - Solid 5 drop, just not my preference in this deck as I feel it doesn't apply enough pressure

Explosive Trap - Good when there is a lot of aggro and would replace Snake Trap. I feel this card is a bit weak in this version of hunter though.

2nd Quick Shot - 2 is fine and replaces Snake Trap or 2nd Piloted Shredder. I don't like the 2nd one right now because it doesn't develop your board and is awkward when you have 2 in your hand.

Glaivezooka - Good weapon that can punish some plays, but a lot of times I find it awkward when I want to playEaglehorn Bow on 3 but have to waste a Glaivezookacharge

Always try to get:

Consider keeping based on your matchup, have the coin, how your hand will curve:

Normally depends on the draw, how efficient you are, and if you can gain early tempo. However if you're against face, you are unfavored.

Midrange versions of Hunter are favoured against control. Patrons however will depend on how well you can get the control and apply enough pressure early in the game before they can draw a bunch of cards and combo you.

If against tempo, the matchup really depends on the early game tempo swings and board control, like the Midrange hunter mirror. Against Freeze, it really depends if you get a good Loatheb turn as well as applying enough pressure early on.

Against mech or midrange, I find you are favoured because you get good tempo swings, Shaman gets behind from overload, and they have no heal.

Against aggro, Unleash the Hounds win you the game, get that and you are favoured. Against midrange you are favoured, again from good tempo swings and early board control. They have a much better chance when opening with a good curve from turn 1 or 2.

Priest's are usually slow in the early game which allow you to get the board control and apply a lot of pressure, forcing them to have clears. Pirest can be unfavored for you if they open up with a Zombie Chow

Freezing Trap seems to really hurt Rogue. You can normally out tempo them and apply enough pressure and damage that they can't come back.

All matchups are favoured either because you get early board control and pressure against slow Warlocks. Or against Zoo they build a big board and you win from a Knife Juggler, Unleash the Hounds. Your secrets are also important against warlock.

You will normally out tempo the Druid and just pressure them with a strong board that they can't come back. They have to open up with Wild Growth or Innervate into a good curve to win.

That's basically all I have to say for this deck. If you don't seem to find success for this deck for some reason do not give up. This deck does require some practice so that you can really fine tune your decision making. There are always quite a few options during a lot of your turns, so it may help to look back at your games to identify them and confirming which was the best.

I also provide private coaching for anyone that prefer individual guidance to improve. If that is something you would be interested in just send me a private message here and we can go on from that.

Have fun being a dirty Hunter and I'll see you on ladder!

*Update: no longer 100% win rate, the streak has been broken while trying to climb to #1 NA. However i have some youtube videos up playing this deck in the top 10 legend level for those that want to see but don't want to go through the VOD

My midrange vs face hunter: https://www.youtube.com/watch?v=Rw5PO4Iwh14