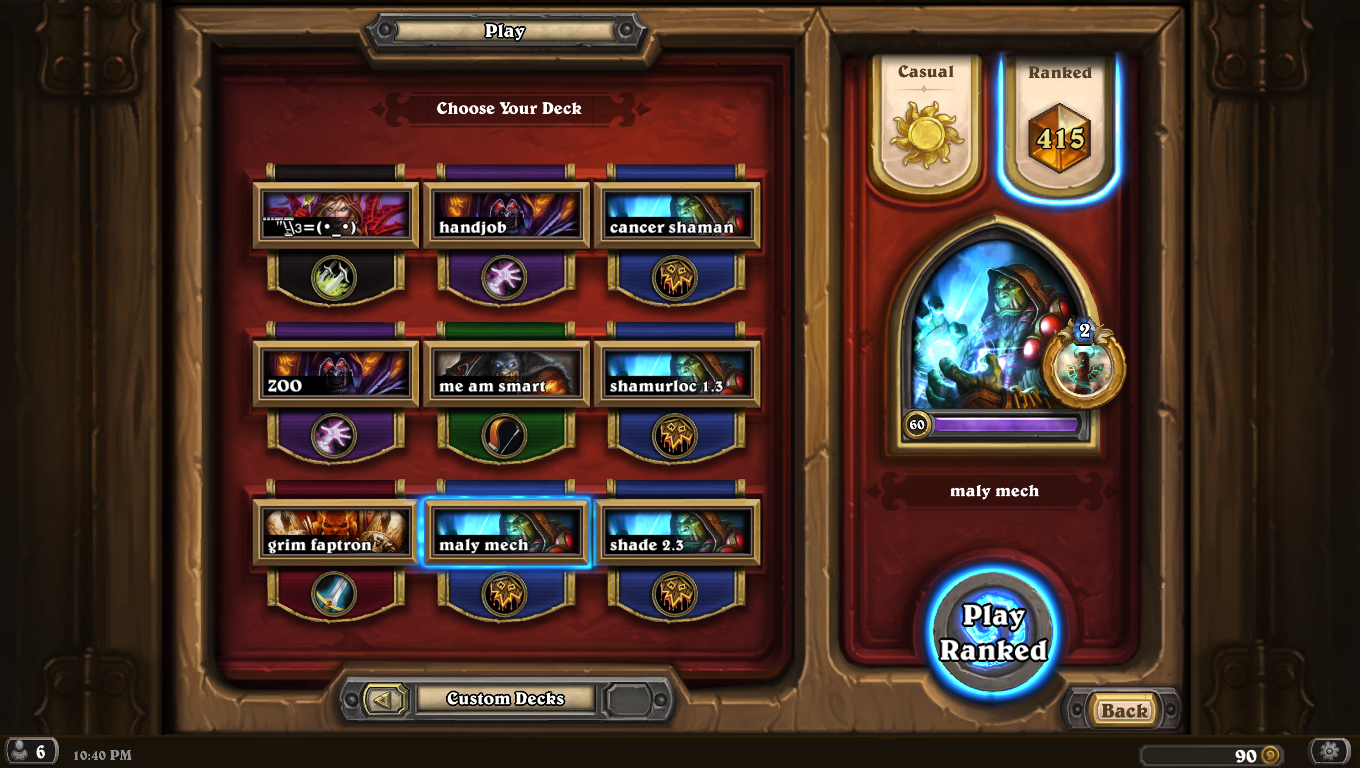 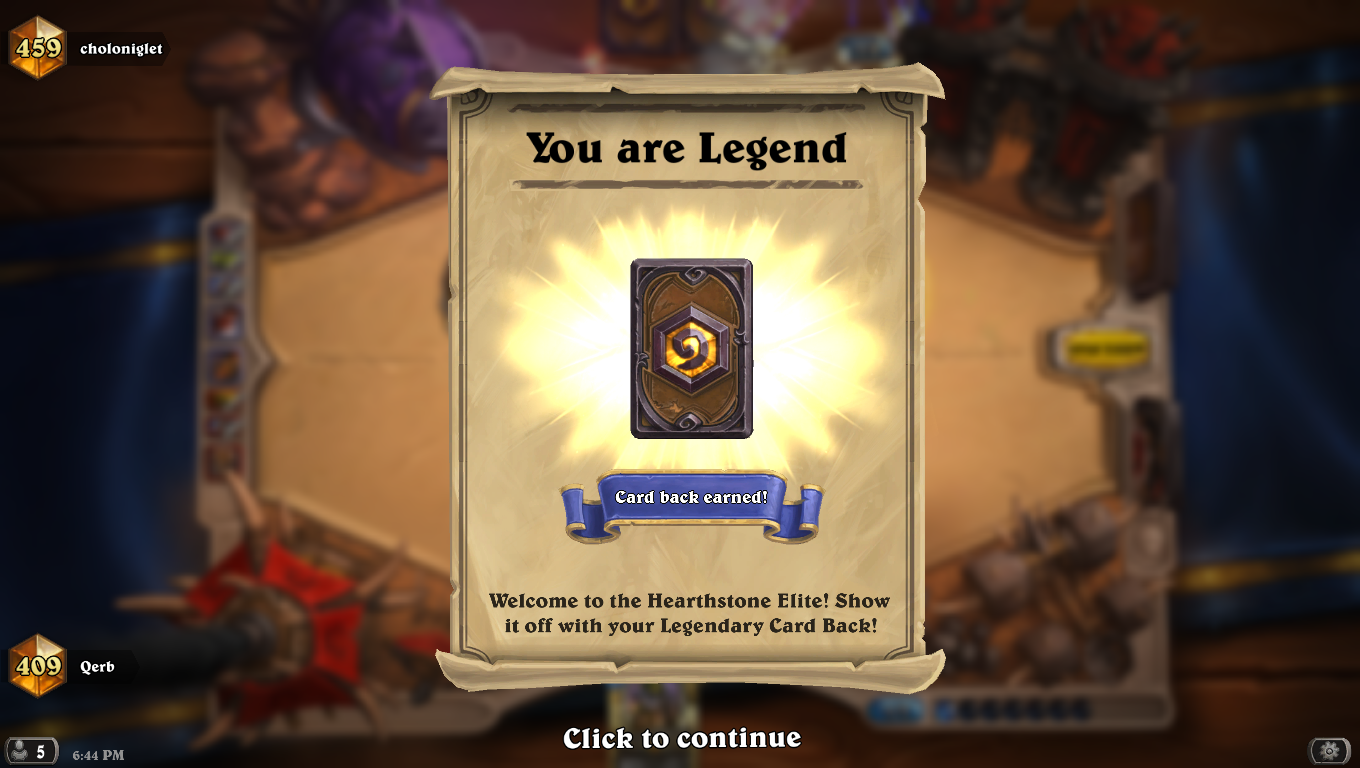 UPDATE (12/15): The Reno list didn't quite have enough card draw to play consistently. Also the meta has a lot of aggro atm, so this new list is faster-paced and makes use of a lot of discover mechanics with Jeweled Scarab and Gorillabot A-3 to keep your hand full and deal with the board more efficiently. Brann Bronzebeard comboes nicely with these as well as with Dr. Boom, Absusive Sergeant + Big Game Hunter combo (could replace Hex with second BGH, i just teched in hex cuz too many paladins with tirions on ladder tbh). Brann also combos with the rest of the list.

I wanted to include Rumbling Elemental but I would either have to sacrifice card draw/hand fillers or AOE clears to make room for it. It seems to be a bit too slow for the meta currently, but perhaps it could sill be considered.

Malygos with double Lightning Bolt and Lava Shock is a great surprise lethal against control decks. Don't hold on to your burn spells against aggro, having room to get ahead on board is important as opposed to constantly having to react to your opponent.

UPDATE (11/17): omg this is so much better with Reno Jackson Kreygasm

UPDATE (10/31): tested the deck for several hours in the past few days. it's not as strong as it used to be, so i made it faster and slightly less mech-centric removing the mechwarpers, they just die too easily and don't speed up the pace much. added another AOE and thalnos for some easier board controls. foe reaper reks mysterious challenger and friends which is good, malygos + earth shock is hilarious against tirion. the tempo seems to be a little stronger now with tuskar totemic. not too sure about ancestral knowledge yet, but so far it's great to use along with 2 lava shocks as i've replaced one azure drake with it. it pained me to remove a crackle from the deck but i think it was worth it. going to keep testing.

Hello, I hit legend for the first time this season!  I'm not gonna sit here and pretend that I used this deck exclusively for 10 ranks to get to legend like I notice a lot of people on this site tend to do for attention.

However, this deck was a big part of my 4 deck rotation which consisted of a fairly standard mech shaman, standard demonzoo, whispering shade shaman, and this mech-maly shaman deck. I did however use this deck almost exclusively between ranks 5 and 2, with the exception of daily quests. I'm sharing this one because I think it's my favorite list I've made in a while.

The main reason I made this malygos deck a mech-related deck is Powermace. I think it's one of shaman's best cards, and not using it to its full potential with the mech buffing death-rattle is too strong to not to use.

Explanation of the unconventional cards and why I included them:

I chose Arcane Nullifier X-21 over Piloted Shredder & Mechanical Yeti because it has taunt and can't be targeted by spells like frostbolt/ fireball/ kill command/ quick shot/ implosion/ execute/etc. Shredder & Yeti make your face too vulnerable to continue to late game against aggro, which this deck relies on getting to. It can be argued that Ironbeak Owl "nullfiies" this card (hueh), but even if that's the case, a 2/5 minion is still better than a 4/3 shredder minion for trading with cheap hunter/zoo minions, which is overall shaman's most exploitable weakness.

Annoy-o-Tron and Arcane Nullifier X-21 protect your face as well as your Mana Tide Totem [/card] early, as you  want to get as much card-draw off of this as possible which is essential to draw into your combo pieces. They're good against aggro hunters/zoo/cancer-pally (which is for some reason really common right now ) Also them having divine shield/not targetable respectively is great synergy with [card]Powermace.

Earthen Ring Farseer is good for a early minion on board and an additional heal. Also helps keep your Arcane Nullifier X-21 alive to trade multiple times, or can keep a power-mace-buffed annoy-o-tron alive. Helps somewhat alleviate shaman's struggle with cheap early minions.

The main reason I decided to try out Foe Reaper 4000 is because he was initially replaced by Dr. Boom of course. However, Dr. Boom was the only BGH'able (Big Game Hunter) minion in the deck, and I was essentially paying 7 mana to summon 2 boombots every game which, don't get me wrong, can still potentially be very valuable if RNGesus is with you. However, having no bgh'able targets, and being able to deal with "tempo BGH's" is very easy to deal with having Lightning Storm and minions and weapon that can easily trade with him. Additionally, Foe Reaper 4000 does get the cost reduction from Mechwarper and is valuable for clearing patron boards, however you have to be wary of execute and try to bait warrior to use them on your Azure Drake and Fire Elemental before throwing him out.

Save Emperor Thaurissan until you have at least a combination of 2 of either Lightning Bolt, Crackle, or Malygos in your hand.

I think everything else is fairly standard in here.

EDIT: thanks for the positive feedback. hopefully i can come up with more unique/satisfactory decks like this in the future.

Against Aggro decks (hunter/zoo/cancerpally), use your burst damage cards more liberally. Malygos will much less likely be a legitimate win condition against these decks.

Against control decks (Ctrl warrior, handlock, malylock, priest, frz mage, etc) focus more on card draw and not necessarily controlling the board continually, but more-so not letting the board get out of control.