Hello everyone, once again I come with a new deck. This one however is different than the ones I've posted before. This is basically the classic Oil Rogue archetype, NEW and IMPROVED. Atm I'm sitting at rank 124 Legend (I was higher earlier) playing exclusively the last 3 days this Oil Rogue variant. 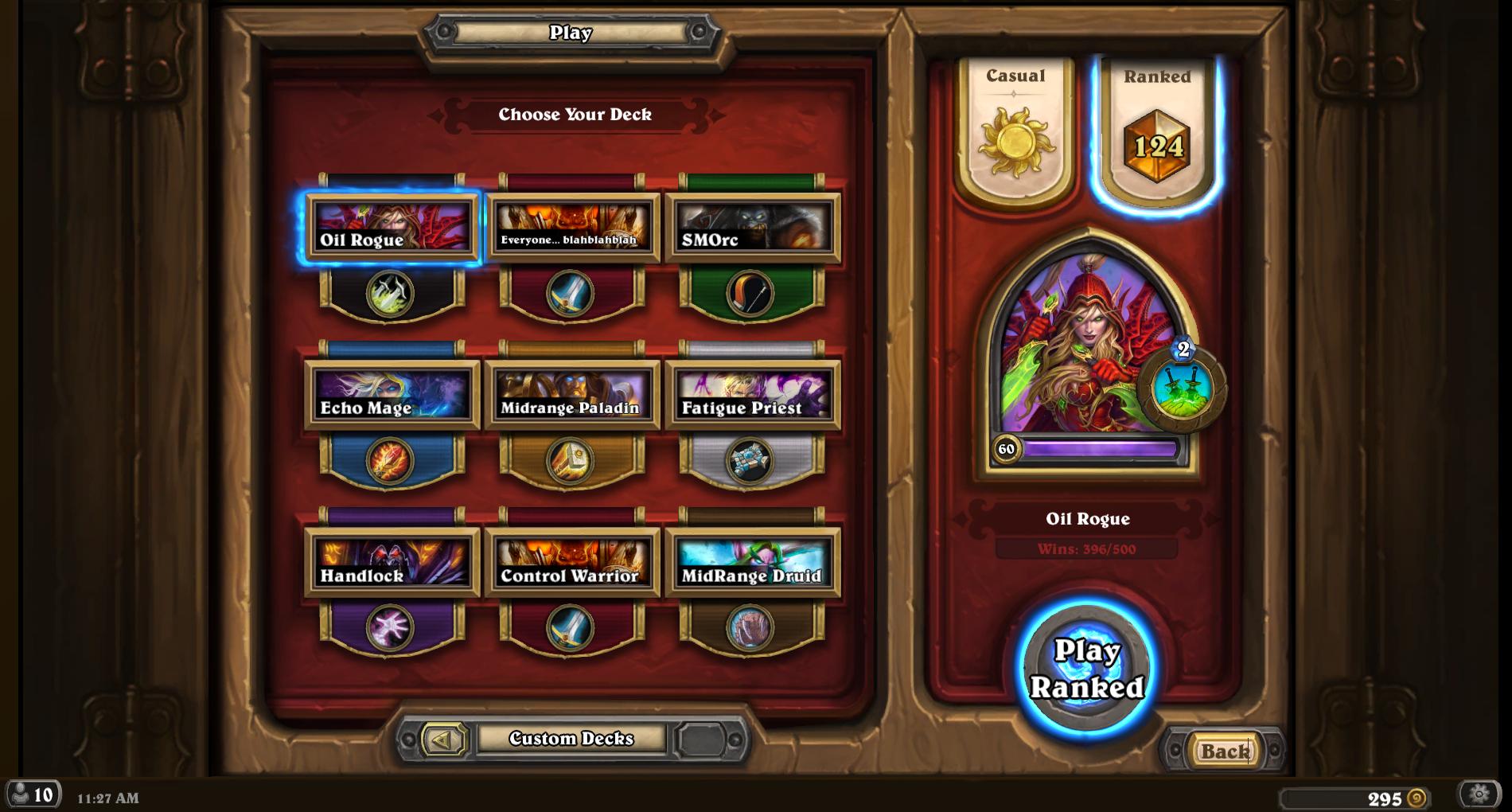 I'm not going to write a guide about Oil Rogue. I assume there are enough of those already on the Internet. Also just by watching streamers / playing the deck yourself, you should get a pretty good idea of what the deck does best and what the general strategy is. Instead I'm going to explain my card choices, which is probably what most people will wonder about when they first see the deck.

To preface my card choices, let me explain the thought process behind them first. Oil Rogue is a combo deck. Yes we know that. But it is also very much a tempo deck. In the early stages of the game, its all about tempo. Denying your opponent the board while establishing your own. For that reason I was always kinda wondering how do Earthen Ring Farseer and Antique Healbot help accomplish that. Obviously since we're using Hero Power to make efficient trades, in the midgame its highly likely that we're gonna be at a low hp. However there are 2 ways to win a game. You can survive against your opponents threats by defending yourself or deal enough damage yourself to end the game before your low hp is even a problem. I feel like Earthen Ring Farseer, Fan of Knives, Antique Healbot are cards that help you stay alive but have otherwise no synergy whatsoever with the rest of the deck. They provide no tempo and usually don't help us close the game. With that in mind:

Since we're using our hero power on turn 2 95% of the times, Dread Corsair is at worst a 3-3 taunt for 3 mana. It still protects us against aggro, it can help protect minions buffed by Tinker's Sharpsword Oil and can be played for 0 or 1 mana later in the game with a buffed Hero Power to provide tempo.

I think this card is amazing in Oil Rogue. Helps us combo Tinker's Sharpsword Oil really easily compared to other Rogue lists, and also gives the deck extra removal in the early game. Another really big reason in current meta why this card is really good is Secrets! Great vs Mirror Entity and Freezing Trap.

Rogue is the ONLY class that has spells/cards that synergize with an equipped weapon (except Upgrade! that no Warrior is using). Even classes that have weapons, can't take massive advantage of the equipped weapon other than just using it. ON AVERAGE you're gonna get a weapon which will be equally strong with your opponents. However since you're a Rogue you can take advantage of your weapon much better than your opponent. Deadly Poison, Tinker's Sharpsword Oil, Blade Flurry are all cards that can help us take advantage of our equipped weapon immediately with great effect. This card at the same time provides a nice body 3-4, while also being able to destroy extremely powerful weapons like Ashbringer or Death's Bite from your opponent. Even the worst case scenarios for us, like Light's Justice, have amazing synergy with Deadly Poison or Tinker's Sharpsword Oil. I was originally running Assassin's Blade but felt the card was a bit too slow. At least with this card we also get a body on board even if our opponent uses Harrison Jones on us.

After tracking my games, I realized that 80% of my games were vs classes with weapons which are very popular in the current meta. Also Handlock is a very popular deck in the current meta. This card is really good against Handlock on turn 4. The "synergy" with Blingtron 3000 is there, however rarely relevant, but in this deck Sabotage is much easily comboed because of Dread Corsair and Southsea Deckhand. It's definitely a card that can be cut, but up to this point I've been pleasantly impressed with this card. One last point is that this card is actually good vs Dr. Boom as long as you can take down the Boom bots which is a card Rogue struggles with since Dr. Boom is not a good target for Sap.

That's it for now. I will update the deck with Videos/Stats/Guides if the deck get Upvoted/Liked. I will also try to answer any questions posted in the comments. Try the deck for youself, see how perform, and let me know in the comments! THANK YOU!