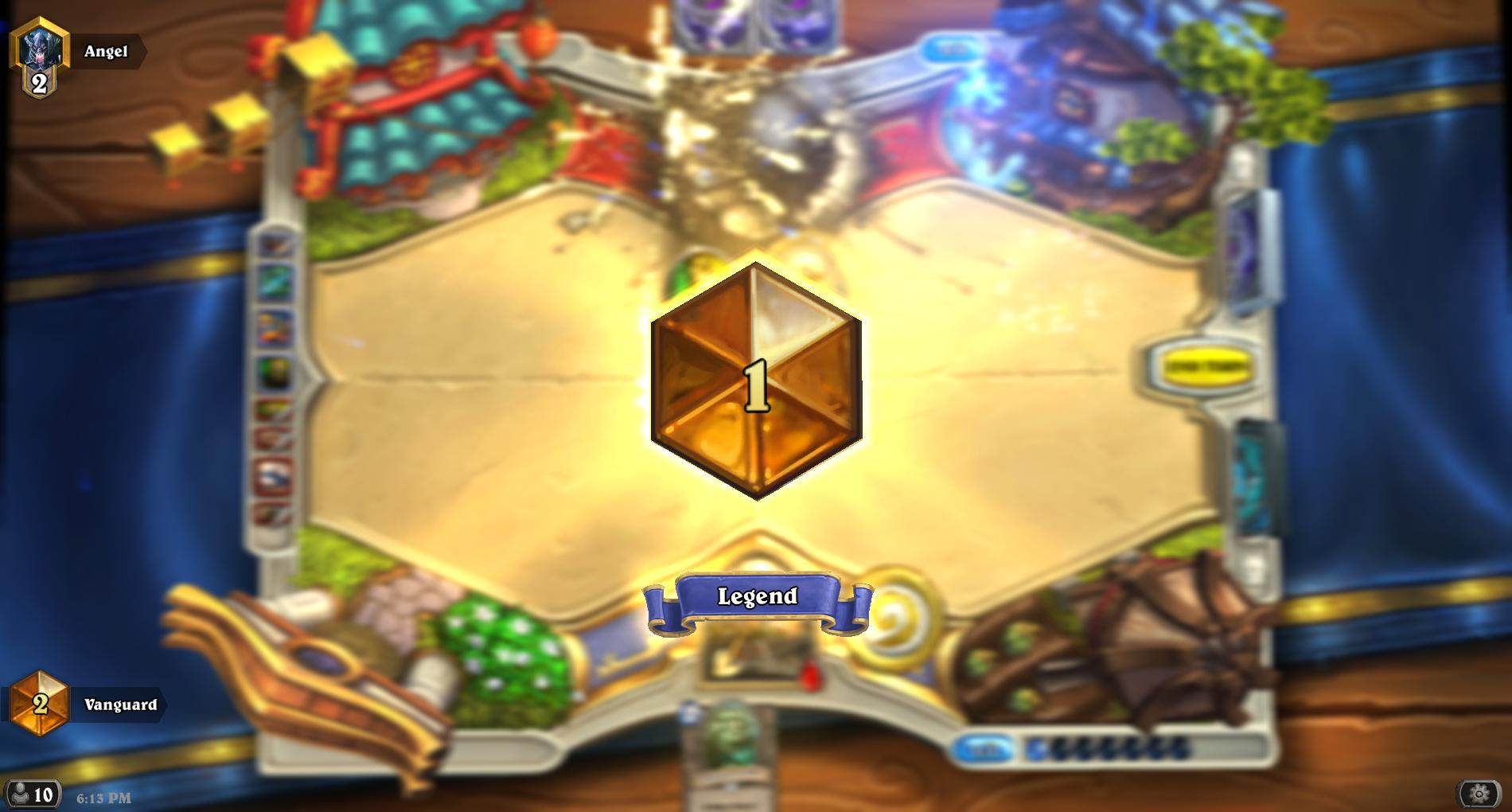 Update:  Thanks so much for the support everyone!  Guides for all the match-ups are posted, enjoy :)

Keep up the +1's and comments and I'll try my best to help you all bring this deck to legend and beyond!

Hey guys, this is the deck I used to climb from rank 1 to legend and then within legend from ~rank 80 to the very top, rank 1!  Also, this was not just one nice win streak, I played probably around 50 or so games at legend and the deck consistently worked very, very well.  So, I'll start off with an explanation of some of the card choices that are somewhat unconventional for a face hunter.

No Coin- If you don't already have any 1 drops, mulligan everything.  If you have a 1 drop and its not Abusive Sergeant vs. mage, then keep any 2 drop other than owl and any 3 drop other than arcane.

Shaman- I honestly didn't play any shamans with this deck, but I'm guessing around 70/30

Hunter- 60/40 I put this under good match-ups because I actually went ~70/30 vs. them.  I don't think the deck is inherently super good in the mirror, but if you know your stuff, you can outplay most of the other hunters on the ladder.

Let me preface this by saying while I do write "Just go face" there are obviously a few exceptions.  If you have a super great trade like you have a leper gnome out and your misha is a 3 hp and your opponent only has a 3/2 on board, trade the leper gnome.  However, it is called face hunter for a reason and trading is usually not worth it.

Zoo Lock-  Normal Mulligan.  There’s not much to this match-up, just go face as much as possible and try to maximize the power of your unleash or explosive trap if they manage to get a board against you.  While it may be tempting to make a trade because it looks efficient, zoo will be able to replace the lost minion a lot easier than you can, so just try to kill them as fast as possible.  Owl should be used on voidcallers or minions taunted by defender of argus, usually using it on an egg is a bad idea, unless there is no other good play.  If your opponent has low HP and it looks like you can kill them in the next couple turns but they have a voidcaller out, don't summon a minion that will allow them to kill their voidcaller because mal’ganis can lose you the game.  Usually I’d save the arcane or whatever it is until you can actually kill them, however, use your judgement.

Handlock-  This is usually a pretty easy game, unless they draw really well.  Just try to get an early lead on them and keep a lot of minions on board.  When you’re getting them close to 15 or so health,  next turn you can use all that attack on board to get them super low on hp and take them out quickly after those moltens are dropped.  Don’t take him below ~12 hp unless you can get them to 4 or lower or if u can kill them with in-hand damage the next turn.  Hero powers are much less important than board control in the beginning.  Also, keep a weapon charge for the turn where you push them below molten range, don’t just use it on turn 4 when he’s still as 20 hp.

Malygos Lock-  Approach this like a full out race because they don't have moltens and getting them to low HP won't hurt you.  Be efficient with hero powers, but don't miss out on an opportunity to really gain on them with an extra minion or 2 out on the board.  Don't overextend into a turn 3 hellfire the turn before and kill them before they get too many (or any) sludge/healbots in their hand.

Paladin-  Not much to paladin other than go face, don’t trade too much.  Don’t overextend into a turn 4 consecrate on the turn before.  Don’t use arcane until lethal unless it's a super obvious tempo play because it will get them to that 8 mana lay on hands earlier.  If they get to a lay on hands, you lose 90% of the time, so kill them before that.  Unleash or explosive usually deals with Muster for Battle, if you do unleash after a muster, go face with dogs unless it's likely they have a quartermaster for the next turn (so not on turn 3) and you don't have an explosive up, a scientist on the board, or an explosive in hand.

Shaman- I haven’t seen a shaman in ages, but just kill mechwarper if he gets one out early and kill whirling zapper asap unless your going to win easily by just going face.  Easy win most of the time.

Hunter-  Hunter mirror is decided by who can get ahead quicker and/or who can get an awesome board clear with explosive.  Unleash can also be super useful in the mirror to kill 2/1’s and go face with the rest.  Don’t fall into terrible explosives and make your opponent fall into them.  Honestly, I think explosive trap is the most important part of the mirror, but if you can get out a bunch of damage in the first few turns, you’re going to win 90% of the time.  Use owl on enemy scientists if you get the chance.

Patron Warrior- patron warriors are usually pretty weak and can't do much but bring out a couple 1 hp minions, armor up, and maybe bring out a weapon until around turn 8.  However, when they get to turn 8, they kill you very quickly, so you pretty much gotta kill them on or before that turn.  Typically, just go face most of the time, the only time you want to trade is to kill a armorsmith if u have a creature that can 1 shot it.  Sometimes you will want to kill a berserker, but if it appears they're going to have to use it defensively, just go face.  Here are a couple tips- If you're going first and u have a choice between 1 drops, always go with the worgen so that they can't get the coin taskmaster kill for free.  If they summon an armorsmith on turn 2, the best thing to do is to use animal companion because huffer can take it out and still be a threat on the board and misha can stop her from taking out your smaller minions while gaining armor, hopefully you don't get a leokk.  Other than that, they don't have a good board clear for anything 2hp to higher, so try to get a bunch of stuff on the board and just get him down as quick as possible.

Priest-  Priests are funny- sometimes they die on turn 6 because they can't deal with you're board at all and sometimes they seem to have every answer.  Try to kill the cleric asap so they don't draw into more answers and then just go face, not much more to it.

Mage- Tempo mage is one of the most difficult match ups for this deck.  This is mostly due to their ability to clear your board easily and efficiently time after time again with cards like flamewaker and arcane missiles.  While I'm not sure if I've quite mastered this match up because I did only have a 50% win rate against them, I'll try to help out to the best of my ability.  So, try not to let this make you give up, but the game is often decided by who gets the coin, firstly because a flamewaker with a coin into a 1 mana spell is almost impossible to come back from as a face hunter, but also because this match up is often decided by who has more cards in their hand that will be able to keep up pressure until the very end.  So, as for actual game play, use the normal mulligan guide except when going first, don't keep an abusive sergeant in your hand because they will kill it with hero power for free.  Try to put very high pressure on them and take board control as quick as you can.  If you can get the mage to ~15 hp or so before they really get going, you can usually just full on race.  However, if it appears that you can't outpace your opponent, when they bring out a sorcerer's  apprentice or a flamewaker, it may be worth it to trade or even quick shot or kill command one of them if they're being protected by those pesky 0/2 taunts.

Druid-  Druids suck.  So many taunts and heals, its just rough.  Go face as much as possible and hopefully they don’t draw all their taunts when you don’t have an owl in hand.  Don’t overextend with 1 hp creatures before turn 4 swipe the turn before.  I didn’t have very good win rates against druid, but it isn’t impossible to win, you still have around a 40-50% chance I would say.

I'm going to attach my win rates from the entire season with this deck, but because it is a small sample size, not all the ratios are the same as what I wrote above.  They're pretty close though:

If you don't already have Leeroy and you don't find him to be worth crafting, a second Unleash the Hounds is most likely the best replacement.