June 18 - Deck is still working. Just climb from rank 3 to 2 winning 6-1.
June 14 - If you are facing a lot of Hunters/Mages.
( - 1 earthshock, -1 harvest golem, +1 clockwork gnome, +1 Kezan)
June 8 - Added a card substitution section.
June 7 - Added a Video of Me explaining the deck.
June 6 - FYI - A lot of your recent questions had been answered in a previous comment post. Please refer to earlier comments, especially about Fel Reaver.
- I will try to create a video soon explaining the deck and replacements.
- Thank You ALL for all the UP Votes!!!!
June 5 - Additional comment added in Tips section.
June 4 - Added a video of my deck
June 3 - Thanks for all the up votes!  I added a mulligan and tips section.

I know the title looks misleading but it's true. I had an insane win rate from rank 3 to Legend.  I might have also been the luckiest guy but let me explain why this deck worked. 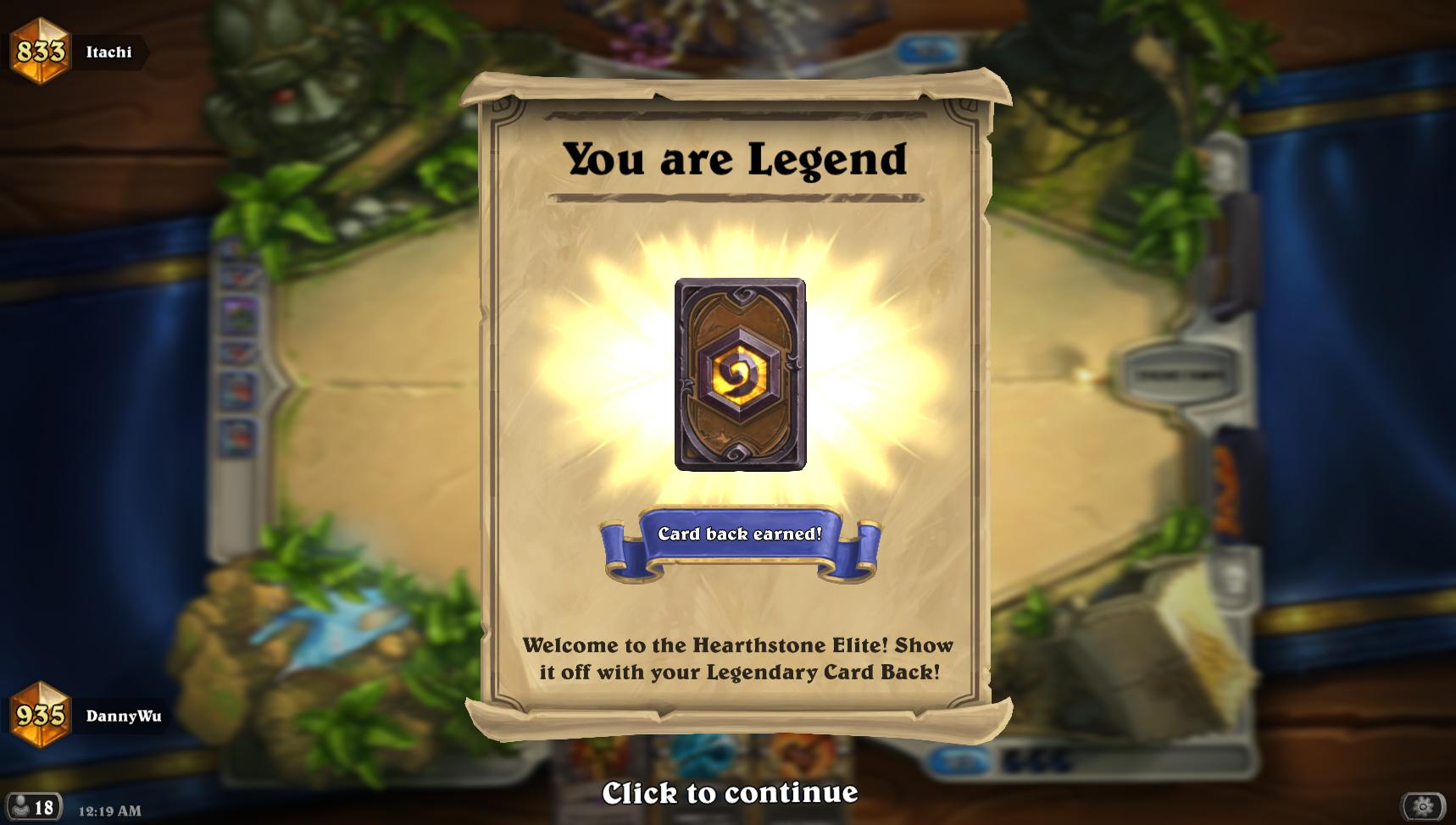 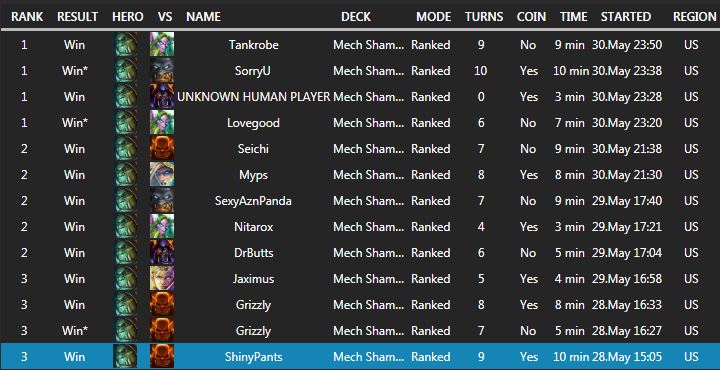 First, I would like to detail my background a little. I started playing last May and besides the first two months, always been consistently rank 5 or better. I didn't have the time or energy to grind it out to Legend.  This season was the first time I've achieved Legend.  I was actually not planning for Legend this season but the deck just worked extremely well and got me there.

I was using different decks to rank 4 and 3 this season when I saw a shift in meta where there were more midrange/tempo and control decks appearing to counter the amount of zoos and hunters.  I decided switch to Mech Shaman to counter those decks.  Mech Shaman's pressure and progressing board presence with beefy minions performs very well against most control decks (Warriors and Handlocks, etc.).  It's also good against Mech Mage (faced one) since shaman Mechs out values theirs.   The weakness to Mech shaman according to Tempostorm were Zoo and Hunters.  I faced a few but were able to pull off wins against them.  Against them, it's all about the start and if you can get your early 1 or 2 drops, you can win.  Rockbiter is good if you have coin. My matches against Hunters were Very Close! Fel reaver/bursts helps A lot.

Why two earthshocks?
- Pros - Helps against Twilight Drakes, Taunts, Mad scientists, Eggs, even a leper gnome/loot hoarder.
- Cons - Sucks have have two in your hand. You can replace this card with another mech, flame tongue, or Ragnaros.

Why Fel Reaver?
- Fel Reaver is a great body for 5 mana.  The discard/burning of cards is not a huge drawback since you will win the game most of the time without going through your entire deck.  Even if your opponent have a removal for him such as bgh, hex, siphon soul, execute, they would have wasted their removal and you still have big dudes coming in such as fire elemental and dr. boom.
- Play Fel Reaver as soon as you can and hopefully on curve (turn 5 or 4 with mech warper).  Try not to play two Reavers at once. You will fatigue fast in that way.
- Weaknesses - cheap taunts (mirror image, annoyatron), sludge belcher, aldor peacekeeper, and bgh.

General Mulligan:
- Mulligan for 1 or 2 drop minions or a nice curve such as 1 drop, 2 drop, then 3 drop minion.
I usually won't keep a 3 drop minion unless i have something to play on turn 1 and 2  or if I have coin.
Priority cards are  Cog Master, Mechwarper, Annoy-o-tron in your starting hand then Whirling Zap-o-matic.

- Depending on the match up, there are situational cards I would keep in my starting hand such as Earth Shock, Powermace with coin, and Rockbiter Weapon(with coin).

Some Tips on how to play:

- You first 3 turns are very important. If you have coin, mechwarper and annoytron in your starting hand.  Don't coin mechwarper on turn 1, instead play mechwarper, coin annoytron on turn 2.    This way your opponents will have more difficulty removing your two minions on their turn.   Find ways to protect your mech warper or at least use its discount.
- Annoy-o-tron is a great card to protect your mech warpers, whirling zap-o-matics, and big minions.

- You want to play your minions on curve and do not hold back unless you suspect an AOE clear.  This is an aggressive deck, you want to be playing minions every turn.   If they do stabilize, you still have burst that can win you the game such as crackle, lava burst, rockbiter, doomhammer.

- Depending on the match up, you will need to control the board in the early turns,  This is not an all face deck. Once you control the board, your big minions will do their job and can kill the opponent in two/three turns.  *Don't use Fel Reaver to trade or attack their minions unless you need to prevent lethal, 90% of the time, he attacks FACE.*

- Power mace is a great weapon to gain tempo, it usually clears two enemy minions and can give your mechs a buff.

Additional comment added June 5th
- I just watched my friend play this deck and now I understand why some people are having trouble with it. The Early Turns are extremely Important!  Sometimes they play themselves because of your starting cards, but there's definitely some decision making for optimal plays and what to trade and how.  These are the tough decisions when you don't have an optimal starting hand.  It can win or lose you the game by turn 4.  Unfortunately, I can't elaborate more since it's depending on the match up and what minions your opponent have on board.  As stated above, this is not an All Face Deck. You need to control the board in the early turns.

Here's a video of a Hearthpwn member playing my deck on ladder.

WOW! Made it to Deck of the Week Twice! Thanks Everyone! 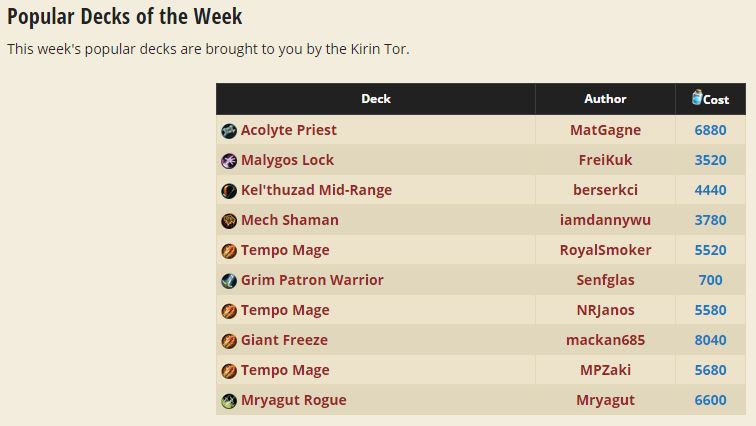 If you want a more detail match up guide, please like/thumbs up or click on the Plus button.

Thanks for reading.  Feel free to ask questions below.