Hi guys I'm Steef and I'm back with another legend rank deck! You may remember me from my Illidan Mech mage deck a while ago. http://www.hearthpwn.com/decks/210592-top10-eu-illidan-mech-mage

This is a midrange shaman deck that I used from rank 5 all the way to legend rank 22 at the peak (proof: http://imgur.com/a/Fui72). I believe shaman is currently very underrepresented when in fact the deck does reasonably well against the current meta decks. If you like the deck please upvote! i'll be answering any comments or questions :).

As you can see below from data over 100+ games at legend with the same deck there is a positive winrate over every class bar priest and you can watch me play at http://twitch.tv/steef_plays 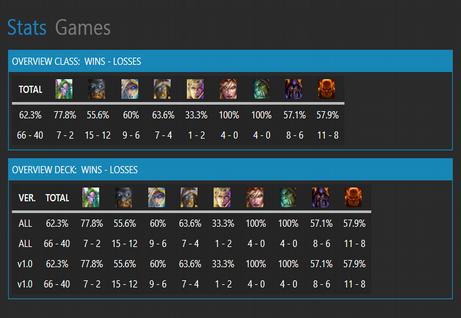 The deck isn't that different to most midrange shamans but I'll go through key cards and why I made the choices I did.

1x Zombie Chow  We need more early game as you can't always get a haunted creeper draw and zombie chow is a great choice. It can also be comboed out with defender of argus on turn 5 with a totem on board.

Earth Shock - Some run only 1 but i feel 2 is far better in this hunter/zoo meta. There is just so many targets at the moment: eggs, spiders, void callers, mad scientist, even leper gnomes and wolf riders. In other match ups the card allows you to trade a zombie chow with a shredder, or just stop an acolyte of pain.

Crackle One crackle I feel is really useful. Sometimes you take a gamble and lose but other times you take out an ancient of lore for 2 mana, without having to trade into it. This card also helps unclunk your hand. Say it's turn 3 you have in your hand feral spirits crackle and shredder. You can now play feral spirits on 3, crackle on turn 4 to kill something and then play shredder on turn 5 being very mana efficient. It also gives you the extra reach you need to win games or take out something behind a taunt.

Feral Spirit Some people are questioning these dogs as of late and the overload really can be a killer. However they are good early game against hunter and zoo and good late game against other classes to protect your big drops while you punch them in the face.

Big Game Hunter Dr boom is in nearly every deck, you basically need 3 hexes against most classes now and this guy functions great as efficient removal that will nearly always find a target.

Piloted Shredder - This or fireguard destroyer what's better? I tried both though admittedly turned off from destroyer pretty quick. I just hated being overloaded when i wanted to play something turn 4 or 5. BUt chancery reached top 10 NA with destroyers in a very similar deck so see what works for you. I also feel shredder is better with defender of argus and destroyers can get bghed sometimes which is a big swing in early game.

Loatheb This is a tech choice that can be subbed for harrison or sylvanas etc. I prefer loatheb currently as he's just so useful at protecting your board for a turn to set up a kill.

Doomhammer Your 1st win condition coupled with rockbiter. This card is so good for setting up lethal as even without rockbiter that's 16 damage you can hit to the face. In a lot of situations you will be overloaded for 2 so Al'akir rockbiter simply isn't possible, but doom hammer provides the burst needed to race hunter for example. Harrison is also rarer now as with new dragons and Emp Thaurissan he's getting cut due to lack of space.

Antique Healbot This is better than taunt against hunter and with doomhammer you will be taking face damage. Great for removing you from burst range.

Dr. Boom He is overpowered, and bombots have great synergy with flametongue.

Al'Akir the Windlord 2nd win condition, also helps 2 for 1 in control matchups or zoo, and protect you against hunter as a late game taunt. While he can't really be replaced as he fills so many roles try neptulon, ragnaros or another big late game creature.

Even matchup. This deck fares much better against the new hybrid hunter than it did vs face hunter. The first reason being they usually only run one unleash the hounds, the second being that they have highmanes. While those beasts are scary for other classes we have 2 hexes and 2 earthshocks allowing us to easily deal with them. You need to lay fast here - usually it's good to coin a creeper out even with no turn 2 or 3 play. Fight for board control, sweep with lightning storm and switch to aggression and race them down.  Playing around traps correctly is important, use flametongue to push totems into a freezing trap, use argus to escape explosive trap and ignore snake trap until you have lightning storm. A final small tip is that you can usually force them to use their final bow charge by putting mana tide or flametongue even onto an empty board.

Zoo: Even matchup. Earthshock all the things! Fight for board control early and try to use storm at an opportune time and not waste it clearing 4 imps. Save hex for big things and don't pop void callers unless you can deal with a doomguard or mal'ganis. Sometimes they get the dream and there's nothing you can do but sometimes so do you. Pressuring them is key, but don't throw everything down trying for lethal without being able t deal with mal'ganis.

Handlock: An easy matchup, you have earthshock for drakes, bgh and hex for giants and plenty of burst. If you have no way to finish them off if they drop a taunted molten giant don't get them low until you do. Watch out though - sometimes they run a acidic swamp ooze so be careful with doomhammer.

Control: Used to be a free win and still is heavily favoured for the shaman, but the more dragon oriented ones can sometimes be problematic. Usually I play really slow building up a totem wall, dealing with their minions one by one. Don't play doomhammer unless they've already played harrison!  With dragon versions be wary, in the stats above I lost 3 games to control warrior because the one card they got from yesera before a hex enabled a ysera awakens clear into grommash kill. Nefarian is also a pain because nearly all your spells are good! They can get hex, lightning storm or burst spells to finish you off.

Patrons: To be honest this is a bad matchup, sometimes you just don't draw lightning storm to deal with patrons and a lot of your minions have less than three attack (that searing totem really screws you sometimes). The amount of minions on your board can be a real hassle with pumping up frothing berserkers after whirlwind.Try to kill off your creepers etc. before turn 8. Hexing the frothings is usually correct. The key strategy is denying card draw with earthshock and not letting them have damaged minions on board to use battle rage with. Loatheb is useful for shutting down key turn 6 or 8 plays.

A great matchup for you as unless they get a really fast start you should have board control and deal with their minions one by one. Hexing an innervated minion like a belcher or druid of the claw is usually correct. KIll off shredders with earthshock as there generally isn't a good target bar sylvanas.  Protect yourself from combo with taunts or heals. Generally emp Thaurissan is in their decks instead of harrison so go to town with doom hammer. Keep rockbiter at start for zombie  chow.

Mechs:  Even matchup, keep lightningstorm and remove mechs each turn if possible. The mirror entity secret is not an issue with minions like flametongue/mana tide totem, zombie chow and argus. This is all about board and damage control. Don't get into range of double fireball and you'll usually get board control and win.

Tempo: Favoured matchup, your totems really screw up flame cannon and again mirror entity is easily played around as with in mech mage. Kill of flamewaker asap and you should win. Don't play into a flamestrike - though most don't run one.

Freeze: Favoured matchup. Keep earthshock/hex for doomsayers over scientists. You've got doomhammer to do damage even while minions are frozen, you have burst with al'akir and rockbiter. You can deal damage from hand to proc ice block even with a frozen board via fire elemental and crackle and you have two ways of stalling after alexstrasza with loatheb and healbot.

Unfavoured matchup but easily winnable, try to trade efficiently, save an earthshock or hex for tirion, watch out for harrison and try to avoid letting them get a good quartermaster play. Don't over extend into an equality play and play around it by killing off small minions when playing large threats. If there is a single recruit on the opposite board for example on turn 8 i would play dr. boom and earthshock the recruit (if you have hex for tirion).

Hard matchup, keep earthshock/hex for velen's chosen plays. Hexing an injured-blademaster is good. Try not to play into a turn 6 cabal shadow priest and play around board clears. Be careful putting minions into lightbomb but at least totems survive.

Unfavoured matchup - remove minions to avoid easy oil plays, hex violet teachers, don't over extend into a flurry play. You can usually get them to use that last charge of deadly poison on a flametongue/mana tide totem like with hunter's bow. Play loatheb on key turns e.g. after sprint and heal up/ play taunts at the right time to avoid a face hit into flurry play. Be happy if they eviscerate your minions.

Mechs: Favoured matchup. You can usually gain board control with lightningstorm. Save earthshock for after a mech has been buffed with the weapon. Hex/bgh big targets and win.

Midrange: Play to counter yourself, earthshock creepers and flametongue totems, try and get good lightning storm clears. Capitalize on turns where they are overloaded. Doomhammer helps massively in the totem wars. Be aggressive.

Thanks very much for reading! If you like please give it an upvote and maybe i'll make a couple of video guides. If there are any questions or comments please feel free to ask :)