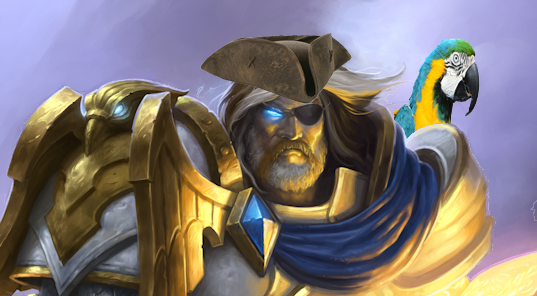 After reaching rank 5 earlier than usual this season I've been experimenting more with deck building.

In this meta I noticed Coghammer was getting incredible value from being able to prevent early aggression and make for 3/1 trades with Shielded Minibot. With the idea of weapons in mind, and also having seen how Grim Patron Warrior has been using Dread Corsair to great effect, I created this.

What's the deck about?

The deck is a more midrange take on pirates. You are not trying to rush your opponent down, although you if you have a good starting hand you can take advantage of the early game pirate synergies.

This deck is worth playing if:

How do you play the deck? (in 3 sentences)

Look for 2 drops in your starting hand (except for Captain's Parrot, he/she/it is for drawing late game/ when you start to run out of cards). Coghammer is also a good card to have early on if you know you can secure a minion on board. Dependent on class match-up hold onto cards such as Equality, Big Game Hunter etc.

First of all, use this deck as a template for your own pirate deck. Experiment and see if you can do better. There are many cards I haven't tested yet and I'm sure the current list can be improved on.

Secrets: are in the deck because I find the tempo swing from Avenge can be game winning. I chose to include Noble Sacrifice as well as it can help out early game or prevent large damage from legends late game, it also combo's with Avenge to buff the board) Mad Scientist is a strong 2-drop because of this and it is often helpful to bait out early game removal with this guy, and still gain some tempo by having a secret in play.

Captain's Parrot: is a good way of drawing a card that is guaranteed to be a fairly cheap minion, it's been working for me so far.

Aldor Peacekeeper and Big Game Hunter: are for removing threats as the game can often go far beyond turn 10+, however both cards still are good bodies (espeically when buffed by Sword of Justice)

Antique Healbot and Lay on Hands: may seem overkill but when you're running a lot of weapons you end up taking a lot of face damage.

Spiteful Smith: Works well with Coghammer, and buffs it into a 4/3!

Avenging Wrath: is what I prefer over Consecration, has much more reach against Warrior and Handlock, but is also a good board clear with equality or against a board of pesky imps and tokens.

I can't go through every card, but I'll explain why I left out certain cards that I tested:

Southsea Deckhand: was dying too frequently without Sword of Justice buff and the charge damage was not really needed.

Southsea Captain: doesn't do enough for 3 mana. So much weaker than Murloc Warleader and a horrible top deck.

Muster for Battle: Incredibly awkward playing around destroying your weapon with this card.

Video is of three matches, 2 wins 1 loss all recorded in succession to show how the deck works. The two wins against aggro show how the deck can keep up well due to the use of Coghammer. The loss was really fairly close, although the Lay on Hands Thoughtsteal sealed my fate. I carry on playing to see what order I draw, I've cut it out, as it's a waste of time to watch.

Thanks for reading, hope you enjoy.