I'm part of the Double Dutch Dragons team and climbed from rank 7 to legend in only 7 hours with this list. With a win rate of over 70% (Might be more, but I didn't keep track) I am currently rank 18 Legend on EU. 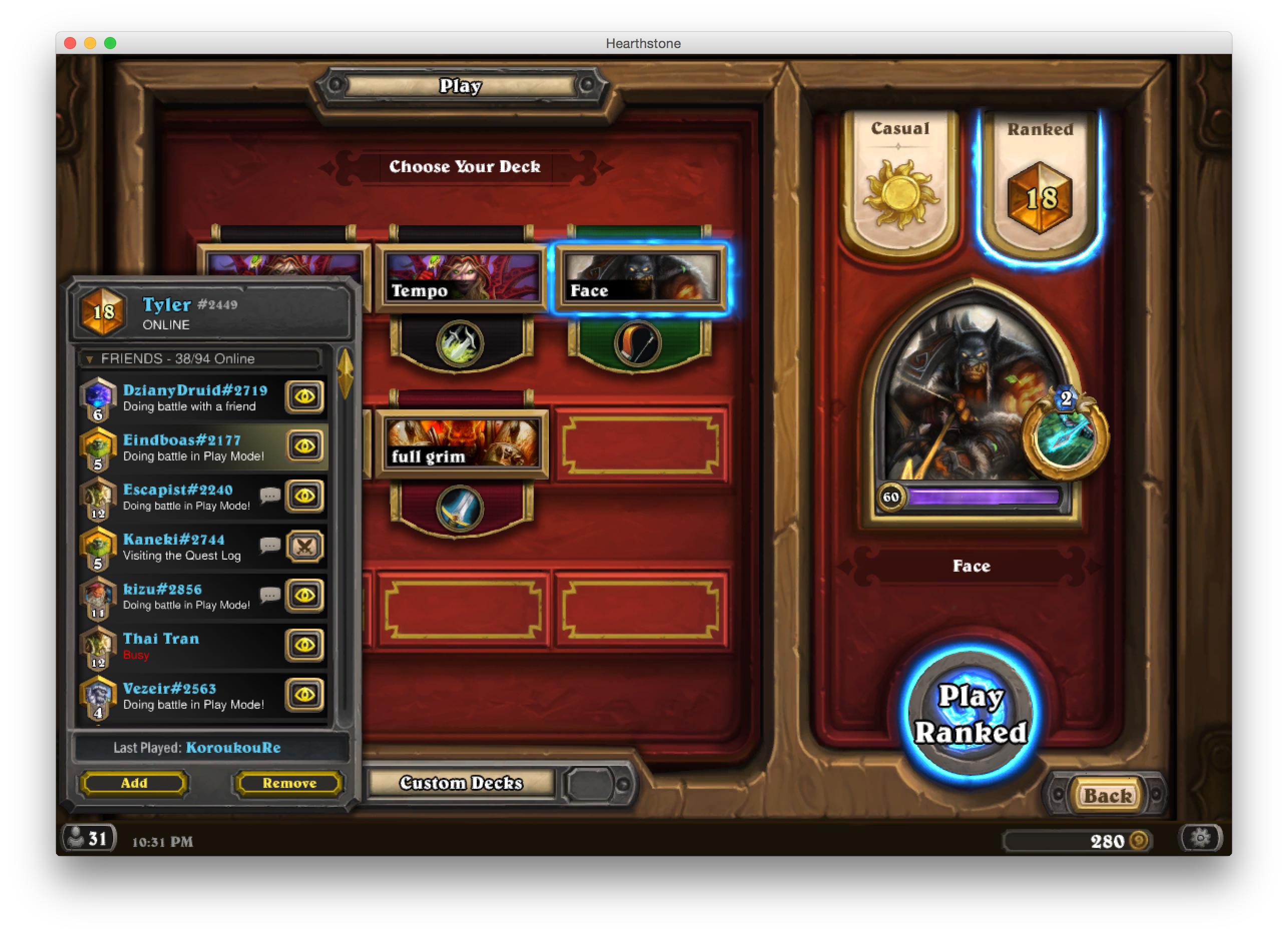 The moment I saw Quick Shot I knew it would become a great addition to the face hunter strategy. I replaced Haunted Creeper with Quick Shot, since it's much faster and isn't a dead draw when you actually need the damage. Other changes include adding a second Ironbeak Owl and a Snake Trap. I always felt like 1 Ironbeak Owl wasn't enough to get past Sludge Belcher and other taunts. The Snake Trap can catch your opponent off guard and get in a lot of damage. It also insures you getting value from the Mad Scientist.

Obviously go face as much as possible, but don't be a retard and go face when you have a really good trade. Remember to be mana efficient every turn, and if you can squeeze in your hero power without losing too much tempo, go for it. For example: It might be better to play Animal Companion + hero power on turn 6 instead of Animal Companion + Eaglehorn Bow. So you can follow up with Eaglehorn Bow + hero power + 2 drop on turn 7. Every damage counts and you will find yourself winning with exact lethal or being 1 damage off lethal most of the time.

Mulligan aggresively for a one drop, both Leper Gnome and Abusive Sergeant are always keeps. Other then those two cards, Mad Scientist is the best 2 drop to keep. Against warrior it is fine to keep Ironbeak Owl as well, so you can silence the early Armorsmith. If you have a one drop and an Animal Companion in your opening hand, it is fine to keep both. Since there's a big chance you will draw into a 2 drop. In the worst case you can play Leper Gnome turn 1, turn 2 hero power and turn 3 Animal Companion. You generally want to throw away all the damage spells such as SKill Command, Quick Shot and most obviously your secrets, since you want to get those from the Mad Scientist.

Still mulligan the same as with out the coin. Only major difference is that it's fine to keep a double 2 drop when you have the coin. For example Knife Juggler + Mad Scientist. Or Mad Scientist + Glaivezooka.

- Don't be greedy and do non value plays just so you can get a draw from the Quick Shot. It is perfectly fine to play it as a 3 face damage card.

- Always count up all the damage in your hand for about 3 turns ahead. This way you will know how much you can afford to trade, while aiming for lethal damage within the next few turns.

- Obviously only make the favorable trades, for example: Your Leper Gnome into his Knife Juggler. Or clearing a mech when you can expect Goblin Blastmage on turn 4. It's not always face guys ;).

This should give you a general idea of how to play with this deck. There is still a ton of stuff I haven't covered in this guide such as specific class matchups, but I might update that if this deck gets more views :).

Cheers, and have fun facetards!