Follow me on twitch to catch my streams! I'm a new streamer and just starting, support would be greatly appreciated!

Props to Genocide51 for the idea on this one. Basically the main combo in this deck is to stall the board long enough for you to draw into Emperor Thaurissan, Prophet Velen, 2 Mind Blasts, Velen's Chosen, and a Holy Smite in order to kill the opponent in one turn!

Although the main combo involves killing your opponent in one turn, there are other ways to win. The deck does not solely rely upon one combo to win the game. In fact, I've won most games by dealing about 15 damage to the opponent with the taunts and other minions throughout the game, and then I finish them with a few pieces of the combo.

The Combo: This deck has the ability to deal 30+ damage on turn 10 with the combination of playing Emperor Thaurissan on turn 9 (or whenever you get the combo cards in hand), reducing the cost of all of the cards in your hand by 1 at the end of your turn. Then, on the next turn, you will be able to play Prophet Velen with the buff from Velen's Chosen and burst your opponent to death using 2 Mind Blasts (dealing 12 damage each for 1 mana) and a Holy Smite to do the remaining 6 damage. Because of Emperor Thaurissan, Prophet Velen will be 6 mana, Velen's Chosen will be 2 mana, Holy Smite will be 0 mana, and together the Mind Blasts will cost 2 mana, making a total of 10 mana and 30 damage on turn 10 (assuming there is no other friendly minion on board who already has a Spell Damage +1). 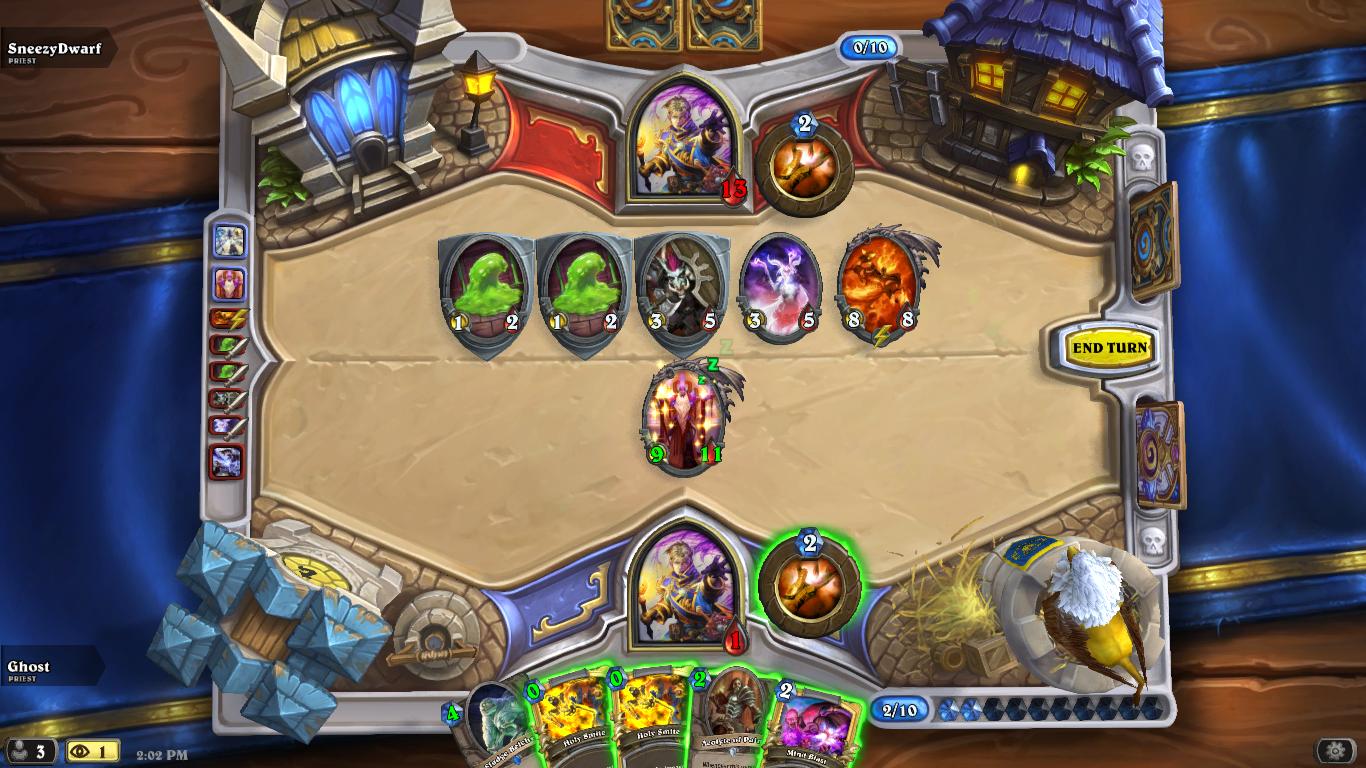 Who need's Ice Block? One health and I won.

This deck has plenty of stall mechanics and plenty of draw, so it is be feasible, just as Freeze Mage is feasible. Good luck against Warriors, but other than that, I see this working. Addressing the inclusion of Alexstrasza, I believe she fits in the deck because, if all else fails, you still have enough burst to kill the opponent with Alexstrasza, Bloodmage Thalnos, Holy Smite, and Mind Blasts. It could also make the Warrior match-up winnable because, unlike Freeze Mage, this Priest will be able to burst 30+ damage, which means a Warrior could have 30 health and 15 armor when you use Alexstrasza, putting the Warrior in killing range. The Freeze Mage doesn't have this much burst so the Warrior's armor ends up saving the Warrior in that match-up  and the Warrior wins with ease because the Mage runs out of burn. In the Hunter match-up, the heal from Alexstrasza is often game changing. If you don't have Alexstrasza, the best replacement is probably Ragnaros the Firelord.

Resurrect fits perfectly in this deck  because it acts almost as a Duplicate. The RNG can also be controlled so as to always bring back a minion with Taunt. For example, you could play a Deathlord as your first minion on turn 3 or 2 (if you have coin) and resurrect it immediately after it dies. Either way, Resurrect almost can't bring back a bad minion if played later on in the game; it will almost certainly either bring back a minion with Taunt, or a minion that will provide card draw.

Lightbomb is one of the most powerful clears in the game. It is very challenging to replace this card, but if you don't have Lightbombs, I would suggest replacing them with another copy of the Auchenai Soulpriest and Circle of Healing combo to clear the board.

Bloodmage Thalnos is great for the spell damage if you want more value from your Holy Nova, or other clears. It's also a decent minion to play on turn 2 to draw some cards. If you have Resurrect and another taunt in hand, I would hesitate to play Bloodmage Thalnos on turn 2 because you want to resurrect a taunt over a Bloodmage Thalnos. If you don't have it, replace it with a Loothoarder or a Kobold Geomancer, depending if you value the card draw or the spell damage more. I would suggest the Loothoarder, however.

Note: OTK means "one turn kill" for those who did not know.

UPDATE 1.1: This deck is viable. I've tested it and face hunter doesn't stand a chance. Here is the counter we've been searching for! Resurrect is strong if you use it correctly. 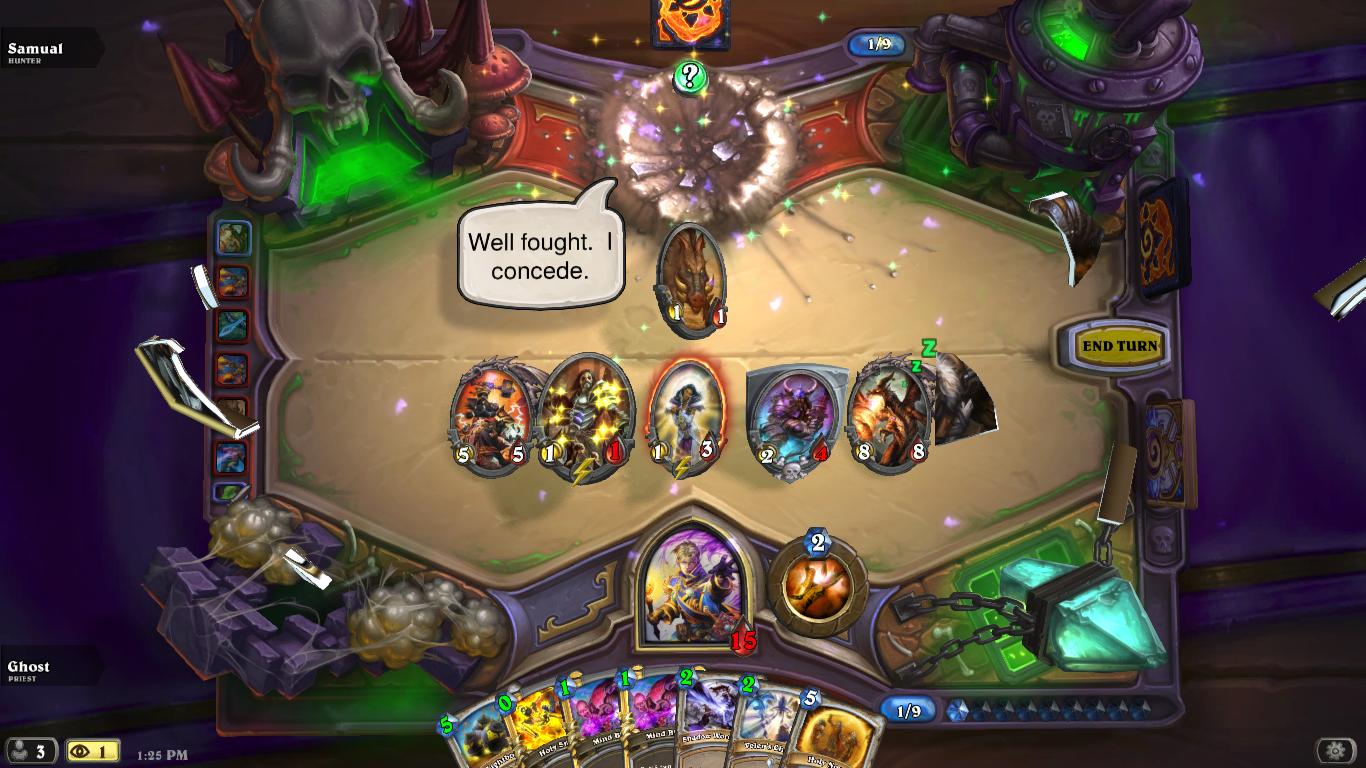 Update 1.2: I've added the Auchenai Soulpriest and Circle of Healing combination to help with match-ups against midrange decks. Auchenai Soulpriest is also a solid 4 drop (something the deck was originally lacking) which can help clear the board with the Priest hero power as well as with Circle of Healing. I'm also considering adding Holy Fires into the deck. If Freeze mage becomes very popular on ladder, Kezan Mystic might have a spot in this deck as well. Thank you for all of the constructive criticism!

Update 1.3: I've swapped out 1 Acolyte of Pain and 1 Holy Smite for 2 Annoy-o-Trons to have a stronger early game. The early taunt is important.