Reached Legend during Season 12 using this Deck and my Midrange Hunter !

Hello everyone ! I'm Spark, Legend player from France, and today we'll be taking a look at my Demonlock build.

As you may already have noticed with my recent Hunter Decks, Snake Bite and Deadly Tactics, respectively focused on Beasts and Deathrattles, I love highly synergistic Decks. After opening Mal'Ganis recently, I decided to take a look back at Demon synergies as I already toyed a bit with them in the past.

The Deck makes great use of all those awesome interactions and can fight a wide variety of Decks pretty efficiently with its solid Midrange playstyle. It's slightly on the Control side with some very cool and reliable combos in it, which will often reward you with some crazy wins.

I used the Deck with some awesome results from Rank 6 to Legend ! You can see my winrates at the end of the guide (updated weekly). 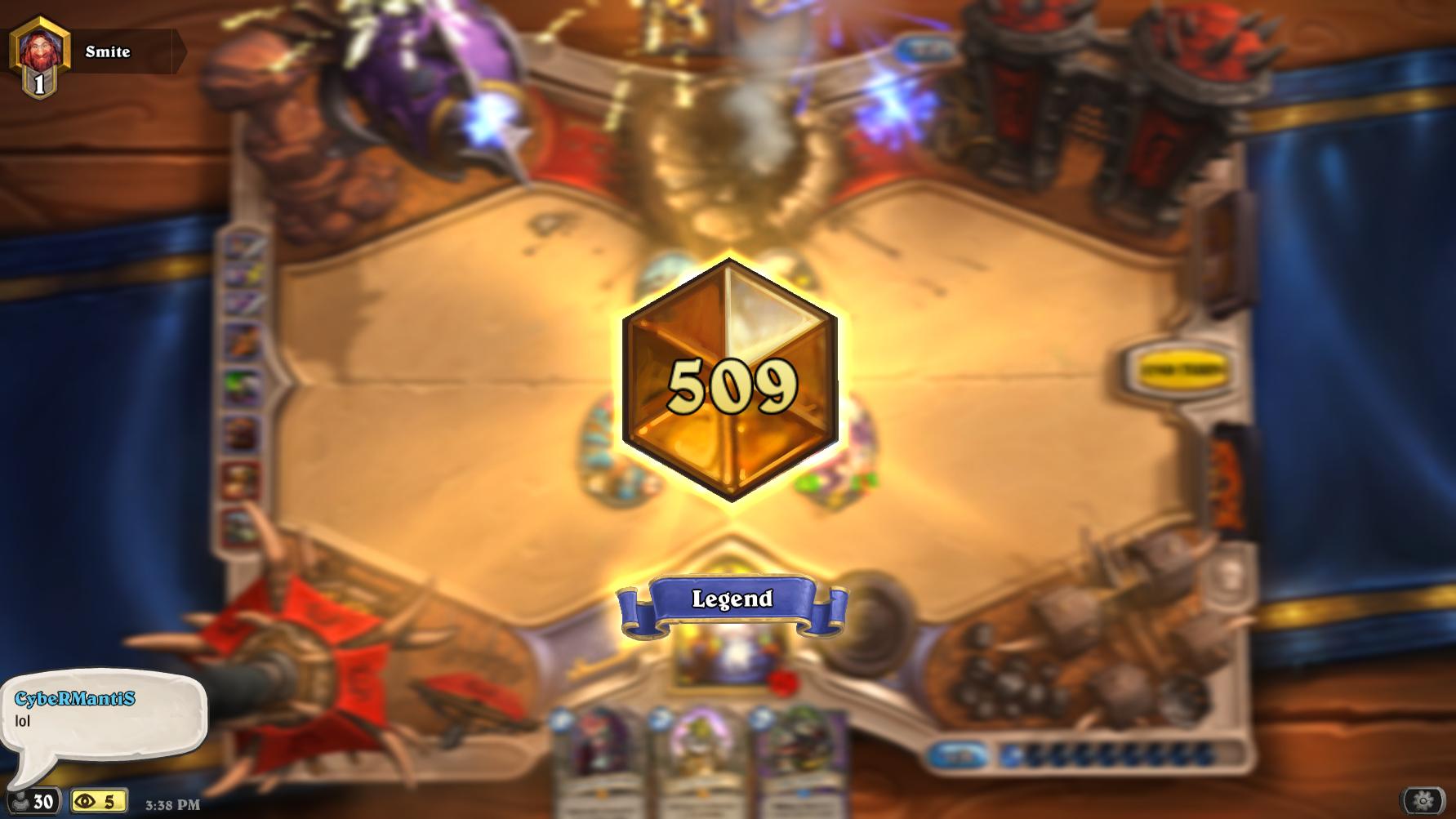 The Deck has access to many different combos using a target (a minion with a valuable deathrattle) and an amplifier (a way to activate the deathrattle while generating some form of value) from the following list :

Voidcaller is the central card of the Deck. This little guy will help you regain Tempo by throwing down some Demons for free while dying. Its body is good at trading during the midgame and its effect is just devastating, always try to make the best of use of it by playing weaker Demons to ensure he summons the bigger ones ;)

Void Terror is one of the most underrated card in the game. Of course, it may seem cheesy at first glance but when you use it in the right build it can do some amazing stuff !
Its primary use is to trigger Nerubian Egg or follow up a Power Overwhelming play to build a strong threat that your opponent will have to answer.
It can also help triggering Voidcaller to summon your beloved Doomguard, or Sylvanas Windrunner for a game-winning late game steal !

Shadowflame is already a great card but is even more valuable in this Deck. You'll look for similar combos with it, triggering a powerful Deathrattle while clearing the board. You can also power up a minion with Power Overwhelming or Abusive Sergeant if the opponent's board is too sticky ;)

Voidwalker and Mistress of Pain are really great at dealing with early aggression. Especially the second one since it can heal yourself for some damage in the process and you should really look to abuse this interaction with the available buffs in the Deck.

Doomguard is a superb card for the card has pulling it for free with Voidcaller is an insane tempo move ! If you can't pull this off, you'll be keeping the card in your hand to close the game later on. I personally never had to use it from my hand and found many lethal by keeping it ;)

Dread Infernal is another great target for Voidcaller because its 6/6 body is just the perfect mid-sized threat. Playing it with its Battlecry effect can also be very useful from time to time so don't underestimate that ;)

Mal'Ganis fits the Deck perfectly as you have a lot of Demons to power up and its effect can protect you from so much damage. Pulling it off with Voidcaller will force your opponent to answer it right away and that's fine if he does so. Using it from your hand in the late game can mean the win if you managed to make your opponent waste all his resources ;)

Lord Jaraxxus is just pure awesomeness. Its classic use will win some close game in the late game thanks to the heal, weapon and free 6/6 demons ;) Besides that, pulling him for free with Voidcaller is also a really nice move as a 3/15 body can do a lot of work during the mid game !

Darkbomb is just a good tool to have. It can deal with early aggresion, help killing stickier targets or simply reach lethal damage.

Hellfire comes along with Shadowflame as you can't be sure to have a minion for it on turn 4 against Aggro Decks. Remember that it can also trigger your Nerubian Egg while clearing the board ;) Besides that, its face damage can also be helpful when you're looking for lethal. I can't count how many games I won with Hellfire + Doomguard or some Power Overwhelming shenanigans.

Imp-losion is a really strong tempo tool but slightly too unreliable to justify playing 2 copies. You really want to use it when you're sure that its randomness won't mess up your play ;) After that, the 1/1 bodies can be used with Abusive Sergeant, Power Overwhelming, Defender of Argus or Mal'Ganis for more value.

Demonheart is really a better card than I expected. You'll often surprise your opponent with a powerful trade while keeping a potent threat on the board. The best target for it is definitely Mistress of Pain as you can heal for so much damage with it, allowing you to abuse Life Tap.

I already talked a bit about Abusive Sergeant. Its effect allow you to trigger Nerubian Egg while trading, heal yourself for more with Mistress of Pain while trading, power up Shadowflame, or create a target for Big Game Hunter.

Speaking of which, as you don't have true hard removal, Big Game Hunter is pretty important for the Deck because you're often going into the late game. The good thing is that you tend to draw a lot of card so you'll generally have it when needed ;)

You are also playing your own target for it in the name of Dr. Boom because the card is just too good and can bait Big Game Hunter to protect a future Mal'Ganis play. Besides that, Boom Bot are great target for your combo pieces ;)

Finally, Defender of Argus and Sludge Belcher complete the Deck with some defensive options as the metagame is pretty aggressive. Note that a taunted up Lord Jaraxxus can simply mean the win against Aggro Decks ;)

Situational keep : Void Terror if you have Nerubian Egg in hand

If you're missing some cards or simply looking to adjust the Deck to your personal preferences, here are some cards you should consider : Demonfire, Loatheb, Antique Healbot, Siphon Soul, Illidan Stormrage, Kel'Thuzad, Ragnaros the Firelord and Alexstrasza

If you're looking to try out some other tech cards, here are the cards that I find the most expandable from my experience : 1 Void Terror (having at least one is too much of a good tech honestly), Defender of Argus, Imp-losion, Demonheart (although I really like this tech and find it very efficient) and Dread Infernal

I'll obviously work on including Imp Gang Boss when Blackrock Mountain will be released, so look for some updates at this time ;)

As stated above, Imp Gang Boss just fits the Deck perfectly ! It was pretty much the 3-drop we lacked for the Deck and it's doing amazingly well at trading against aggressive Decks.

The addition of more early game Demons lead me to test Demonfire again, 2 copies felt a bit too much as I sometimes needed the standard 3 damage spell to kill an early threat so I decided to run the mix of 1 Demonfire and 1 Darkbomb.

Then I decided to tech in the new Demonwrath and god it's doing amazing ! That's a very appropriate early game tool to control aggressive decks and complements perfectly our set of board clears with various amount of damage. Not to mention that it obviously synergizes well with the build ;)

Finally, Emperor Thaurissan fits the Deck very nicely as you often draw many cards throughout the game thanks to your hero power, so it always produce great value. This card by itself allow some crazy combos that couldn't be possible otherwise or simply make your standard combos cheaper, which is a huge a gain in tempo !

Here is a laddering session with the updated Deck :

I also took this opportunity to update my Zoolock : Demonic Zoo !

This is pretty much the aggressive variant of this Deck and also uses a lot of Demon synergies to achieve victory, so don't hesitate to check it out if want to have some fun with another playstyle ;)

The Deck has also run through some minor changes to adapt to the meta after the release of League of Explorers ! Nothing to crazy about that, but had to take a look back at the Deck since I didn't changed it for a long time.
I had to adapt to a faster meta and put back 2 Defender of Argus for their great synergy with our early minions and Lord of Jarraxus when summoned by Voidcaller.
Demonfire comes back in the Deck as it kills Knife Juggler very nicely and can empower your demon, which is especially helpful with Mistress of Pain to make it stickier and regain a good amount of life.

I've uploaded a Deck Gameplay Series spotlighting the Deck in action.
I definitely recommend checking out the entire playlist to see how to play the Deck and how awesome those Demon synergies can be !

The Deck is a lot of fun thanks to all those synergies, it can shine at each stage of the game and has some really unsuspected burst potential.
It is particularly strong against slower Decks due to Life Tap and its solid late game value but can also fight aggressive Decks pretty well due to its efficient early tools and mid-game presence.

Here are my winrates with the Deck on the ladder (Legend S12) :