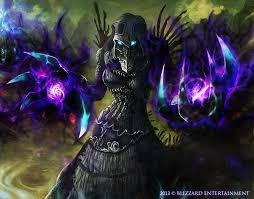 Updated 3/21 (-1x Sludge Belcher -1x Shadow Madness / +1x Vol'jin +1x Mind Control --- I feel these changes will give you more options for late game, and have giving the deck more flexibility and to deal with troublesome decks slightly better.

Due to the hard time Priest is having on the ladder at the moment, it's time to throw the generic control decks out. The meta Priest is facing is generally too aggressive and minion heavy to combat with normal control spells. It's time to adapt and play a deck that is equally aggressive.

Shattered Shadows is everything you expect from an early game Control Priest, with the ability to reach lethal from much further than any opponent will expect. Normally Priest has to slowly wear their opponent down, being careful to apply just enough pressure to keep the board in check.

Not this deck. Using Malygos and/or Prophet Velen with Mind Blast is just like a Druids Force of Nature + Savage Roar or a Mages Pyroblast. One Mindblast can do 10 damage with the added bonus of still having a couple large bodies on the board in addition to also working with Holy Smite, Holy Fire, Holy Nova, and your hero power. So not only is it a huge hit to the health, but also provides another threat by leaving behind some big and hard to deal with bodies.

How to play the deck: With one forewarning... It is not an easy deck to play, but done right... the match ends very quickly. Do not hold onto your finishing spells like Smite/Holy Fire if you need them to take care of a troublesome minion.

During the early game, the deck plays exactly like most Control Priest decks would. Protect your Clerics and get as many draws as possible, Between your 4 class AoE's and Wild Pyromancers the early game aggression by your opponent isn't too hard to handle.

By mid game, you have to start playing a little more aggressively. Majority of the time Control Priest would rather play it safe and trade than going face and letting them decide how to trade, this is where the deck gets tricky. You have to take opportunities to go face, while playing the right minions where they can initiate trades, but it doesn't end disastrously for you. Be aggressive enough to bring them down to around 20 health, but not so aggressive they feel threatened and heal/taunt up.

Late game is where things differ from standard Control. In this deck you have 24 points of unbuffed spell damage (or well over 35 buffed). This allows you to use some of the Holy Smites / Holy Fire to deal with minions if you have the need, while  also giving you the ability to reach lethal from very far away. This means that in order to fit in these lethal reach cards, some late game has been sacrificed. The bonus is that not only can you end the tediously long control vs control matches quickly, you still have several strong late game minions that can be used. You still have 2xShadow Word: Deaths, Malygos is still a 4/12, and Prophet Velen a 7/7. So even if you do not draw into your finishers, you still have options.

Versus any setup you're looking for any of your early game cards / combos like:

Northshire Cleric + Power Word: Shield, if you doubt they have a removal.

Substitutions - Be sure to check this if you are missing any key cards.

I am sure most people might not have Prophet Velen, sadly there isn't a replacement for him, closest thing I could suggest might be a Faceless Manipulator. Ysera is much slower, but can supply some burst + late game functionality.

Malygos is also something that isn't replaceable, but the same thing goes for what I said about Prophet Velen above. A second Holy Fire, a Mind Control, and Alexstrasza can be tried instead of Malygos, though not recommended.

Mass Dispel is something that fits into this deck perfectly, when it gets to late game and you're off lethal by just a few points... it's a nice way to get through their taunts and bring the game to a swift halt.

Vol'jin can also be subbed in if you feel the need, he works well with the smites, you can sub him in for a Shadow Madness or a Sludge Belcher. I chose to leave him out in favor of a stronger more defensive early/mid game, feel free to use him if you wish.

Kezan Mystic is also a great fit if you're seeing a large number of secret decks, sub for Shadow Madness

I generally prefer Holy Nova over Lightbomb, due to Velen and Malygos (4/7 damage/heal is amazing), but you are never sure if its going to stick around next turn. If you find that Holy Nova isn't doing enough for you Lighbomb is a good sub for one of your Novas.

This deck is built to be aggressive, and I have had an absolute blast playing it this season. It fits into the meta so well, it's built like a Shadow Priest, yet without the huge downside of being too slow, you still have burst and are able to heal your minions for extra value. The goal was to keep it fast, not rely on too many combos that ultimately you're holding onto dead cards that aren't playable, or might get better value later. Important Note: The idea of how this deck works in an ideal situation is just amazing. But under no circumstances should all your Holy Smites, Mind Blasts, Holy Fire,Prophet Velen, or Malygos be held back if you need to use them keep the board balanced.