The Deck is insanely fun to play and I'm very satisfied with the climbing potential of the Deck for the moment.

For laddering, I wouldn't necessarly recommend it over my Snake Bite (Full Beast Hunter Deck), which carried me to Legend last season, or my Death Trap (Midrange Hunter), which is pretty standard nowadays.
Specifically if you face too many Aggro Decks because it's unfavored against them. However, it is pretty much crushing everything else so it seems really fair to me !

Hello everyone ! I'm Spark, Legend player from France, and today I'm back with ... another Hunter Deck !

I already toyed a bit with heavy Deathrattle focused builds for Hunter back when GvG came out and I was kinda of nostalgic about it so I decided to dive into it once again.
I initially tought about going for some fun games with it but it happened to be way more efficient than I expected so I decided to share a little guide with you guys ;

You probably already know that I'm a big fan of Feign Death, as I already used it as a Tech card in my older Beasty Zoo Midrange Hunter or in my up-to-date Explosive Snipe Control Hunter. So I pretty much decided to commit fully on this card and below you can see the kind of plays you'll be able to pull off with it in this Deck : 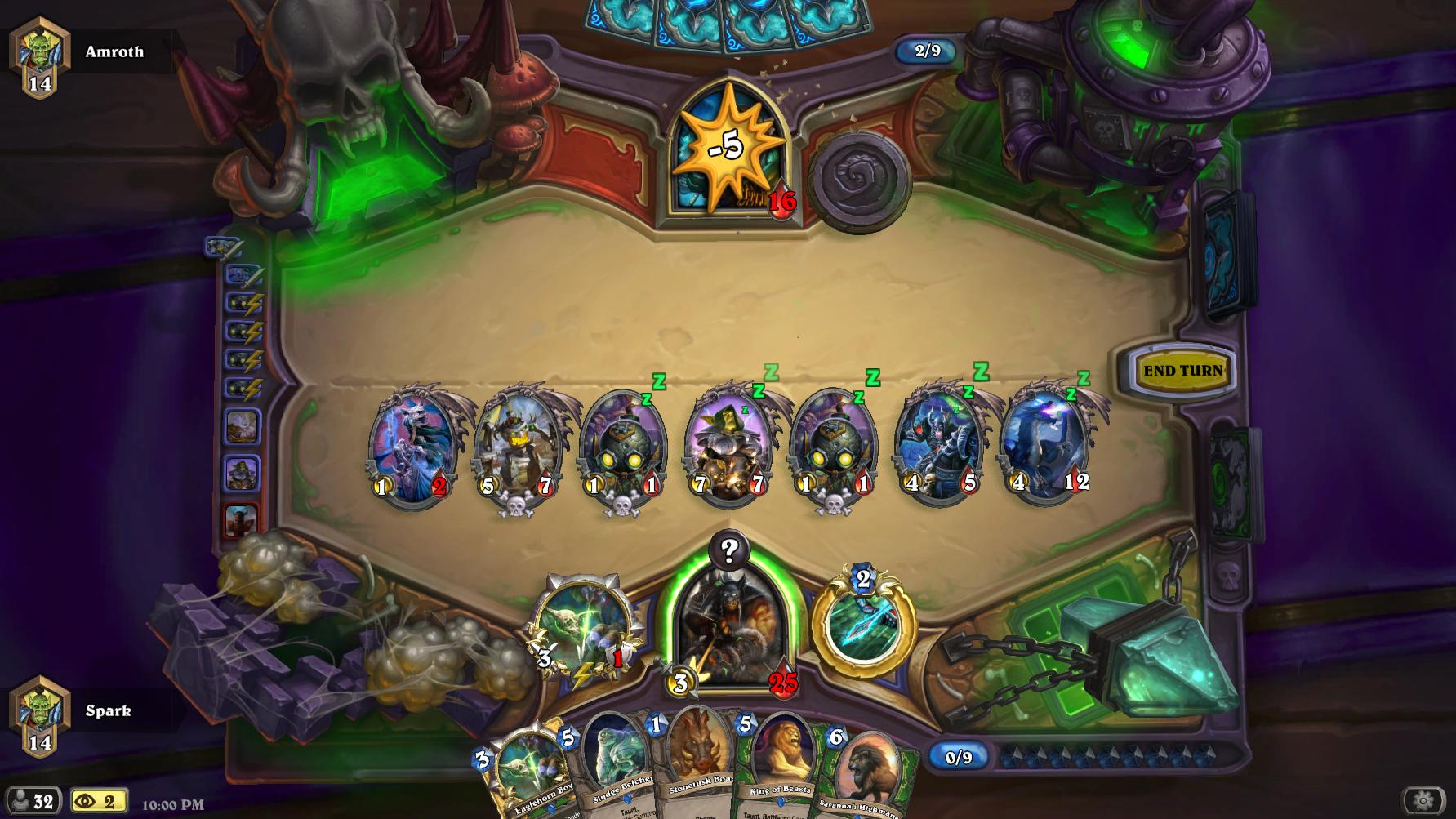 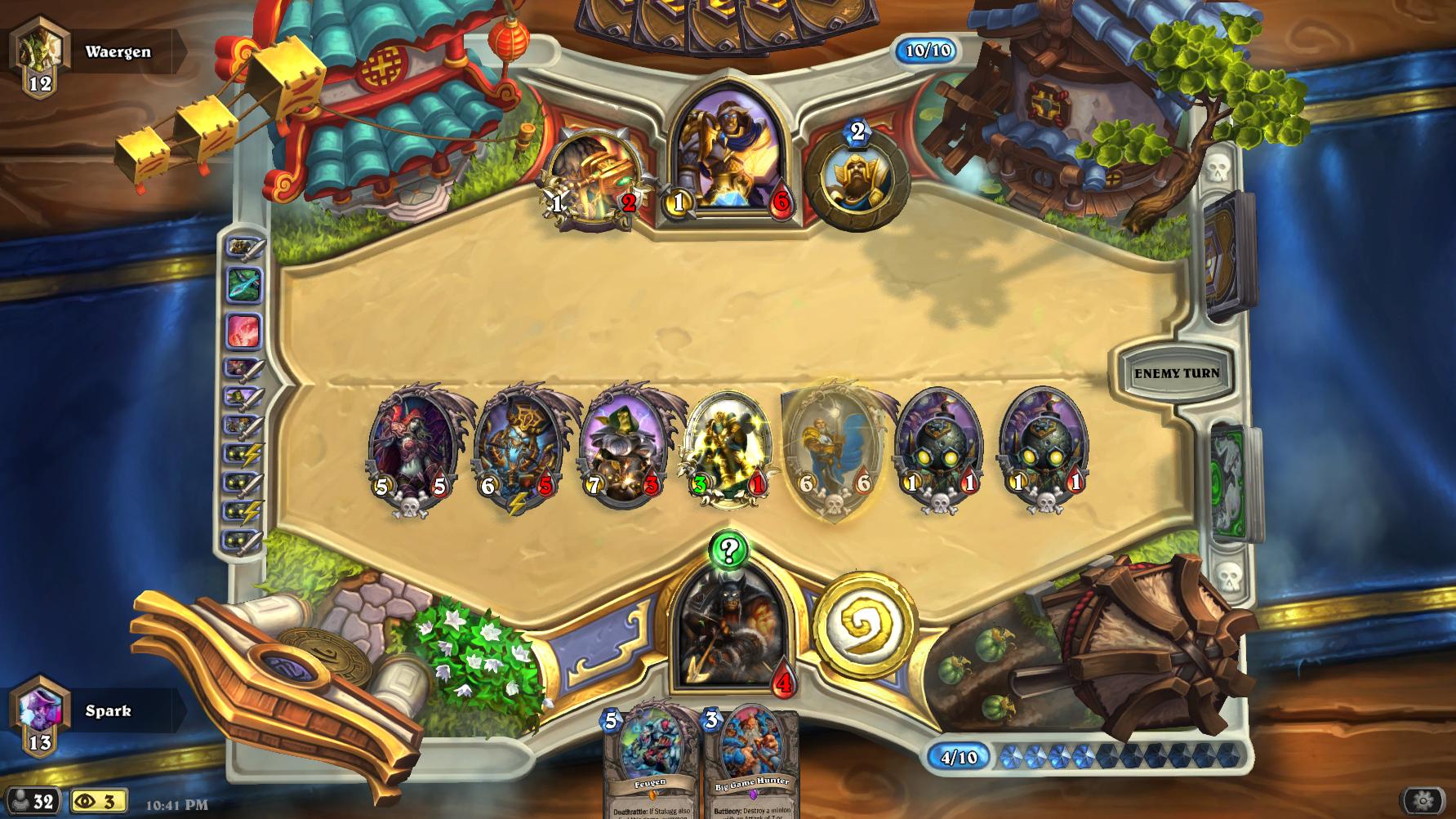 First of all, before you ask about any interaction, always remember that Deathrattles trigger in the order they were played ! Understanding that is pretty simple but very important to pilot the Deck properly ;)

The initial idea was to commit fully on Deathrattle minions in order to justify playing 2 Feign Death. The card is simply amazing in this Deck and you should generally hold it for a big late game play that will just make your opponent concede like the one above !

Baron Rivendare is an awesome amplifier for your combos but you shouldn't necessarly look to pull off the most amazing play of all time with it. I generally use it in the midgame to make use of my small minions like Webspinner and Loot Hoarder as it will generates a lot of value and your opponent will still have to deal with the card if he doesn't want to face outrageous board states ;)

Kel'Thuzad is added to the mix because of its amazing potential with the rest of the Deck. Indeed, as your minions tend to be extremely sticky, your board will very rarely be empty at this stage of the game. Finding a good play with this card will generally seal the game as it can lead to infamous board states !

Your late game threats are the most important targets you should look for to pull off amazing combos that will turn the game around and make your opponent concede right away ;)

Sneed's Old Shredder fits the Deck perfectly as it gives a badass late game threats that can generate an insane amount of value with your other combo pieces.

Dr. Boom is already overpowered on its own but the Deathrattle effect of Boom Bot is obviously the icing on the cake for this Deck.

Sylvanas Windrunner is probably the MVP when speaking of combos because you can abuse its Deathrattle effect to both control your opponent's threats and establish your own board presence.

Savannah Highmane simply brings Legendary value but you can play 2 copies ... Pulling of some combos with its Deathrattle effect won't always be particularly relevant because of AoE spells but it's always a nice addition and the card is just too good to be overlooked ;)

Feugen and Stalagg are finally finding a Deck fitting them. I was kinda skeptical at first glance but they are honestly doing a really good job and I was amazed by the number of Thaddius I actually spawned ! The best case scenario is getting Feugen first because the card offers a pretty good body for the mid game and then Stalagg comes with its heavy pressure to give headache to your opponent.

Explosive Sheep combos really well with Feign Death to regain board control. This move is extremely efficient against aggressive Decks like Mech Mage because they tend to commit fully on developping their board and it can allow you to reach the mid to late game. The card tends to stick a little bit in my hand from time to time but it saved many games against Aggro Decks and it's always a nice safety to have. You'll generally have something else to play anyway if it's not the time for it !

The rest of the Deck is mostly constituted of the most valuable Deathrattle minions I could find to adjust the curve smoothly.

Webspinner and Loot Hoarder will help you getting early presence while not running out of steams, especially if you can include them in a combo to generate some more value out of their Deathrattle effect.

Harvest Golem and Piloted Shredder will be very useful to get into the mid game because they are pretty sticky and trade very well with various threats.

Sludge Belcher is obviously in the Deck to help you reaching the late game. This sticky taunt can often offers enough tempo to pull of your amazing late game plays ;)

Big Game Hunter comes in the Deck to deal with some late game threats as Dr. Boom is still dominant and you'll generally look to reach those later stages of the game.

Finally, Mad Scientist and Eaglehorn Bow comes to complete the set as they are just awesome tempo tools early in the game and can generate a lot of value in the long run !

Freezing Trap is very useful to get the tempo edge, especially against Midrangy Decks.
Explosive Trap is an awesome tool against Aggro Decks and will generally help you weakening the opponent's board to trade with your small threats.
Snipe is doing a really good job here as this trap is always unexpected and generally finds good value by killing mid-sized threats like Spider Tank or weakening sticky targets like Sludge Belcher to finish it off with smaller minions or Eaglehorn Bow.

I've uploaded a Deck Gameplay Series spotlighting the Deck in action.
I definitely recommend checking out the entire playlist to see how to play the Deck and how awesome those Deathrattle synergies can be !

This is honestly one of the funniest Deck I've ever played with and it is actually pretty efficient ! I'm not saying that he will carry you to Legend, although almost any Deck could do it if piloted properly, but it's doing fairly well with its strengths and weaknesses ;)

Here are my winrates with the Deck on the ladder (currently Rank 2) :

Remember that the Deck is vulnerable to aggressive Decks like Mech Mage and Face Hunter so I wouldn't necessarly suggest it if you face too many of them. Those match ups are not unwinnable but definitely require you to get the right hand.

On the other hand, it is exceptionally strong against slower Decks due to some really high late game value. If your environnant meta allows it, I definitely recommend you to give it a try ;)
Most importantly, I have an insane amount of fun playing it ! Just check out the videos if you don't know what I mean ;)