This is the deck I used to get to Legend for the first time!

I recorded the last game where I got to legend for those who are interested (and those who want proof of legend!):

I also made a video deck tech for those who would rather listen than read :)

Clockwork Gnome serves as an acceptable one-drop against all classes that can't kill it for free with their hero power (that is every class except Druid, Mage and Rogue). It's also the cheapest mech in the game, making it easy to have a mech for Cogmaster, Tinkertown Technician and Goblin Blastmage.

Lastly, it provides you with a spare part when it dies, which can be used to make an efficient trade or in conjunction with Archmage Antonidas.

Now that Undertaker has been nerfed, Cogmaster is one of the best one-drop minions in the game (second only to Flame Imp in my opinion). Cogmaster is responsible for the deck's most broken starts, and coining out two of them on turn 1 is basically game over.

Frostbolt is an essential card in the meta right now, helping you to keep the board under control in the early game, and providing essential reach late game.

It's important to remember that freezing a minion or the enemy hero can be very beneficial (particularly against weapon classes!).

In the 44 games I played with this deck on the way to legend, I played Unstable Portal 20 times.

This is what I got:

Overall, the card was very very solid, giving me utter crap only once, while winning me the game multiple times. Don't keep it in your opening hand though, you'd rather mulligan for cards that are guaranteed to affect the board early on.

Judge this card for yourself, but I loved it (the random element also made the grind more fun!).

This guy consistently over-performed for me. He protects your smaller minions such as Mechwarper, Clockwork Gnome and Cogmaster, makes it difficult for your opponent to made efficient trades, is a sticky mech for Cogmaster, Tinkertown Technician and Goblin Blastmage, and protects your face from evil Hunters and Druid Combos.

This guy is BROKEN. In the final game with this deck I had like five minions out by the end of turn four thanks to this card. If it gets nerfed somehow I wouldn't be surprised.

Doesn't look like much, and often he's just a 2/3 for 2, but sometimes he is so much more, freezing a giant minion for a turn, or stopping a weapon class from ever getting an attack in. If he wasn't a mech he wouldn't be good enough for the deck, but he is so deal with it :P

You can either play Spider Tank or Harvest Golem. I prefer Spider Tank because you get most of the stats (3/4 compared to 4/4 total) straight up, which matters in a number of cases, such as needing to kill a Mechwarper or other 3-health minion, and hits for more damage each attack. I found the Damaged Golem to be too fragile to be of much worth.

I only played one Tinkertown Technician because he is somewhat situational, but having one was great. a 4/4 for 3 with a spare part is a great deal.

Sludge Belcher.
Druid of the Claw.
Other big minions.
Opponents.

Make sure you know how many Fireballs you've got left in your deck, and try not to waste them if you don't have to. Plan out your turns and try to save this to go face - it's how I won most of my games.

This card is disgusting. Normally the first few turns are spent jockeying for board position, and then this guy comes down and suddenly one side of the board is completely clear. Guess which side?

It's also a key card in the Paladin matchup, as the main way they beat you is with an early Muster for Battle, which this card counters quite nicely.

I generally preferred Mechanical Yeti to Piloted Shredder because it has 5 health, allowing it to survive against cards like Truesilver Champion, Swipe, Circle of Healing + Auchenai Soulpriest and Piloted Shredder (who is everywhere right now!).

The spare part is really nice, too.

One advantage that Piloted Shredder has over Mechanical Yeti is it's stickiness. This allows you to overextend a bit more than usual as you'll be able to recover from an AoE faster, and hit just as hard if they don't have it.

Worth every single piece of dust you'll spend crafting him. So many times I was wishing for a Fireball off the top to win the game, that I decided to add in Leeroy to serve as an additional Fireball at the beginning of rank 2. Did I mention that I went 11-0 from rank 2 to legend?

Leeroy Jenkins won like 4 of those games at least. Craft him now, no exceptions.

a 5/5 for 5 is super solid, and you'll play him on turn 5 happily just for the body. Then there are the games where his ability locks out a Hunter from being able to Kill Command + Hero Power to kill you, and you'll feel like a god.

He's also great in the later stages of the game against control decks and Druid Combo, but don't save him if you have no other play.

Hits harder than Cairne Bloodhoof ever will, and can trade with a [card[Druid of the Claw[/card] or eat a Sludge Belcher. He's even sticky!

Your ace in the hole against the more controlling decks such as Paladin, Warrior and Priest. If you have him in hand, try and save your spare parts to use with him, but if you don't, feel free to use spare parts if a profitable situation arises.

Originally I was skeptical about having Dr. Boom in the deck, but he won enough games to earn his keep, and was never a dead card.

He forces them to have the Big Game Hunter. If they have it, the game continues. If not, they lose. You can see why people want him nerfed.

You want to mulligan for early game minions such as:

Clockwork Gnome (against classes that aren't Druid, Mage or Rogue)
Cogmaster
Mechwarper
Annoy-o-Tron
Snowchugger
Frostbolt (against aggressive decks)
Spider Tank (if you already have a 2 drop)
Goblin Blastmage (against Paladin)

sudajalem having fun with Unstable Portal: 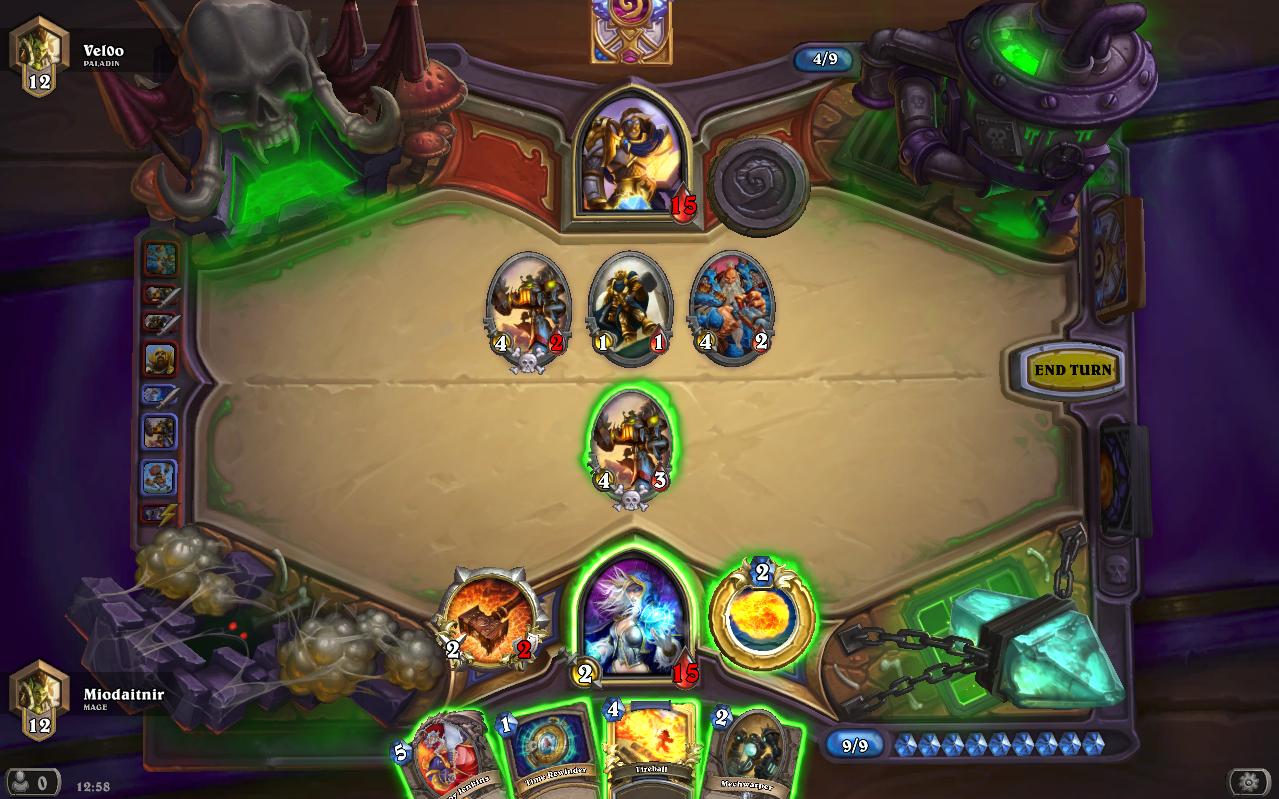 What Deck am I currently playing?:

I'm currently playing a Paladin brew! It's a control deck that incorporates Molten Giants, you can check it out here:

If you like the deck please take a second to give it a vote, it took me a while to write this so I'd really appreciate it!

I'm also going to be creating a bunch more YouTube content, including at least 1 new Hearthstone-related video every day for the month of February! You can check out my channel at:

Thanks guys, enjoy the deck!