I finally made it to legend with this deck. Below is a list of my estimated win percentages against each specific class I encountered. I actually didn't play against any Shaman deck. 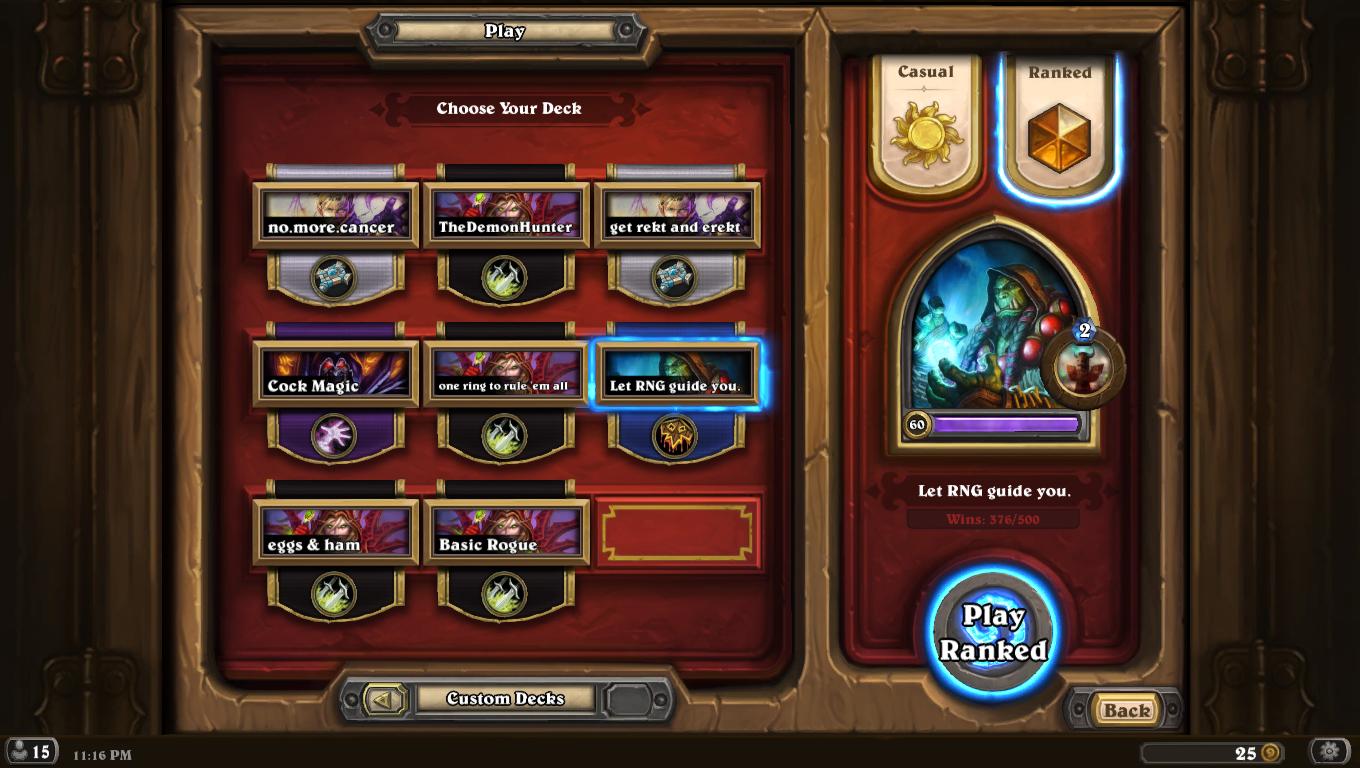 I'm currently at rank 3 using this deck starting from rank 5 with an above 80% winrate. The deck is fairly standard and pretty consistent which is nice for ladder play.

General information:
- Always keep in mind the overload cost that some cards have when planing your next turn. Especially turn 2 coin into Feral Spirit is not an optimal play.
- The main goal of this deck is to maintain board control. If you can use Al'Akir the Windlord and maybe Rockbiter Weapon to do favorable trades go for it.
- Don't overextend into commonly used board clears.
- Always use totemic call first before using a damage spell if you have the leftover mana.

*Those matchups are not unwinnable, but you need a good start. Feral Spirit and Lightning Storm are your best friends.

2x Crackle & 1x Lava Burst
I replaced both Lightning Bolts with these, because I think their a lot more viable. Surely it's random, but with all the spell damage you got you can clear much bigger threats. For example with just a single spell damage source you have a 75% chance of destroying any 5 health minions. Even without the still damage you're still looking at a solid 50% chance. I run a single Lava Burst for additional burst damage to close up games if needed. Also it's great to 1:1 minions like Shieldmaiden or Sludge Belcher and even Druid of the Claw with a spell damage source.

1x Antique Healbot
Hunter is the only reason why I play this card. It's also semi-decent against freeze mage, but that's an nearly unwinnable matchup in my opinion. Other than that it has solid value against Druid to get you out of combo range if necessary.

1x Al'Akir the Windlord & 1x Neptulon
I run both class legendaries in this deck. Al'Akir the Windlord has been mvp everytime I played it. You can either clear the board very efficiently and in some rare cases you can use him to burst the opponent down if you have some Rockbiter Weapons to go with it. Neptulon is just a one card value king. Even though you're 'only' getting some murlocs, your opponent still has to deal with them. Given the amount of possible outcomes it makes it very hard for your opponent to prepare for what might be coming with chargers like Bluegill Warrior or Old Murk Eye being available.

No Dr. Boom?
Even though that makes Neptulon my only Big Game Hunter target, I decided not to run him. Since there are a lot of overload cards in this deck, it might not be possible to play him on curve which I don't like. I'm not saying that the card is bad, but I'm just not playing it in this specific build. If you want you can probably take out Al'Akir the Windlord for it.

No Loatheb?
I would love to include this card in the deck. I will probably try taking out either an Azure Drake or Sludge Belcher for it, but I'm not sure yet.

*Nerubian Egg can be used in combination with Flametongue Totem and especially Rockbiter Weapon since you will have less efficient targets without Al'Akir the Windlord. It is also decent against board clears.

If you guys want a mulligan guide for this deck I can probably provide one, but I think there are quite a lot Shaman mulligan guides available in the interwebs. Also if you liked this hit +1!