I never seriously played Wild and never even reached Bronze 5 there. But this season, having already reached Legend in Standard and having to play more Ranked because of the faction war event I decided to try something interesting in Wild. I tried a similar deck from HSReplay and liked the idea a lot. So, I started the climb and it took me 4 days to reach Legend 1278 from Bronze 10 (x4 star bonus) with this deck (though, of course, I've been changing things slightly along the way). The final record is 99-28 which is about 78%. Winrate in Diamond is 68% as it is, obviously, much harder there. But I'd say it is still very respectable especially since about a third of these 28 losses are due to my own dumb mistakes.

So, those of you who are interested in trying some APM combo deck, please continue reading. The stats are below. 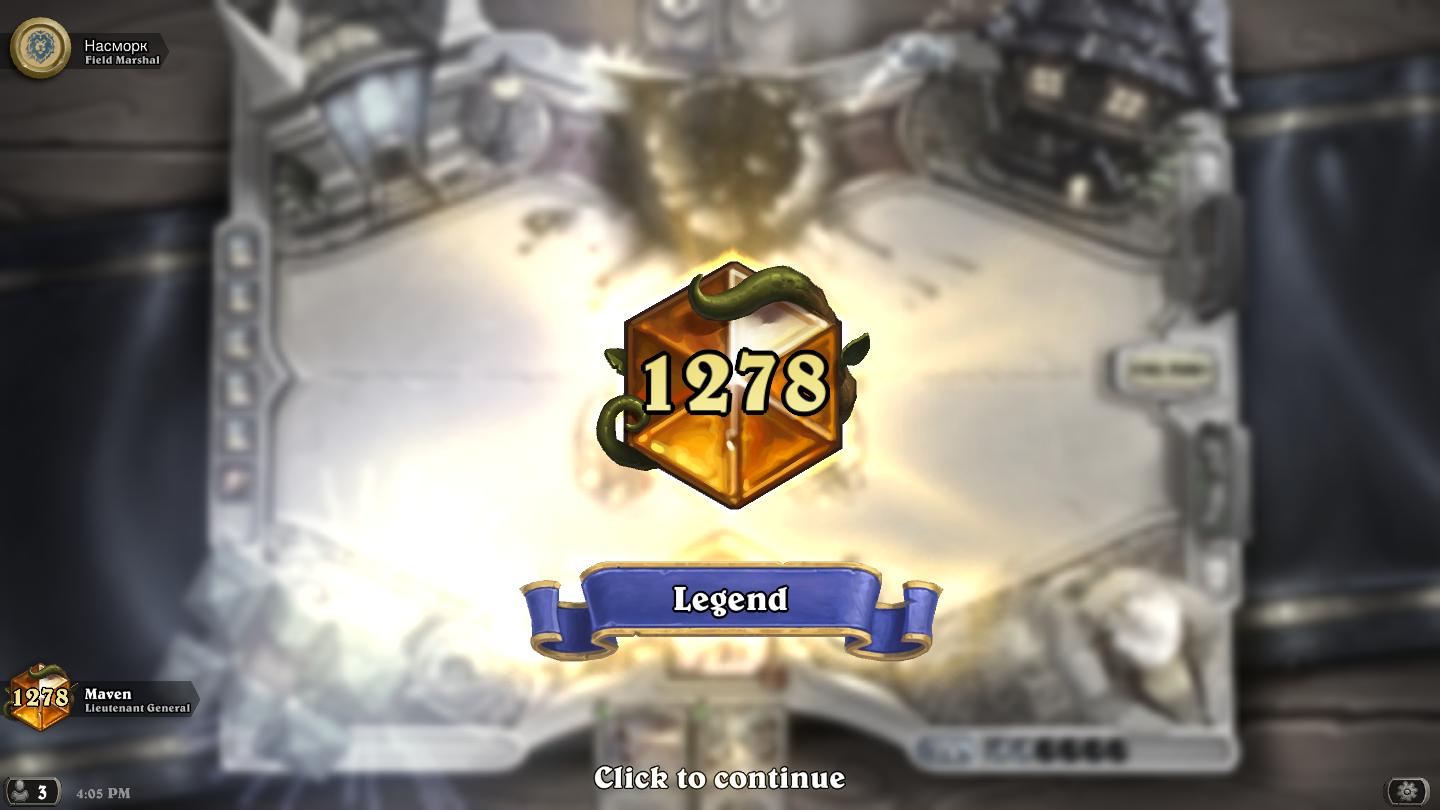 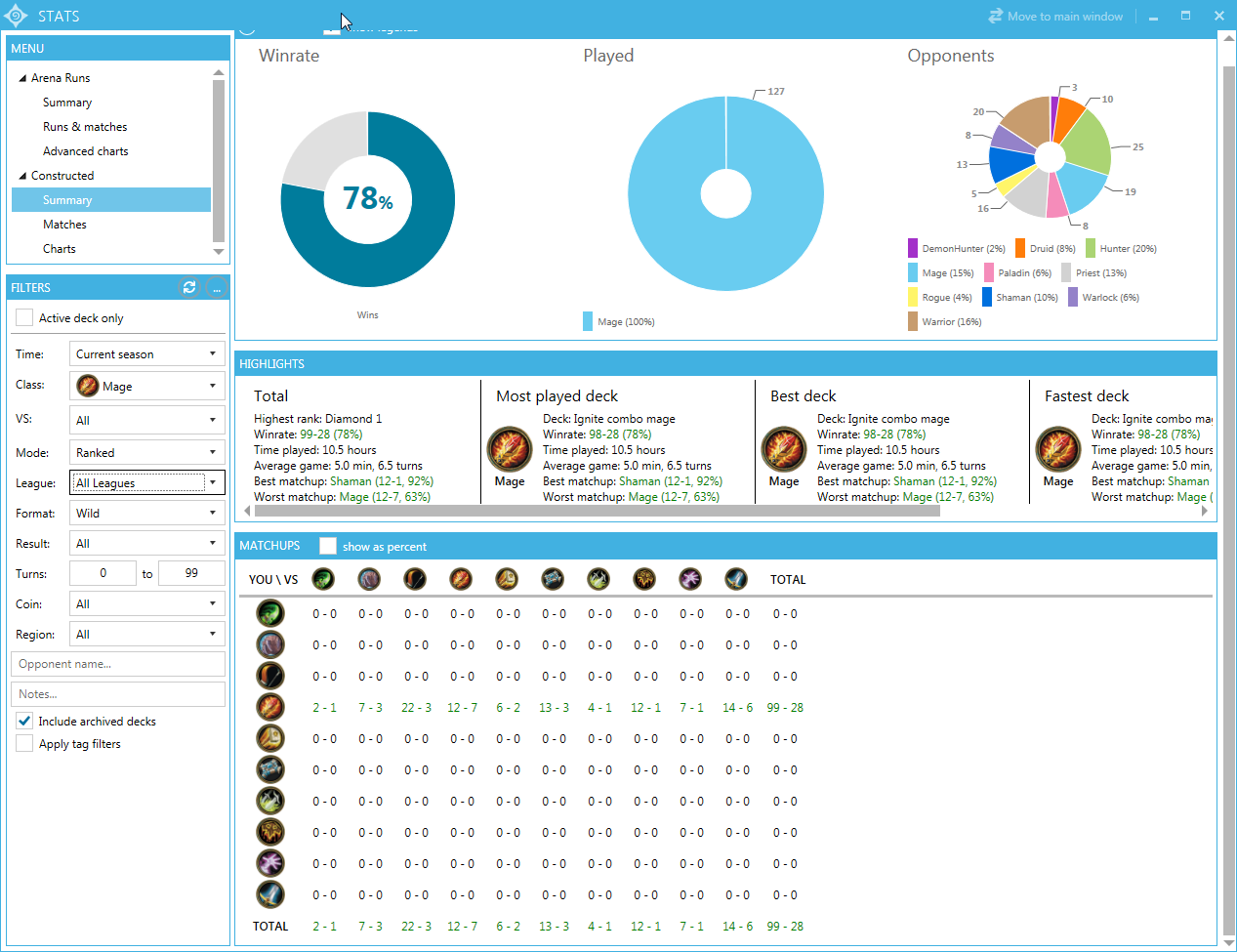 This is a combo OTK deck which requires you to plan ahead for several turns and then execute things in the very quick succession, killing your opponent in one turn. Normally, you're able to kill your opponent on turn 6, but it can happen earlier with a coin and some lucky draws (I managed to do it as early as turn 3 once but that was incredibly lucky) or later with unlucky ones. Very rarely a game will continue past turn 8-9 - one of you should be dead by that moment.

The idea of the combo is to play Sorcerer's Apprentice and Sanctum Chandler followed by Hot Streak and Molten Reflection to copy your apprentice. You will cycle your cheap fire spells with the Chandler until no spell is left in the deck. This will allow you to endlessly Ignite opponent's face for 0 mana.

The full combo cost is 8 mana and it's very late. To cheat 2 mana we use Mana Biscuit or Elemental Evocation. This allows you to do the combo on turn 6 (or 5 with the coin).

So, to start your combo on turn 6 you absolutely require the following:

After that you need a way to cycle through spells and draw Hot Streak and Molten Reflection to copy the apprentice. First Flame is the best way to cycle as it allows you to do it twice for 0 mana, but two other cheap fire spells can be used too.

Now, let's talk about each card in particular and its place and purpose in this deck

Sphere of Sapience - The best turn 1 play. It allows you to find combo pieces faster and more efficiently

First Flame - Spell cycle and removal against aggressive decks. However, as it is your best cycle card, always make sure that you have enough spells to cycle if you use it as removal

Conjure Mana Biscuit - An alternate way to cheat mana and activate your combo. One of the two non-fire spells in the deck

Sorcerer's Apprentice - Combo piece. If you have two copies in hand, you may use one earlier but beware of effects that pull minions out of your hand

Starscryer - Spell draw and an early minion. It is an important part because it is cheap and can be played on turn 2

Ice Block - A "one more turn, please" against aggressive decks that are aiming to finish you before your combo is ready

Inconspicuous Rider - A way to pull out your Ice Block and thin your deck. I was playing a second copy of Witchwood Piper before but I think this is better.

Molten Reflection - Combo piece. A second Sorcerer's Apprentice can be played from hand instead of it but it costs 1 more mana

Sandbinder - A way to draw your Sanctum Chandler

Sanctum Chandler - Combo piece. If you have two copies in hand, you may use one for spell cycling, but beware of effects that pull minions from your hand

All other cards are tradeables and their only purpose it to draw your combo pieces. However, there may be situations where silencing a minion or removing a weapon or even rush is really important. So, always consider these options.

The first two are early plays that allow you to draw (and Starscryer also improves your chances to draw Sorcerer's Apprentice from Witchwood Piper). The other two are the most crucial combo pieces. If you happen to have the Apprentice and Chandler, you may keep the third most important combo piece: Mana Biscuit or Elemental Evocation

Keep vs aggro or combo decks: Inconspicuous Rider or maybe Ice Block. Maybe Frostweave Dungeoneer or First Flame. But you should realize that it may slow you down considerably.

Everything else you should normally throw away because potential good redraws from mulligan are more important.

The key to winning is to draw efficiently. When you need a particular combo piece you should always order your draws correctly.

Let's assume the situation: You are missing a Sorcerer's Apprentice and you have 4 mana, Starscryer on board and Frostweave Dungeoneer and Rustrot Viper in hand. The correct order is to sacrifice Starscryer and play Dungeoneer first thus thinning your deck and increasing your chance to draw an Apprentice.

But let's assume the same board and hand state but now you have both combo minions and need an Elemental Evocation and other spells to cycle. Then the order will be the opposite: first draw with a tradeable because there's a higher chance to draw a spell from your deck before your tutor two of them using Starscryer and Dungeoneer

For the same reason, you almost never want to cast Ignite until you're doing the combo because by shuffling another Ignite into the deck you're decreasing your chances to draw an important piece.

Time is another very important resource. When you're doing the combo and only Ignites are left in the deck, casting one Ignite takes about 5-6 seconds if you do everything quickly. You need 6 Ignites if your opponent is at 27 health or lower which is about 30 seconds. So, you need to always decide if you start the combo next turn and to not hesitate a second. You have very little time to think on the combo turn, so you have to use your previous turn's time for the thinking. The pretty standard way of thinking is something like "If my next turn draw is a fire spell I start a combo immediately" or "My only chance is to try the combo next turn anyway even though I might not have enough spells, because I die otherwise. So my plan is to trade for a spell first and then go".

Overall, as a combo deck, you should absolutely smash any kind of control deck except for the ones that are designed to disrupt you (through increasing spell costs or pulling combo pieces out of your hand). Aggro is always hard as you need no to die until your "go" turn and also gather all required pieces while doing that. However, all aggro matchups are at least 50/50 and usually better. My biggest nemesis was Flamewaker Combo Mage because it's a bit faster (and you don't have enough minions to offset Flamewaker damage) and it has a very cheap Ice Block. This is the only matchup where I have a negative winrate in Diamond.

I will list the most common matchups that I encountered between Diamond 5 and Legend below.

Hunter - it's normally an Odd Defend the Dwarven District version. Normally they aim to kill you on turn 6 or 7 with their improved hero power. You should be faster than that, that's why it's a good matchup for you.  Ice Block is almost useless here because they run Flare, so if you want to cast Ice Block,make them use Flare for draw and then cast it. Also, if you have an equivalent choice between playing a minion and doing something else, don't play a minion as they need minions to progress their quest.

Druid - Usually a Celestial Alignment version. If they do play Celestial Alignment and you have most of your combo ready, it's actually the easiest matchup because with 2 mana you can do the combo for free. The only problem may be their high armor. You may have to kill them from 45 or even 50 health but that is doable, trust me. To do that you need to have to use less time on cycling (which means more mana or more combo pieces in hand)

Warrior - Always the Raid the Docks aggro pirate warrior. Can be problematic as they very often will kill you on turn 5. So, this is the matchup where I would keep First Flame to kill their early threats and Ice Block in the mulligan. Also, early minions are important here.

Mage - Mostly the Flamewaker combo mage which draws a lot and reduces card costs , and then kills you with Flamewaker and a couple of Sorcerer's Apprentices. It's a hard matchup. My advice is to use your Ice Block and not give them easy targets for Siphon Mana. Make them pay for that honorable kill

Shaman - Freeze Galakrond variant. It's the easiest matchup that is very hard to lose. They will not have enough threats to kill you before your combo is ready and they do not have means to protect themselves

Warlock, Priest - They are rare and normally control variants. Those are easy for you but they will often run disruption stuff which you should be aware of and play around.

I recorded two Legend games I played and added comments on my decisions.

Also, this is a pretty epic game where I killed a druid from 76 to 0 in 1 turn (10 ignites from 3 to 12 damage). This clearly proves that even though it may be hard, the deck can do significant amounts of damage in a single turn.

If you have questions feel free to ask in the comments.
Posts Quoted:
Reply
Clear All Quotes