Got to Legend from Bronze with a 10 star bonus with this deck with a 68% winrate.

2. Matchups - Goes over the matchups you face for each class and provides some matchup specific tips.

3. Stats - Provides some stats for this deck's cards in terms of mulligan, drawn, and played winrate.

6. Sample Games - At least one game vs each class to show the gameplay of this deck.

7. Conclusion - Some final thoughts on the deck.

Against aggro: Use your removal cards to remove their boards and run them out of resources while using your healing to stay alive. Then, you can win by dropping Dragonqueen Alexstrasza, a Kazakus, Golem Shaper golem, or Shudderwock to take control of the board and easily push face.

Against combo: There are 2 ways this deck can beat combo. First is try to have a board presence, and use Loatheb, Shudderwock with a Loatheb effect, and Zephrys the Great and lethal them before they can combo. The other way is to use Dirty Rat, Mutanus the Devourer, and Shudderwock to repeat those effects to disrupt their combo. You can use Brann Bronzebeard to double up on these effects and Zola the Gorgon and Spirit Echo to get more copies of them.

Against control: You want to remove their boards and try to be greedy with your value. Use Diligent Notetaker and Spirit Echo as an infinite value combo, returning key minions to your hand indefinitely. Try to use Zola the Gorgon on Loatheb to play 2 of him, so that when you play Shudderwock your opponent won't be able to play spells on their turn. Feed Shudderwock further with Mutanus the Devourer and Dirty Rat to remove some of the value of the control deck, and play Dragonqueen Alexstrasza before as well to be able to have a large board protected by a double Loatheb effect as a finisher. You should also try to manipulate Zephrys the Great to give you Lord Jaraxxus, which can be done by playing him on turn 8 or later when you have 2 or less mana remaining. You can play Shudderwock just with multiple Mutanus the Devourer and Dirty Rat effects without Loatheb to get rid of opponent value and then try to win in fatigue or with Lord Jaraxxus if you didn't draw Loatheb and are near turn 10. Try to play Galakrond, the Tempest before Lord Jaraxxus if you can but it's more important to be Lord Jaraxxus against control than Galakrond, the Tempest.

Aggro and combo matchups are a lot more straightforward than the control matchup, and you win against aggro and combo more often than you do against control. However, control matchups are very winnable if you maximize your value while using Dirty Rat and Mutanus the Devourer to minimize theirs, Loatheb to push for surprise lethals, Shudderwock with different powerful effects, the infinite value combo especially if you can bait out their silence effects, and using Zephrys the Great to become Lord Jaraxxus.

Demon Hunter - Mostly odd demon hunters, you have a lot of removal and healing so should be very favored.

Druid - A lot of slow combo druids that you can destroy with Mutanus the Devourer and Dirty Rat and using Shudderwock to repeat those battlecries. Sometimes you can even use Loatheb to win by board pressure. Very favored. Also a lot of aggro druid which you should destroy with all your removals and heals, so also very favored.

Hunter - Mostly even hunters, you are again very favored due to all your heals and removals.

Mage - Some combo mages, feels slightly favored because of all your combo disruption. Reno mage was rare but very favored, they just can't deal with your Shudderwock and Loatheb effect most of the time. Secret mage was slightly favored, really depends on Zephrys the Great and Reno Jackson. A tip is before playing the Firemancer Flurgl and Toxfin combo to wipe their board test for Explosive Runes.

Paladin - Slightly favored, odd paladins. Just use your removals and try to establish a board, Galakrond, the Tempest and The Lurker Below help with that.

Priest - Very favored vs reno priests, you have a lot of disruption to ruin their combo. Favored vs big priests, you need to use your removals well and bait them to maximize value and use Devolve and Zephrys the Great to ruin their ress pool. You can sometimes win with Shudderwock or Loatheb but running them out of resources and winning in fatigue is very doable.

Rogue - Mostly kingsbane rogues, it's even because you can keep their board clear but they can push a lot of face damage with their weapon. You need to try to heal, establish a board, and kill them before they kill you.

Shaman - Reno Shaman is favored, most Reno Shamans are a pure combo version right now so you can disrupt them better than they can disrupt you. You have a lot of value and don't care even if your Shudderwock is destroyed in this matchup while they just lose if you can hit a key combo piece like Shudderwock or Grumble, Worldshaker. Murloc shaman is also favored, if you remove their early waves then they run out of value and Zephrys the Great into Hungry Crab early can win you board control.

Warlock - Reno warlock was even, they sometimes have Tickatus but you have a lot of removals and Devolve for their boards and Shudderwock with a Loatheb effect is a good finisher. You also have Mutanus the Devourer and Dirty Rat effects which sometimes win you the game. Discard warlock was favored, you have to just keep the board clear and eventually they run out of value and fatigue. Darklgare warlock was even, you have Toxfin and Firemancer Flurgl to deal with their Loatheb turn.

Warrior - Odd warrior is favored as you should have too much value for them to handle, pirate warrior is even you need to shut down their board but they have a lot of weapon damage and you often need Reno Jackson to survive. 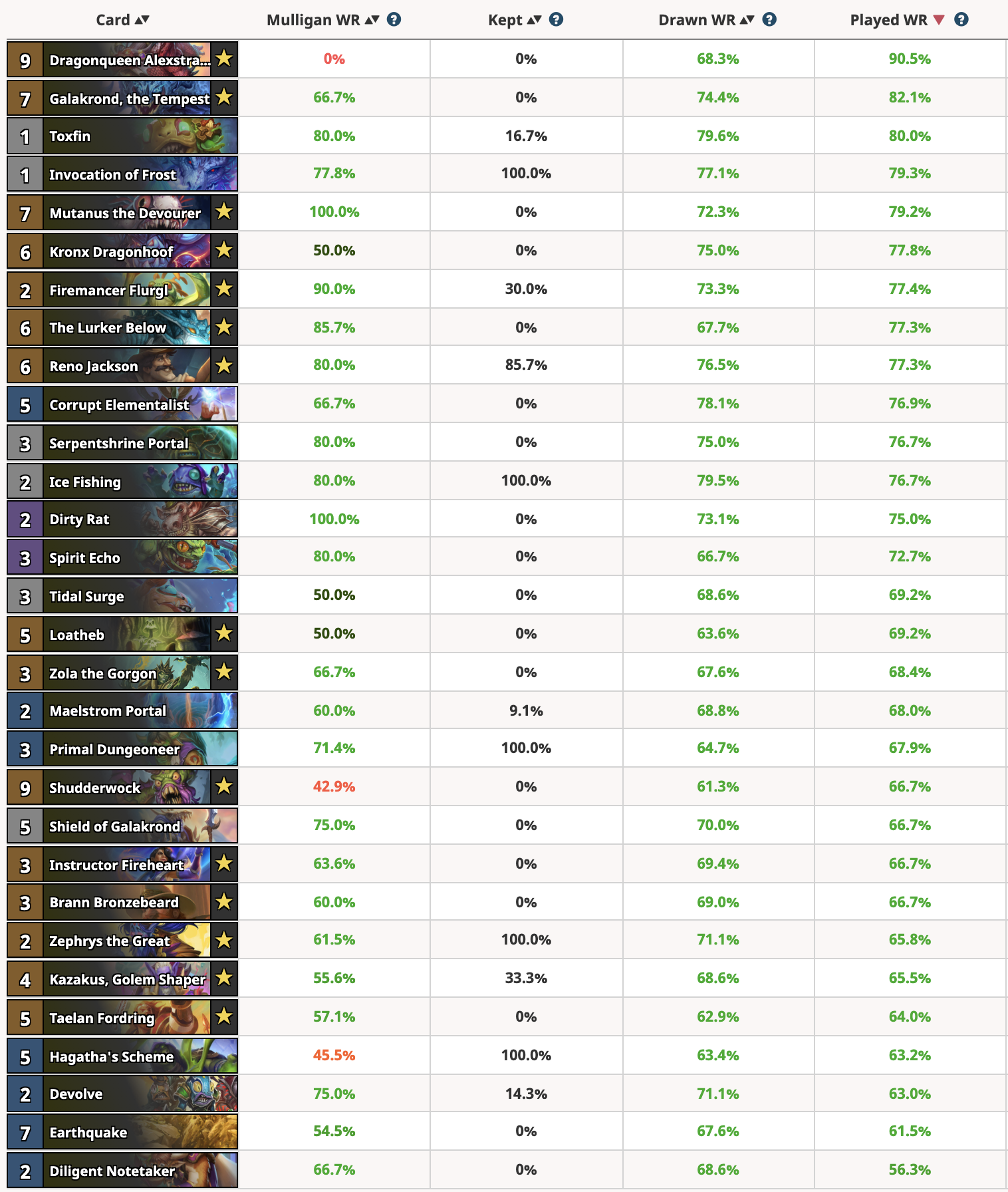 Here are some stats regarding mulligan winrate, drawn winrate, and played winrate for the cards in this deck. 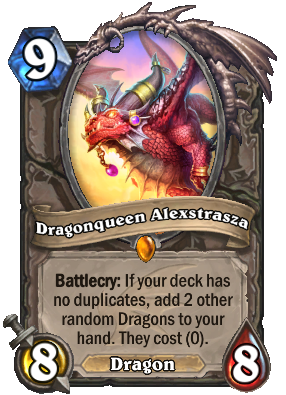 She provided a lot of pressure to finish off a lot of decks after your removal dealt with their early waves, and had a 90.5% played winrate. She also provided dragons on the turn Shudderwock was played which in addition to a Loatheb effect was often a game winner.

Keep Ice Fishing, and if you have Ice Fishing in hand then keep any one murloc out of Firemancer Flurgl, Toxfin, and Mutanus the Devourer.

If against priest, keep Devolve because most priests are big priests.

Keep Maelstrom Portal if against paladin.

Keep Reno Jackson unless against priest.

Keep Dirty Rat against druid, it's good against both combo druid and aggro druid.

Diligent Notetaker + Spirit Echo = Infinite value. Diligent Notetaker will give you another copy of Spirit Echo and will itself go back to your hand when it dies. In most cases you should use these cards individually, but it's something to look for in matchups where you need value. You can keep using this to copy any other minions including the Firemancer Flurgl and Toxfin combo. It's vulnerable to silence but many decks don't run silence now.

Taelan Fordring will draw either Shudderwock or Dragonqueen Alexstrasza for you, both very powerful cards.

You can play Dirty Rat with Brann Bronzebeard or Zola the Gorgon the same turn you play Firemancer Flurgl and Toxfin to destroy extra minions from your opponent's hand.

For Kazakus, Golem Shaper a great golem to look for against big priest is the 10 mana poisonous one with battlecry deal 3 damage to all minions. You have half chance of discovering it and it's a one sided board clear.

Especially against aggro, do not wait to fully upgrade Galakrond, the Tempest to play it. You want to focus on tempo and survival.

Brann Bronzebeard with Kronx Dragonhoof or Galakrond, the Tempest are powerful combos to look out for.

Primal Dungeoneer will often draw Zephrys the Great for you.

Unless you are desperate, you should wait to draw one murloc before playing Ice Fishing. This increases the probability to have all 3 murlocs in hand earlier in the game.

Try to keep track of what battlecries you have played to plan your Shudderwock turn. Mutanus the Devourer and Dirty Rat are great vs combo decks, Loatheb and especially Loatheb into Zola the Gorgon into another Loatheb can be great for a finisher versus control decks. Reno Jackson will make Shudderwock an extra heal and is great vs aggro. Also do not wait for full value for Shudderwock before playing it, in most cases it's better to play it early as a power turn especially against aggro.

Overall, this deck is very fun to play due to having a lot of disruption, value, and removals and heals to survive against aggro. It really had no bad matchups, you can see even the worst classes for it were at a 50% winrate. It had a 68% winrate and you should be able to climb to Legend with it while enjoying the games, for me this was one of the most enjoyable Legend climbs ever. Hope you enjoy the deck, and if you have any questions or comments about it comment below.