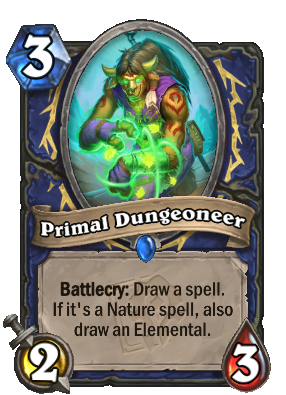 Hey y'all, GamerPanda here, excited about the release of Wailing Caverns today.  After hitting Top 500 last month I spent most of the remainder of the time messing around with a Doomhammer Shaman build (I'm a Rogue main so my usual deckbuilding involves tempo and burst damage).

With the new set's Primal Dungeoneer, Shaman has been given a critical draw tool that it was lacking previously.  This card is clearly meant to marry Elementals with Nature spells, so I designed a deck that included only nature spells and tried to eliminate as much of the Overload as possible.

Wailing Vapor is a great card for the early game that also steps up the power level of Elemental Shaman.

UPDATE 6/8:  I dropped Vashj because there weren't enough spells and Dungeoneer helped draw what was needed. I put in a lightning bloom (just 1 for emergency use) and based on your comments I swapped the Fire Elementals for the cheaper Lilypad Lurkers to help with targeted removal.  Thanks for your help in playtesting. I'll keep updating so long as you keep commenting.

I am not playing HS right now (on a Skyrim binge) so I won't be playtesting the list further at the moment but will check in on your suggestions based on your experiences and update when I can.

I still plan to expand the guide if as soon as a more finalized list is decided upon! (which looks like a day or two with no major constructive criticisms/suggestions along with positive feedback) Thanks for the interest, everyone :)