Hi Guys, my name is sOdArIk and I’m from Germany.

At the start of the new expansion I thought to myself: If there is a no minion Mage, there has to be a deck with no Spells. And born was the no spells Deathrattle Demonhunter :D

I played the deck since day one of the expansion. The deck survived deck of Lunacy for 2 mana and the horde of paladins which followed after the nerfs.

I played different versions of the deck and want to show the one (v2.4) that got me to legend this season. 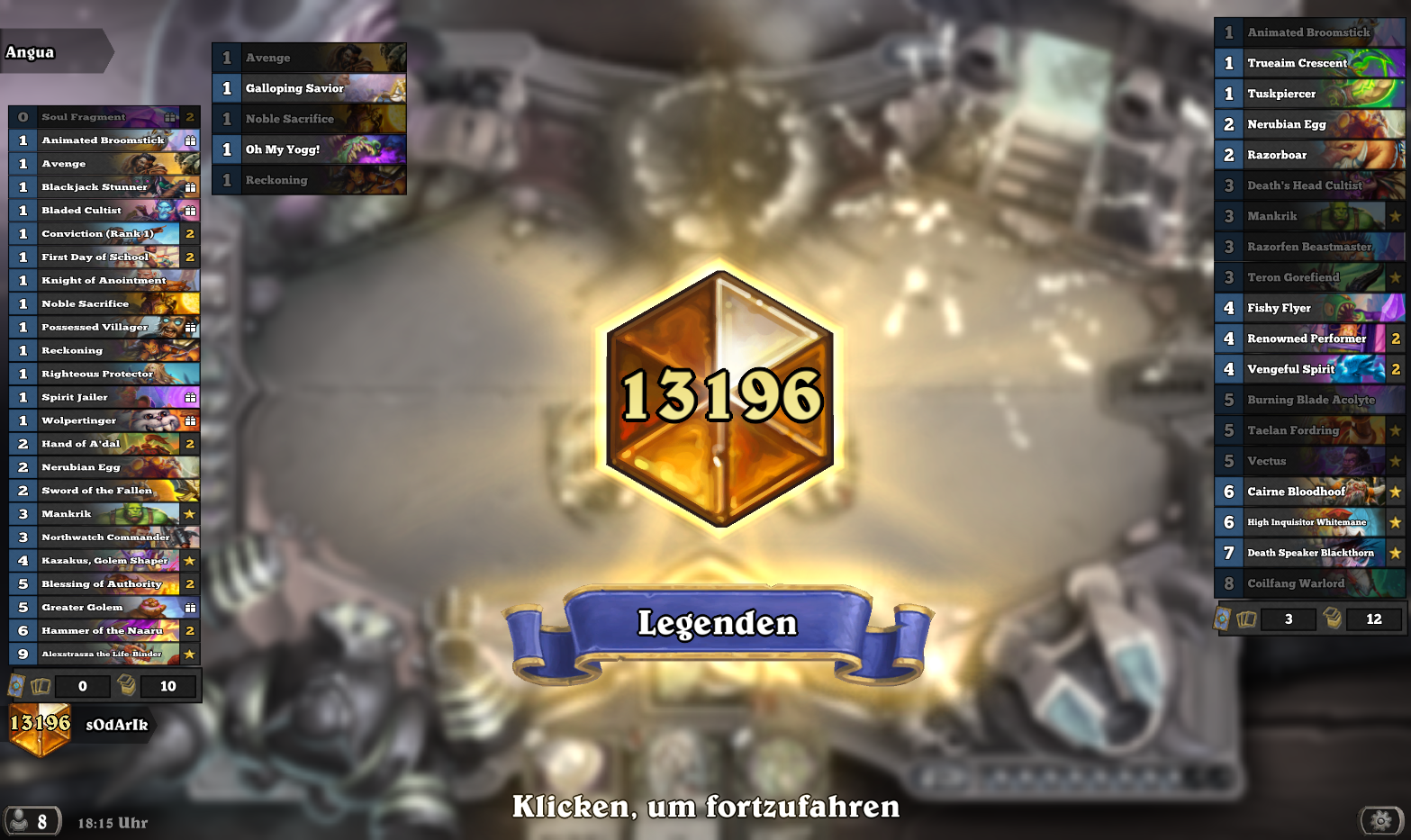 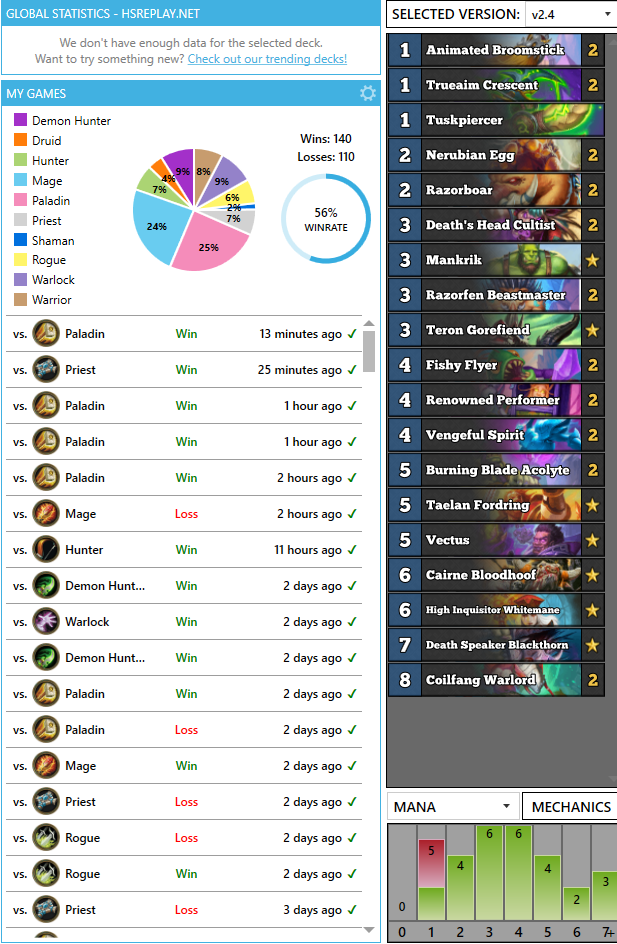 These stats include the last season too. 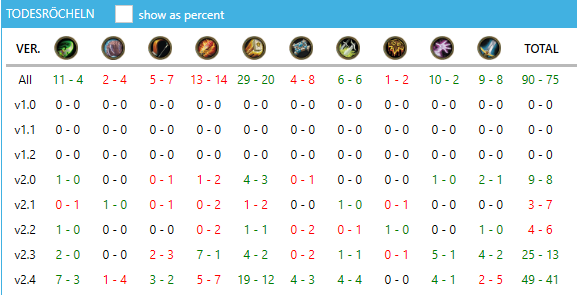 These stats are only from this season.

Because the deck has no spells it is a heavily board focused one. You win by conquering the board and overwhelming your opponents with your army of deathrattle minions.

The hardest matchup by far is vs Priest (all variations)

So every matchup except for Priest feels winnable!!!

Benefits for heaving no spells?

Oh My Yogg!, Counterspell, Netherwind Portal and Dirty Tricks are nearly useless and Ogremancer is just a 3/7
And the most important...You play a cool deck!!!

Animated Broomstick
One of the most important cards to conquer the board. Sometimes you have to play it only for one minion. Can be game winning in the right situations.

Trueaim Crescent
This is your boardcontrol tool number one. It allows your minions to hit face, trade afterwards and activate your deathrattles in the right moment.

Nerubian Egg
Board protection. Sometimes you eggtivate (hahaha) them yourself with Trueaim Crescent or Teron Gorefiend.

Razorboar (WTF why is that a beast?)
Bread and Butter for early game. Pulls out your Nerubian Egg, Death's Head Cultist and Razorfen Beastmaster. (OK, OK, sometimes it pulls Teron Gorefiend but a free 3/4 is better than nothing ;))

Death's Head Cultist
The only way to regenerate your life. Important vs early aggression from Hunter and Demon Hunter.

Mankrik
Even after the nerf, Mankrik is very good in this Deck because normally you draw very well.

Razorfen Beastmaster
Same as Razorboar. You can pull off good combos with Animated Broomstick and your rush minions.

Teron Gorefiend
Beside Trueaim Crescent your activation tool for the deathrattles. Can be game winning in the right situations.

Vengeful Spirit
Draw tool and one of the best cards in this deck! (OK, OK sometimes it is only a 4/4 for 4 Mana)

High Inquisitor Whitemane (Core Set Legendary)
Very good card which can win games on its own.

Death Speaker Blackthorn
He’s the guy that allows us to play this Deck. Best Card in the deck by far!

Coilfang Warlord
Lategame control tool and serious threat for the opponent if he's in his rushform on board.

Teron Gorefiend
An eggcellent combo is Turn 2 Nerubian Egg into turn 3 Teron Gorefiend. If you have a little followup the board is yours most of the time.

You should only play Teron Gorefiend on Razorboar and/or Razorfen Beastmaster if they can pull something from your hand and the boardstate allows it.

If you can sent a “filled” Teron Gorefiend into a minion with your Trueaim Crescent and have Animated Broomstick as a followup you can really turn the tables and win games that you never thought you would.

It’s turn 5 and you have a Razorfen Beastmaster in play. The opponent doesn’t want to kill this minion yet on his own and leaves him alone. Now it’s turn 6, you trade the Razorfen Beastmaster into an enemy minion, it pulls Fishy Flyer or Renowned Performer from your hand. You trade that minion too and play High Inquisitor Whitemane. You cleared the board and have a large board on your own.

You trade Taelan Fordring and resummon him and so on…

With a good curve it happens that you have Death Speaker Blackthorn, the Coin and Animated Broomstick on turn 7. This combo can swing the board in your favour with the right pulls.

Cards you should always keep with or without the coin:
Death Speaker Blackthorn except vs Hunter (highest priority!)

If you have Nerubian Egg and Teron Gorefiend keep both!

Razorboar and Razorfen Beastmaster, even if you don’t have a minion they can pull.

Trueaim Crescent except for control matchups.

Don’t always coin Death Speaker Blackthorn on 6. Only do so if you are in need to and have a strong followup.

If you want to see replays vs the other classes tell me and i will add them :)

And now pls try to enjoy the Deck ;)