I wanted to share this deck with you that I used to go from 3500 legend to 1800 now with a 64% winrate, and hopefully climbing further in the coming weeks. It's a more controlly version of the classic Deathrattle Demon Hunter that has seen small amounts of play this expansion, with the addition of N'Zoth, God of the Deep as sometimes a finisher and other times as a great way to gain board control back. 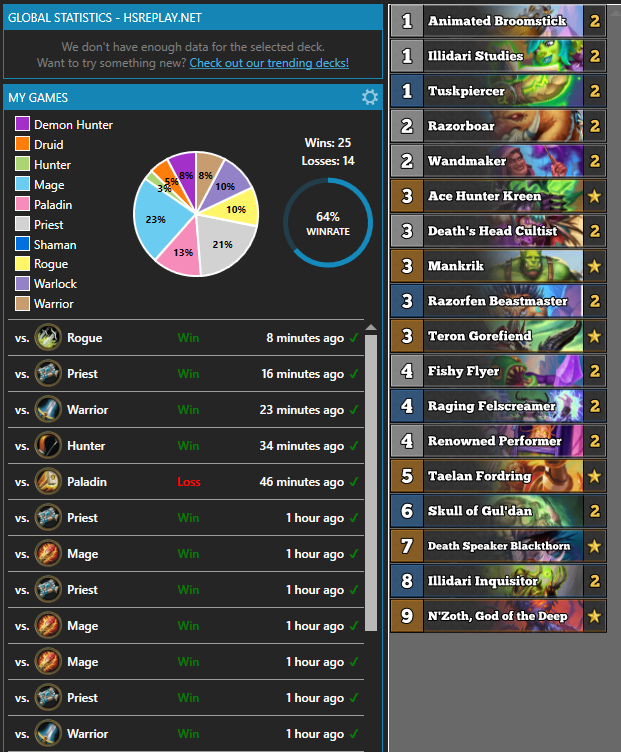 While I certainly don't like the way Blizzard massacred my favourite 10-mana old God by reducing him to 9 mana, it is a giant buff for this deck. Being able to both play N'Zoth, God of the Deep and heropower on the same turn, ensures your Illidari Inquisitor can attack immediately face if it has died in the earlier turns, acting as the finisher mentioned earlier. Not having the need to have a weapon equiped in order to do this combo helps a lot.

A (in my opinion) great addition to this deck, and maybe also a bit of an underdog nowadays, is Animated Broomstick. You can immediately rush in Razorboar or Razorfen Beastmaster to trigger their deathrattle on the spot, or even better, rush in with all your minions summoned from Death Speaker Blackthorn to gain a massive board wipe and still be left with minions summoned from your Razorboar, Razorfen Beastmaster or also Renowned Performer. This can of course also be done in combination with N'Zoth, God of the Deep, once again, taking advatange of its new reduced cost.

Taelan Fordring is also an absolute beast in this deck. It is a great pull from your Death Speaker Blackthorn and tutors out your N'Zoth, God of the Deep, or if he is already drawn, your Illidari Inquisitor, which is essentially your big game-finisher.

[UPDATE]
In the last revision, 2 Venomous Scorpid were added in place for 2 Wandmaker due to the suggestion of Alex. They essentially serve the same purpose, generating value in the early game. However, the discover from the Venomous Scorpid makes it way more flexible for the different match-ups. It is also a great combo with either Ace Hunter Kreen or Animated Broomstick. Rushing in your poisonous minion to kill a big taunt of the enemy or protecting it with being immune. It has won me several games already, so thanks for the suggestion Alex! The deck is now going 43-27 for me, so a WR of 61%, currently sitting at legend 1190. We'll keep it going.

As promised, I will post often occuring match-ups here and how I tackle them:

A favoured match-up, I have been going 8-3 against priests, and always with the same sort of gameplan. Try to have a decent opening, as usual with your Razorboar, Razorfen Beastmaster and any deathrattle cards. If you don't have these in your mulligan, try to keep a Fishy Flyer to kill their Sethekk Veilweaver if you don't have the required earlygame. In the midgame, we are mainly looking for 2 cards, our Venomous Scorpid and our Illidari Studies. These cards can find us a Felosophy for us to copy our Illidari Inquisitor. This card is the key to victory in this match-up. Copying discounted Illidari Inquisitor from your Skull of Gul'dan gives great burst potential when you have your Tuskpiercer equiped. Otherwise, try to play your Illidari Inquisitor one by one, such that the Priest does not got too much value from one of their boardclears. When you assume he has a board clear, try to play your Razorboar and Razorfen Beastmaster with deathrattle minions in hand such that you still have a board left after the boardclear and can keep pushing face. With N'Zoth, God of the Deep, we will revive another Illidari Inquisitor, giving us a total of at least 3, which normally is enough pressure to kill the opponent. 9/10

Finally a match-up in which Teron Gorefiend can shine. This match-up is focussed around protecting your taunts (your Death's Head Cultist and of course also Renowned Performer) and then eating them with your Teron Gorefiend. To cheat out your Renowned Performer early, keep Razorfen Beastmaster again in your mulligan. Razorboar is less important since you can also play Death's Head Cultist from hand and then eat it with your Tero Gorefiend for immediate heal and a taunt later on. Having a combo turn with Teron Gorefiend and Animated Broomstick ensures you can eat some of your taunts, trade an enemy minion away and be left with your resurrected +1/+1 taunt minions. Staying alive is key in this match-up. About a 50/50 match-up, it depends on how Godly the Rogue draws.

This matchup is all about board control, keep Razorboar, Razorfen Beastmaster, Tuskpiercer and any deathrattle minions you can pull from your Razorboar and Razorfen Beastmaster. If you have got a decent opnening hand already, it is key to also keep Ace Hunter Kreen, having favourable trades versus a paladin is all you need to win this match-up. Having a Venomous Scorpid + Animated Broomstick ready for when they play their Libram of Hope also pays off big time. However, without a good early-game, this is a very hard match-up. To come back on board in the midgame, try to safe an Animated Broomstick in combination with your Death Speaker Blackthorn if that is your last hope to get board control back. It is a hard match-up (2-5 for me): 3/10.

As the name suggests, this match-up is all about tempo. Once again, try to have your synergy cards Razorboar and Razorfen Beastmaster ready to get early board control and establish it by playinf Ace Hunter Kreen. From your Venomous Scorpid, genrally try to look for a Chaos Nova or, even better, a Cycle of Hatred. When they do their Field Contact combo turn, they are likely to have many small minions on board, which you can easily clear and create a threatening board yourself with Cycle of Hatred. From your Illidari Studies, you can search for Glide. Either to let them go down from their full hand to only 4 cards, or to screw up their Alexstrasza the Life-Binder combo-turn after the first time they have played it. This match-up plays pretty similar to the paladin, get board control and keep it and also try to break their combo pieces. Good match-up (7-3 for me), 8/10.

The deck we just love the play against on ladder. Although I have not faced them last 2 days on ladder, I did face them a lot a week prior. Since they have Devolving Missiles, they can disrupt our deathrattle combo turns. So getting just a bit of value from your Razorboar and Razorfen Beastmaster is already good. If you have an opportunity to play your Teron Gorefiend, try to rush it in with Animated Broomstick such that you get immediate value from its deathrattle. Death Speaker Blackthorn is also a great card in this match-up. Mages don't have that much big board clears in their deck (some not even running double Flamestrike), so having a wide board protects your face into their Mask of C'Thun turn. The rest of the match-up is pretty general. Apply pressure such they are forces to put their spells into your minions instead of to your face. Since we are a value deck, they are likely to run out of steam earlier then we do, so as long as we live, we should be fine. Of course, them not drawing double Incanter's Flow in the early game will also massively help. Again a 50/50 match-up for our deck.

Please post any questions or any comments you have down below, and I'll try to look at them frequently. If you would like to see any other match-ups, let me know and I'll try to tackle them. For now, I wrote down the match-ups that I come by most often on ladder.

Have a good one,
Piggie