Hello everyone I'm Spark, Legend player from Hearthstone and today I'm sharing with you my Mech Tempo Rogue which helped me hitting Legend with the release of GvG.

I have quite some background with Tempo Rogue since I've always enjoyed this kind of playstyle and the class is well suited for that, here are my Tempo Rogue from Season 1 and Legendeath adaption from Naxxramas (which has been updated since GvG, don't hesitate to check this out).

This one is an Aggressive Tempo Deck that revolves around Mech synergies and makes great use of Spare parts to control the board efficiently, enable combos and refill your hand with Gazlowe.

Backstab, Deadly Poison, Blade Flurry, Eviscerate, SI:7 Agent are all core Rogue cards that I've always used in Tempo Rogue since they allow for some efficient board control while developping your own threats.

Azure Drake and Bloodmage Thalnos complements perfectly this set of removals as they empower them while developping your board and drawing a card to keep up on that, I've tried something without those first but I felt like I was lacking something and they came back as the icing on the cake.

The neutral set from GvG provided some really strong interactions around Mechs so before explaining them more in depth, it's pretty interesting to look at some good class specific Mechs and how they fit a playstyle or not.

Goblin Auto-Barber may seem like a very small contribution at first glance but then you realize that it's everything a Tempo Rogue would love : an early body to play that can have an immediate impact on the board like SI:7 Agent.

Sometimes increasing your weapon from 1 to 2 damage or from 3 to 4 can totally change the nature of your turn by killing an opponent's threat efficiently while developping a 3/2 body.

Contrary to Deadly Poison, don't hesitate to use it on the last charge of your weapon if it can make your turn efficient, this is all Tempo Rogue is about : gaining momentum ;)

I won't write walls of text to explain why this card is good, Mechwarper gives an amazing mechanic while being on a well costed 2/3 body, that's just amazing and Affinity Decks already proved it in Magic: The Gathering !

This is especially true for Decks that are trying to achieve Tempo like this one or Zoolock since it increases the pace at which you develop your board. Also note that it helps enabling combos for Rogue.

The other interesting card that encourages us to use Mechs is Tinkertown Technician. A 4/4 for 3 mana is already very good but then the Battlecry comes in as the icing on the cake as it gives a Spare part.
I ended up excluding them for tech cards such as Big Game Hunter and Iron Sensei ;)

Clockwork Gnome and Mechanical Yeti are also giving you some Spare parts while being pretty good on curve Mech minions so they are perfectly suited for the Deck.

Toshley has made an appearance in the Deck since I opened it in a pack because of its great body and the fact that it provides you 2 spare parts which obviously synergizes pretty well with the Deck.

Spare parts are really useful spells for Decks that try to achieve board control through minions and a few spells and even though you get them at random, all of them can find their utility later on and some of them are even pretty good as stealthing one of your big you or freezing an ennemy threat can be game changing.

Bouncing back Loatheb, Azure Drake or SI:7 Agent after trading them to heal them and re-use the Battlecry effect is also pretty strong, especially considering the fact that you're not using a slot of your Deck for that purpose (I'm looking at you Shadowstep).

In the end, those little spells are already good on their own and Valeera must feel pretty happy about having efficient combo starters and Gazlowe is probably the most excited as he will be able to call some friends to join him for the battle !

The final mechs are Harvest Golem, for its stickiness which can fight aggressive Decks pretty well, and 2 amazing cards that have been added to the game : Piloted Shredder and Piloted Sky Golem.
The fact that they have already pretty good offensive stats makes them perfect for these slots and their Deathrattle effect are just too valuable as it will force bad trade from your opponent and you'll be amazed by the amount of how your Deck can actually use some decent but niche minions ;)

Iron Sensei completes this set of Mech interaction by powering up your other Mechs, which kinda protects him as threat despite its weak body.
I wouldn't commit more on him since it competes with pretty important cards for this slot and its effect is somewhat situational. I feel like this strategy would suit better an Aggro Mech Rogue using Jeeves.

Finally comes in the very awesome Gazlowe, I already talked about Spare parts a lot so I think you got it, if you can have some of them or deadly poinson in hand before summoning him you will be able te refill your hand pretty efficiently.

Don't hesitate to dump the less useful ones for no real value when doing so since the Mechs Gazlowe will provide are pretty much all pretty awesome and you can actually steal Mech interactions from other classes, which is pretty cool !

Honestly, I first thought that it wasn't necessary for the Deck to work and indeed when you are drawing on a pretty good curve you will win without it.
But then will come some harder games, where the Tempo advantage is switching between you and your opponent and you can't quite finish off the game, beginning to run out of steam and yes sometimes he will come and save your ass. Sometimes he won't but, I mean, you can't win every game obviously ;)
Moreover, he is a hell lot of fun and I may underestimate the impact that he had in my wins so far. 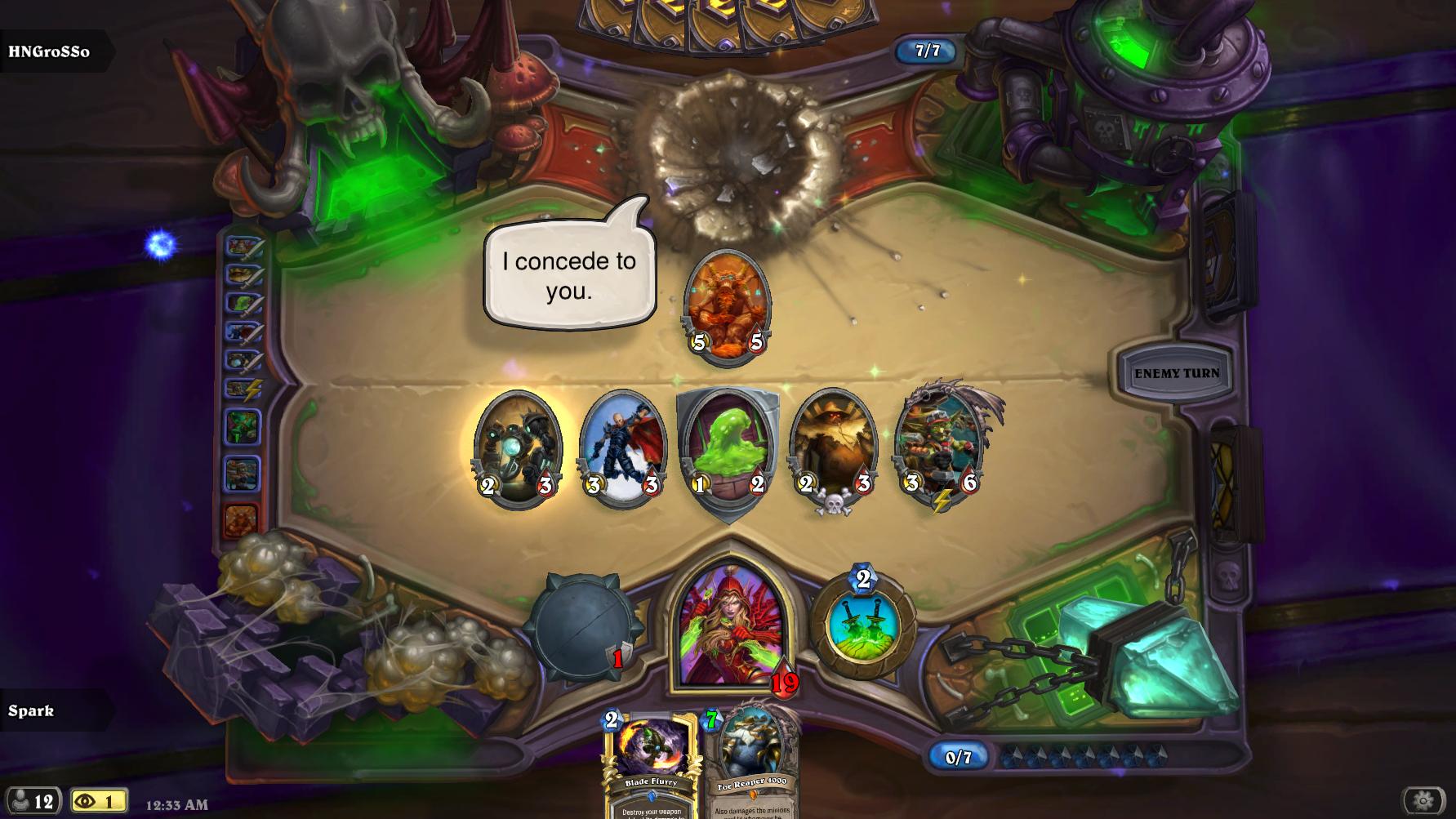 An example of Gazlowe rewarding me for playing him ! And a Druid conceding ... not today Foe Reaper 4000 >.<

Replacement : I didn't really thought about it since I simply obtained my Gazlowe during Pack busting but I understand it's not necessarly a high priority craft. If you don't have it, I would suggest you to try out one of your most beloved win condition available in your collection or more simply a Sprint.
Let me know in the comment section how the replacement is going for you ;)

When I first built the Deck, I kept a solid basis from my Legendeath using Undertaker and his friends to mix it up with Mechs similarly to my Mechanical Zoo.
But then I realized it forced me to get rid of some very important cards and the Deck tended to be less consistent since I either crushed my opponents in a very snowbally way or just ended up running out of steam.
Since I still feel like GvG can improve my older build, I updated it so I'd recommand checking it if you're more interested ;)

Here is the initial list for those of you interested in the starting point : I was using 2x Harvest Golem instead of 2x Spider Tank, 2x Sludge Belcher instead of 2x Azure Drake and the biggest issue was 2x Undertaker instead of 2x Tinkertown Technician which was making the curve more aggressive and less sustaining.
As you can see, I was still pretty close to my final list already but I feel like the current one is more optimal.

Compared to Harvest Golem, Both are sticky in their way so they are definitely good to justify Tinkertown Technician and Iron Sensei.

I feel like Harvest Golem suits better the Rogue gameplan as it allows to split your damage efficiently to control the board, especially against aggressive Decks.

Loatheb is still a really strong tool to use after the new expansion as it prevents board wipes, can set up lethal or stop your opponent from finding it.
It's both good to increase your momentum or coming back from slightly behind so you should definitely use it if you're lack a card from the Deck.
He was initially in the Deck but I decided to replace him with Toshley when I opened it in a pack.

One last thing, rarely but sometimes the lack of taunt will hurt you because you won't be able to save your ass for one more turn with Defender of Argus or Sludge Belcher. Yes it is true, so just accept this fact as finding room for other cards is near impossible (explanation at the top of this section) but feel free to try it if you really want to.

The Deck tend to not really need that anyway and the load of Spare parts producers in the Deck can also give you something you are looking for ;)

I've uploaded some basic recordings of interesting games ! Beside the results, it shows some of the Deck's interactions through funny and challenging games ;)

I feel like the Deck is really strong for ladder play since Tempo Rogue has always been good at dealing with semi-aggressive Decks which generally pollute the ladder and it has an easy time beating some inconsistent Decks that some people may be running in this playtesting period.
I think that the main strenght of the Deck is being able to beat other similar Midrange Decks pretty consistently thanks to the nice Rogue's Tempo tools.

As I already evoked, it can run out of steam against heavy Control Decks so sometimes you'll have to sneak your way to find lethal or just accept the loss which kinda remind me of my Midrange Hunter actually. The playstyle is pretty similar since you want to control the board while developping your threats and pressure the opponent's life with what is remaining, it is just slightly more focused on board control.

Here are my winrates so far including Casual and Ranked games :

This is one of the Decks that I used to hit Legend since GvG is released along with my Explosive Snipe Control Hunter and my Beasty Zoo Midrange Hunter. Don't hesitate to Check those out ;) 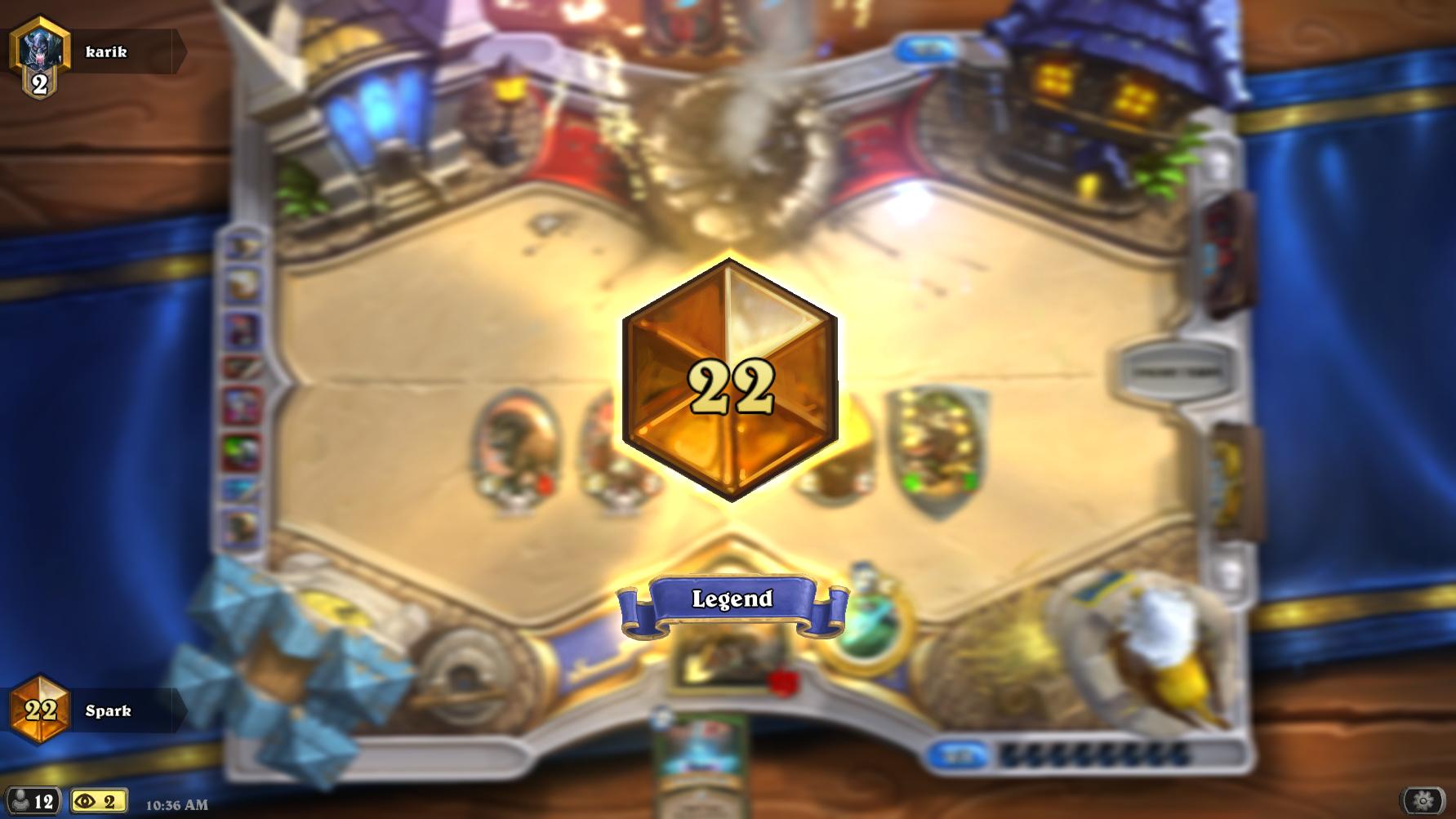