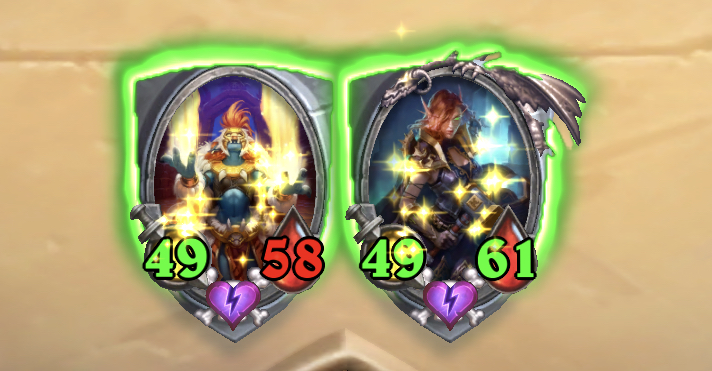 I have been playing and refining different versions of prelate paladin for the past few months, and it has become my favorite paladin archetype to play. One of the main parts of the deck is Immortal Prelates, which keep growing and getting stronger with buffs. There are multiple cards which either draw you the prelates or put them into the board, so you can get them out multiple times per game. In addition to the prelates, it has a board based playstyle of buffing minions and gaining board control with other minions that benefit from buffs such as Moonfang, Shirvallah, the Tiger and Zilliax. It has highroll potential with the High Priest Thekal and Molten Giant combo.  Finally, it has a variety of enjoyable finishers in addition to huge prelates such as Lynessa Sunsorrow and Murgurgle Prime. This version of the deck is my personal favorite and focuses on maximizing the power of Immortal Prelates and getting them out as many times as possible.

Hand of A'dal - Keep this if you have First Day of School or a 2 mana minion and the coin, this is a great buff and card draw in one.

Immortal Prelate - The most important card in this deck, try to buff both prelates as much as you can and then use other cards to get them into play. The reason it's usually better to split buffs between your two prelates is to hedge against silence. However, do not hoard your buffs, and if a good tempo situation arises from using buffs on other minions, use your buffs on those. You will have plenty of buffs for your prelates based on the plethora of buffs in the deck and Lady Liadrin giving even more buffs to hand.

Lightforged Blessing - This is a one of in the deck, you can use it on prelates or other minions and it can often give you a large heal.

Murgur Murgurgle - It's good as an early drop to survive a turn so you can then buff it due to its divine shield. It's also a good minion to get from Call to Arms. In addition, it gives you another late game threat in Murgurgle Prime.

Call to Adventure - You can use it early and even drawing Shielded Minibot or Murgur Murgurgle is an ok outcome, but late game after you have drawn them or had them pulled out by Call to Arms, this will draw you your Immortal Prelates. An interesting thing to note is that you can often use this to draw High Priest Thekal if you use it on the same turn as Call to Arms, which can be useful to keep in mind in case you have a Molten Giant in hand.

Divine Favor - This is a one of in the deck, it can give you useful card draw against slower decks.

High Priest Thekal - Keep this in the mulligan. This serves two purposes in the deck. You can play Molten Giants for free after High Priest Thekal, which is a nice highroll. The best you can do is 2 giants on turn two with the coin, but even getting free giants as tempo later in the game is useful. The second purpose this serves is that you can use your plentiful lifesteal minions to heal back up after your health is set to 1, and retain the armor. This can be useful so that you can survive certain one turn kill combos as it allows you to have up to 59 health.

Call to Arms - This gets you a board of some of Shielded Minibot, Murgur Murgurgle, and one or two Immortal Prelates. This is good early for getting a board of minions including your prelates so you can buff them next turn, and is also good later in the game to pull out your prelates from the deck.

Guild Recruiter [/card] - You want to play this after [card]Call to Arms so that you can maximize the chances of pulling out a prelate with it. This is great later in the game for pulling out your buffed prelates after they are shuffled into your deck. In addition to Call to Adventure and Call to Arms it helps you get Immortal Prelates out multiple times per game.

Lady Liadrin - She will give you a ton of buffs so you can keep buffing minions and prelates.

Molten Giant - If you have High Priest Thekal in the mulligan, then you should try to mulligan for giants for the highroll. In general, they combo with him and a late game free giant will often cause a huge tempo swing. Finally, they are useful without him if you go down to low health. Playing a giant for free and then sticking a Spikeridged Steed on it will give you a great chance to mount a comeback against many aggro decks.

Pure Prelate Paladin (most similar playstyle to Prelate Paladin but with some strong pure paladin cards taking the place of some neutral cards): https://www.hearthpwn.com/decks/1379150-pure-prelate-paladin

Reno Prelate Paladin (this deck has the most different playstyle from the other two decks, with a highlander build and a single copy of Immortal Prelate making the deck have a lot of strengths that the others don't but losing a lot of cards that synergize with prelates specifically): https://www.hearthpwn.com/decks/1379148-reno-prelate-paladin