Hello guys, I have been reaching legend with this deck 2 months in a row and decided to share it, it's fun to torture priests with it, the deck can cope with almost any opponent basically (at least the common ones). It went through some changes naturally - latest addition is Tinkmaster Overspark, performing great in the lower ranks of diamond.

Match-ups, in order of appearences in my experience:

Rogue : Odd/Pirate aggro - Great match-up for us: look for good early game cards like Eternium Rover, Shield Slam, Deathlord, Ravaging Ghoul, Reckless Flurry. Fight for the board with all you got the first few turns, usually around turn 5-6 he can't stick a minion anymore. Later we will need Gluttonous Ooze and Bulwark of Azzinoth to survive 15 damage Kingsbane hits to the face. Be careful because if you can't cope with the early aggresion you will lose fast.

Mill rogue - I only saw 2-3 I think, auto-loss unfortunately there is no point in trying.

Priest : Raza Highlander - the main reason I'm playing this deck is to torture priests. Press the button every turn, keep Deathlord (mainly to annoy him, don't expect to pull something out haha, he will find a way to play around it, it's usually not a good idea to waste a Shield Slam to activate him), Brann Bronzebeard and Coldlight Oracle to mill as many cards you can get, don't even care for yours usually. Half our deck is useless cards against him so just try mill him, press the armor button, dump your hand and play Azalina Soulthief to get those juicy shenanigans he is saving for last. Great match-up overall, still possible to lose as this deck can dish out enormous ammounts of damage before it runs out of steam. Also don't play Dr. Boom, Mad Genius.

Warlock: Discard Zoo - Same as the aggro rogue decks - fight for the board, i usually even leave Malchezaar's Imp after the first few turns, just let him draw to death and clear his board, easier match-up than rogue basically.

Renolock/Cubelock - I would say an even match-up, you can get pretty much obliterated by a good timed Expired Merchant, if they get to play more than 1/2 Bloodreaver Gul'dan and N'Zoth, the Corruptor. Try to burn a few cards, Tinkmaster Overspark is great to get rid of a big demon/cube and remove it from the demon pool. Pro-tip: as this new trick is becoming popular wait for the guy to swap your hero power and give you a shit one and then play Dr. Boom, Mad Genius. Don't be afraid to dump everything early and play Azalina Soulthief, his cards will usually be better than ours.

Mage : Assume it's Secret Mage - almost instant win, they just can't produce enough damage to get through the armor, just play around his secrets as good as you can, clear the board and press the button.

Exodia Mage - Haven't seen many but I think I won most of them - play as you're playing against Raza Priest, he is drawing a lot so it's not hard to mill him badly.

Paladin: Odd Paladin - Great match-up for us. Best cards to keep : Eternium Rover, Deathlord, Ravaging Ghoul, Reckless Flurry. The way to lose is if you leave some kind of scary board and he plays Loatheb.

Buff Mech/Libram - Ok match, look for Shield Slam, Reckless Flurry , Tinkmaster Overspark and Coerce. Play smart and try to remove his board. Against a deck like this you should try to avoid playing Coldlight Oracle as much as you can and just try to exhaust him. If you leave a big minion for 1-2 turns you may lose pretty quick.

Odd/Even Shaman - Ok match, be careful not to get crushed by Bloodlust, I would say Even variation is the easier one as with Odd there is always some lame board he is building with tokens/totems and you are constantly afraid of being burst down by Bloodlust and face damage spells.

Warrior: Big Guy/ DMH : Unwinable, what can you do... The Odd Warrior mirror will also be very hard as we are not running Archivist Elysiana, we can get his though, don't draw cards from Shield Block, this is gonna be a long one...

Druid: Any kind of Druid is an auto-loss basically, you get crushed by the Big Beast Druid and any OTK variation. Only way to win such a match is to mill some important cards, it's also possible to win against Malygos Druid with a good timed Bulwark of Azzinoth.

Highlander/Spell/Any slower hunter - cool match-up, try to get Dr. Boom, Mad Genius going as soon as you can to match his value from Deathstalker Rexxar. Usually these are long and fun games.

Demon Hunter: Sadly I don't think I've seen any these past 2 months.

Some cards you can try if you want, personally I don't like them very much : Bladestorm, Archivist Elysiana, Kobold Stickyfinger and Lord Barov 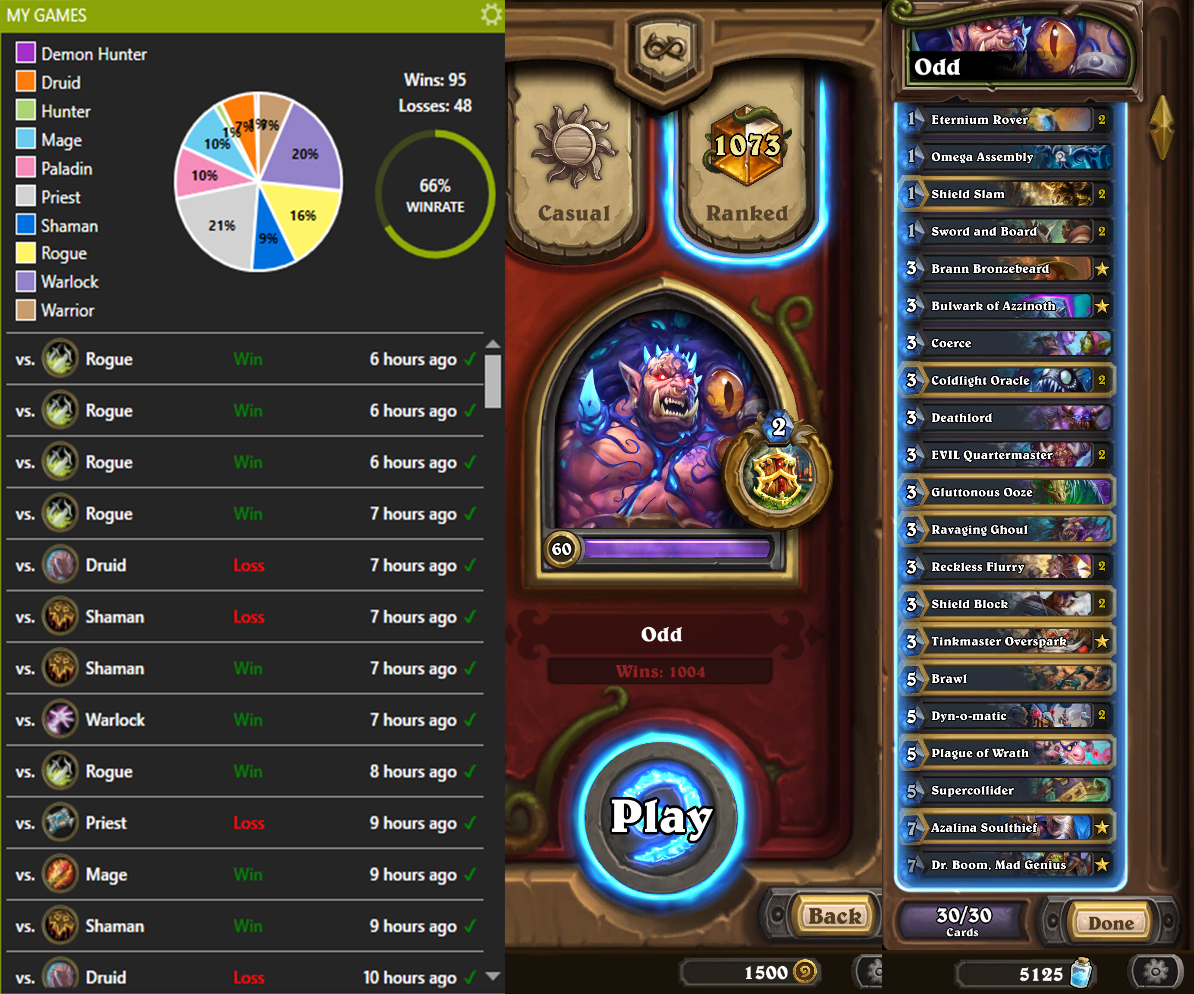