Hey, thanks for following my decks. Unfortunately this one stopped working for me after like 60 games. Atm I am barely above 50% WR, drawing complete ass. Not sure why, maybe I climbed too many ranks at once :( I was testing different builds but as soon as I make the deck more controlish - i face priests, and after adding bloodlust i face only hunters and rogues :) So taking a short break to not get tilted by this riggness.

Despite that I'm adding a short guide for ppl that still want to play it:

-Hagatha's Scheme is like a reset button, play it wisely, only to remove boards you couldn't deal with otherwise.

-Instructor Fireheart can be used as a finisher, when they leave 3-4 of your minions on board with 10 mana, play it and fish for cheap 1 mana cards to buff and deal dmg, you can easily burst ppl for 20+ dmg(when you have minions on board).

-Totemic Surge from Marshspawn with Runic Carvings can clear big boards later into the game.

-you need to know a bit of the most popular meta builds to know what cards to pick to work around your oponent plays.

Mulligan is usually never the same for me coz i try to keep combo cards and build a gameplan based on them. For example i can look for Hagatha's Scheme vs druids but i can also on coin use  Mana Tide Totem into Totemic Reflection or even Speaker Gidra and buff her with Totemic Reflection which gives you 6/9 with WF on t3. But in general best keeps are:

Rogue - keep Hagatha's Scheme, Devolving Missiles with Diligent Notetaker for edwin/questing, rather control MU untill you get them out of cards, try not to proc their Dirty Tricks if you don't have to. That said i also won few games by going wide with Lightning Bloom Runic Carvings followed by Totemic Reflection Splitting Axe and some some buffs from Marshspawn or Instructor Fireheart

I also added 2d Splitting Axe back to the list. It's too good to not have 2 of them.

Took out one Splitting Axe for Speaker Gidra. Overall I'm happy with the deck and it performs well. You also get the suprise factor. Only bad MU is druid, mage is 50/50, others are favorable.

That said it is very hard to play and I'm learning new tricks with every game. If there will be intrest I might write a short guide.

Played something different last two days. This deck absolutely gigastomps everything but druid and hunter. I have 100% WR vs control DH and Warrior which are swarming legend ladder lately. Deck is quite hard to play, I am still learning it myself but it feels really good.

The idea behind the deck is again - copying Mana Tide Totem wins you every game, so now we build a deck around this card and add the totem package. But this time we cut 0 mana cards as these are basicly useless unless you have few totems on board and guess what - Totem Shaman sucks at having a sticky board this expansion.

Far Sight has been insane in this deck, getting a 0 mana Totemic Reflection into t4 coin Totem Goliath gives us 2x7/7 on board at t4. But this is only an example. Your imagination is the limit to what you will combo with Diligent Notetaker in this deck. Value is basicly infinite.

Strongly advise you to try this one, it's so much fun! LMK if you have any questions.

P.S. How to win with this deck? Well there are kinda 2 ways to play it. Depending on your hand and matchup you either sneak a copy of Mana Tide Totem or Totem Goliath and snowball from there, or control the board with Diligent Notetaker and Devolving Missiles, Torrent and make huge board swings with spells and minions discounted with Far Sight.

One copy of Witch's Brew is here to heal yourself out of range of finishers vs mage/rogue/hunter. Just jam it when they run out of cards and you are safely out of reach with full hand usually. 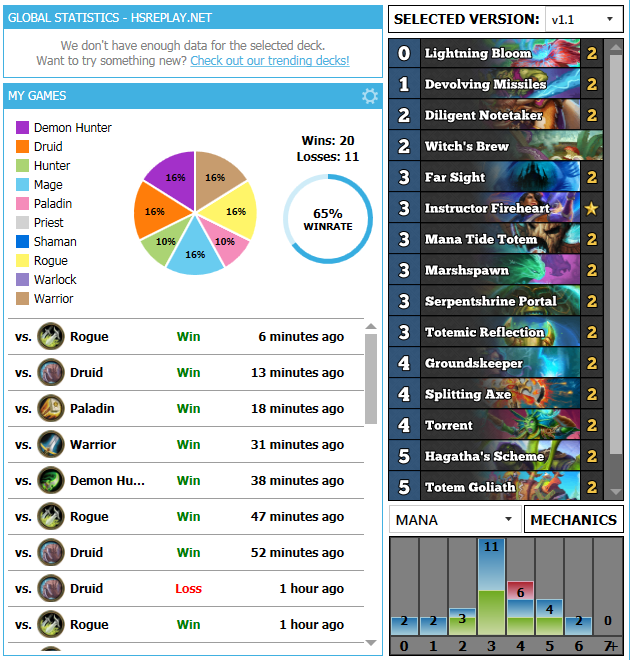