Hello, there!  It’s been a while since I touch Warrior as I was having fun with Shaman control decks in Standard. Seeing bad state in Wild mode makes me want to find out the vaccine for this Darkglare Warlock pandemic. It turns out that Odd Warrior is the perfect choice to climb in the current meta (season 78). Our “Odd Warrior menu” has the sections:

1. Reason to play this deck:
In addition to the massive removals that counter Darkglare Warlock, Odd Warrior excess armor gaining can outlast Reno Priest ammo, Secret Mage fuel and Kingsbane aggressive weapon swing. Its playstyle is also fun because you can play the deck, gaining 4 armor per turn while sipping coffee and chit-chatting with your buddies.

2. Card choice:
***Single Removal package:***
Odd Warrior relies on removing enemy minions and stalls until opponent is out of resources. Therefore, single removal package is essential in establishing the previous statement.  For example, Sword and Board can remove early threats like Battlefiend, Southsea Deckhand, Gibberling and Kabal Lackey. Bash is good for 3-health minions, Coerce is excellent against Giants, Shield Slam can smash any minions (except Elusive minions, of course) with the help of armor generated from such Shield Block, Bash and especially Hero Power.
*** AOE package:***
AOE cards take Odd Warrior to the next level. Whirlwind can deal with Pirates from Kingsbane Rogue or Token Druid, Bladestorm can be the savior after setting minion health to equal state. Reckless Flurry + HP is a 5 mana Flamestrike that wipes pesky token minions.  Meanwhile, Brawl is the core AOE from mid to late game as it usually leaves your minions on the board (not counting Edwins and Deathwings that survive Brawl on youtube highlights, ;) ). Plague of Wrath is strong when paired with Whirlwind, Ravaging Ghoul or even Reckless Flurry. In addition, Supercollider crushes board state that consists of two big minions or wide board with left-most or right-most minion that can be cleared. “Save the best for last” - the quote that should be applied on our Lord Barov. He actually carries us anywhere, anytime. Combo-ing with Whirlwind, Ghoul, Brawl, Flurry, which proves that he is the one that cannot be replaced.
***Other cards***
Brann Bronzebeard + Coldlight Oracle is the most devastating combo when it comes to milling key cards. Before burning cards, we should analyze whether it is worth the combo or not. If we suspect our opponent playing combo decks (not using Psychmelon in Aviana Druid, doing nothing in early phase as a Mage, not playing Raza on 5 or Anduin on 8,…), we better try to burn their cards by counting the number of burn-able cards of both players and avoid burning ours at all cost.  With Antique Healbot and Kobold Stickyfinger, the healing is quite useful late game as demonstrated in the following match:
https://hsreplay.net/replay/gzQnKKoSCvhqaiDYNxg82Q, while the stealing weapon can be crucial against Kingsbane or Bomb Warrior.
Many will wonder why Elysiana is in the deck. The attached replay in previous sentence is the best answer for the question.  About Baku the Mooneater, well, no Baku no party!

Assume that op is playing Odd DH, you should mulligan for Reckless Flurry, Sword and Board, Shield Slam to counter Hench-Clan Thug and Battlefiend.

Druid is infested with Jade and Tog Druid. Against these decks, you are the unfavored. Therefore, you should maximize the chance of winning by playing Brann + Coldlight to burn the key cards such as Aviana, Jade Idol,... In my meta, I face many Token Druids with Embiggen and the Pirate Package to make Patches a 5/5. Sword and Board, Reckless Flurry and Bash should be kept in mulligan.

Even Hunter and Spiteful Hunter are on the rise with Dragonbane and the Secrets package. They apply pressure pretty fast with turn 3 Phase Stalker into HP. In order to defend your face, Bash, Shield Slam and Shield Blockare the ones that should be in mulligan.

Secret Mage dominates Mage archetype and drives its winrate to the rooftop. The burst from such Fireball or Cloud Prince can end the game quickly if you don't utilise your HP and removal. Playing around Secrets by playing The Coin before playing other spells. Mulligan for Shield Block, Shield Slam and Bash for early game stalling.

Libram Paladin and Quest OTK Paladin can be a pain in our butt. We don't have tools to silence such as Psychic Scream to counter Libram buffs. That's why we rely on Bladestorm [/card]and [card]Lord Barov to clear board. Odd Paladin is less threatening as we have Flurry and Brawl to deal with Silver Hand recruits. Again, a perfect-timing Loatheb can help them gaining lethal earlier than we think. We should get Shield Block, Ravaging Ghoul and Bash in the mulligan.

Unlike stealing stuff in Standard, Wild Priest turns into an AK-47 and destroys control deck aggressively. They will try to draw Raza the Chained and Shadowreaper Anduin [/card]early so that [card]Spawn of Shadows can be the main sniper. To survive against Raza Priest slaughter, we should get as much armor as we can. Don't worry about fatigue, we have Elysiana here! Please keep Shield Block, Bash and Coldlight Oracle in mulligan as Coldlight can shine with Brann and make Priest cry in the corner after seeing Raza or Anduin burned into ashes.

Kingsbane Rogue helps Rogue reaching the top tier by early game dominance with Ship's Cannon,Bucaneer and Patches the Pirate. Don't be nervous as Kobold Stickyfinger can steal the Kingsbane and force them to press the bottom-right button into concede! Before that, paying attention to those pesky pirates and crushing them with Whirlwind and Ravaging Ghoul. Beside the two mentioned cards, you can keep Bash to destroy Ship's Cannon and Dread Corsair.

Surprisingly, I face only 1 Odd Shaman in my run from D5 to Legend. Before that, I face a few Even Shaman with Totem synergy cards like Splitting Axe. Shaman focuses on board building and once they all in and be cleared, they will likely lose the match. So as to clear Shaman early threats,Bash,Reckless Flurry and Shield Block are preferred in mulligan.

Warlock is the antagonist now. As the protagonist, we wait for them to cheat the mana by Darkglare, build the board and then we wipe it with Reckless Flurry. We can treat Cubelock the same as we treat Darkglare Warlock. We should get Reckless Flurry, Shield Slam and Brawl in our mulligan.

The mirror match is the most fun matchup. The one that can burn Elysiana first will win the matchup, or the one that can bypass before the turn limit and get opponent to die via fatigue. Against Bomb Warrior, we can gain armor and refrain from drawing cards. Instead, we Elysiana and turn the bombs into dust. Mulligan for Reckless Flurry, Bash andSword and Board (in case we face Pirate Warrior).

Instead of 2 Bladestorm, we can replace 1 with another Reckless Flurry. Kobold Stickyfinger is surely replaceable and Gluttonous Ooze is the ideal replacement. The one card that cannot be replace is Lord Barov. He carries this deck on his shoulder. Supercollider can be replaced by Zilliax to stabilize aggro.

Thanks for reading, guys. Have fun Armoring Up! ^^ 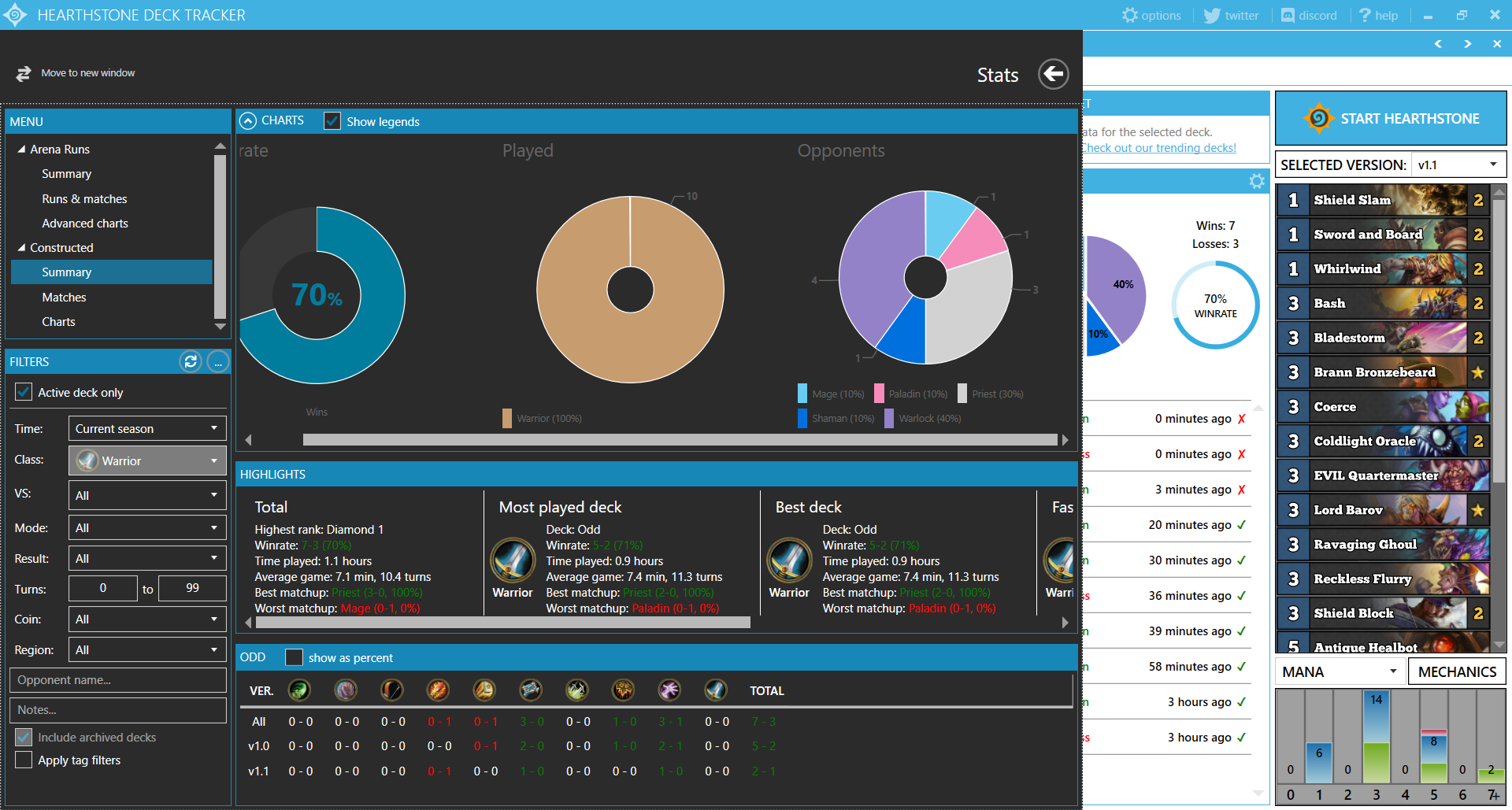