Hey you!  Unpacked Ysiel Windsinger recently?  Well get ready to re-enchant her, because she has potential BEYOND that Wild Aviana combo deck!  She is teaming up with Malygos to sing the song of INSTANT DEATH upon your opponent.  And the best part: with the current meta, no one will see it coming!  Prepare to style on your opponents with this off-meta powerhouse of a deck!

Difficult deck to play.  This is not the deck if you only care about the climb.  This deck achieves success after a LOT of practice, and punishes mistakes.  If you want a druid that will get you an easier climb to legend, grab Spell Druid.

You need to actively think ahead with this deck, knowing when to save removal options depending on the opponent, and how to reach your win condition.  With that being said, it's the difficulty that makes the deck fun, imo.

Vs. Control: It is here where the OTK thrives.  We are prioritizing drawing our combo pieces and controlling major threats.  The central combo involves using Elise the Enlightened to copy combo pieces, such as Malygos, Moonfire, and Swipe.  Focus on trading efficiently, playing reactively, and saving big removal for big threats.  Use combo spells as removal sparingly.  Always have a win condition in mind, and note that you can replicate combo pieces with Elise.

Vs. Aggro: We are using small spells to clear major threats, and prioritizing completing the quest as fast as possible. Use the completed quest to stabilize with Starfall,Oasis Surger, and Hidden Oasis.  From there, keep slowing the game until you win with minion damage or with Malygos.  If possible, discounted Ysiel Windsinger is an option to achieve a game-winning swing using Nourish.

Ysiel Windsinger: Below are the justifications for why she improves the matchup against aggro and, more consistently, control. 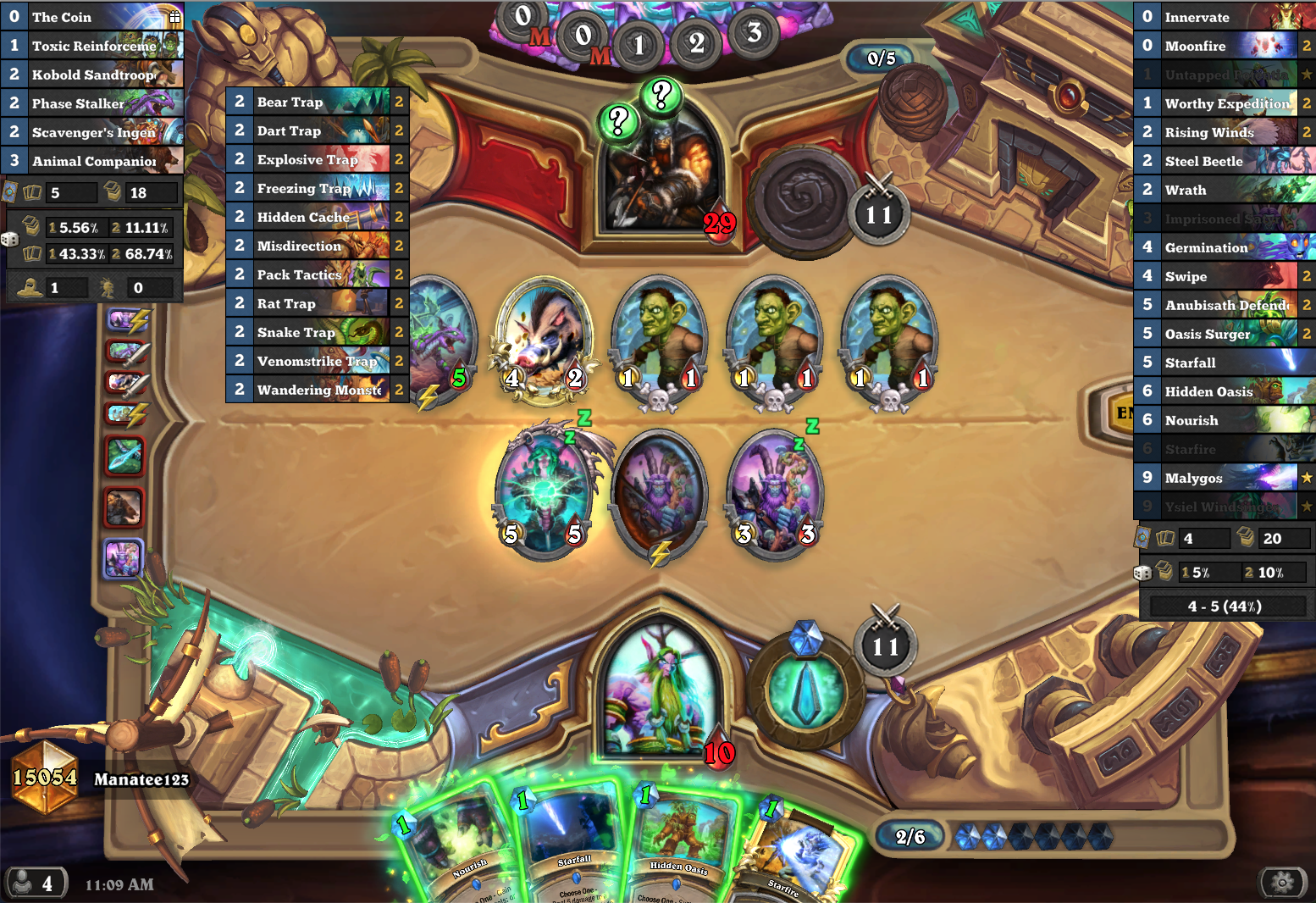 Figure 1: Discounted Ysiel Windsinger played against a Face Hunter.  Opens Nourish -> Starfall, Hidden Oasis, and an additional spell IN THE SAME TURN.  Stabilization was effective, and Druid won this game.

Going pure control is a good way to get brutalized by Evasive dragons and huge Druid swings.  I think that this deck needs to fight somewhat for the board early on, and so Steel Beetle andCrystal Merchant are solid.

Innervate- Mana cheat for the combo against control decks. Don't save against aggro, and instead use to complete quest and push big cards.

Crystal Power- Removal against early game, or execution/healing late game
• When quest is completed, this spell deals two damage to a minion, and then heals it for 5 if it did not die. If the 2 damage does not kill, it get healed for 5. So this card is good for "executing"
• Quest or not, it does not damage face, only heals.

Untapped Potential- This card should be completed ASAP, no matter who you are facing. If you have the coin, use it turn 1 for the quest. Use Innervate for the same purpose, unless you are need it for OTK. You want the hero power for a power swing by turn 5-6.

Worthy Expedition- Provides flexibility.  Priority targets depend on the matchup and the situation, but ideally aim for card draw (Rising Winds, Nourish) during slower games to reach the combo faster, or control and sustain options for games with more pressure (Hidden Oasis, Oasis Surger, Starfall)

Rising Winds- Gread card draw or cheap minion, depending on situation. Great value with quest, but be careful of hand space, as it is a Twinspell.

Wrath- Great early game removal against aggro that gets really strong with quest as a 4 damage cycle.  Note that this deals 3 damage and THEN 1 damage.  Thus, only 1 damage would be dealt to a divine shield minion.

Imprisoned Satyr- Combo piece for OTK, can discount Malygos and/or Elise. Is also a useful discount for Ysiel Windsinger to set up an early board swing.  Be careful not to discount Oasis Surger!

Germination- Combo piece for OTK. Weaker against combo, but note that the copy gains taunt, for a slight defense boost.

Swipe- Combo piece for OTK, good removal. If you are about to die and are desperate, play a bare Malygos and Swipe as a hail mary.

*NEW* Elise the Enlightened- Absolutely key card in any Druid Malygos deck.  Valuable when she replicates Moonfire, Swipe, Germination, Innervate, and even Malygos himself

Oasis Surger- This minion is the best removal in the deck when quested, and is why we *rush* to complete the quest on turn 4 with the coin. 8/8 minion? DEAD! Cant be targeted by spells or hero power? DEAD! Two medium sized minions? Two medium sized DEAD minions!
• Against control, try saving Oasis Surger in the hand, as the minion rush value is not worth losing to AOE

Starfall- Flexible board clear, especially when quested. Save for the major threats against control.

Hidden Oasis- With the quest, this is an aggro devastator. The taunt and heal are weak alone, but devastating when combined, further justifying rushing quest completion against aggro.

Nourish- Key card in speeding the win condition with ramp and card draw, especially with quest. Also acts as mana cheating for Ysiel, either for the OTK or for a board swing in a pinch.

Ysiel Windsinger:- See section 2 and 3.  To summarize, she helps speed the deck towards combo pieces, can steal games from aggro matchups if discounted and/or played with Nourish, and can even pull off an emergency combo with Malygos if Elise the Enlightened never appears. (see part 6)

Malygos- Essential for the OTK combo with +5 spell damage. OTK is not necessary against aggro decks, and simply summoning him discounted is threatening.

6. The Elise Combo: A Basic Combo.

The most consistent of this deck's OTK involve Elise the Enlightened and Malygos and two Moonfire.  For this reason, drawing often is important, as you want to remove duplicate cards in order to activate Elise.

The heart of this deck is the OTK combo.  There is tons of flexibility and combinations with the standard combo between Elise the Enlightened and Malygos, but in scenarios in which Elise does not show up, it is helpful to know that there is a COMPLICATED YET POSSIBLE way to achieve 30+ damage.

34 damage!  Kinda complicated, huh?  This combo maintains consistency because its pieces are interchangable:

As a concluding point to this combo, it is a complicated means of getting lethal.  However, if a Satyr discount lands on Ysiel, it is handy to know that this is a potential win condition.  You can even play Elise the Enlightened to set up a Ysiel-Malygos combo.  The possibilities are endless, and are impossible to cover all in one guide.  But hopefully you can use this information to find this kind of lethal in your own games.

If you want to better face off against aggro decks: Germinationcan be interchanged for Steel Beetle

This removes the ability of pulling of the Ysiel combo, but improves survivability against aggro slightly.  Depends on what you are encountering.

Thanks for all the comments as always!  I loved to hear people's reactions to this deck.  This is likely the last update on this deck for a while.  Taking a month break from the game and from the site.  Gotta reclaim my life lol.

This deck feels good with current Highlander hunter meta.  Not meta-breaking, but a capable deck that can go positive and get some satisfying wins.  I'll re-assess the meta situation when I return from my hiatus.

Have fun my fellow goose tamers :)