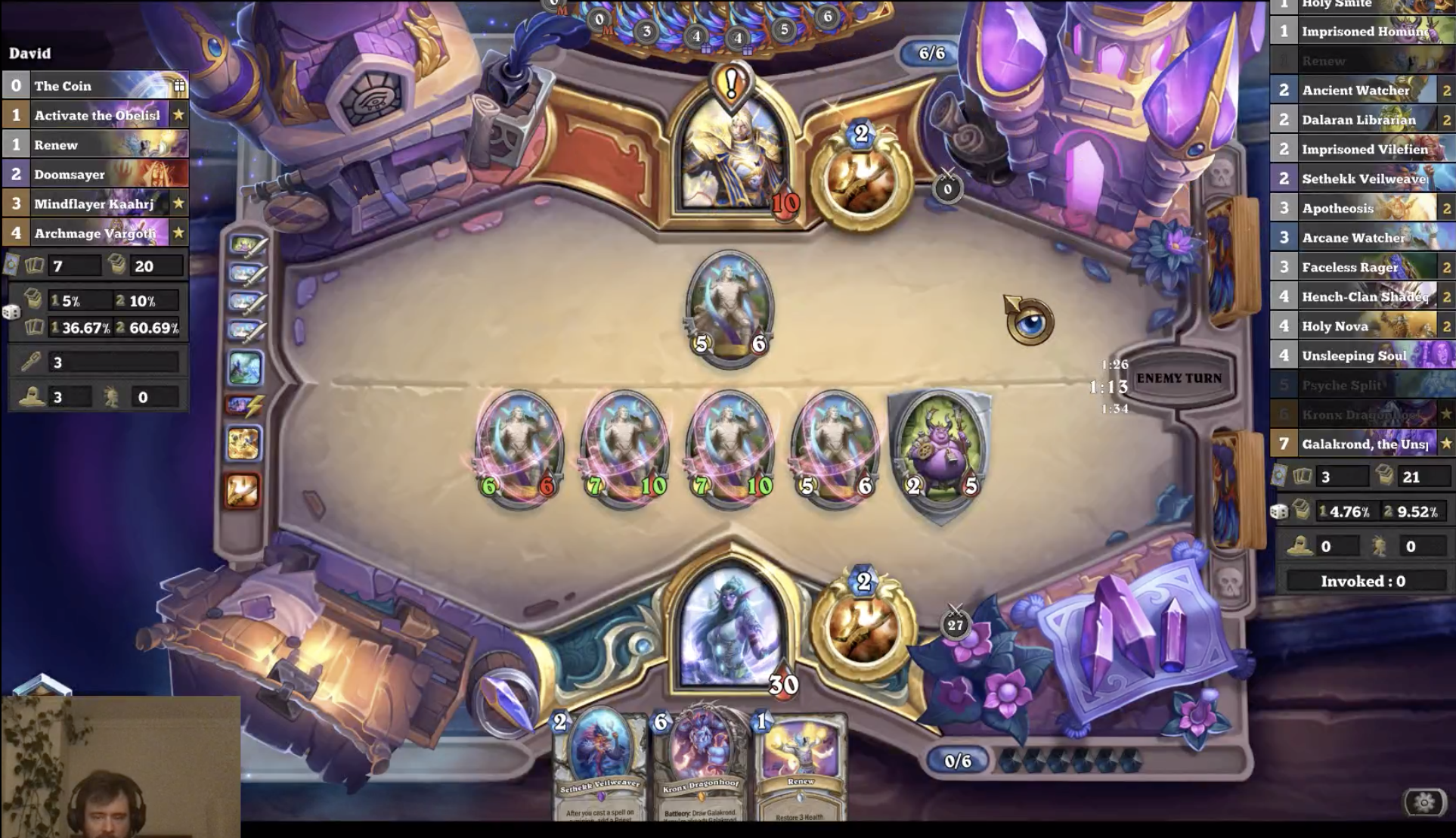 This is an aggressive (seriously be aggressive) priest that drops big statted minions early, buffs them, and duplicates them.  In particular you have the Watchers (Ancient Watcher, Arcane Watcher) that need to be silenced, and the Imprisoned Demons (Imprisoned Homunculus, Imprisoned Vilefiend) that you need to wait on.  The result is lots of stats for the mana that can quickly snowball with buffs and duplication effects (Apotheosis, Faceless Rager, Unsleeping Soul, Psyche Split).  This should hopefully lead to a kill by turn 8, before your opponent has a chance to clear your board and rebound.  If you stall out, you have Sethekk Veilweaver and Octosari to try to randomly save you, but try to not let the game last past turn 10.

I took (a slightly different version of) this deck from Rank 5 Diamond to Legend and I think you can too.  It combines my favorite things: paring cards for tempo gains (Like Silent Druid), building big minions (Like Bubble Paladin), and duplicating them (like Crusher Shaman).  It's a fast deck that can help you ladder quickly, while having a unique playstyle.  It destroys Demon Hunter and Hunter, the first and third most popular classes on ladder.  It is cheap: four epics, and one legendary (that I didn't even use in my climb).  The remaining cards are entirely Basic/Classic + Rise of Shadows + Ashes of Outland, so it's very approachable if you missed a couple sets and are a returning player, like me.  Plus it's always really enjoyable to see a bunch of buffed copies of your minion on the board.

Other than that, mulligan hard to get one of the following: Arcane Watcher, Ancient Watcher, Imprisoned Homunculus, Imprisoned Vilefiend, or on coin, Henchclan Shadequill.  Assuming there's one other card you'd keep for the matchup and otherwise a hard mulligan, you have a ~95.7% of finding a watcher or imprisoned demon by turn 3 without The Coin or turn 2 with it.  The remaining 4.3% of games will be pretty rough, but should be rare.

If you have one of the watchers or imprisoned demons, mulligan hard for a combo piece, i.e. Faceless Rager, silences for the watchers.

Beyond that, mulligan to fill out a nice curve through turn 5 or keep a Holy Smite against a suspected aggressive opponent.

Links to example gameplay for each matchup provided.

Demon Hunter (19/26 - 73.1%): I'm mostly seeing the aggro variant (79% win rate) on ladder now, which I have been farming on my climb.  Holy Smite, Holy Nova and your cheap minions let you go toe to toe in the early game.  Demon Hunters lack hard removal so feel free to buff up a huge minion that can punish him in the mid-game.

Hunter (11/14 78.6%): This deck destroys Face Hunter and Dragon Hunter, and does decently well against Highlander.  Hard removal like Primordial Explorer and Rotnest Drake are your main concern.  Keep a Holy Smite for the former, and try to go wide when possible to protect against the latter.

Warrior (6/10 - 60%): Mostly seeing the enrage archetype, which is a pretty evenly matched game. Silence is pretty effective on their minions.  One of the few matches you can win in the turn 10+ range without Octosari.

Mage (5/11 - 45.5%): Your silences are doubly effective, since they can release frozen minions.  Dalaran Librarian is a star.  They do have lots of strong AoE, so this is one of the few matchups where you might want to hold back a minion.  Their abundance of removal and RNG fiesta keep this matchup close.

Rogue (7/15 - 46.7%):  They have high tempo cards, but you can go toe to toe in the early game.  Favor imprisoned demons over watchers slightly, so that all your minions come online at once.  Often comes down to whether they can find their Blackjack Stunners and Flik Skyshiv (he's a real buzzkill).  Rogue has big swing turns in the late game that mean you can't afford to let the match go long.

Warlock (1/6 - 16.7%): Only really seeing the Magic Carpet archetype right now.  I feel like this shouldn't really be that disfavored, but they always seem to generate too much tempo early with all the buffs, and everything is just a bit out of Holy Nova range.

Played 5 games total against Priest, Druid, Paladin, and Shaman combined.  Priest is probably unfavorable, since they have so much removal, but I feel like the rest should all be favored because they either start slow or can be shut down early by keeping tempo, but I'd need more experience to really know.

You will certainly run out of cards in hand some games, but if you want to run a slightly slower variant that still gives you a chance (all praise RNGsus) in the late game, then swap Galakrond, the Unspeakable and Kronx Dragonhoof in for two cards (I recommend Mortuary Machine and a Imprisoned Vilefiend).  I tried the Galakrond version out a lot earlier in the season, and it was working pretty well, but I think I prefer the more consistent early game this version gives you.  Galakrond, without the support cards often isn't quite enough to save you, even if he can generate infinite random cards.

Boompistol Bully:  Good way to solidify a board against battlecry minions like Flik Skyshiv

Apotheosis: Had this card in for a long time, but it didn't perform well statistically.  Dominant in matchups like Hunter and Demon Hunter, but these are already favorable, and you can find the heal you need off of Renew

Shadow Word: Death:  Good tempo and pairs well with Sethhek Veilweaver, but is too situational for a proactive deck like this.

Soldier of Fortune:  Fits the theme well, but that's too many 4-mana cards for such an aggressive deck.  It's nice the downside comes on the next turn, so you can wait to silence, but the downside is a bit too high compared to Hench-Clan Shadequill.  I'd also rather have the extra health than the extra attack.

Conjured Mirage:  An interesting silence target with solid stats.  Occasionally useful to set up a wall before a kill turn or some AoE, but ultimately not threatening enough, and too often not useful without the silence.

Thanks to Lyrinian for some great brainstorming in the early stages of brewing this deck, in particular Imprisoned Vilefiend, and the Galakrond variant.

Thanks to Mrdiddles, whomever you are, for showing me the power of watcher + silence in priest on ladder, inspiring me to brew this deck.  Regret not friending you.