My version of Reno Highlander Mage include Luna's Pocket Galaxy cause i want to play it, so also card like Tortollan Pilgrim and Dragoncaster.

IMPORTANT: This is a base list, but it will change based on meta, below I will write the cards that I consider good, you can modify it based on your choise.

Core Cards (11): Auto include cards. Here the base of the deck.

Luna's Pocket Galaxy: I like a deck based on this card, so i need more good big minion and less spell. We want to cast this card as soon as possible. Don't keep it against aggro deck.

The Amazing Reno: His hero power is not important, but his battlecry is too important to reset board and gain 5 armor. And i want all Renos in this deck, so i include it :P But it save our ass a lot of times.

Kazakus: Always keep in hand; create a 1-cost or 5-cost spell against aggro, 10-cost spell with polymorph against big priest and control lock and 10-cost with resurrect against control warrior.

Dragonqueen Alexstrasza need no explanation, auto include in any Highlander Deck.

Tortollan Pilgrim; We use it mainly to play Galaxy, but is a good combo also with other big spells played in this deck like Blizzard, Puzzle Box of Yogg-Saron, Power of Creation or Ice Block sometimes.

Dragoncaster: We can cast big spell like Luna's Pocket Galaxy, Puzzle Box of Yogg-Saron, Blizzard, Power of Creation for free in turn 6, or a 10-cost Kazakus potion. But we need some dragon in our deck.

Malygos, Aspect of Magic: I like this dragon that give a very good spell, and his cost is not much high. but we need to include some other dragon in this deck.

Kalecgos: We need some good big dragons, this is one of the best.

Important Cards (12): Not the base of the deck but is better if you have.

Stargazer Luna and Book of Specters: Very powerful if you play them after Galaxy so you can draw a lot of 1-cost card in a turn. But you can replace one of it with an Arcane Intellect.

Alexstrasza and Azure Explorer: I think it is important to have at least 5 dragons in deck for the dragon sinergy. I choose this other two, but you can use two dragons you like.

Arcane Breath: We have a dragon sinergy, so this card is powerful, 2 damage and 1 spell. Always keep against aggro.

Power of Creation and Puzzle Box of Yogg-Saron: We need more minion and less spell, and we play Tortollan and Dragoncaster so we can include some big spell except Galaxy. I think these 2 are powerful and useful. Puzzle Box can save a lot of game in critical situation.

Siamat: Good to remove minion or put pression on the board. Or a big taunt when you need protection.

Ice Block: It can save a lot of games, always good. Give to us an extra turn that we need to survive and recover health and board.

Zola the Gorgon: I craft it and i'm happy cause is a good tool, you can copy you Reno and is gg vs aggro, or other good card. Zola give you a lot of value vs control deck.

Other cards (7): You can choose 7 cards that you prefer and based on meta. Here some  suggestion you can choose between these, sometimes i will update the list on the right, but there is not a single list, i change it based on meta.

Here all the card that i prefer, and i think are good, i will update this list if i found some new good card to use:

Astromancer Solarian: In Standard work better, but i think is a good choise, cause is a early drop and the prime is a good card for late. Mainly i play it cause i like the effect but is not a must.

Firetree Witchdoctor: I like it cause you can discover a spell according to the situation. Sometimes a Polymorph against Warlock or a removal against aggro. Before i used Primordial Glyph, but i prefer this now cause is a 2/2 body good in early.

Flame Ward and Ice Barrier: Too aggro's deck in the last part of the climb, but with these two secrets you gain a little bit of time that you need especially against DH. You can replace them if that are not many aggro's deck.

Mad Scientist and Ancient Mysteries: With 3 secrets these are a must, cause "remove" 2 card from our deck and with 2 mana you can play it free. If you play only with 2 secrets, play only Scientist.

Frost Nova and Doomsayer: Good to take time and destroy board.

Khartut Defender: Nice taunt + heal against aggro. I try it and its no bad.

Tell me the cards you like to use, have a good game and good RNG! :)

Update 1: I insert Zola, is too useful.

-1 Mad Scientist  +1 Ancient Mysteries: i think the second one is better.

-1 Stargazer Luna +1 Tar Creeper: I think Luna is too slow against aggro, better a defensive card for this meta 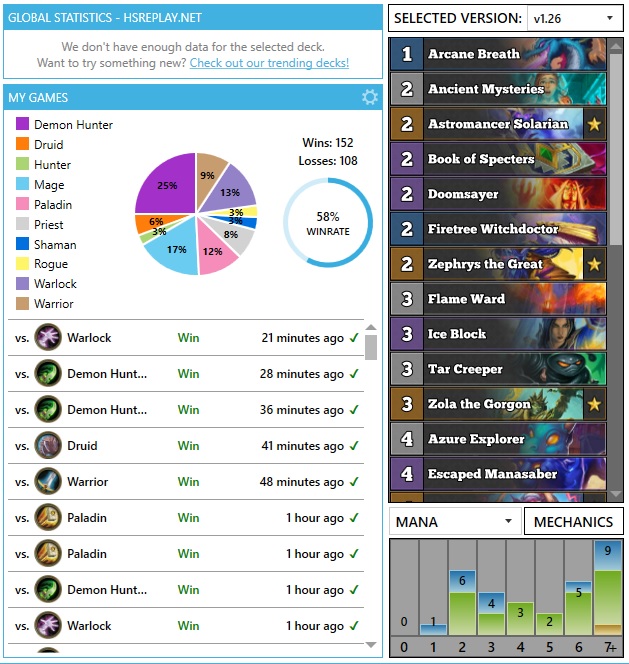