Yes, you can put Stargazer Luna instead of Arcane Intellect. 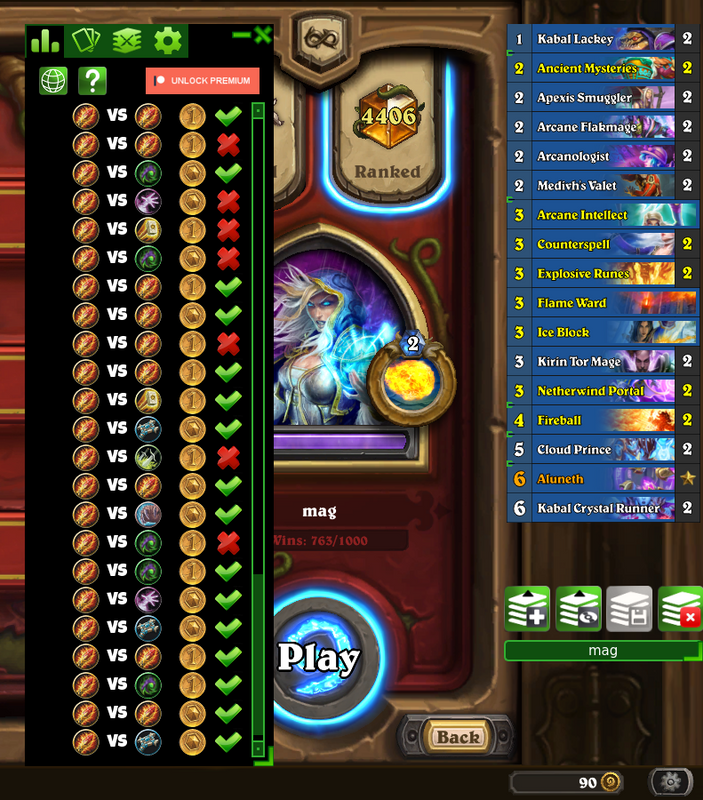 Somewhat simple deck that you can learn by playing and noticing where it went wrong. By adjusting your moves to every matchup you can win almost any game.

Overall you want to agressively push the opponent until he can't handle your oppression no more or tactically destroying his options to aggro you or take over.

When I say that you are agressively pushing, it doesn't mean just to slam whatever you can every turn as I often see some people do. Sometimes that's also an option, but it all depends on the matchup. I'll write for specific ones later down in this guide.

This will be some basics, but that doesn't mean it works for every matchup.

Fireball is mostly used to finish the opponent or get rid of big stuff blocking your minions from making damage and should in most cases be thrown away as it can not help in early game.(I'll mention cases where you can keep it)

Aluneth is a card that keeps your resources full, sometimes letting you go for nobrain aggressive push. Altough it is mostly bringing you wins, it can also be a death of you. You mostly want to keep it in hand and play it as soon as possible, unless you are losing on the board. That mentioned, you might want to push first few turns keeping board for yourself with everything you can so you can slam it on turn 6 with no major drawback.    .....  When I said it can be a death of you, I was reffering to it drawing like crazy. Don't forget you are running out of cards and you might eventually start getting fatigue damage.

Secrets should mostly be thrown away unless you are without coin and have Kirin Tor Mage in hand, then you should almost always keep it as it is one of the best turn 3 plays.  Kabal Lackey + Netherwind Portal is great but also keep in mind that's 2 cards out of hand on turn 1. You can also keep secret(not Ice Block nor Counterspell) if you have Kabal Crystal Runner in hand. Turn 3 secret into turn 4 Kabal Crytsal Runner is decent.

Common mistake some people do is overextending. If you have 3 minions on board and your opponent has none, don't throw some more unless you are sure that he has no answer.

Another one is pushing without trading, dealing all damage to the face, running out of cards and expecting to draw additional burn. Altough it's a fine play if you are about to die in a turn or 2 and you have no other outs, you shouldn't do it, keeping your minions alive can make more damage then 2 Fireballs.

In close games your opponent my prock your Ice Block. Without secrets Cloud Prince won't do damage(so either keep one, or use him before the prock), but Fireball will.

MOST OF THE TIME YOU DON'T WANT TO PLAY COUNTERSPELL IF YOUR OPPONENT HAS COIN IN HIS HAND.

I'll write about the matchups I mostly faced on the climb.

Most of them are Odd Demon Hunters and this matchup got easier with the nerfs. Nerfed Battlefiend gives you option to coin out the 2/3 body 2 drops and Bad Luck Albatross got out of the deck so did those little chickens from yours.

Objective is to clear his early aggresion and take the board. You are going to do that by pinging his 1 health minions or by throwing your own minions on the board.

On coin: If he played Southsea Deckhand turn 1 and got his Patches the Pirate out, coining to ping the Southsea is a good play if you have the play for the next turn. Also,coining out Ancient Mysteries and keeping a secret in hand so you can enable Arcane Flakmage or Medivh's Valet.

Keeping Kabal Lackey is fine in this matchup because of Mana Burn. If you are keeping secret it should be either Flame Ward or Netherwind Portal. Netherwind Portal is great as it gives you board presence or gives you another minion after he clears one with the spell.

Expect Priestess of Fury on turn 7. If there are few cards sitting in his hand it's her, Loatheb or Baku the Mooneater. In case you find Mirror Entity, you want to play it right before turn 7. Don't screw up the order if you are playing it with Explosive Runes. First copy, then damage. If he has more mana maybe first damage then copy, so you clear small minion and copy big one.

"Even a single point of damage can mean the difference between victory and defeat." - Lorewalker Cho

Netherwind Portal shines in this matchup, but Counterspell and Explosive Runes are not far behind.

Try to make the most damage you can.

Mostly dependent on draw and your ability to level the opression and control. MODERATION is the key here, but so is Aluneth.

Try to make his secrets worth less than yours(trade Counterspell for Counterspell). KEEP THE COIN unless you're pushing(with Aluneth in hand) with 2 drop into 2 drop(not the greatest strategy but not the worst). Don't prock his secrets just for the sake of it, prock it when you want to go around it. Giving him option to just play another copy is not what you want, unless it is(?). Mandatory suggestion - get him to lowest health possible before procking Ice Block, unless you have enough damage next turn.

Also, don't forget to keep track of both your and opponent's deck size when Aluneths are out. You both have to prock the Ice Block first to kill, but both of you can die from fatigue. Altough drawing secrets with Ancient Mysteries and Arcanologist is even additionally thining your deck, it can help you draw needed minions or spells. Again, it's all about your draws and your ability to balance the things.

Don't use Counterspell in the early game, you should bait cheap spells/fake the Counterspells using other secrets.

So, in early game you are pushing with 3 or 4 minions. Don't overextend yet. Gather some minions that can replace the board in case of clear. Once you protect your minions with Counterspell, you can add additional minion or 2, but don't run out of minions in your hand. You must make as much damage as possible with your minions!

He can't both Reno and clear. Also, clear Reno so there's no copying or similar stuff. Keep burn(Fireballs, whatever you find using Apexis Smuggler, etc.)in hand until it's used to kill. YOU CAN USE THE FIRBALL TO KILL SOMETHING IF IT WILL LET YOUR MINIONS DO THE DAMAGE OR KEEP THEM ALIVE!

You should  think before using Aluneth in this matchup, because if Priest gets in control, you are dead from fatigue in no time. You want a decent board and something in hand. Aluneth should be used as additional push or backup win. Meaning, if Priest manages to clear you two waves(board and replacements minons) and any additional burn you have, Aluneth draws what he cannot stop anymore.

So, in short: Keep board presence without overextending. Create resources in your hand, so you can go on few big swingy plays in a row. Use Counterspell to disrupt Priest's clears and preserve your board. Go greedy on atleast one Apexis Smuggler, and get additional burn or board strenght.

Noticed you also swapped out duplicates for netherwind portals. How was it?

Found it much better. Everyone is playing around Duplicate, so I was sometimes even in better position because they would first clear Kabal Lackey and not the big minion. You can play it with Kabal Lackye turn 1 and it's much better for tempo then Duplicate. Also, it's very nice to get something oon the board after a board clear spell.

So my question is, is it worth it to cut the mad scientists? I understand the value behind apexis but free secrets from the deck.. not quite sure

ASK IF THERE ARE ANY QUESTION.