Last season I finally got the golden rogue hero, but this season, instead of switching to mage (my last non-golden hero) I decided to refine and play the rogue deck I was playing. Started from around rank 5 and reached rank Legend #176 with a very nice 62% win rate, which is really good considering it has not been inflated by games played at much lower ranks!

But let's get to the deck list! The new set brought two pretty good cards to Burgle rogue:

Clever Disguise: much better that the old Burgle, even if it gives spells only. You may happen to cast it turn 2 to activate Vendetta and Underbelly Fence, but usually you keep it to refill later. This card is especially great against other rogues, a matchup where Burgle Rogue always suffered

Bazaar Mugger: at first I was dismissing this card as overcosted, and surely its cost is not amazing, but a charge minion in a deck with Tinker's Sharpsword Oil can do crazy stuff. You often trade with a medium-sized enemy minion, keep a damaged minion and get a random creature that, as Clever Disguise, work well in the rogue match too. Don't forget that costing 5 you can even play 2 when you have the DK hero power. This minion gives you tempo and value, and that's nothing to dismiss quickly!

With the above new cards, and some new tweaks to the deck from the previous season's experience, I was able to reach Legend with a wonderful 62% win rate (screenshot below): 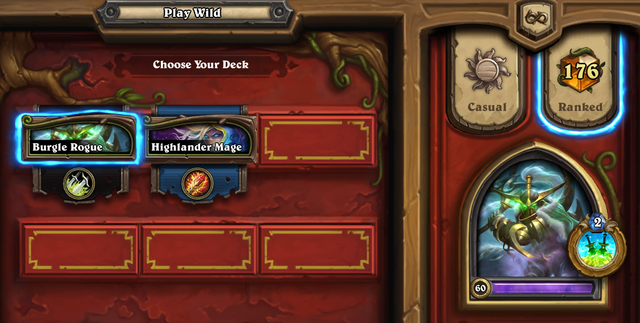 My win rate were above 60% against all classes, except for two matchup I had found myself weak against: aggro paladin (especially the new murloc variant) and Highlander Mage (damn Zephyr always giving them a weapon destroyer.. and often they even copy Zephyr to get two!). Priest was another matchup which really depends on how much he highrolls a Barnes, that's why you must mulligan for Sap; you also must quickly get aggressive and seize the win in the midgame, otherwise you can't beat a mass resurrection.

In all matchups I mulliganed hard for either Spectral Cutlass or Cavern Shinyfinder, however in aggro matchups I sometimes kept a good antiaggro hand (with a combination of cards like Swashburglar, Underbelly Fence, Blink Fox, Vendetta, hoping to draw the Cutlass later. Cards like Hallucination or Clever Disguise are always mulliganed away, unless you have Underbelly and Vendetta, and don't have another quick activator.

I'll then go in a card-by-card analysis:

- Deadly Poison: obvious choice. There are very rare cases against aggro where you may want to cast this on your dagger quickly, to avoid losing board, but it's almost always better to keep it for the Cutlass

- Hallucination: even if against rogue you get a rogue card, being able to choose a specific option is incredibly strong! It gives you Vendetta on turn 1 and Underbelly on turn 2. I would drop Swashburglar before this!

- Swashburglar: compared to Hallucination you lose the discover, but gain a 1/1 body. Overall I prefer Hallucination, but another option to activate burgle effects turn 1 can't be skipped: both cards have their place in the deck

- Cavern Shinyfinder: I used to play a Raiding Party build before this, and was really strong, but after the nerf to both the spell and Preparation, it's just too slow. Cavern Shinyfinder works well, and a 3/1 is not even so bad, especially when you want to put some early pressure against control decks (against aggro it's instead easily traded, but still does his job)

- Sap: so much needed against Priest, and big taunts like Voidlord, but often useful just to gain tempo against midrange. A signature spell for rogues.

- Underbelly Fence: this girl is Miss Undercosted. This card value is just crazy, you get a 3/4 rush for 2 mana! Also great and easily comboed with Tinker's Oil for a 6/4 rusher! Don't dismiss the possibility to also cast her as a 3/4 on an empty board, even if you don't make use of rush: a simple 3/4 for 2 is still incredibly good

- Undercity Huckster: this is probably the weakest card, and the one I have tried swapping out for something else the most. It's nothing flashy, but it's great to have some early board, and gives you a card (most of the times, and not as you cast him, but it does). I don't think it's core at all, but I feel like it's still the best choice

- Blink Fox: a much better Huckster, lost count of the Blink Fox -> Vendetta plays I had made, and that's an incredible tempo play all the times.

- Hench-Clan Burglar: the last card giving good burgled cards even against rogue. Discovering them is even better, but the stats make it a bit weak especially against aggro/midrange. Still a card you don't want to do without!

- Spectral Cutlass: it's just the core of the deck! There are times when you may happen to win without, especially if you manage to seize the board against aggro and then win by the sheer value of your cards. Or against control if both Tess and Valeera let you win by value, but overall you win or lose by this, and that's why I feel like you should always mulligan for it or the Shinyfinder. Be particularly careful against control decks which could run weapon destruction, especially Highlander decks, as Zephyr wil almost always let them choose one. In those cases you need to save some weapon buff for the second Cutlass. Keep also in mind that Zephyr players can also duplicate Zephyr and get two weapon destruction tools, that's why you need to press them so that they play him when they can't get two activations. Regarding general use of the weapon, be wary about attacking if that leaves you at just 1 charge, because that means that the next turn you would be forced to play a burgled card, or avoid attacking, and that means that sometimes you could prefer not to attack, especially if it's just for going face.

- Tinker's Sharpsword Oil: an incredible card, give you huge bursts and making your weapon a beast. Under Valeera a double cast makes you almost invincible.

- Tess Greymane: be particularly careful about the burgled cards you cast: mass removals could backfire with Tess, and Psychic Scream in particular is a no-no, because after putting Tess in their deck, it will make her cast all remaining cards for your opponent! Spot removals are still random and can backfire, but usually the minions alone are reason enough for playing her, as a late cast can easily fill your entire board with minions, and that's a great late game play

- Valeera the Hollow: the value you get from her is insane, and will make you win a huge amount of games against control players. The stealth can even sometimes save you and give you an additional turn for swinging with your weapon (just remember to swing and only THEN playing Valeera). Valeera however is also a huge tempo loss, unless you have Vendetta as well, in that case you can cast 2 Vendetta the same turn you play the DK, and that's just great; otherwise you can afford her only if you are head on board and don't need to press for the win

Cards that didn't make the cut:

- Patches the Pirate: in theory it's great if you get Swashburglar early, but that's the only pirate together with Hench-Clan Burglar, and that mens that the odds of drawing him later on instead are pretty big. You can still swap it in for an Huckster, if you really believe in your Swashburglars

- Backstab: the early game is pretty reasonable, we don't have many combo cards, and Vendetta fills the role much better

- Shadowstep: we have many battlecries, and this on Tess is indeed awesome, but Shadowstep is often underwhelming, and a terrible top deck

- Eviscerate: we are no aggro deck needing a finisher to the face, and against minions Vendetta is much better

- Fan of Knives: was a card I used to play especially when odd Paladin was rampant, but in all other matchup is a bit underwhelming, especially without Prep

- Shaku, the Collector: nice, especially given that Stealth makes it easy to receive a Tinker's Oil effect, but the card is still pretty slow, and you need tempo early game. You could swap it in for an Huckster, if you really want to

- Sonya Shadowdancer: this could give incredible plays, like x6 2/2 Underbelly Fences, or up to 3 additional 1/1 Muggers, or a lot of other intersting stuff that can even power up your cutlass durability. However, most of the times you can hardly duplicate more than 1 minion, and in the early game it's a very bad drop. As for Shaku, you can swap it in for an Huckster, but only if you face mostly control rather than aggro

- Academic Espionage: just NO. This card needs a dedicated deck with a strong draw engine, or it's just a meme choice.

- Raiding Party: the nerf to this and Prep just killed the pirate variant of this deck, trust me

- Ethereal Peddler: seems nice, but you rarely hold more that 1 or 2 burgled cards, and the Peddler is just too slow as a card itself

- Shadowcaster: it's nice, and you could even play some infinite meme combo with this, Valeera and Bran, but it's a bit slow as a card, and a terrible topdeck on an empty board. Used to play this in the Jade variant of this deck, which was Stealth-killed by Blizzard when they made Triclass cards like Aya stop working with the Cutlass

- Captain Greenskin (and any other weapon-improving minion): at first I though it was a core choice, however I noticed that apart from the +1 attack, it's the same as casting a 5/4 for 5 mana burgled minion, and that's not so great after all. I decided to swap it out when the Bazaar Muggers made their way in, and I'm not missing him at all. Of course, any other similar minion like Naga Corsair is strictly inferior, and has no place in the deck

- Vanish: this is the card I'm still thinking about. On one hand it seems really good in certain scenarios, like against Resurrect Priest, Murloc Paladin, Control Warlock, and any other control deck using N'Zoth or other ways to fill the board in one turn. Still, the card is not even always needed in those matchups, and it's pretty bad in all others: it usually just lets you get a safe turn and swing face for some life, but you can't develop your own board much in that turn. It's great after a Valeera turn, taking back the lost tempo, and removes taunts for the final swing, but it also a pretty dead card in the early game.. overall you could probably play one or even two if you play often against the above decks, but I wouldn't consider it core, as it's a terrible tempo play, and the value you may get from boucing back card-generating minions doesn't pay back for it

And that's everything I can think about right now.. feel free to ask me anything, I'm always glad to discuss about deck choices :)