Welcome to my first ever officially Hearthstone Deck-Tracked Hunter Guide!
My name is DragonKing, (almost completely) free-to-play Dutch HearthStone player ever since the release of Naxx -God, how time flies.

More about me (and my passion for the game):

I'm Luuk, 20 year-old Dutch student, and long story short: I've always loved to play videogames. And to be a little bit more specific: especially competitive games have always attracted me, because of my own competetive spirit (pun intended). I've put about 800 hours in Riot Games' League of Legends, peaking at Diamond IV in Season 5, but apparently around double the amount of hours put in Hearthstone. By which you can assess the game as my all-time-favourite. Highlights in my not (yet) professional career have taken place around Goblins vs. Gnomes, rushing to Legend with Midrange Hunter, The Grand Tournament, taking Midrange Combo Druid to the next level, and Mean Streets of Gadgetzan, abusing the sheer power of Dragon Priest.

Anyways, enough about me, let's set our sights upon the game. Hunter. The so-called SMOrc-class. Been a very discutable class when the Face-is-the-Place was a big issue in the game. I've never really been a huge fan of it to be honest. I'd always prefer to build more Control-oriented decks, and have always craved for a competitive Control Hunter list. That's why I really loved the Dragonz'Rilla list lHlakai posted a couple years ago (also see http://www.hearthpwn.com/decks/400374-dragonzrilla for the amazing guide).
When Reno came around, I was exclusively trying to build a decent Reno Control Hunter decklist. Another reason why I love the new Highlander cards from Saviors of Uldum. I will definitely be posting my take on Highlander Hunter sometime in the near future too, but I'm currently trying out my own version of the new Secret Hunter list. Time to get to the point right now.

Secret Hunter. Always been around. From Mad Scientist to Cloaked Huntress. And from Lesser Emerald Spellstone now to Project 9. Quite different builds over time, even though the core has always remained the same: Secretkeeper, Eaglehorn Bow, some strong Midrange cards like Animal Companion and Unleash the Hounds, and -obviously- some of the strongest Hunter Secrets that are available in the game.

Now, for the non-Secret Secret cards, we've got ourselves quite a dense package, consisting of very powerful cards from very different expansions. I won't be diving too deeply into them all individually, since I'm probably already way past the 1000 words mark, but I'll just give a short description / justification of the card inclusions:

Now, for the 'Spells' part, I've actually decided to keep the mid-/late-game Spell package, just because of the sheer power-level of Zul'jin. I'll look into each card seperately, but will (try to) keep it short too:

Okay so, I guess that covers the whole decklist. Now for the Mulligan Guide, specific Matchups and Card Replacements, I must say very honestly that I'm not really prepared to give the exact perfect Mulligan / Matchup strategies yet. But will definitely add them, once I've got more data / attention for the decklist is sufficient enough. I'll give a general Mulligan advice though:

So, that's about it. At least for now. I'm very, very curious to see what you guys think of the list, as well as from my guide. Have put quite some time and effort in it, so a like / comment would be lovely! Thanks a lot for reading, and apologies for any inappropriate puns (I kindof hear that a lot, so I guess I'll apologize in advance this time, hope you guys can handle all the cringe). Any questions? Just post 'em here, I'll make sure to answer them ASAP!

Have a good one, and, as they say: Let the Hunt begin!

P.S.: I added proof of my Rank (currently being 5, but still climbing), although none can actually deduct from that screenshot that I made that Rank with this particular deck. But I guess that's a common use here. Also, added a screenshot of my Hearthstone Deck Tracker, which can be considered a little more reliable. And yes, it's real. 70% Winrate over 46 games. Quite amazing, isn't it? ^^/ 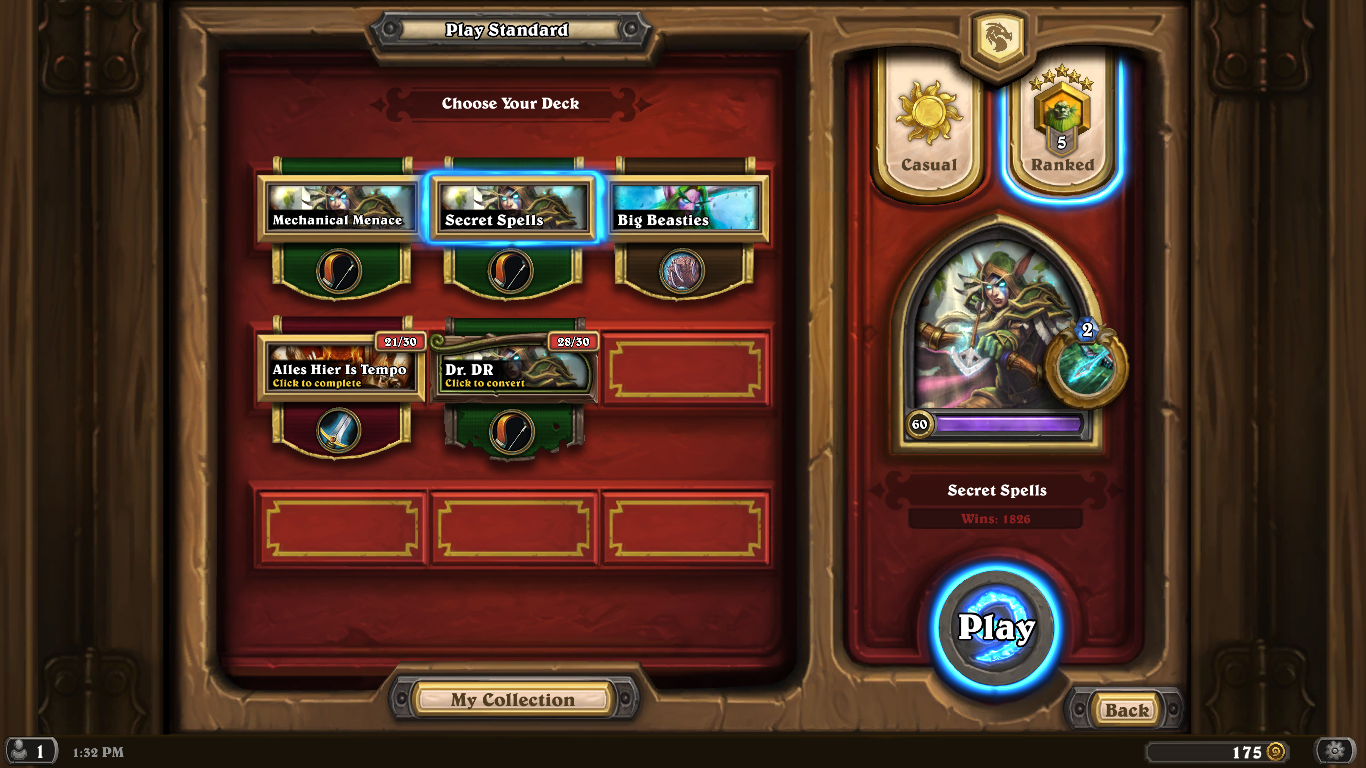