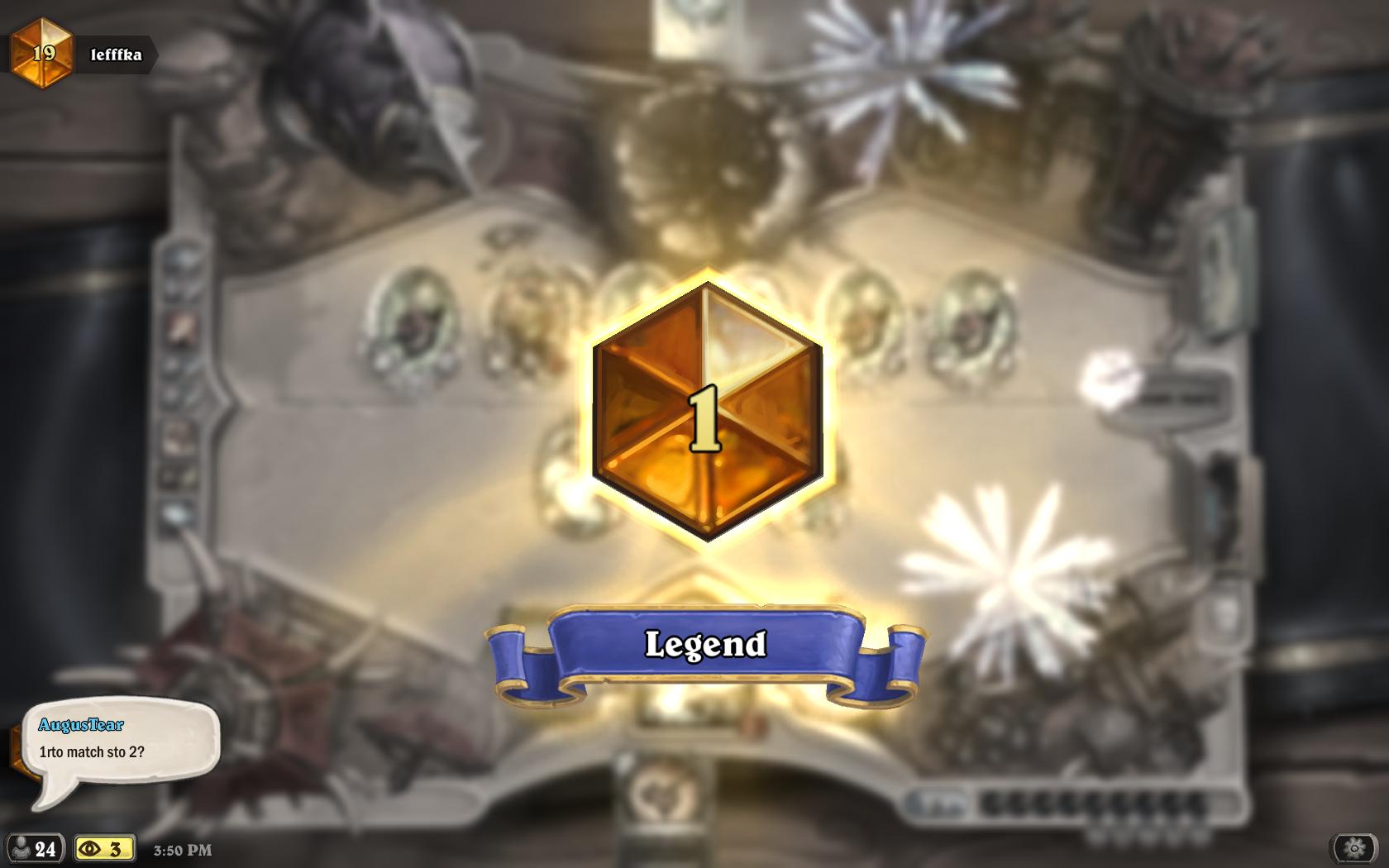 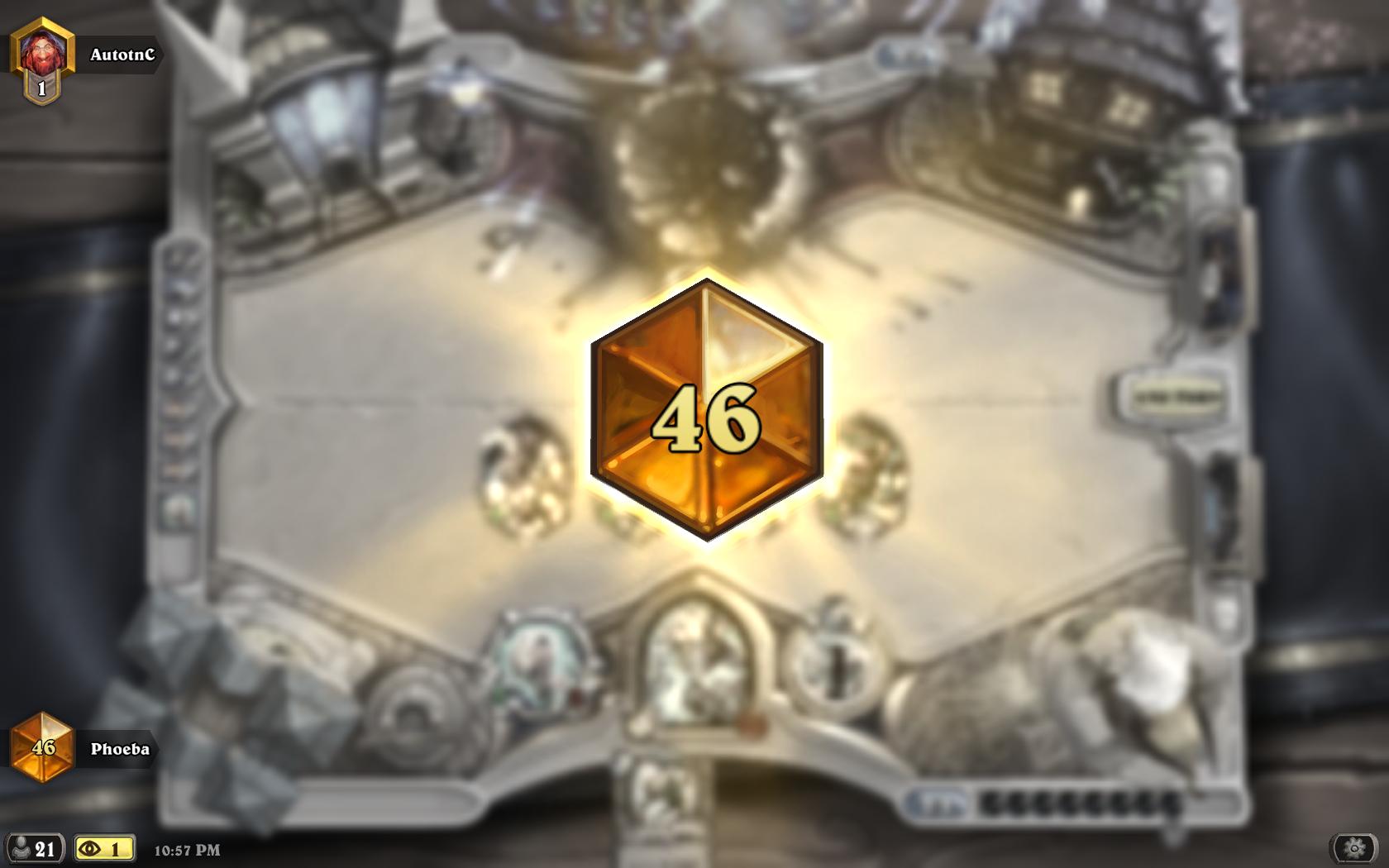 Got Legend from rank 25 on NA server in one day. Still the best deck for ladder. Here are my stats : 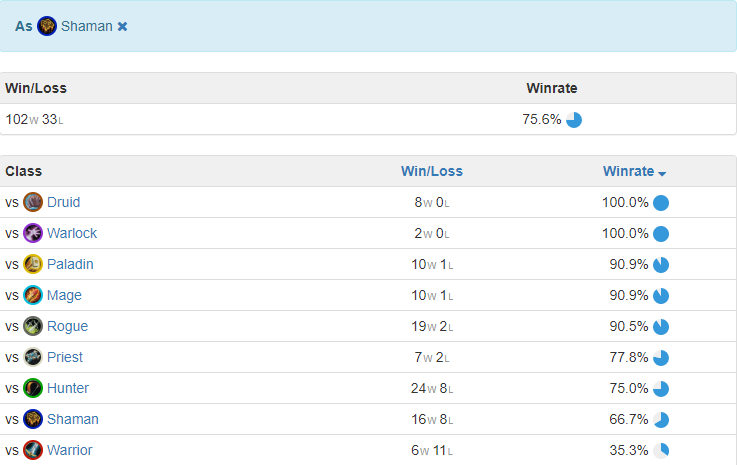 Got Legend from rank 25 on Asia server too. This time i tried some diferent versions so the winrate isn't so high. In coclusion Zentimo is very very bad so don't play him. In about 130 games i played with him it actually won me only 2 games and lost much much more. Second Earth Shock and second Feral Spirit are pretty close but Feral Spirit is a bit better because is decent Vs hunters and paladins but much better Vs all other classes. If you face too many paladins hunters though you can consider playing 2 Earth Shock. Here are my stats :

A lot of people seems to get difficult with this deck and want to see how i play so here is some of my games. The best way to do this , so you can practise , is to pause the video think what you are going to do in this situation and see what i did. Have in mind that all the games are top 100 and higher so i play against people that are pretty good at this game.

(That's a pretty well played game. At turn 7 i set him lethal but i know his hand is full and he might have Vicious Scalehide into Dire Frenzy so i don't play anything on board to secure it will not heal this turn so i can kill him the next one)

(Here is a good example of why overthading costs you games. If at turn 7 or earlier had missed even 1 damage for a trade i wouldn't have win this game)

(Here is a perfect example of when you should trade. By doing that i secure my minions from Dyn-o-matic and push next turn more damage)

(Even tough this is Pogo rogue this is exacly how you should play the rogue matchup. I dint play the Sludge Slurper at turn 1 because i saw 3 turns ahead , taking value with Unbound Elemental and Likkim to remove rogue 3 health minions)

(Here i misscount and tough that if i did Zap! and got from Spirit of the Frog the Lightning Bolt i would have lethal but it was 1 off. It's a slighty missplay but you kinda understand how you can find lethal's if Spirit of the Frog is on board , so have that in mind and count correct :P)

(Again here you have to go for the 1/4 spell power tottem or you never win. If i started givining my damage with such a bad hand it was just a loss)

(Even tough this ended up in a defeat because of a created by card , unfortunately , i think it's the best example of how to play the mirror form behind and what you need for the mirror)

(Another pretty unlucky defeat. Even if i played it perfectly and had set him for lethal lost to a top deck into Mutate into the best taunt minion it could possible bring him at 6 mana)

Unfortunately i dont have the warlock vods because i was playing on phone. It was only one matchup though at top 100. The zoo matchup is similar to token druid just to have an idea how it goes.

I hope this will help you understand better the deck and the mulligan i do and why Underbelly Angler is one of the best cards in this deck.

Control warrior is the worst matchup , so if you face a lot of control warriors try to avoid playing this deck. Other than that everything else is beatable with hunter being the best matchup.

If you attack with likkim you can equip the same turn doomhammer and attack one more time with doomhammer. Its a trick a do sometimes to push more damage and can be your exact lethal someday so have that in mind.

A big tip is to not overtrade. I have seen lot of people losing a game they should have won by going face but they trade instead. That's a hard thing to understand when you go for face or trade and the only way to learn it is by playing the deck and learn from your mistakes so you dont do them again.

Spirit of the Frog is the best card in this deck. It allows you to draw specific cards in an aggro deck and when it's played is 99% alive the next turn because of the stealth. If you have The Coin consider keeping till turn 3 to play it with Spirit of the Frog because it draws you a free 1 mana spell card.

Thunderhead was before buffs pretty good but after buffs is just too strong. The 5 to 6 health makes a huge difference because now it can't die from almost nothing if you play it for tempo at 4 and vs aggro decks and mirrors is one of the most important cards. Even vs warrior is good if you have pressed him early and has no armor at 4 and no board because 90% they cant remove it.

Underbelly Angler is one of the best cards in this deck that people tend to not undestand it. All you need is one other Murloc and you basically have one big flexible hand/board refill. You’ll draw those two Murlocs eventually and you have plenty of plays to make while you wait. It is also such a big target that your opponent will use their resources inefficiently to remove it, helping you stick an Unbound Elemental / Thunderhead down the line. And quite a few classes have no way to remove it if they didn’t draw a 1-drop and you’re on coin. All of that in a good stated minion. So try to find him on mulligan but always play him at 2 (unless you have a better play this turn) even without murloc follow up.

Doomhammer is your main sourse of damage vs Control decks.

So the hard part. Almost everything can be a keep in this deck and the mulligan changes if you have The Coin or not.

Underbelly Angler is always a keep if you have The Coin and it is what you are looking for vs all classes. You always use The Coin to play Underbelly Angler at turn one if they didnt play a minion and you have murloc to follow next turn (only rogue and shaman can remove it early so have that in mind). If they dont remove and you follow up with murloc especially another Underbelly Angler you probably win the game. I tend to keep it vs all classes and without The Coin for the highroll potentional to stick into a murloc follow up.

Doomhammer is never a keep vs aggro having The Coin or not. Vs control if you have The Coin you almost always keep it if not you keep it some times if you have good early hand.

Unbound Elemental is very strange and its kinda of experience of when you keep it or not. I tend to keep it some times if i have a good curve The Coin with combination of some cheap overload spells. Vs the conjurer mage is where i find having the most value keeping because they very rarely can remove it.

Likkim is always a keep vs aggro decks especially rogue. Vs control decks i tend not to keep it.

Lightning Bolt is sometimes a keep vs rogue because they have many 3 health minion.

Zap! is a keep only with combination with Thunderhead vs aggro and not always tough.

Earth Shock is a good keep vs mech decks only.

Voltaic Burst is rarely a keep vs aggro decks.

Sludge Slurper is almost always a keep unless you play vs rogue and you are on The Coin then you might considering not keeping but even there most of the times its pretty good. Dont always play it on turn 1 because you get overloaded. Like if you have Likkim and Sludge Slurper and you play vs rogue pass first turn Likkim second turn and play sludge slurper on turn 3 so you can abuse the weapons bonus damage to remove a 3 health minion rogues are playing. That's not always the way to go it's just an example to get what im saying about and it depends on your hand.

Feral Spirit is overvalued and overkept most of the times. Don't keep it always if you play against aggro decks it's not that good as it seems. I tend to keep it sometimes when i have The Coin and i play against aggro decks. There are more important cards in your deck so consider if your hand is good before keeping it. If i don't have The Coin i almost never keep it.

Earthen Might is very rarely a keep and only if i am on The Coin with Sludge Slurper or Voltaic Burst at turn 1 so i can coin it at turn 2 and the enemy class doesn't have an asner for my 1 drop. Don't use Earthen Might only on elementals. A lot of times pushing damage or getting a better trade with a non elemental minion is better than a random elemental especially vs aggro.

I took out the doomhammer burst package because it performed pretty bad in this meta. Meta decks at the moment are kinda unfavored for burst shaman and token decks are almost unbeatable without some board control ( like murloc paladin) . These additions fixes most of the matches , even the warrior matchup , and in my opinion is  the best shaman list out there atm. Burst shaman can still work but this one just feels better until something on the meta change. I will update the guide if that ends up the final version of aggro shaman because the meta is far from stable and nerfs probably coming soon to mage and warrior.