Let me start by introducing myself, my name is Goudhout and I am a dutch player that has played since TGT. I am player for TimeOut Esports, I hit legend every month, and I usually end at a decent rank in legend every month. I predominantly play aggro, because control is just too boring and aggro has worked for me in every meta.

After the latest nerfs to rogue the meta has shifted quite a bit. It has mainly decreased the amount of rogues that can be found on the ladder, but that has also effected the amount of warriors seen on ladder. On the other hand decks like cyclone mage, midrange hunter, token druid and murloc shaman have been all over the ladder. This opens up the meta for zoo to dominate them, so that is what I have done. I usually like to pilot a deck to a decent ladder rank before I make a guide about it, however I did not really have the time for this because I am just finished with my exams and I will be going on vacation soon. But I have played this deck a ton in the past throughout a lot of metas, and I have also used this to grind out enough points to join the battleriff pro league with this deck, so I think I have enough expertise on this deck to make a guide on it now.

Zoo is a deck that has just been around forever, it has seen play in almost every meta. The deck is focused on playing a bunch of small minions which can be buffed to efficiently trade into the bigger minions the opponent is playing. The deck usually runs away with the board early and then aims to close out the games quickly. Warlock provides zoo with a very good hero power that helps to get steam to refill the board after it gets cleared so you can keep going.

Here I will be comparing my list against another zoo list, usually I would compare my deck against the standard variant of the deck, but there are just so many different zoo decks out there that it is impossible to say which one should be considered as standard. So I’ll just mention what other zoo list do run that you can change in this deck, and my opinion on it.

So what some other zoo decks do differently is that they cut some of the one drop for more “Late game”, like micro tech controller, I do not hate this, because there are so many one drops that having one in your opening hand is almost guaranteed, but it synergises less with the magic carpet which is why I choose to play so many one drops. It does help to get some card advantage, because you are spending 1 card to make a board instead of 3 1 mana cards.

Then some zoo lists also choose to cut Leeroy Jenkins, I would probably never do this I think the burst from Leeroy Jenkins is really important because it helps you close out games that you otherwise wouldn’t have won. It also forces the opponent to play more conservative with his life total, because you can punish him if they do not.

Other zoo lists have been cutting Arch-Villain Rafaam from the list. I do understand why they do it, it is really useless in a lot of matchups and sometimes feels bad to play even on turn 7 with no other cards in hand. I still like have Arch-Villain Rafaam in my deck because first off all it provides for some very fun plays, and second of all it provides for some chances against control decks to do bullshit and run away with the game.

Per card explanation of why we run it

Here I will provide a brief explanation of the cards we run and why we do so.

Abusive Sergeant - This card serves to help you 1 drops trade with bigger minions, it is a really strong card in this deck and I wouldn’t recommend cutting it. The ability to let your 1-drop trade with a minion that cost more mana provides board advantage which is really key for this deck. But it also allows for you to develop even more onto the board because you went positive one mana, they pay more mana for their card that you did to remove it.

Argent Squire - This one drop is really good for trading, because of the divine shield it can often go 2 for 1 giving you an advantage on the board. Next to that the divine shield on the Argent squire allows it to trade into cards with lifesteal without giving the opponent more health.

Bloodsail Corsair - Well I actually forgot to cut this card from my deck after rogue was nerfed, because its main purpose was to kill waggle pick. But then it turned out that it did still have quite some usefulness against warriors, paladins, and hunters so I think it can still fit into the deck although it is questionable.

Crystallizer - This card is included into the deck because a 1/3 body on a 1-drop is really strong because it lines up well against the other 1-drops in the game which mostly have only 1 health. Next to that it also lines up quite well against some 2-drops when it is buffed by Magic carpet or Dire wolf alpha.

Flame Imp - This is basically a 2-drop for 1 mana, it is really strong. It provides a lot of early pressure and can also trade quite well against 2-drops and 3-drops. The downside of paying an additional 3 life is not an issue because we are the aggressor in most matchups.

Grim Rally - This card allows you to buff your whole board at the cost of just 1 minion which allows you to then trade into bigger minions with your small minions, and I have already covered how good that is when discussing the Abusive Sergeant. It is also good to kill of you scarab egg which turns the downside of killing a minion into a bonus of getting 3 1/1’s.

Mecharoo - Aside from this being another decent one drop which synergised with you buffs it is just a really good card to kill of with your Grim rally or EVIL genius, as it just gives you another 1/1.

The Soularium - This card is really insane, it allows you to draw 3 cards at the cost of only 1 mana. This card is often used best to refill you board after it just got cleared, it can also help you dig for a Leeroy Jenkins to finish out the game. Next to that it also synergises with Arch-Villain Rafaam because you will not discard those random legendaries at the end of your turn.

Voidwalker - I already explained this card when talking about crystallizer, only this card is even better because it has taunt.

Dire Wolf Alpha - This card is really good for buffing you minions allowing them to trade with bigger minions, and I have already explained this before so won’t do that again. What is important with this card is that you learn to position well, small minions on the right side, and big minions or minions with effects on the left side. This allows the dire wolf alpha to buff a lot more of your minions because if you trade a small minion and it dies the next small minion in line gets the buff allowing you to cycle your buff through a lot of small minions.

EVIL Genius - This card provides you with some extra steam to keep going, the lackeys are generally really good cards, and they are also 1-drop synergising quite well with the rest of the cards in the deck. This card also allows you to kill of your scarab Egg.

Knife Juggler - Because this deck plays so many small minions knife juggler can carry games on its own. This card just gives you a lot of juggles if you play it right which can help dominate the board or SMOrc your opponent down very quickly.

Scarab Egg - The deathrattle of this egg synergises well with the rest of your deck, and it is not really hard to activate with so many activators in your deck. This card provides for a lot of explosive turns to which your opponent can’t respond.

Leeroy Jenkins - Having at least some burst in an aggro deck is always good in my opinion, it allows you to close out many games and can often come in clutch if you are really close to winning the game.

Arch-Villain Rafaam - I have kinda explained this card already in the “What makes this list different” section, so I won’t do it again.

Sea Giant - Because we spam the board so hard with a bunch of small minions Sea Giant is often very cheap, and cheap 8/8’s in an aggro deck are just really strong because they are very hard to deal with.

here I will display a chart of the matchups for zoo combining the graphs from tempo storm, vicious syndicate and my own experience to provide the winrates. I will not include the winrates from HSreplay because they always seem very weird to me. 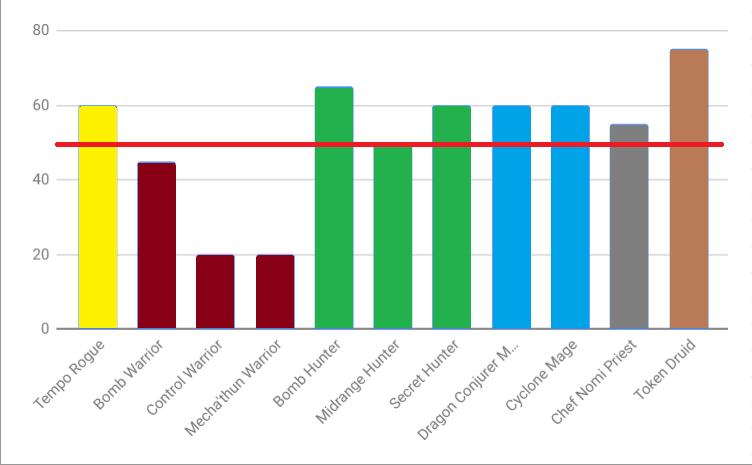 NOTE: Murloc shaman is also heavily favored for this deck but I am to lazy to create a new graph.

Tempo rogue
Against the tempo rogue’s, or the thief rogue or whatever you want to call them you usually want to start with some survivable 1-drops, like 1/3’s, mecharoo or argent squire, this is because the minions line up better against rogue’s removal which often does 2 damage. After your opening you try to dominate their board, as zoo usually does, make favorable trades and keep protecting you minions from rogue’s efficient removal. If you do this correctly and the rogue doesn’t do too much bs this matchups should be easily winnable. Rogue usually does not have AOE so you should not be afraid to go wide. In this matchup you do however have to watch your health a bit carefully as the rogue can kill you very quickly with their burst damage.

With the mulligan you are often looking to get 1 or 2 1-drops combined with one of your 2-drops. You are also always looking for the carpet as that card is really good in every matchup. This mulligan mostly stays the same between the matchups but there are some differences. Against rogue flame imp is the lowest priority 1-drop, as it provides the least survivability. Vs warrior and priest flame imp is the highest priority 1-drop as it is the most aggressive. Furthermore against druid giant is a keep.

Also I didn't make all of the card names fancy like this: Arch-Villain Rafaam, I wanted to do this at first which is why I sometimes randomly use full card names. But I decided against it since it is so much tedious work to make them all like that.

If you liked the guide then please gimme a +1 on the top here, I would really appreciate that.

Here I have a video to show you guys, its a video made by kiwiinbacon displaying gameplay of the deck, it really helps you learn how to play the deck in a more direct and visual manner, go check it out: