Hello there stranger. Be you a kissless virgin 97-year old, THE CHAD, or anyone in between, this deck is perfect for you. It can go wide, it can go tall, and it can go face (as a huntard should). Tired of those pussies playing removal? PLAY A MANLY DECK WITH ONLY ONE SPELL, AND THAT ONE SPELL IS HERE JUST TO MAKE YOUR OPPONENT FEEL BETTER WHEN YOU STOMP THEM.

What makes this deck special is that not only can it adapt to any given situation, it is also packing way too much value in tempo, as well as having certain combos as powerful as full fledged combo decks, hitting harder than a crackhead pimp hits his hookers.

Combos:
Boommaster Flark + Mossy Horror
Missile Launcher + Venomizer
Missile Launcher + Zilliax
Fireworks Tech + Mechanical Whelp (or any other deathrattle, like I give a damn)
AND THE SPICE:
Crazed Alchemist + Mossy Horror or Upgradeable Framebot, you can also use it to kill a goblin bomb or to make your Leeroy Jenkins smaller if you hate winning.

Added Guidance (Freeeeee Coaching):
1) Wide vs tall:
Going wide means playing mechs to the right of each other, maximizing the number of minions you control, while going tall means stacking magnetic mechs atop your other mechs to utilize their stats as if they had rush and to get better trades or avoid certain removal.

You go wide vs Zoolock, Token Druid and paladin.
You go tall vs almost everything else (I cannot list every possible tier 17 deck ¯\_(ツ)_/¯ ).
When you go tall you don't have to place everything on a single minion (that's usually bad), but just enough to dodge common removal cards such as Warpath, and to take trades without your minions dying.

2) Play Against Whirlwind Effects
Replicating Menace and goblin bombs can be killed by a single Warpath card (4 mana) or Fan of Blades + Rogue hero power (5 mana). When you have the luxury of saving this card, try to use its magnetic ability to play around these removals.

3) Matchup specific
Against Warrior:
Mechanical Whelp is your MVP. Make it tall to play around brawl when possible.
Against Mage:
If you open Mecharoo + Fireworks Tech on coin, pass turn 1 and coin them out turn 2 to play around their hero power.
Try to keep a Venomizer and/or Spider Bomb through the game to kill their big stuff when you can.
Against Druid:
Clear everything. If you can get Missile Launcher combined with Venomizer, that's an instant win, just keep stacking stuff on top so he can't double Swipeit or something ridiculous like that.
Against Hunter:
Go wide when possible. Stack tall to get better trades.
Other matchups are just you playing pretty regularly. The deck isn't as simple as it may seem due to the nature of the magnetize mechanic.

If you need any other tips, ask in the comments, I respond as often as I can.
If you guys show interest I can start making video guides for future decks.
If you guys play on EU and have trouble climbing, you can hit me up on HS, sometimes I can't talk if I'm at University and playing HS (yeah, I'm a shithead lol), but most of the time I'll gladly answer questions.

YO GUYS: My Hearthstone is getting crowded with messages! If you wanna talk and be sure I hear you, you can join my Discord channel made especially for you guys! I will be chilling there most of the time that I'm playing HS.

14 damage burst next turn makes me a happy huntard: 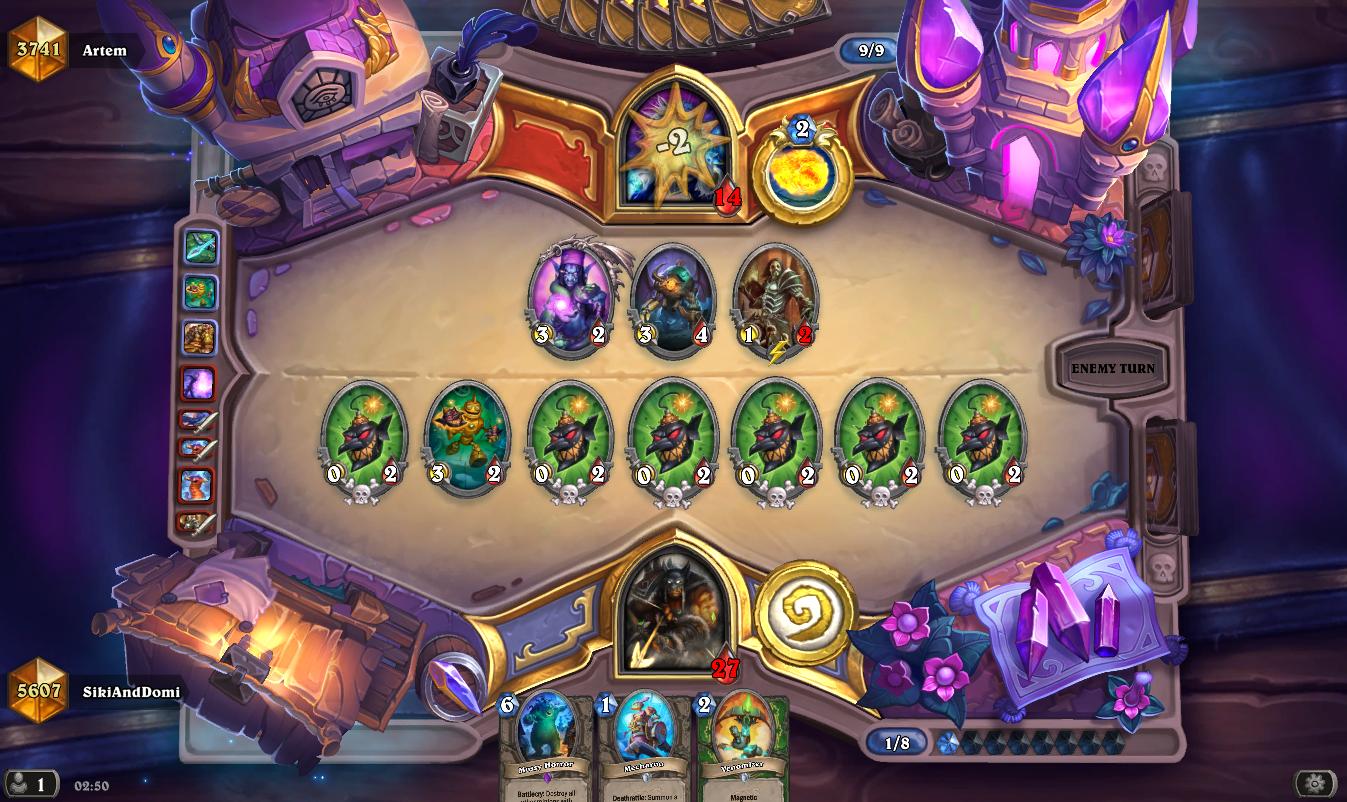 Proof of legend with timestamp: 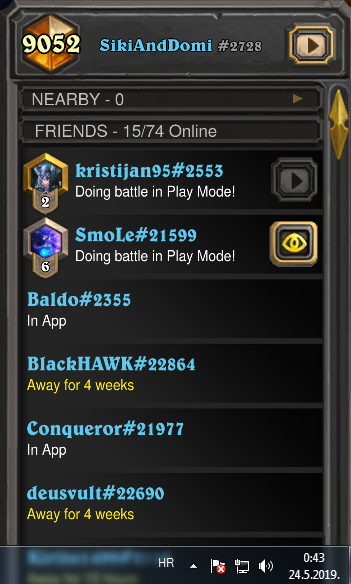 mira#2399 hit legend for the first time with this deck!
I'm so glad you guys find success with the deck! 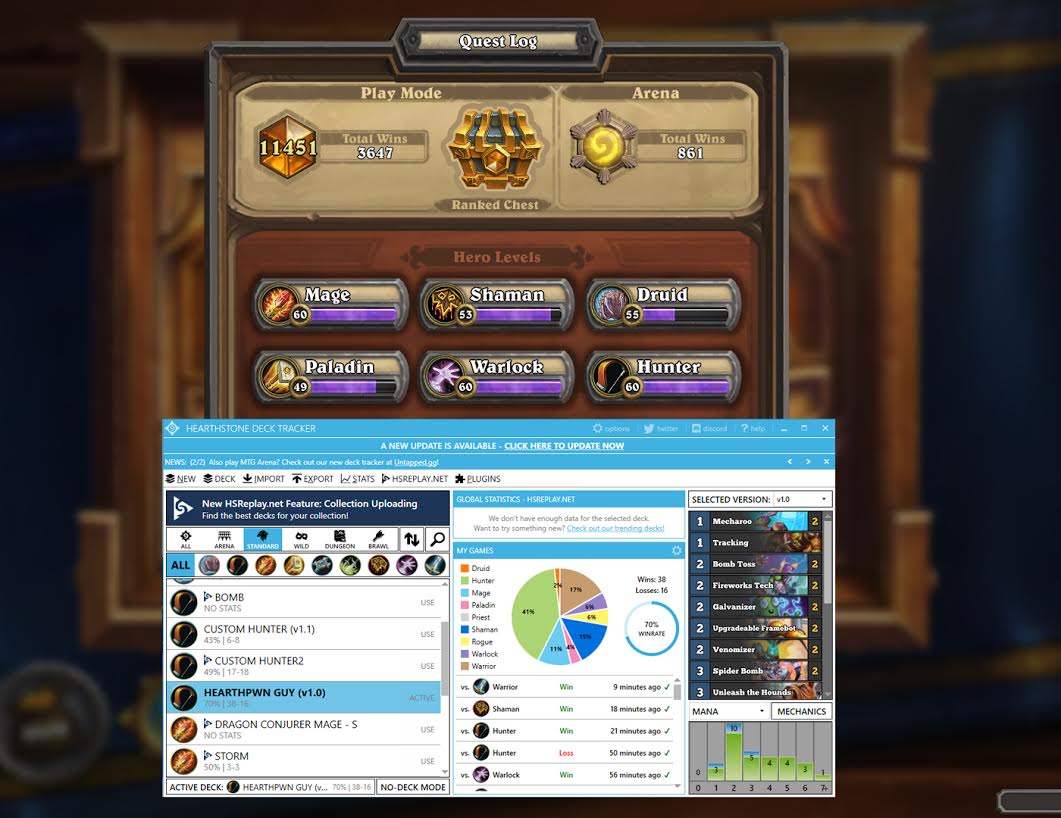