If you like this deck upvote so more people will have a chance to see it.

Boommaster Flark -> Cybertech Chip (it's not as that powerful but it allows you to get more steam during slower matchups.

Zilliax -> Bronze Gateakeeper (that's the best budget replacement, i tested it out in my video and off stream and it works really well). Other Cards:Safeguard, Mossy Horror, Rusty Recycler (Imo just craft it but if you are really on a budget try those replacements)

Leeroy Jenkins -> Reckless Rocketeer or Argent Commander (another card that you should craft but ...)

This is a simple aggro deck with sticky board. You just have to balance magnetizing. Sometimes going all in for one minion is not the best strategy because it can be countered by silence or polymorph (Hex). You need to know with what you are dealing. Do they have more AoE or single target removal. Game plan: Play on curve (just follow Mullligan guide) as a finisher use Leeroy Jenkins or Missile Launcher + Venomizer.

Tracking - you will discard two cards but thats not important. You can get a card that you want for example lerroy jenkins to win the game (btw its worth discarding two cards to win the game) also you acn discard bombs o get less faec dmg.

Dire Wolf Alpha + Unleash the Hounds - clear the board when you are behind or push for more dmg. you can also replace those 2 cards with 2x Bronze Gatekeeper

Boommaster Flark - maybe it's not worth crafting because you can use it in one deck but at the same time this card is nuts in mech hunter. 7 mana deal 8 pts of dmg and get a 5/5 body but on top of it if opponent wont be able to deal with it you get more dmg thanks to magnetic = win/win situation where both wins o to you

Zilliax - attach to big mech -> profit (this will win you a lot of games specially agaisnt aggro decks.

Leeroy Jenkins - do i have to explain it? ... face is the place (just remember to shout out loud 'LEEEEROY JEEEENKINS!')

Missile Launcher + Venomizer - Clear the whole board. Later you can attach more mechs to this target. 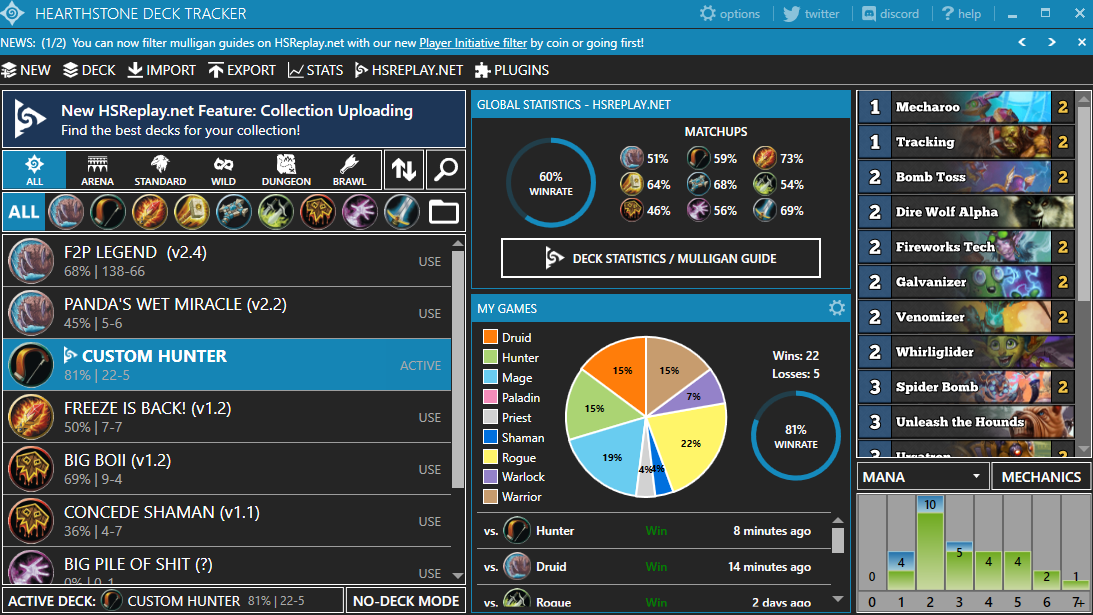