This mech paladin list, over a sample of 95 games from rank 3 to legend, was able to hold a convincing advantage against the four most popular decks: Tempo Rogue, Control Warrior, Token Druid, and Hand Mage. That said, if you draw well, you can beat any deck, from Big Shaman to Nomi Priest. It's not super difficult to pilot and games take about 10 minutes to play out.

The basic game plan is to abuse Kangor's Endless Army along with heavy magnetic minions such as Zilliax and Wargear if you don't overwhelm the enemy with 16/27 minions on turn 6. Since you only have a single copy of Kangor's Endless Army, Prismatic Lens grants an absurd degree of consistency in finishing games against even fast decks like Zoolock. 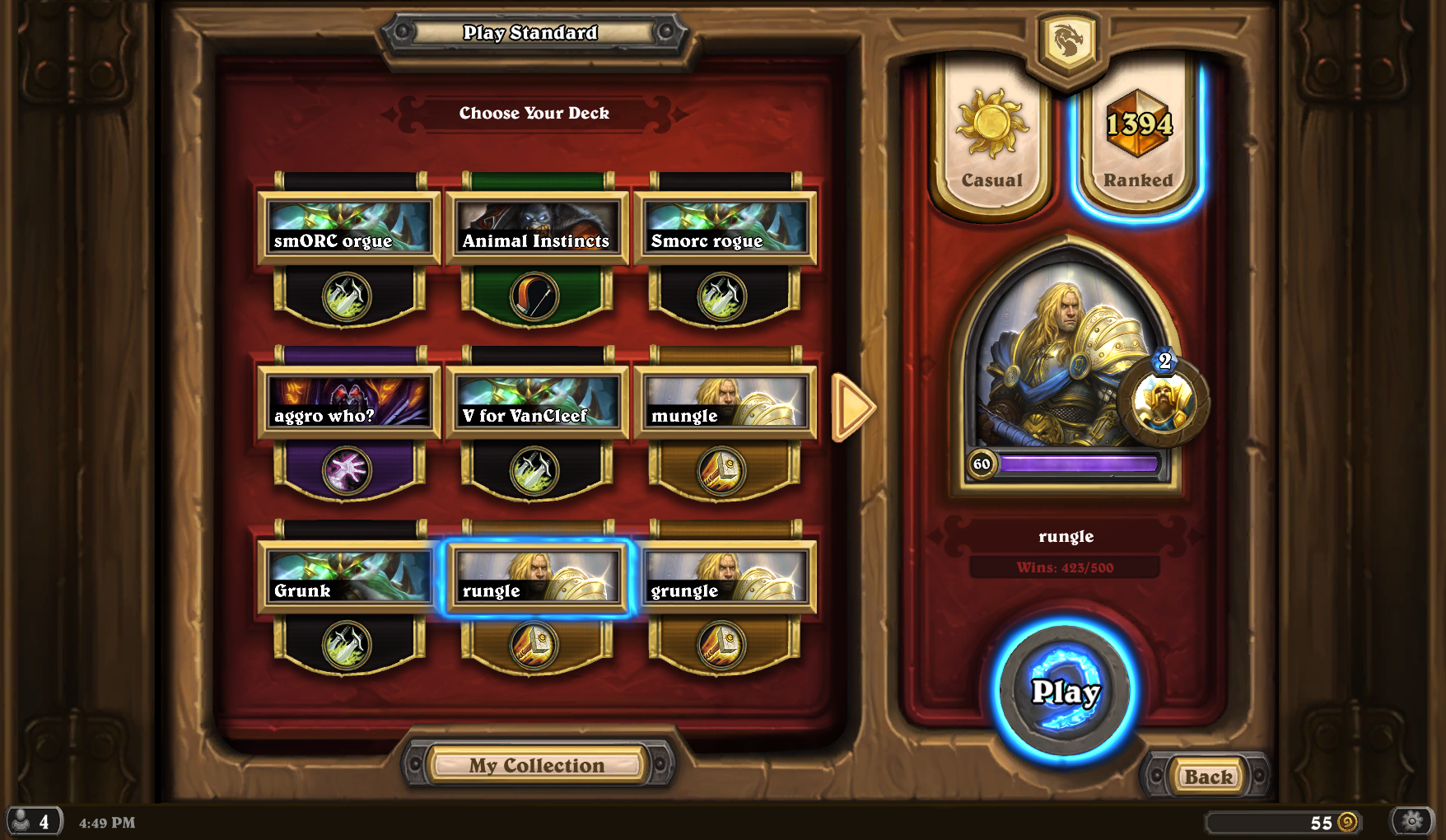 VS Aggro (Rogue, Hunter, Druid, Warlock, Paladin): There are currently zero aggro decks out there that don't get completely shut out by turn 1 Glow-Tron into turn 2 Upgradeable Framebot into a Bronze Gatekeeper for a 1/3 and a 2/10 taunt on turn 3 with an Annoy-o-Module on the way. Against fast decks, you're looking for any of these cards, along with Consecration,Zilliax, or Galvanizer

VS Control (Warrior, Shaman, Mage, Priest): In these matchups, simply putting up high health taunts isn't going to win you games. You'll need to draw your high attack magnetic tools at some point, but you don't need to mulligan for them. Starting with Galvanizer and magnetic minions to snowball such as Annoy-o-Module and Glow-Tron is a great way to win out of the opener. 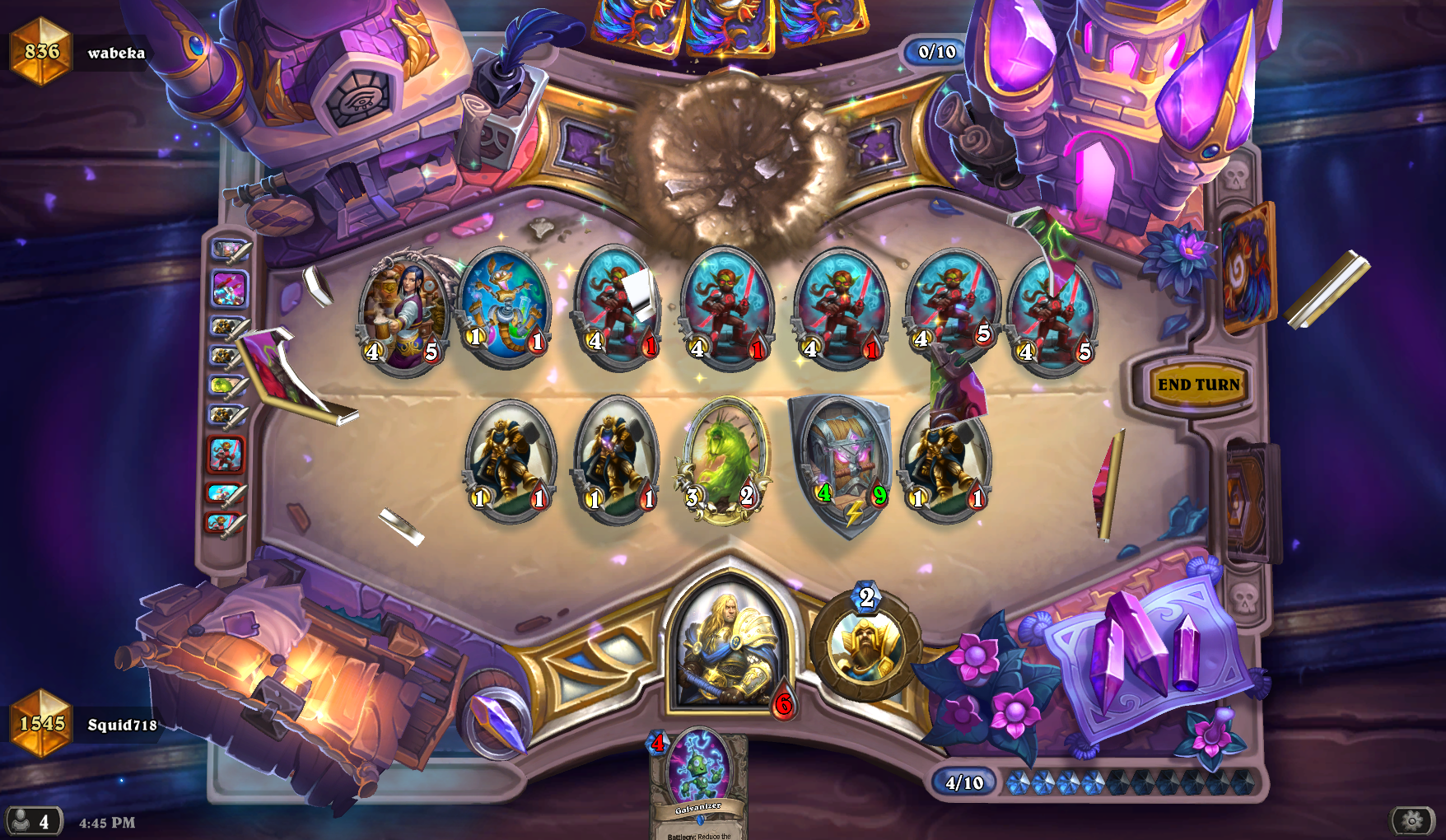 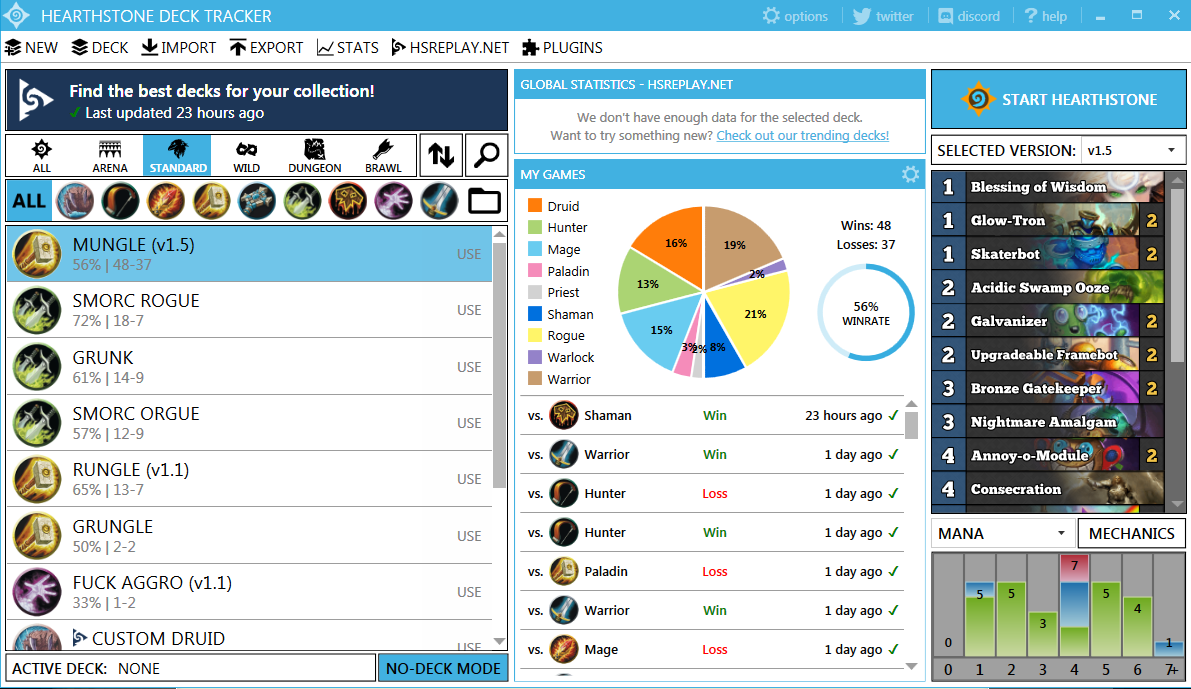 Druid: In this game, your first and only job is to stabilize the board and leave the druid with as little to work with on board as possible. Earlygame, you should expect things like Acornbearer, Dreamway Guardians, and Keeper Stalladris. To combat this opener, landing an early Upgradeable Framebot or Galvanizer to magnetize to will go a long way. Although druid lacks any meaningful single target removal this expansion, be sure not to pile all your mechs onto one body. Remember, the only way druid can beat you is with a wide board. Having multiple guys to clear out the tokens each turn is great. Outside of the earlygame, your strongest anti-token tools are Consecration and Missile Launcher, which directly counter The Forest's Aid and Wispering Woods respectively. Once you've effectively established yourself on board, you can move to playing your lategame threats and pushing for lethal with a single huge minion. As far as heal druid, you literally cannot lose. I don't think it can be done. This is heal druid's worst nightmare: a deck with huge minions that can efficiently deal with lucentbark while at the same time not hit face until a board is established. I won 11/18 games against druid and consider this matchup very favorable.

Hunter: The most common deck on ladder is the Mech Bomb Hunter deck. This deck has EXACTLY the same gameplan as you do: Play mechs early on and don't get swept off the board so you can play a magnetized Wargear or Zilliax on curve. Unfortunately, the hunter's method of using Goblin Bomb tokens is a little more efficient than playing mechs from hand in the earlygame, so oftentimes you'll have to mount a comeback for board control. While Mungle Paladin crushes in the lategame, your challenge is to survive that long. However, the Mungle list comes complete with ample tools in this regard, the most effective being the resurrection of a Zilliax minion with Kangor's Endless Army to heal off a large portion of the damage the hunter deck passively burns you down with as the game goes on. The matchup isn't easy, but not unwinnable in any regard, with the main reason being the fact that hunters, like druids, are reluctant to run silence or single target removal, meaning you can magnetize up a single minion and kill them with it. This matchup isn't very favorable.

Mage: The trendy mage deck out there is to play minions only for Book of Specters value and to storm you off the board with Mountain Giant and duplicating it with Conjurer's Calling and Khadgar. Unfortunately for them, your DIY giant minion doesn't have to deal with Polymorph, or silences of any kind, so most of the time you can slap some mechs together and they'll concede. On the off chance they do get a giant down, you do need to remember to kill it, or they'll pop off with the aforementioned combo. But if you can remember to do that, you're golden in the mage matchup.

Paladin: Every paladin and their grandmother is running Desperate Measures and Mysterious Blade along with Sunreaver Spy to fight for early board control. Paradoxically, they don't run any earlygame mechs, so you can simply storm off to a victory with any combination of magnetize guys. Paladin again makes one of the classic blunders and doesn't have any relevant removal for your mechs, so if you manage to curve out, they don't have a chance. This seems like a 50/50, but I've literally only seen 4 paladins over 140 games, so you don't really need to worry about this one much.

Priest: This matchup is super hard to win. Most priest decks right now run two Silence and at least one Mass Dispel, making your single minion gameplan pretty bad. However, simply going wide with your minions doesn't especially help either, since Mass Hysteria is a two-of in every deck. To beat priest, you basically need to get lucky and hope they don't draw all their silences. You have the initiative and they have to answer you, as efficient as their answers are, they could simply not draw them or not be willing to run Silence. Overall this matchup is very unfavorable, but given there are very few priests out and about on ladder, this won't hurt your winrate too much.

Rogue: Firebat made a great video outlining all of Tempo Rogue's strengths and weaknesses, and this deck is basically the dream of anti-rogue gameplay with early Glow-Trons and Bronze Gatekeepers into Annoy-o-Module, you have a lot of ways to put high health taunts on the board. However, unlike most classes, Rogues do have efficient silence/removal in the form of Sap. This can be problematic for you, but it's best to play your taunts individually until they eventually give up and sap one. Having one big guy isn't as good as lots of small mechs in this type of game. You're playing to slow the game down and trade efficiently using divine shields. Rogue's best chance to beat you is with an Edwin VanCleef highroll, which is hard to beat unless you're already ahead on board, which is unlikely. https://www.youtube.com/watch?time_continue=1&v=Bm58KwBuuJQ Overall, this is a rogue counter, doing better in that matchup than the classic secret package paladin. You'll be playing this matchup a lot, just remember to play around Sap