Hey guys, Nana here once again bringing you another fun deck to play in Rise Of Shadows. This is is a version 2 of a ress priest deck I've been having some success with on the ladder since the version 1 will be in wild soon. Here we go;

Forbidden Words, Zilliax, Mass Hysteria as well as any other minions on board 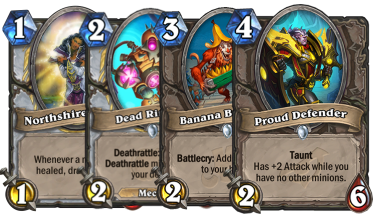 Hand to go for vs aggro. Forbidden Words, Extra Arms, More Arms! and Power Word: Shield help you to control the board in conjunction with Northshire Cleric or Dead Ringer in the early game.

Same idea as in vs. aggro decks. If your opponent seems to be slow relative to you, you can go straight ahead and start your shenanigans with Recurring Villain.

This is how simple a normal game will go for you;

The first version had to do with resurrecting Zerek, Master Cloner as many times as possible with the help of various spells ( decklist will be at the bottom) and this one is even better. WIth the new changes to Da Undatakah on the latest patch, our goal is now to summon a bunch of 8/5's instead of 5/5. From now Da Undatakah will ressummon himself when he gets the deathrattle of Zerek, Master Cloner and it's safe to say that the same applies to the new ROS card, Recurring Villain

You can leave your suggestions and questions in the comments below and if you like the deck don't forget to give it a +1, thanks. Note that the deck is subject to change in the process of fine tuning it for ladder.