Hello everyone, in this guide I will cover even paladin, and everything that you need to know about the deck.

Now first of all why you should listen to me. Let me start by introducing myself, my name is Goudhout and I am a dutch player that has played since TGT so that is about 3 years I believe. I a player for TimeOut Esports, I hit legend every month, and I usually end high in legend every month. I predominantly play aggro, because control is just too boring and it has worked for me in every meta.

Recently odd paladin has been nerfed, so I was looking for something to play, master's call hunter worked good, odd rogue was fun, and then a friend of mine recommended me to try even paladin again. The deck is really good and I have now spend quite some time with it, I also took it to top 100 legend: 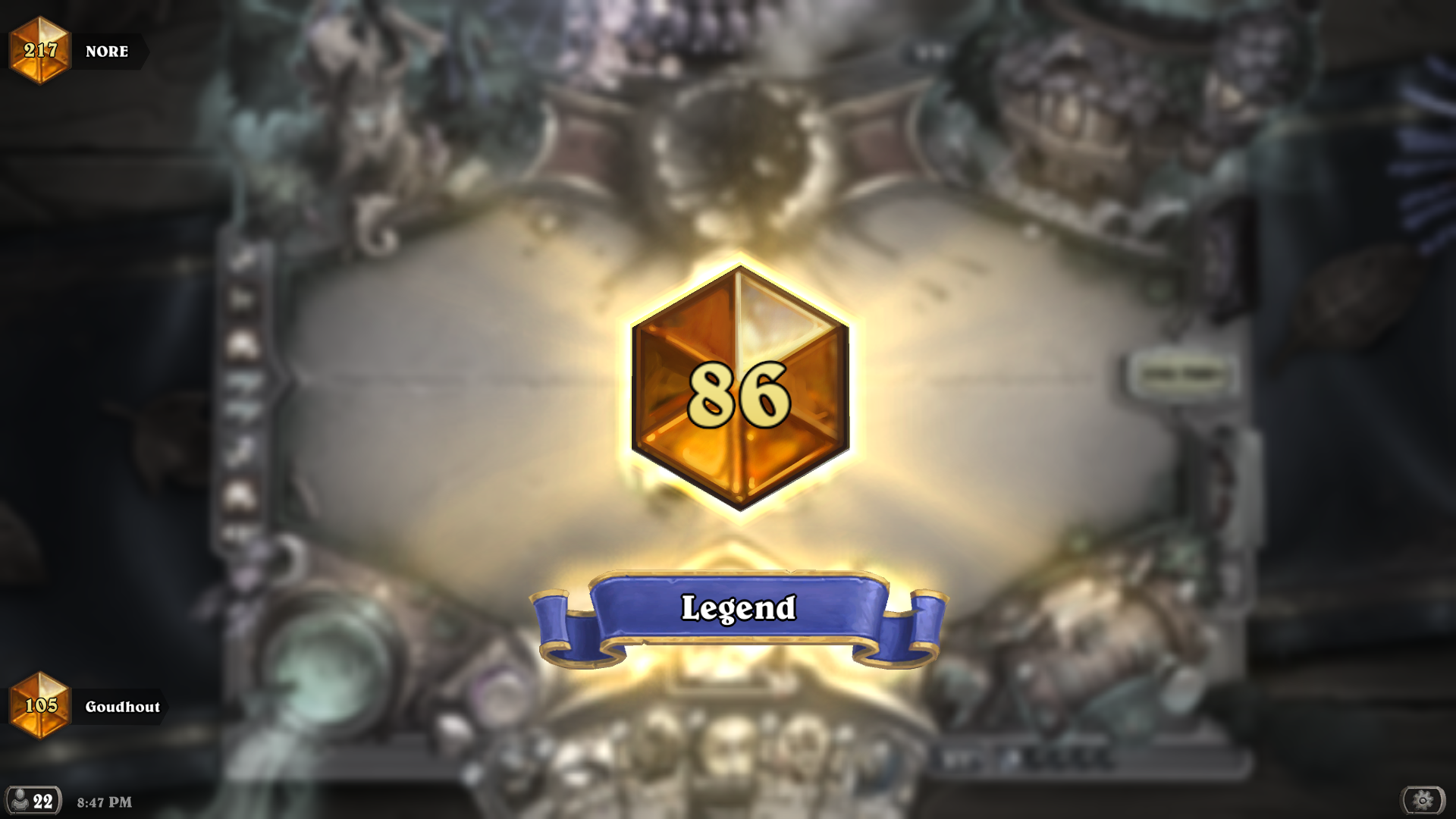 Even paladin is a deck that utilizes the 1-mana hero power granted by Genn Greymane in order to get well ahead on board. The deck can be very good as a midrange deck and can be teched to be either more aggressive or more controlish. The main gameplan of the deck is to get ahead by using our 1-mana hero power together with our 2 drops and 4 drops. Then we can control the board using powerful tools as Truesilver Champion, Consecration, Equality and Avenging Wrath.

In previous versions of my deck guides I would here compare my list to a standard list and discuss all the changes, however I will not do that now, as the guides are already pretty long and I explain most of it in the next section anyways.

The list that I run is a more aggressive version from even paladin. Some notable cards that are missing are Spikeridged Steed, Saronite Chain Gang and Mojomaster Zihi. These cards have been cut in order to include more damage into the build with cards such as Bonemare, Tirion Fordring, Knife Juggler and a second copy of Avenging Wrath. This makes the list quite a bit faster and works better to help and shut down control and combo decks very quickly.

I personally really like this more aggressive approach to even paladin because it fits my playstyle more.

Per card explanation why we run it

Acidic Swamp Ooze- First off all this card is a 2 drop, and in an even paladin deck you are gonna need a lot of 2 drops because you can not just skip turn 2 and 3. This card can be played on turn 2 or 3 just for the minion. Next to that is also removes weapons which can be very good against hunters, OTK paladin, cubelocks and warriors. In some matchups it might be worth saving this card to destroy a high value weapon.

Argent Protector - This is again a 2 drop, this card provides good protection for some of your high value minions, it can protect Knife Juggler, or give Corpsetaker another divine shield, but it can also be used to give a 1/1 divine shield on turn 2.

Equality - This card is really good in a lot of cases, you can combine it with a lot of dudes, or with Knife Juggler, Consecration, Avenging Wrath or Wild Pyromancer.

Hydrologist - this is another good 2 drop and it also provides good utility with various good options for secrets.

Knife Juggler - This is again a 2 drop, this card has not seen a lot of play in recent versions of even paladin but this card is still really good in my opinion. The deck still has the ability to summon minions very cheaply so Knife Juggler will often get in 2 or 3 damage which is still quite a lot for a 2 drop. Also if you are lucky enough the card has insane carry potential.

Wild Pyromancer - Next to this card being a 2 drop is provides really good opportunities to clear the board. With Equality this card will always full clear the board, but this card also provides a nice buff to Consecration and Avenging Wrath.

Blessing of Kings - This card is really good allowing you to make big boys early on. The card can also be used as some good burst and in combination with Corpsetaker can shut down games easily.

Consecration - This card can turn the tide in the mirror or when facing any aggro deck. When you skip turn 1 by playing just a 1/1 you will probably lose to other aggro decks, then this card can help you to still win the game. Also against control decks it can clear a board full of big taunts in combination with Equality.

Corpsetaker - If this card hits the field with all of its buff it is insane, this card can easily carry games on its own. Also there are not a lot of answers for this is the current meta.

Spellbreaker - This card provides really good utility to the deck, it has a lot of applications in the current meta. Most importantly this card can silence big taunts in order for you to sneak that last bit of burst damage in there.

Truesilver Champion - This card can do 2 things, it can either be used to provide quite some face damage. Next to that you can also use it to clear 2 midrange minions from your opponent's board. The card is pretty good overall.

Argent Commander - This card is really good at burst damage. Furthermore it also serves as a good 6 drop being able to freely trade for one of your opponents minions and it provides Corpsetaker with divine shield for if you draw Tirion Fordring early on.

Avenging Wrath - First of all this card is really good at clearing the board together with equality, next to that the card can also be used as face damage.

Genn Greymane - This card almost makes the name for the deck.

Sunkeeper Tarim - This card is just insane, it can instantly make a small board quite threatening by buffing your own minions, and it can also turn the big taunts of your opponent into small 3/3’s.

Val’anyr - This card provides good finishing potential. It gives you a lot of damage to throw at your opponents face.

Windfury Harpy - This card is only in here to provide corpsetaker with windfury.

Bonemare - This card will often catch the opponent off guard, it provides a big taunt against aggro decks and it provides burst damage against control and combo decks. This card is just quite strong by default.

Tirion Fordring - This card buffs up your late game by a lot, a weapon that provides you with 15 damage on top of a 6/6 taunt with divine shield is just nuts.

Here I will quickly provide an overview on the synergies between cards, because most of them are pretty obvious I will not go into detail.

Like I mentioned before the list I run is a really aggressive list, some of these cards can be exchanged in order to make for more defensive builds. If you need to make room for other cards I would recommend cutting the following cards, as they are less core than other cards:

There are a lot of good cards in the game which you can tech into this decklist, but I will still highlight some of the best ones:

The following graph will display the winrates this deck has against other decks, these winrates are based on my personal opinion on the matchup and stats from HSreplay and tempostorm’s meta snapshot: 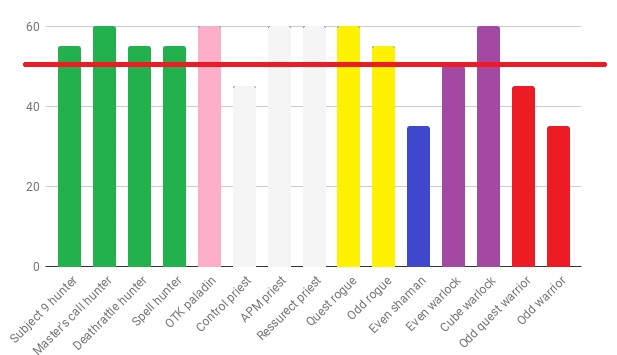 Normally I would discuss the strategies for every single matchup individually. I have decided to not do that this time around because a lot of the matchups go pretty similar so I would just be repeating myself a lot of times.

against aggro you mainly play for the board control, you will probably fall behind early on because a 1/1 does not stand a chance against an actual 1 drop. In the later turns you will need to swing the board with some of your board clears and then you will probably win the game.

This is once again a matchup that is about board control, but this should be easier as the game will take longer giving you more time to find your board clears. In this matchup you can usually play the control game as your late game is really strong.

Against control you should play fairly aggressive, but you should be able to as this deck is full of damage. You can also use cards like sunkeeper tarim and equality in order to remove a really big board to make space for more damage. You need to realise that your late game will not stack up against their late game if it takes too long.

This matchup is a lot like the matchup against control, but here you can be more aggressive as they have a lot more dead cards and they are most often tuned to kill control decks rather then more aggressive decks.

To end the guide I also want to quickly cover the mulligans, most of the times you are just looking for 2 drops and Corpsetaker. If you know what deck you are going up against you can also keep some more specific cards. If you know that you will be playing against an aggro deck then you could keep a copy of Consecration or Truesilver Champion. If you know that you will be going against a control deck then you might consider keeping Blessing of Kings as such a big minion might be very hard for your opponent to kill.

If you liked the guide then please gimme a +1 on the top here, I would really appreciate that. Now if you don’t mind lemme just thank some people and put down some links.

Also I would like to thank Pbarbosa7, he recommended me to try the deck and he shared a lot of wisdom about it to me when we played together. The list that I play is basically his list, but I cut the second copy of acidic swamp ooze for a second knife juggler. You can find his twitter here:

I got a really cool video for all of you, this one is from kiwiinbacon. I would highly recommend that you guys check it out:

And another video, this one is made by Max evo, its a really good video and you could definitely learn something from it:

I got another video for you guys, this one is made by Khristophesaurus Dinosaurus, really nice work!