I tried bunch of decks in Brawliseum and this is the one that actually went the distance for me. It is good old Malygos druid, so sorry it is nothing new or interesting, but I do run one new card which I wanted to try since it was revealed Wardruid Loti. I put it in the flex slot where people usually ran either The Lich King or Mind Control Tech. And what I found that in a lot of matches MCT is either useless or stills a 2/2 on average. I still run one copy, but I'm not convinced the second copy is neccessary, and Lich King is often way to clunky, not to mention the antisynergy with Ultimate Infestation as useless Death Knight cards would clog your hand and only around half of them are potentially useful. 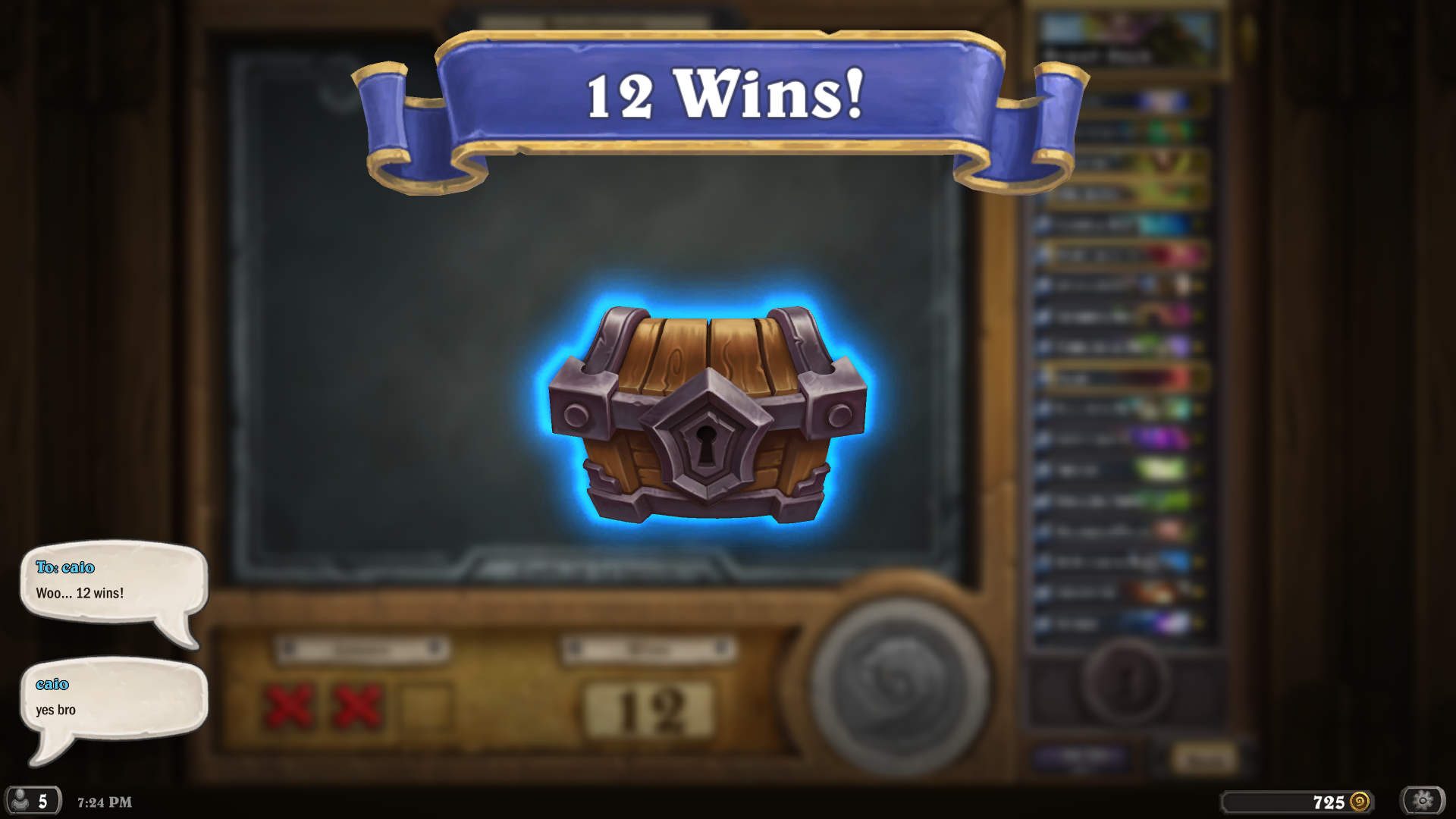 Always keep Wild Growth, Nourish, Twig of the World Tree and if you already have ramp consider keeping Ultimate Infestation also Wardruid Loti seemed to be good keep against most decks, but don't have enough data on that one yet.

Specifically against Paladin keep Swipe because of Odd Paladin, also consider keeping Swipe against rogue because of their weapon synergy minions. Though against rogue not as relevant unless Odd Rogue comes back...

Against slower decks (Like if you expect Odd Warrior or Control Priest for example) consider keeping combo pieces especially Malygos and if you have him Dreampetal Florist, because you don't want Malygos to be bottom of your deck and want to land a discount on him as soon as possible (swipe or moonfire don't hurt as much in the bottom of the deck as they don't need a discount setup)

Remember that Combo is only one of you win conditions, if Malygos is not coming to you but you happen to have a big board, try to look if you can just SMOrc you opponent to death with your minions on board, especially if you have branching path to buff them. Also maximum damage potential is only around 52, so if your opponent is above that mark you would have to beat him down with Malygoses after comboing out, so keep that in mind and prepare for it.

In early game if you don't have UI trying to cycle with something else is ok, but if you do, don't forget to do all possible to keep you hand as free as possible, and don't waste combo pieces unless you are against aggro where combo usually doesn't matter and you want just to survive. Something to consider about combo pieces is that second swipe is usually only important against classes which have lots of healing/armor, to others you can just do a bit of chip damage to keep them in range.

Also against Druid and Warriors, try to keep their armor down at all costs (except wasting combo pieces of course) like hit them with DK hero power to face and stuff like that.

Early Alexstrasza is often fine against classes that don't do healing usually (or do armor instead) or if you really need an 8/8 on board for threat to force opponent to trade.

The way you do discount is, you always try to have only Malygos in hand if possible. against classes that don't get armor you might want to even throw away floop out of hand for tempo just so that you can combo off 1 turn earlier and not risk missing the discount. If discount does hit floop consider what is better to just play tempo Maly and than 4 mana maly next turn, or instead just play a 0 mana 3/4 Florist Floop to have 2 mana Maly for the future...

If you are going to break the twig and don't expect weapon removal you can drop florist when Maly and Alex are both in hand, because with twig you can just do Maly, break ,Alex or Alex, break, Maly and then burst them down from 15 health...

First match was against spell hunter. Nothing special there was timing well my removals and trying to preserve them. Trying to keep Plague for the wolves, which paid of. Did an early Alexstrasza but against hunter it doesn't matter as he is not likely to go above 30-35 health, just needed to keep him occupied. Was still doing chip damage after so 12 and 15 break points are important to remember as it is double moonfire and Swipe + moonfire...

second match against secret hunter. I got a bit lucky to have twig with Malygos early. ended up playing malygos and breaking twig to clear the board with swipe and do some hefty face damage. wasn't enough to kill the opponent but put him low enough that he would have trouble to come back.

Third match played against what seemed to be Togg or Mechathun  Druid... Basically for me it was race to the face, which I eventually won.

Fourth match against Spell Hunter. What happened is that my opponent didn't draw DK or Weapon and ran out of cards, but my Maly or any burst wasn't just showing up, so I just decided to be agressive with my minions and played aggressive Alex, Alex got freezing trap, but it wasn't a problem because I had florist, and as I still didn't drew Maly I just discounted Alex and SMOrced opponent to death. It is important to not wait for combo when opponent is out of cards and just go on offensive, I did that and then Loti as a 1/6 taunt was just enough to get me exact lethal...

Fifth match against Even Shaman... holding back my second Spreading plague for better value and also demonstrates the twig activated combo.

Sixth match... loss to a Mecha'thun Druid. I just lost race to the face and was never in my burst range... but in the very end I misplayed a lot, I realized it was mecha'thun too late, I should have left his spider alone, just armor up, don't play minions and let him take fatigue damage until I can burst him down with my Maly damage... but instead if let him remove his guys which lost me the game...

8th match... Against deathrattle rogue... Yes waiting for malygos with his somewhat explosive start wasn't an option, so instead I managed to do a decent wall of scarabs while landing a really good Swipe and then chip damage the opponent until I got lethal with branching path on 2 remaining scarabs. Also well timed removals on 7/7s was important, don't try to remove their deathrattles most of the time, remove what comes out of them when you can...

9th match. Well try to survive against odd paladin. But then when I stuck minion on the board I was feeling safer already. But important thing to remember is that if you do have minions on board and branching path, don't forget to search for lethal especially if you have ways to remove taunts... on turn 10 it is really pinacle of alternative win condition. Try to spot the lethal puzzle basically, because I first dealt bunch of damage to taunts, buffed up my board ahead of time, hero power + break the twig to kill one of taunts and then after the twig is broken I alex opponents face for exact lethal with branching path... if you have board and expecially twig shenanigans for extra burst possibilities, always try to look for this +2 attack lethals...

10th match Another deathrattle rogue. This time I was pressured a bit, so had to tempo 2 mana malygos just to remove his board and then waste 6 damage of moonfire on a minion in hopes that malygos sticks... luckily for me even though Malygos didn't stick he got just sapped and I still had second moonfire coming and opponent had no heal. (opponent conceded because UI basically drew my deck so chances were I had the moonfire)

11th match against some kind of OTK paladin. had to tempo malygos just to activate floop as malygos. didn't immidiately play moonfire because if malygos sticks I had potential of 11 daamge instead of just 6. Opponent played timeout, but luckily for me Maly couldn't remove maly anymore so the next turn died anyway. If he could remove maly plan was to not play minions anymore and just wait for second moonfire draw which would give me 24 damage including DK hero power. I was on the clock so had to take that risk. Though I also planned to screw the opponents combo by using naturalize.

12th match. Odd Paladin. Yet another match where I tried to survive, managed to stick some minions and killed him with Branching path...

13th match. seems to be another OTK paladin. But I managed to draw my combo very early. And that is why you gain percentage points, because if you don't need to draw your whole deck to kill your opponent you have an advantage.

14th match. Against odd warrior. Just made sure to do chip damage so that he doesn't hill out of range. Also see how I made lifesteal guy the priority target, it was so that I can safely Alex opponent next turn. Twice I was 1 damage off lethal, but didn't pull the trigger too early, because if Maly gets removed and then he heals I could be screwed, so instead I was power drawing to find floop.