If you want to perform well with this deck, I strongly recommend reading the full guide carefully! It will probably be much more efficient than the trial and error approach.

I hope you will enjoy the deck! If you have any questions or feedback, please leave a comment.

Inspired by Kipp's Bazookadin, I made my exceptionally powerful Holy Wrath deck. I have been getting 12 wins in the Brawliseum more than half of the time. I just love the sweet gold! I also hit legend without much difficulty.

The deck takes some practice to pilot since we constantly have a lot of cards in our hand. However, it is irresistibly fun and satisfying when you hit that 25 damage on your opponent's face! 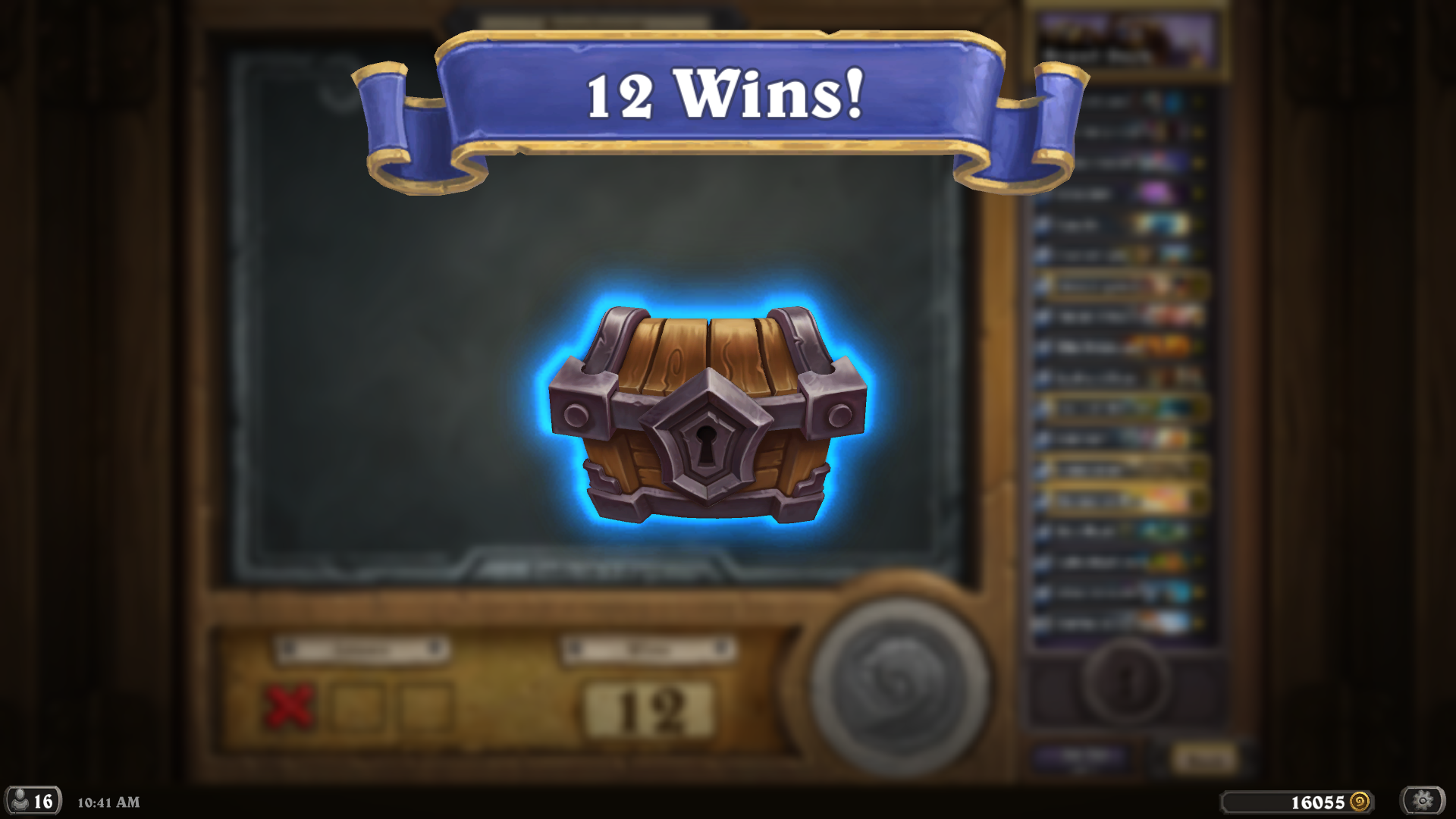 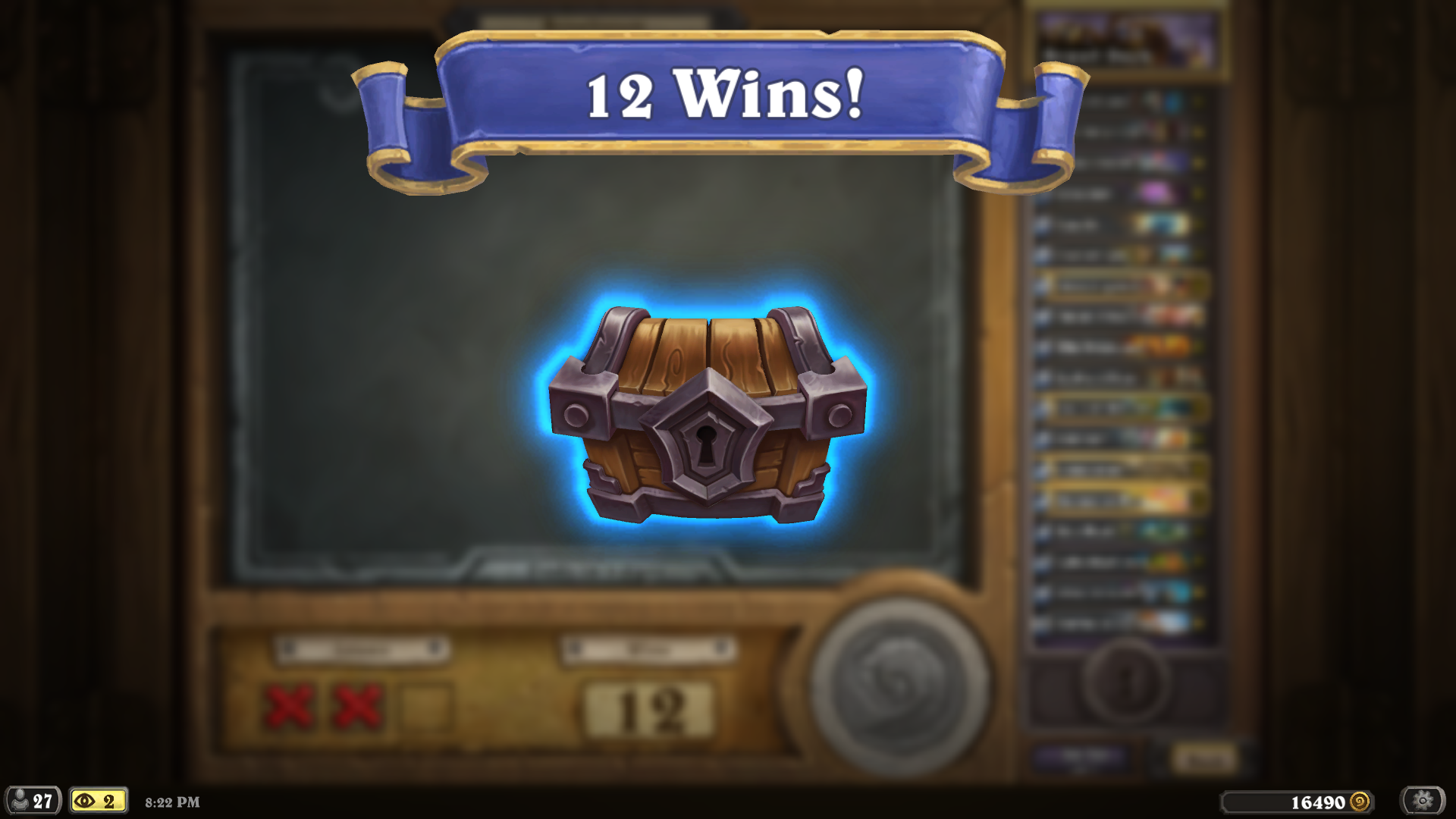 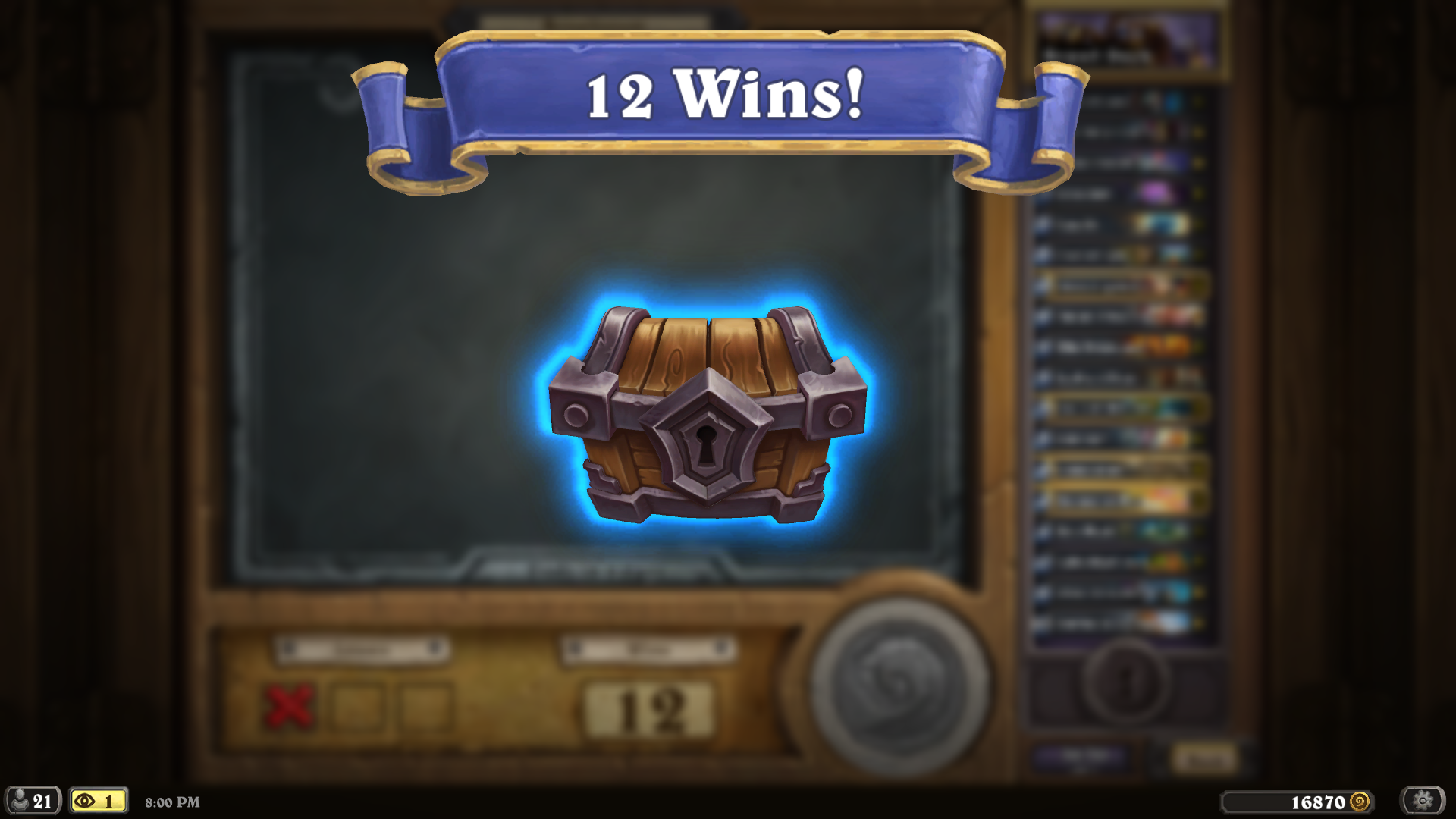 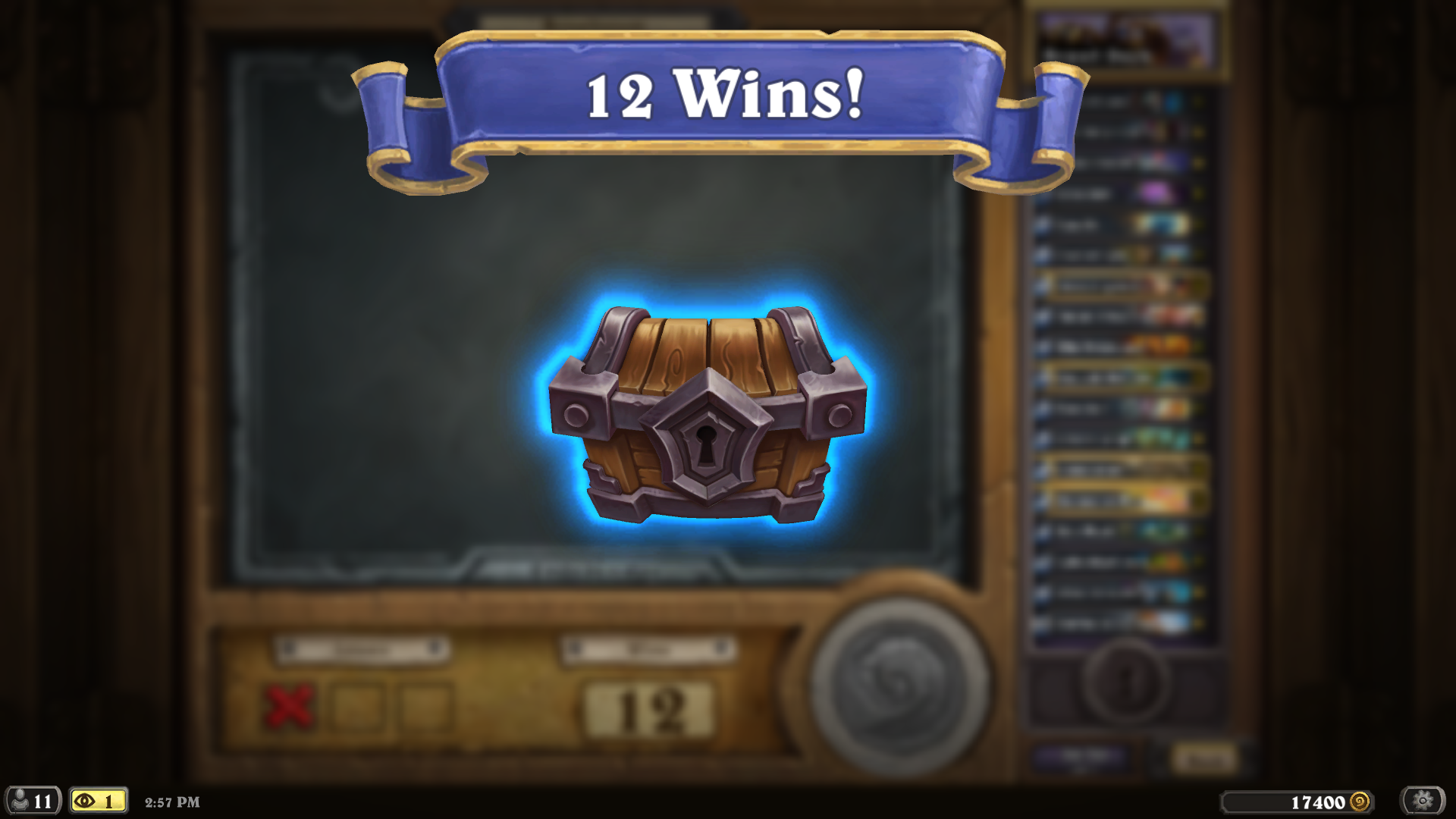 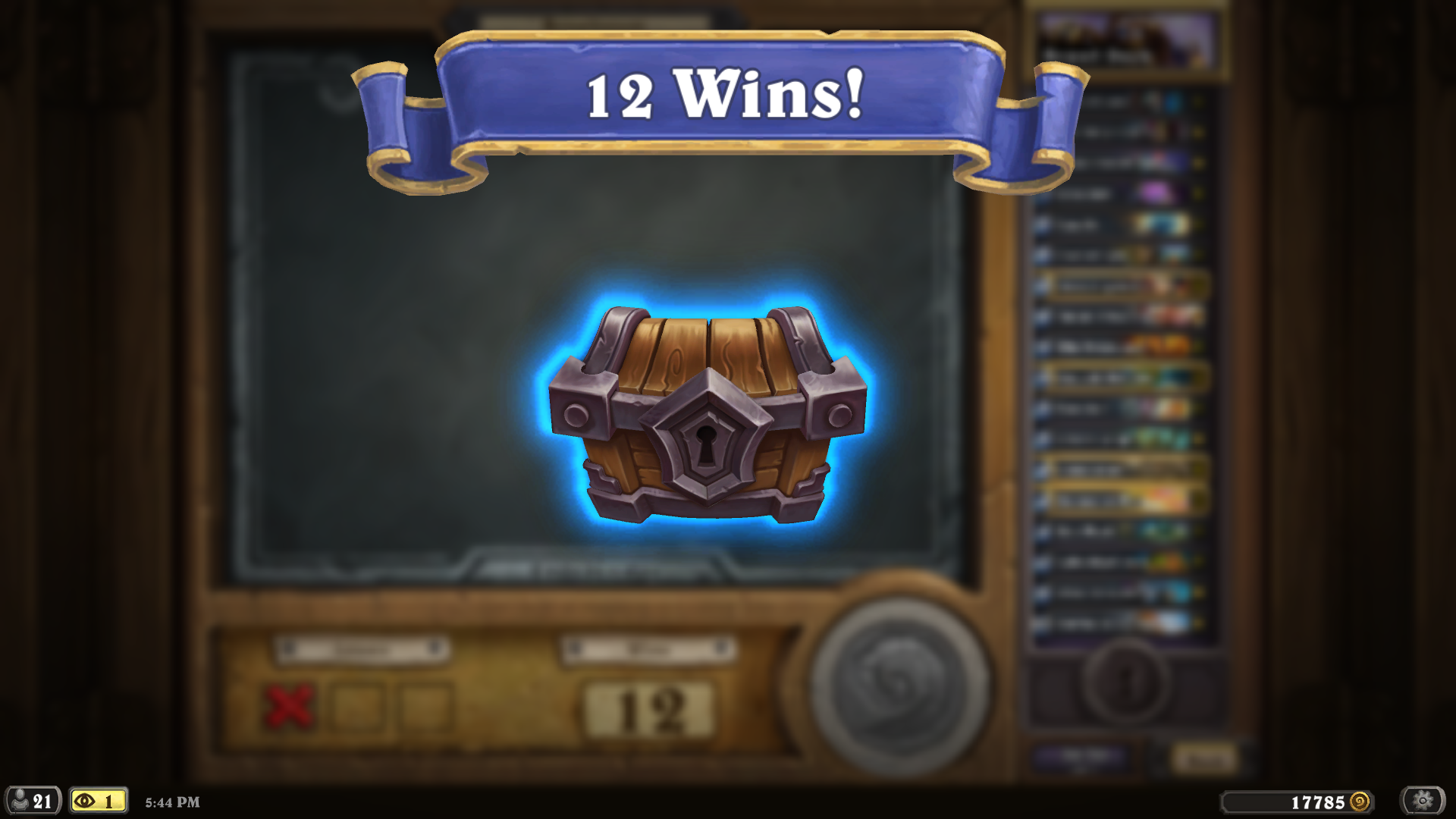 Survive until your deck is empty. Play Shirvallah, the Tiger. Baleful Banker shuffle Shirvallah. Holy Wrath on opponent's face for 25 damage. If the opponent is not dead, repeat the same process once more next turn (which makes a two-turn-kill combo).

Alternative win condition against armour heavy classes: Play Uther of the Ebon Blade. Use Baleful Banker to shuffle 2 horsemen. Use Zola the Gorgon to copy a horseman. The 3 horsemen mentioned have to be different, so you should keep track of them. Draw the shuffled 2 horsemen. Play 3 different horsemen and then use hero power to destroy your opponent. 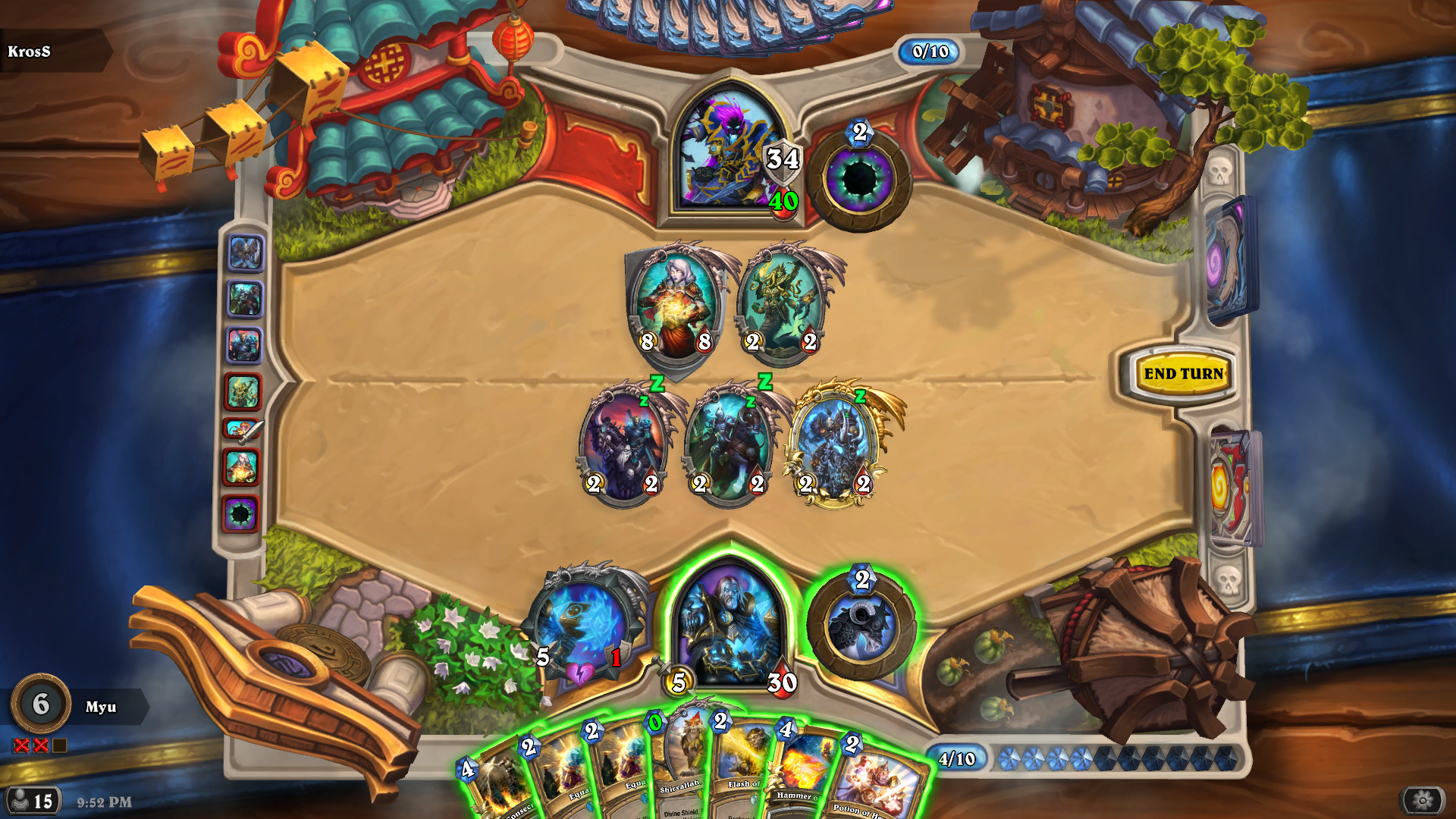 If you are missing some of the cards, consider these replacements: Potion of Heroism, Shrink Ray, Hammer of Wrath

Crystalsmith Kangor: Synergizes with Crystology and all the healings. Also works as an effective soft taunt.

Zola the Gorgon: Gives us an extra win condition. Can be used on Shirvallah, the Tiger for tempo swing and heals.

Hammer of Wrath: Board control with card draw. Can also push some damage on opponent’s face before using Holy Wrath.

Bloodmage Thalnos: Synergizes with Crystology, Consecration and Hammer of Wrath.

Uther of the Ebon Blade: Extra win condition. Great board control. Heals 20 health. We can often save 1 durability of the weapon for 5 + 25 = 30 OTK.

Druid is an exception and the above rules do not apply. Mulligan everything away except Crystology to find Uther of the Ebon Blade because it is common to have cards milled by Naturalize.

In most matchups where the opponent does not have armour, we want to focus all our attention and resources on board control because we always win if we survive. Below are the strategies against some common decks. If there is a deck archetype that I did not mention and you would like me to explain, please leave a comment.

If we only have one board clear in hand, try to save it before opponent’s turn 5. It is fine to let odd paladin play Fungalmancer or Level Up! and then clear the board on our turn 5 or turn 6. The reason is that the board means almost everything for odd paladin and we have some big heals later. Feel free to use Time Out! early on. For example, if we can play Wild Pyromancer with Equality and then hero power, we can play Spikeridged Steed on the pawn next turn. We do not have to save combo pieces. It is fine to shuffle a Wild Pyromancer with Baleful Banker.

Rogue has some solid burst damage, so we need to pay attention to our health. It is typical to use board clear on turn 5 or even turn 4. It would be favourable if we can Time Out! on turn 5 and then clear the board on turn 6. Use Spikeridged Steed on smaller minions since the opponent will play Vilespine Slayer anyway. Crystalsmith Kangor plays an important role, use him effectively. We do not have to save combo pieces.

Health really matters here. Crystalsmith Kangor is one of the most important cards in this match-up. Try to maximize Kangor's heal value. If you are going to play multiple minions, play Lynessa Sunsorrow the last. Because if the opponent plays Vanish, she dies and summons taunts. The win condition is to keep 1 durability of 5/3 Grave Vengence and hit 25 Holy Wrath for 30 OTK.

Very favourable matchup. The opponent will have two useless cards since the beginning of the game: Explosive Trap and Wandering Monster. Never attack opponent’s face when he controls secrets. Save Bloodmage Thalnos Consecration combo for Greater Emerald Spellstone. Play around Crushing Walls.

This matchup has very little mistake tolerance and games are often very close. Try to remove Scavenging Hyena as soon as possible. If we use Time Out! while there is hyena on the board, do not use hero power so we can avoid hyena getting buffed further.

Maximize equality value. It is fine to let opponent hero power and draw cards from Pyromaniac. The opponent’s resources are not our concern. Try to clear the elementals on the board before we play our combo so the opponent cannot heal after the first 25 damage.

In the first few turns decide which win condition we are aiming for. It is totally viable to cheese through the armour and win with TTK (I did it all the time before I started playing Zola the Gorgon). But I still recommend the less stressful 4 horsemen win condition because it has more tolerance for mistakes. Choose bigger minions from Stonehill Defender discover options. Play around Supercollider.

Try to draw 2 Baleful Banker and Zola the Gorgon as soon as possible. Play Uther of the Ebon Blade and try to keep all 3 durabilities of the weapon. Use Zola on a horseman. Feel free to use Shirvallah, the Tiger in mid game if desirable. Wait for the opponent to play King Togwaggle and Azalina Soulthief. Play "King's Ransom" and let opponent swap back. Use Baleful Banker to shuffle a horseman for 2 turns. Keep in mind that all 3 horsemen have to be different. After that, destroy your opponent with 4 horsemen. 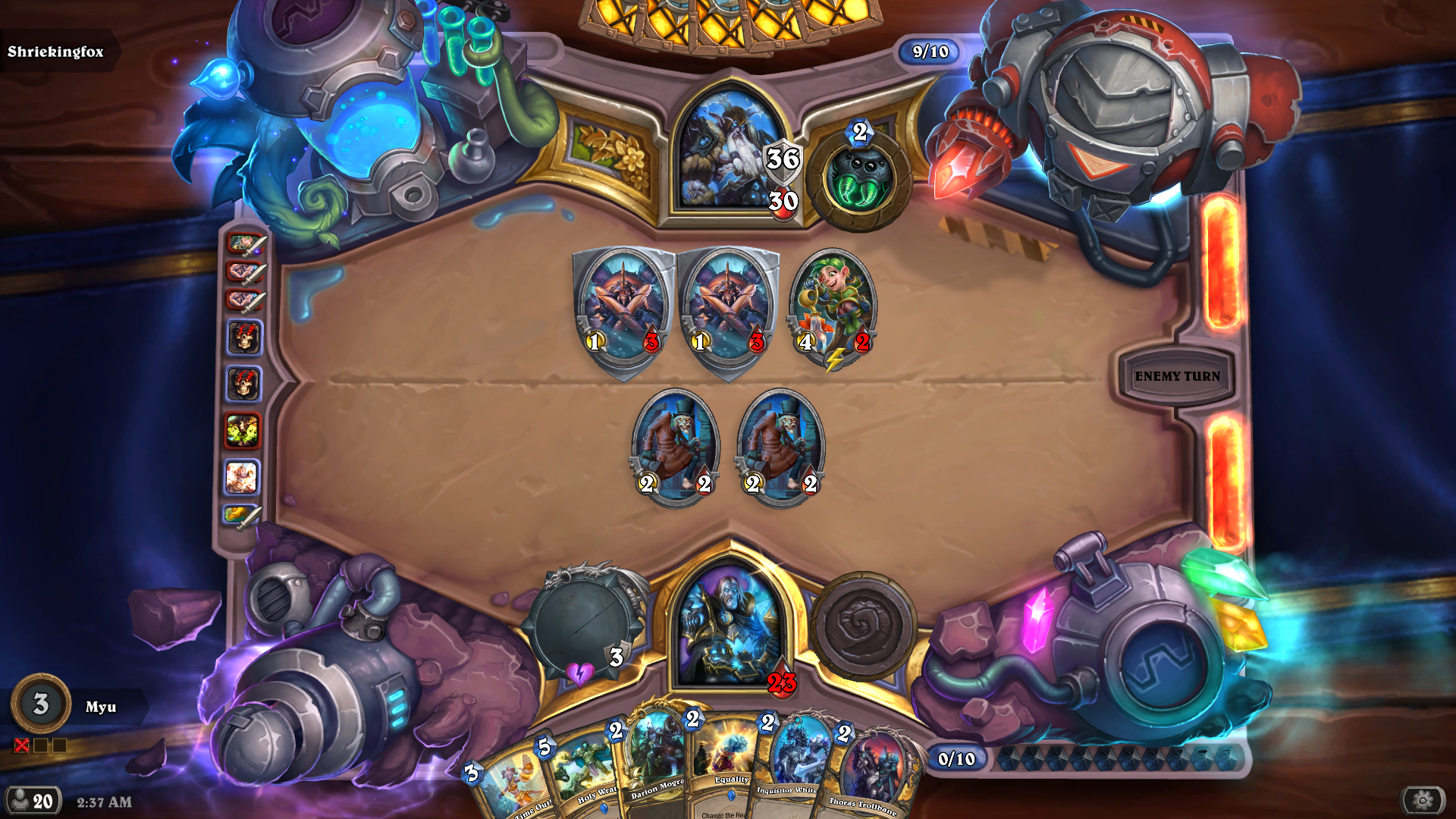