Here is my stream if you wanna watch me play: http://www.twitch.tv/zeptinn

UPDATE: This deck has now been updated for the GvG expansion, although there are a lot of card considerations right now. I will do a big write-up in a bit explaining some cards.

Thanks all for voting this deck to the frontpage of Hearthpwn, glad you guys found as much success with this deck as I did, now onto to the deck-talking part:

I've now added a full writeup of all the matchups and a mulligan guide, especially the Handlock/Warrior as that was requested.

I also wanna add, this deck was made to be used at the ranks of 3-Legend, or around there. This will probably not work aswell above that, seeing that the competition isn't the same. At rank 1, all I faced was Hunter, Warrior, Handlock, Zoo and other priests making this deck extremely viable. 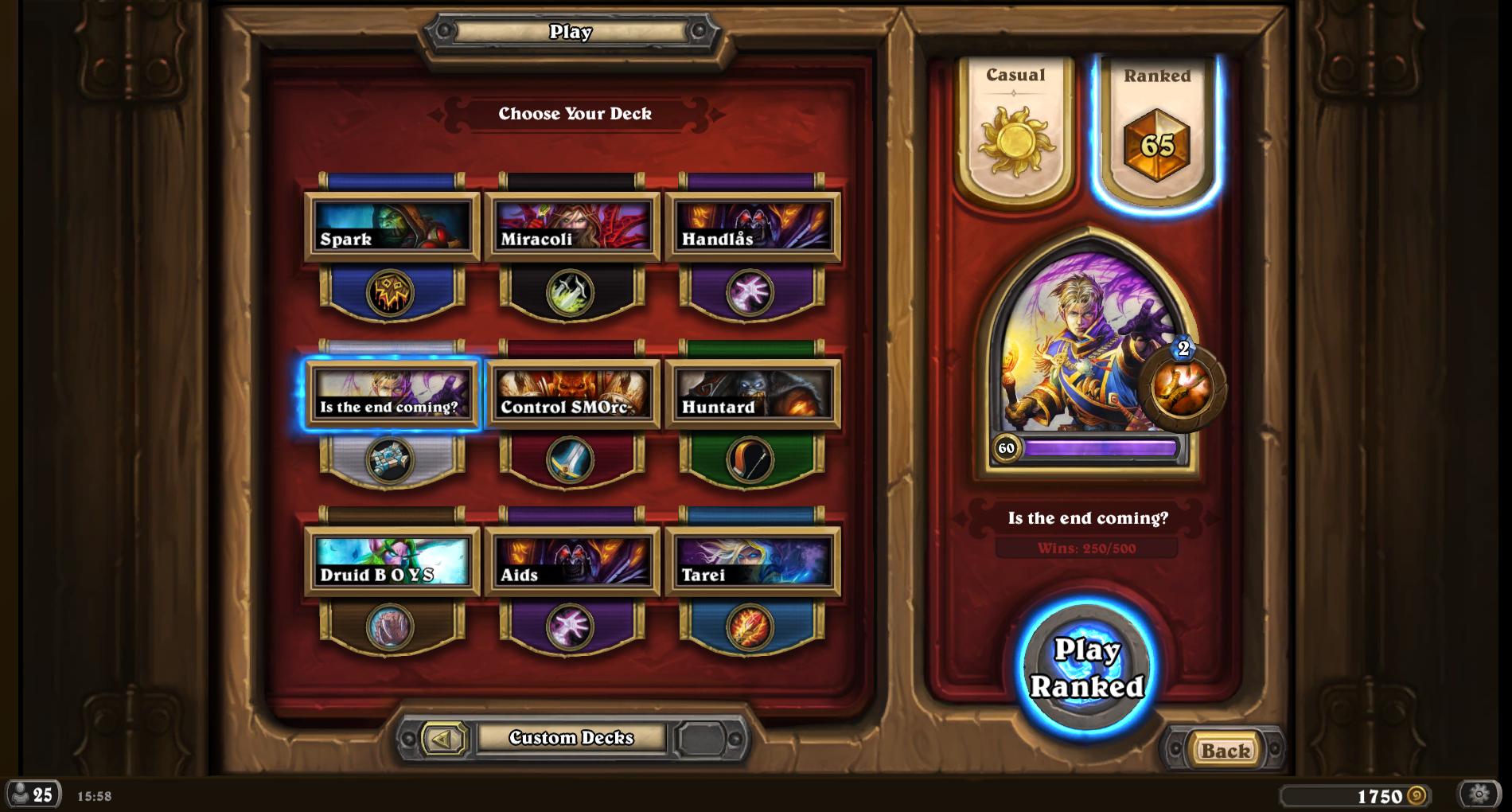 Today I went 13-4 with this deck, winning against two handlocks with this specially made deck. Pic: 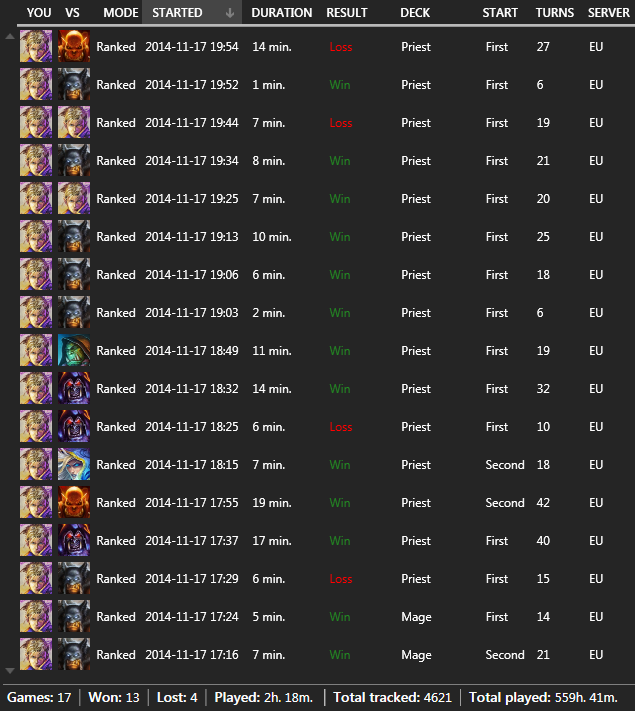 I played a bit more on ladder today (in legend) and climbed all the way to rank 155 from swindling down to 500 or so playing som fun decks. I do believe this deck is very good in high ranked games. 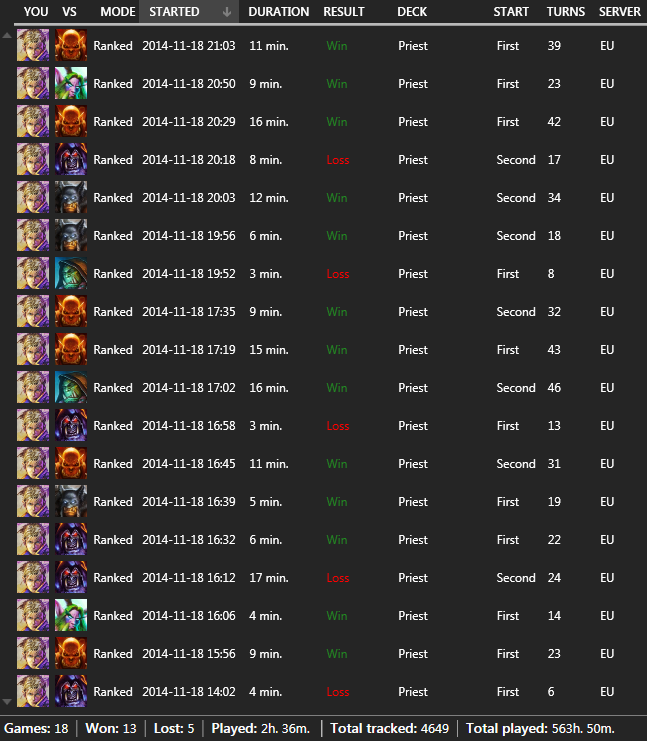 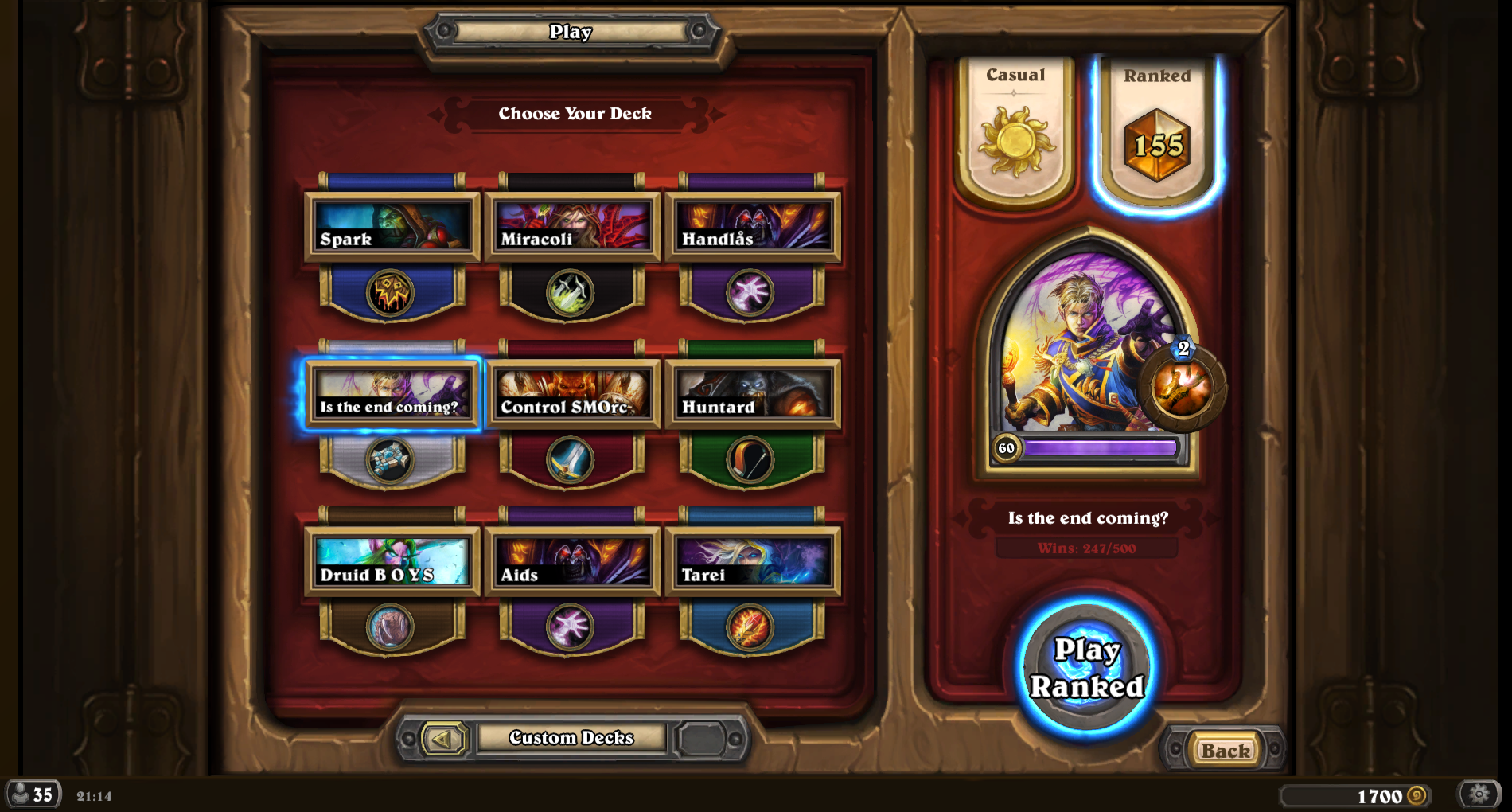 Shadow Word: Death does the exact same thing, however, in the Handlock matchup the 4/2 body is a very big deal. There was not enough targets on ladder (other than handlock) for a second SH:D so I instead added one of each, removing Thoughtsteal (also really good against handlock) to make that matchup better. Let's also not forget about warrior, who have lots and lots of targets. I've also sniped a few webspinner Hyenas getting out of control. Basically, the targets for Shadow Word: Death/Big Game Hunter were 7+ attack, making BGH far more efficient than SWD.

I generally don't write decklists, but I might start if I get some positive feedback and so on and so forth. If you have any questions, go ahead and ask away. I'll answer all serious questions, except probably why BGH is in the deck since I've already covered that in the post.

Some extra cards you could keep if you have a decent curve already is Shadow Madness, Harrison Jones and Sludge Belcher.

In this matchup it is key to attempt to clear the hunters board. Getting out an early Northshire Cleric to draw cards is really important aswell, as you need the answers in this deck in your hand. Your goal should be to early on establish board control, or just let him overextend into an Auchenai/Pyro combo. Once you've established board control you want to take whatever small minion he plays with Cabal, creating a big swing in power.

Shadow Madness helps with traps like freezing, although you need to make a read what kind of secret it is. If they trade off, leaving you with one minion it's likely freezing. If they give no kind of tells at all, but have either a direwolf alpha/knife juggler in their deck you can expect a snake trap and should be prepare to answer it with a Holy Nova / Wild Pyromancer.

Other than that, once you've established board control you should attempt to heal yourself every turn to negate the Hunters heropower, but you need to take into consideration if a heal on you or a minion is more important (to perhaps not allow him to use a 3-dmg kill command on a Sludge Belcher).

Mulligan: Thoughtsteal, Big Game Hunter, Auchenai Soulpriest/circle and perhaps Injured Blademaster/Circle, Shadow Word: Death and Silence. Power Word: Shield can also be good to buff your minions out of Twilight Drake range and draw cards using Cleric. You do have a few turns to draw some cards, so most of the time you can get lucky and draw what you need.

What you should attempt to do is try and draw into your efficient answers. Playing an early cleric knowing you have big minions that could potentially draw you cards is perfectly fine. Of course key cards like Wild Pyromancer+Silence, SWD and BGH will help make this matchup a lot better. Playing a Sludge Belcher turn five, following it up with Loatheb just to use both minions to trade with a giant is perfectly fine due to how important and dangerous the giants to let the Handlock keep. Winning this matchup is a lot about getting a good thoughtsteal and efficient answers. Try and stall the game, find an Auchenai Soulpriest/Combo to try and get a big boardclear. If you're lucky you can get Auchenai Soulpriest and two combos, and if you do just go full face and bait out the double molten giants etc, but you should take into consideration that he could use Defender of Argus, buffing them out of double circle range. So keep track of if he's used/discarded both Defender of Argus and is going to probably use a Sunfury Protector.
You will probably use up a lot of cards to try and clear the board, once they play Lord Jaraxxus you need to have Harrison Jones ready so that you can regain Tempo and swing the game around. Holy Fire will be very good to finish your opponent off, but it's perfectly fine to use on minions to clear early on.

Also, the Cabal Shadowpriests don't get a whole lot of value in this matchup, so it's perfectly fine to take an Owl, or if you're lucky an argus/sunfury.

Great cards to keep if you already have a good hand are Harrison Jones, Sludge Belcher and Loatheb.

In this matchup you can play the early game in two ways, just play your Northshire Cleric/Injured Blademaster/Wild Pyromancer early on and not dodge the weapons, or you can hold them for later to get more value. I always pick the second option, unless I have PWS in my hand. Dark Cultist is great early on because if you coin him out, the warrior will not be able to deal with him except Hero Power and Shield Slam, however that's pretty good for you. If you do get blademasters, just hold them and wait till turn 5 where you can heal them and get them out of Death's Bite range.

A keypoint in this matchup is to use your cabal shadowpriests, you'll be trying to get them onto their Armorsmiths however, if they have very few cards, taking a newly played Acolyte of Pain is perfectly fine. You win this matchup by taking the warriors minions, and by very efficiently removing their big minions and healing out of Grommash Hellscream range (or taunting up). Try and draw as many cards as you can so you get the answers you need.

Thoughtsteal in this matchup might be one of the best cards, because you can steal very good cards that can win you the entire control game. Ysera, Ragnaros, Execute, Shield Slam (taking an armorsmith to gain armor), or Brawl are just a few of them, and even weapons are really good aswell.

Save mindcontrol for Ysera unless you absolutely have to use it, take into consideration that if you MC an 8/8 (Ragnaros or Alexstrazsa) they can Faceless Manipulator + BGH which is fairly common and can be a big swing in the warriors favor.

Great cards to keep if you already have a good hand is Cabal Shadowpriest, Loatheb, Sludge Belcher and Shadow Madness

What is full northshire? Playing two Northshire Clerics on the board. No other class can force you to draw cards as easily as another priest. Playing two clerics can allow the other priest to make you draw an insane amount of cards, burning a lot and go to fatigue extremely quickly. You must NEVER play two clerics at the same time in the mirror match.

This matchup is a lot about getting early boardcontrol, so coining out Dark Cultist/Injured Blademaster is really good. There is no way for priests to deal with a 4 attack minion turn 1-3 so the blademaster will always survive, allowing you to heal it up and trade efficiently next turn. Always try and dodge the enemy priest' Dark Cultist buff, basically killing every other minion first and lastly killing the cultist to avoid buffing. You always want to keep Auchenai Soulpriest/Combo for when you really need it, in this matchup it is pretty key. Someone is going to get the early boardcontrol, and after that the other priest is basically kinda screwed without the combo/Sylvanas Windrunner. Now onto Sylvanas Windrunner, she is the KEY card in this matchup. If you get early boardcontrol you're already looking great, but if you happen to end up on the losing end Sylvanas is going to make losing games winnable (unless she gets silenced). Never waste Sylvanas as she can be used to turn around the whole game, and with the Sylvanas + SWD on your own Sylvanas you get an extra 9 mana mindcontrol.

Always think about the other priests Auchenai Soulpriest combo, and how it would affect your board. If you lose because of it, make your plays around it unless you know they can't have it.

Holy Nova here can be a great card, but could also be a waste of a card. Don't be afraid to use it to kill a X/1-2 minion and healing up maybe one or two of your own creatures, that's enough value. You always need to keep in mind what would happen if the other priest played Ysera. Do you have an answer? If no, you need to perhaps play more creatures on the board to be able to answer her. If you have MC she is the best target, as she can make or break this matchup aswell (Ysera Awakens).

I wanna reiterate that this matchup is a lot about fatigue. Sure, drawing cards is really good but the priest matchup has so many clears and answers, that you're not looking to rush them down, especially with the heals they also can have. Plan for a long game and make your plays accordingly. Silence should ALWAYS be kept for your opponents Sylvanas, reason why has already been said.

Now onto the last part, Clerics. Sure, stealing a cleric with cabal can be good, but you need to think about how much it could damage you to draw cards. I almost always trade my Cleric once I've drawn 3-4 cards just to prevent any kind of forced draw from my opponent. Using a pyro + spell + circle early on with a Cleric on the board can make you draw 3-4 cards and that is actually really good. Early on you need answers so drawing cards is key, however, mid and lategame you should really be trying to avoid drawing too many cards once again. This matchup is very difficult to explain, it takes a lot of experience with priest to know what you can do and what your opponent can do, so it should just come with time. Also, try not to allow your opponent for an amazing Shadow Madness and don't buff <2/X minions' health as they can be taken by the other priest.

Here is the VoD of me getting legend with this deck, defeating Zetalot (one of the best priest players) as the final boss:

Sound is unfortunately muted, so you can't fully hear my reasonings. However, I'm streaming basically everyday, so if you drop a follow it's very likely that you'll see me play this deck live.