- Versus Faster decks - Defile, Hellfire, Doomsayer/Stonehill Defender/Kobold Librarian/Possessed Lackey; going second - Lesser Amethyst Spellstone or a 5-drop, but only if you have AoE;

- Versus Faster decks - killing their stuff, gaining board control, stabilization;

- Versus Control - Playing the attrition game (aka using the removals as best as possible, also finding Bloodreaver Gul'dan and destroying the opponent's deck with Rin, the First Disciple).

- Versus Combo (aka Druid decks) - May RNGeesus have mercy upon your soul. That or find Rin, the First Disciple ASAP and hope for a good outcome out of the Gnomeferatus.

In either case control - odd, but it's also possible that you can encounter quest decks.

Normally they don't run silence, but I got punished by a certain player and lost my Rin-condition because of it. Anyway, this is a super favourable MU. Just play Rin and win.

If you somehow face taunt warr - then just save your healing for when you will really need it. If you manage to find the DK early, you can heal yourself by a great amount. The healing will be needed against their HP.

Mid-range, Spell hunter or Deathrattle. Nothing much to say - treat them as aggro decks. Clear, stall and play the DK.

For Deathrattle hunter - use the Ironbeak Owl on their valuable deathrattle minions and deny them getting a lot of value.

>75% odd paladin - aka aggro deck aka just look at the mulligan above. Sometimes I save my Defile/Hellfire until turn 5, because their 1/1s don't do a lot of damage before that.

<25% control mech - mulligan for the aggro MUs first. Use a silence on their eggs - at best after being buffed.

< 1% Even - aka aggro aka just look at the mulligan and the strategy above. Beware of Sunkeeper Tarim.

Mostly Odd - aka aggro deck aka just look at the mulligan above.

Unlike other aggro decks, Defile isn't activated easy. I prefer to look for Doomsayers/Hellfire and single-target removals for their 3-drops, because these are the most annoying ones.

Deathrattle or Burgle Rogue - rare cases. They can also be treated as aggressive ones. Find your removals and win. In the case of Burgle - if the opponent doesn't pressure you, tap a lot, find the DK and then Rin and win.

Rare MU. Either shudder (win-rate depends on your draws) or even (super favourable).

Keep Rin, the First Disciple, Gnomeferatus and a Defile/Hellfire/Doomsayer just in case.


Inflict max pressure on the opponent's face, if they don't play aggro. Shaman's draws are typically bad and if you silence their Acolyte of Pain, you will make their day miserable.

I have faced some big and taunt druids in this brawl.

If this is one of the decks your opponent is playing, you are fucked. Hope that Gnomeferatu kills something good. Play Rin, the First Disciple ASAP. Don't allow them to mill your cards with Naturalize.

1) Mostly zoo - aka aggro aka look at the mulligan above.

3) Even - aka aggro aka see the info for the most popular warlock deck.

Mage (depends on the opponent's deck)

Tempo - Bad MU. Mulligan for this deck first. Play around the secrets, play Doomsayers and hope your draws are better than theirs. I would look for a Shadow Bolt just to kill an annoying minion. Avoid tapping.

Big Spell Mage - favourable MU. Normally the mages will prepare for zoo. Tap a lot, play Rin, the First Disciple and Dark Pact before they play their Skulking Geist.

I only faced 4 priest decks - Spiteful and control and combo. Imho control will be the most common case, so yeah, you know the drill. Beware of their Mind Control.

Resume for the different MUs:

Good against - every minion-centered aggro deck. Also control ones, if you find Rin, the First Disciple and Bloodreaver Gul'dan early.

Proof for the highest score 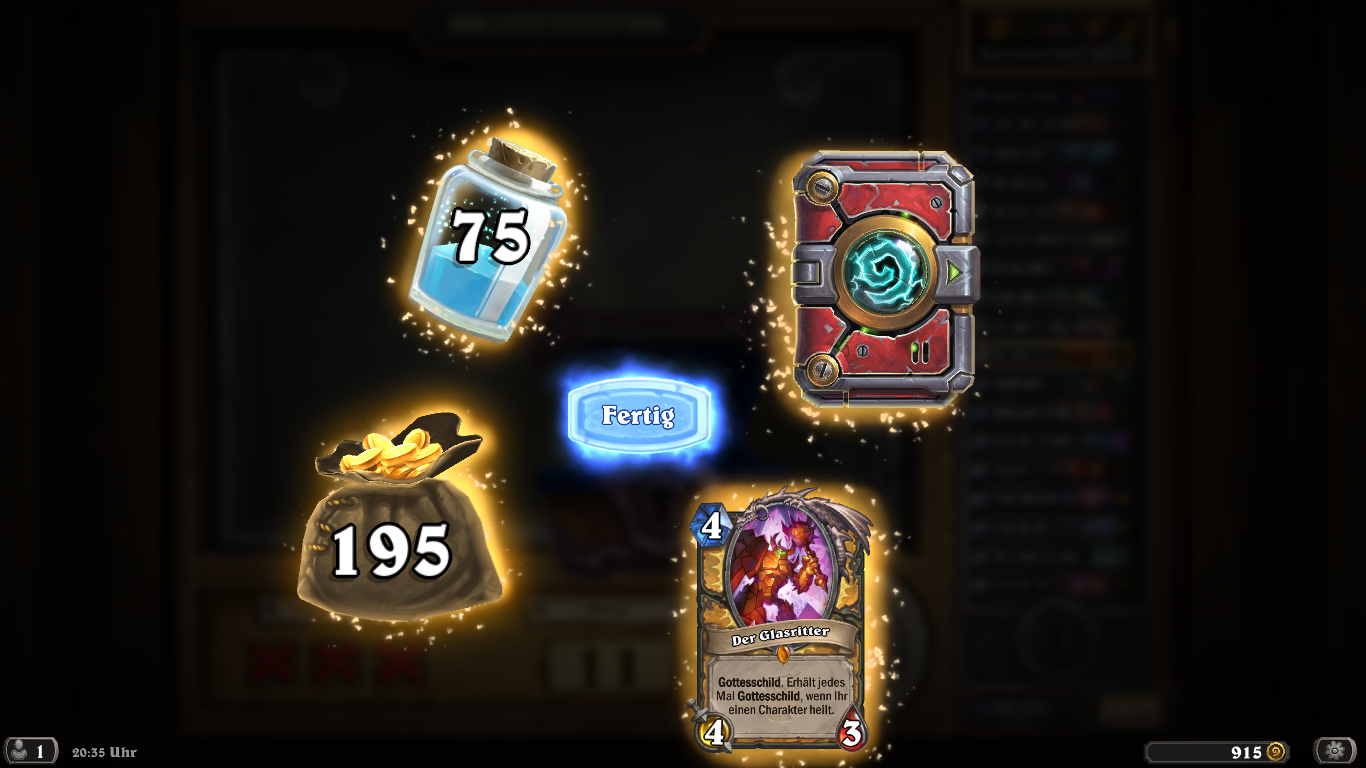 If you look at the background, you will see the 11 wins behind The Glass Knight. I could have made more screenshots regarding my previous runs, but I didn't think this was necessary. The match history is your proof for those games.

Ok, so with the very first version of this deck I went 8-3. It featured 2 Demonic Projects, Gluttonous Ooze and 2x Possessed Lackeys instead of Gnomeferatus, the second copy of Rotten Applebaum and Shadow Bolt.

My matches were the following ones:

2nd, 3rd and 4th run: I used 2 Spellbreakers, 2x Possessed Lackeys and a Demonic Project instead of an Ironbeak Owl and the aforementioned Gnomeferatus and Shadow Bolt. My matches went the following way:

1) zoo - win.
2) spell hunter - win.
3) elemental mage - win.
4) even shaman - win.
5) big druid - loss. My opponent even ran Spreading Plague and the DK in addition to their Hadronox. I lost because I gave them a Void Ripper from Demonic Project and Rin was literally the last card.
6) odd control mech rush warrior - win. It was the same guy I faced on my 3rd turn.
7) mid-range hunter - win.
8) control warlock - win. He project me twice after I got Azari, but he missed. My opponent played the Skull earlier and it pulled out their own Azari. So yeah, the skull can be a double edged sword.
9) odd mech warrior - loss. Normally warriors don't run silence, but this one did. I misplayed by not killing my own Rin and I got punished from it.
10) big druid - loss.

5th run with 2x Possessed Lackeys instead of a Shadow Bolt. I went 10-3 with this one.

1) odd rogue - win.
2) shudder shaman - win. Gnomeferatu killed their Grumble on turn 2.
3) shudder shaman (a different opponent) - win. Rin carried a lot.
4) control warlock - win.
5) deathrattle hunter - win.
6) odd rogue - win.
7) deathrattle control priest - loss. DK and Rin were in the last 7-5 cards of my deck.
8) deathrattle hunter - loss. DK was literally the last card. I managed to play it but it was too late.
9) zoo - win.
10) zoo - win.
11) odd rogue - win.
12) big spell mage - win.
13) odd rogue - loss. I think I also made a small mistake somewhere. At one point we were both on top-deck mode. I was very low on health (2 hp), but I managed to play a stonehill, followed by a stonehill and then saronite chaingang to stop his buffed Edwin. But my opponent was holding on an SI 7 and they killed me on the following turn.

6th run (11-3). I still kept the two lackeys, but I replaced a Rotten Applebaum for a Shadow Bolt.

7th and final run. I went 9-3, but I didn't use the current list. I removed the Gnomeferatus and the second Rotten Applebaum for a Demonic Project, Shadow Bolt and a Siphon Soul. I was kinda salty that I lost to that combo druid, but the Demonic Project wasn't helpful at all.

1) Hunter (new player) - win. I'm not heartless. I am soulless.
2) Hunter (another new player) - win... No comment.
3) Shudderwock evolve shaman - win.
4) Spell hunter - win.
5) Zoo - win.
6) Deathrattle rogue - win.
7) Control warlock - loss. (They played their Rin faster, I didn't have a silence for her and my project whiffed).
8) Combo Priest - win.
9) Evenlock - win.
10) Odd rogue - loss. (Due to a mistake. I was actually wondering what's the best play, but I got wrecked by the Blood Knight after I giggle-d my opponent)
11) Deathrattle hunter - win.
12) Even paladin - loss. (Maybe I have made a mistake somewhere, but my draws were really bad. In the mulligan stage I got a voidlord at the end and my first draw was the second voidlord followed by a lackey, lord godfrey, a pact and the second lackey)

So there you have it, Leute. Even though I didn't get 12 wins, I'm very proud of this deck. Control warlock is a viable option since it counters the majority of decks hard (aggro) and it has options to deal with other control decks as well. I definitely recommend this arch-type. If you feel like it, you can also make some changes and add tech cards of your own desire.

- 2x Demonic Projects and Gluttonous Ooze -  I made the deck so, because I thought I would encounter many aggro and combo decks just like I do on the ladder. The experience was different, that's why I cut these cards.

- 2x Spellbreakers - In my first runs I faced a lot of buff decks. Having 2 of these right now feels superfluous, I removed the second copy and replaced the first one with an Ironbeak Owl. Although the latter one has crappy stats, this is more attractive because it's cheaper and I can combo it with Defile and Lord Godfrey.

- Shadow Bolt - I want to have a better win-rate against tempo decks. But if you think that this is superfluous, add a Siphon Soul instead.

Riveas  and ULTRAlol666 proposed adding a Siphon Soul and The Lich King. This will be a great way to deal with other control decks. I personally prefer having only Rin, the First Disciple, because she is cheaper and I have activators for her.

- Gnomeferatu - early-game minions and these can potentially destroy valuable cards from your opponent's deck. Giving you a card advantage and accelerating their fatigue.

Big thanks to Daka and to all of you, who gave me advice on how to improve this deck. You are awesome.

Thanks for your time and for the feedback as well.