Hi all, this is a legendary capable (60%+ winrate in legend) midrange paladin deck that I've created.

This deck has peaked at Rank 39 in Legend on NA 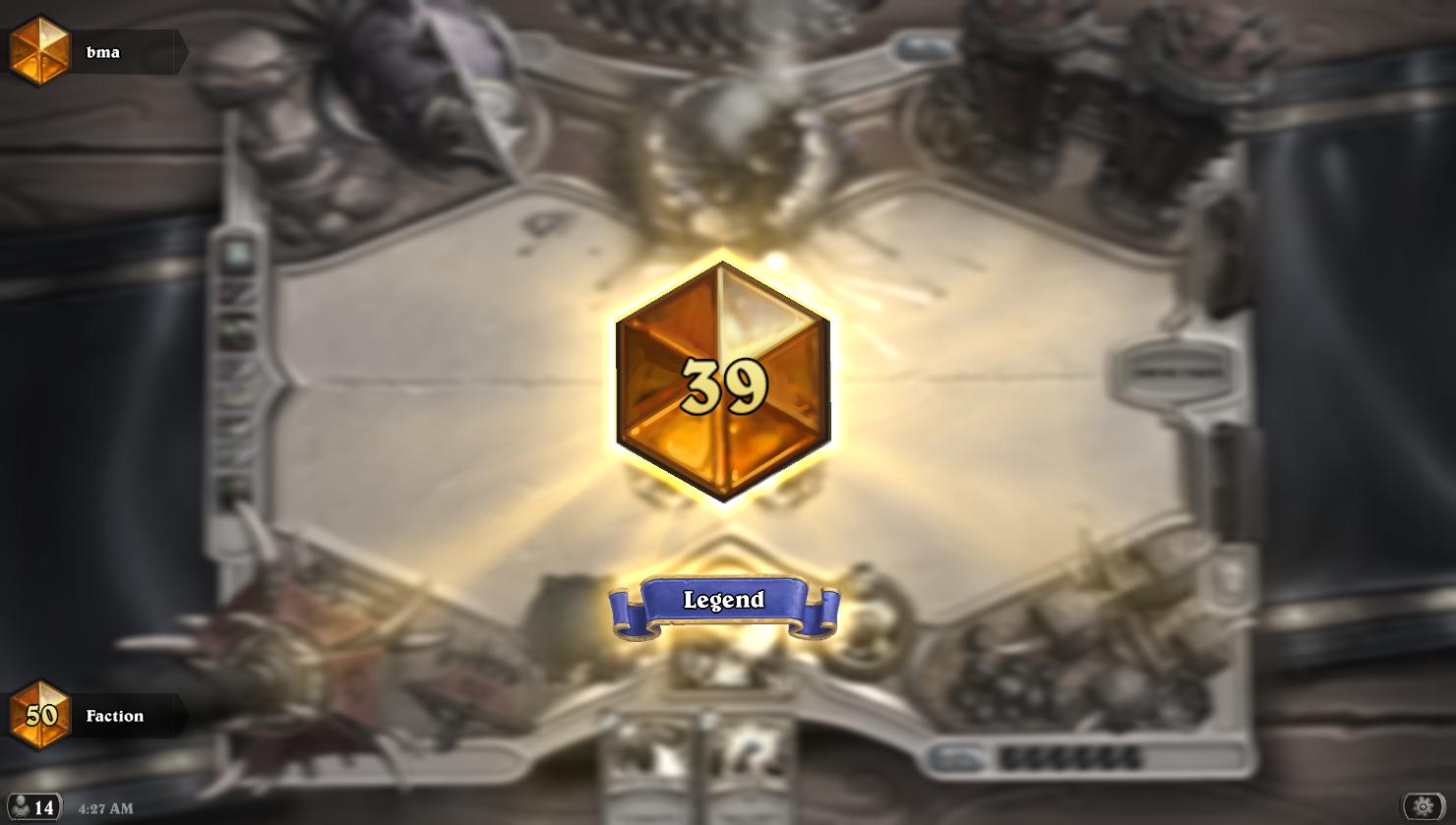 While it has aggro elements, this deck can easily compete with control or midrange decks in longer games and it does have 4 5+ drops, so I'm not very inclined to call it an aggro deck.  It's also using some cards you typically only see in control, such as Aldor Peacekeeper and Tirion.  A typical game will be early board control into a 3+ draw divine favor into more board control into a win.

With only 1 drop deathrattle, explosive coin undertaker starts are a rarity.  They're nice when you get them, but this deck is hardly built around the undertaker opening and is perfectly capable of winning games without it, even if your opponent gets one themselves.

"Questionable" card choice explanations:
Why only 1 Equality?
Equality is a dead card very often, and it's in here mostly as a comeback mechanic and for the handlock matchup, where you hold it for their big taunt turns.  This deck isn't forced into bad trades often, but on the odd occassion you are, it can be nice to have an equality around.  Also nice when people play a rag against you or something like that.

Why Harrison Jones?
He's just good right now, especially against Shaman.  If you don't have him, swap him for an argent protector.

I disenchanted my Leeroy and I felt like I needed something that can go to the face, but with some utility.  Avenging Wrath fits the bill.  I think this slot is perfectly interchangable with Leeroy or perhaps Arcane Golem, but Avenging Wrath has been giving me solid results so far.

Why the lack of 4 drops?

Turn 4 is indeed an awkward turn for this deck when you don't draw truesilver or you can't get good argus value.  However, I haven't found it to be much of an issue so far.

Owl is soooooooooooo insanely good right now, why not 2 owls?  Silence is always useful with the deathrattle heavy naxx expansion and the body trades with a lot of the things you'll be silencing, such as mad scientists, undertakers etc.  Just a very good card right now and I wouldn't drop the owls for anything.

MULLIGAN:
Pretty much always Mulligan for Undertaker if possible, but not TOO aggressively.  Keep Your 1 and 2 drops, keep harvest golem if you plan to coin it, etc, don't dump them all JUST for undertaker.  You don't need him to win!

This matchup is in your favor, though you can never count hunters out since there's a lot of rng involved in their games, with 4 1 drops to buff undertaker.  Trade in the early turns, but once the traps are out, avoid triggering snake trap unless you can consecrate in the same turn.  Try to save an owl if possible because most hunters will try to use a belcher to force you to trigger snake trap, but it's also perfectly fine to owl an undertaker or a mad scientist early on if you have to.  If you get the cards you need, it's a pretty good matchup for you.  Be wary of cult master unleash the hounds and try to play around it if possible.

You'll usually want to take it slow against Control Warriors, as you can easily compete in the lategame against them, there's no need to overcommit to the board and eat a game ending brawl.  Test the waters early for fiery war axe, cruel taskmaster etc and try not to feed high value minions like knife juggler into an axe.  You'll easily be controlling the board early on and should aim to use your hero power every turn.  Your primary aim is to force the warrior into a bad brawl where all he kills is a bunch of hero power tokens and deathrattle minions, and then play out your entire hand immediately.  Divine favor at any point you have the board and you can draw at least 2 from it.  Try to save an Aldor Peacekeeper for Grommash if possible.

Losses to control warrior typically occur due to not drawing divine favor, or them having a godly early draw (ie: fiery war axe into cruel taskmaster into double deaths bite.)  However even with a godly warrior draw, you can still win with enough divine favor value.

Shaman (all of them) is a pretty easy matchup.  The games are generally quite long and you will usually get a chance to Harrison Jones a Doomhammer which is usually going to be instant win.  Don't overcommit to the board, play around lightning storm as much as possible, and just get good value from your trades.  Be wary if you see zombie chows early as this usually indicates a sea giant deck - save your peacekeepers for high value targets like Loatheb, Fire Elementals or Sea Giants vs this variant of shaman.

Haven't played against many of these, but every match against them so far has been similar: they control the board for the first 3 turns, then truesilver comes out and gets huge value and everything swings back your way.  Just don't give them a massive flamestrike as that's usually going to be their only way back into the game once you get things under control.  Play around secrets, always check for mirror etc - it might suck to have to play a loot hoarder as your turn 5 play, but it's better than giving the mage a Belcher.

This is a tough matchup.  This deck simply isn't fast enough to kill miracle rogue early, and doesn't have enough reach to finish it off once miracle inevitably takes the board past turn 6+.  You can still win with a good draw and sometimes with some luck (ie: avenging wrath on a concealed auctioneer,) but the games are pretty much out of your control.  You have to hope the rogue gets a bad draw or misplays.  Basically, you're playing against a miracle rogue.  Don't fret these games too much, there's usually nothing you could have done better if you lose.

This matchup is pretty tough.  I've only ran into 4 of them, and went 2-2, so I'm inclined to say it's an even matchup.  We don't have many attack buffers or spells in this deck, so being forced to trade inefficiently with an endless barrage of taunts can take its toll.  Kill them before they get the mana to play more than 1 minion in a turn, or you're probably screwed.

You're slightly favored in this matchup.  Play around swipe, protect your deathrattles. (ie: If something has 1hp, kill it with your leper gnome and not your haunted creeper.)  Don't be afraid to blow equality on early innervate plays.  Druid has a lot of trouble playing from behind, so if you don't hand them a massive value swipe and you don't draw dead in the early game, you should win this matchup more often than not.

This matchup definitely favors the priest.  They get massive value out of cabal shadowpriests and shadow madness, they run zombie chow so their early game is typically stronger, and run plenty of aoe.  You want to play this matchup like an aggro deck because unlike the control warrior matchup, you simply can't compete with priest in long games.  Usually you will lose the board early, take it back with truesilver or a consecrate, and then try to close it out within the next 4 or 5 turns or lose.

Control priest is easier, as they won't be competing with you on the board early game.  They'll typically be shooting for wild pyro or auchenai circle value, so try to play around aoe as much as possible.  This matchup is a lot like the control warrior matchup.  Try to get massive divine favor value and run them out of board clears by hero powering as often as possible.  Play around the turn 5 (coin) or 6 cabal shadowpriest as much as possible (ie: argus, killing off high value minions like harvest golems, etc).  Still, it's not in your favor.

This matchup favors you slightly, as you have 2 owls to answer drakes and 2 peacekeepers to answer giants.  They can still win however if you give them a molten giant without equality in your hand, so be wary.  Play around hellfire and shadowflame, take it slow, make trades, but not too slow as you don't want them to get a jaraxxus off.  Even Harrison Jones can't save you from 6/6 infernals every turn.

Zoo has far more 1 drops than you and will typically easily control the board from the beginning.  You'll need to get a good consecrate off, get lucky knife juggles or get nice truesilver value to retake the board from them.  While it's a bad matchup, it's not hopeless or anything, and zoo isn't very common at higher ranks.

Control Paladin typically sits around with a massive hand for 6+ turns, practically gifting you the biggest divine favors you'll ever get (handlock gives you big ones too, but handlock is a much faster deck than control paladin, so you sometimes don't get the chance to use it.)  Don't overcommit to the board, divine favor for huge value, and save an owl for Tirion.  Pretty easy matchup for you, though if they draw say, 2 consecrates and 2 wild pyro equalities in their first 15 cards, they can get wins in.

If you've got any questions or comments feel free to ask here or on my stream at http://twitch.tv/faction60 ! Good luck!