This is NOT my deck. This is a deck by Evident I copied from Hearthstone Top Decks for convenience. All credit goes to them. Here is the description from link:

Our Budget Combo Dragon Priest deck list guide for the The Witchwood expansion will teach you how to play this Combo Priest list. This Budget Dragon Priest guide includes Mulligans, Gameplay Strategy, Card Substitutions, and Combos/Synergies!

Combo Dragon Priest got pretty popular in the Kobolds and Catacomb meta. While we had seen Silence versions of Priest that operated under a similar principal, we had not seen the archetype reach the heights it had towards the end of the Year of the Mammoth.

Check out Hearthstone Budget Decks & Guides for All 9 Classes!

While Priest lost what might be the strongest Dragon cards of all-time in Drakonid Operative, it still has access to probably the SECOND strongest Dragon card of all-time with Duskbreaker. This card alone can help carry you against most aggressive decks due to its ability to sweep boards with ease. The Witchwood has brought some interesting new additions to Dragon Priest decks. Nightscale Matriarch makes for a powerful late game card that can fill up your board with Whelps, and Wyrmguard gives you a strong late game taunt to help finish games or act as a target for your Divine Spirit + Inner Fire combo!

The best cards you can get in your early mulligan are Northshire Cleric, Radiant Elemental, and Power Word: Shield. If you have one of these minions, you can keep some of your higher cost ones like Shadow Ascendant, Tar Creeper, or Duskbreaker (particularly if you know it’s a board flood deck). If you have Radiant and Shield you can also keep Divine Spirit or Inner Fire (probably better because you can play the same turn as you Shield) which can win you the game if your opponent can’t deal with it. 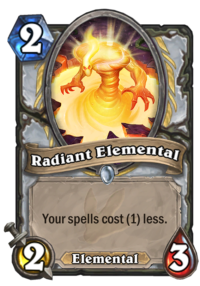 This deck can be a bit difficult to play, but when it gets going and you get used to it you can do quite a few crazy things. Your minions are of the absolute importance and should generally always be healed instead of your own face. It is vital that you keep them alive because there isn’t a whole lot of AOE removal in this deck. You’ve got Duskbreaker, and you’ve got Spirit Lash which can provide a bit of extra damage to the board.

Radiant Elemental and Power Word: Shield is one of your best early game starters. If you can follow this up with a Tar Creeper to protect the Elemental you will be in a really good spot.

Unfortunately, sometimes you just have to throw down your Northshire Cleric and hope that they can’t kill it. You won’t always get a draw, but maintaining some semblance of a board is very important. This is especially the case against aggressive decks, but ones that play 1-Health minions will have to alter their strategy or give you a free draw generally. 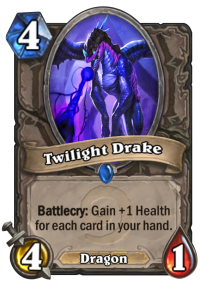 Your main targets for buffs are obviously going to be your bigger health minions. This doesn’t just mean Tar Creeper, Twilight Drake, and your other Dragons. However, you can also buff your minions with your Shield and Shadow Ascendant. The one card you need to be particularly careful with is Inner Fire. You should only really use it when you are going to get an attack from the minion, or you know for sure the minion isn’t going to die the next turn. If it’s early against an aggressive or midrange class that doesn’t run cheap removal like Druid, Hunter, Paladin, or Rogue you can be more aggressive with it. However, even spell-casting classes can be taken advantage of if you time it right. Warlock can’t remove big minions early in the game, and Mage’s would struggle with stuff above 6 or 7-Health.

Speaking of buffs, you shouldn’t always be holding on for the Inner Fire and Divine Spirit combo. Just getting something like a 6/6 early in the game is enough to put a ton of pressure on your opponent. You are at the mercy of your draws, and until you can get Shadow Visions this deck isn’t always going to be consistent.

This being the Dragon version, however, means you aren’t fully reliant on your combo to win games. You have late game power with Bone Drake, Nightscale Matriarch, and Wyrmguard. You can just beat your opponent out via the board and your healing of your minions, so don’t always feel like you are reliant on the combo.

This deck converts quite nicely into the meta version of Combo Dragon Priest! You are only really missing the following Epic cards:

If you have these then you might want to slot them into the deck, but because this doesn’t evolve into a meta deck I’m not recommending you craft any of these unless you think you’ll use them in another list.