Hey Hearthpwn, it is Theo here once again with a guide!

You might remember me from my #1 Legend Mind Blast Priest guide, and I hit #1 Legend again on EU with a unique deck. I thought I would share it so you can have all the fun as well! This deck allows you to play King Krush competitively, which by itself is already great, and it doesn’t play like any other Hunter deck. So if you want to play Hunter in a different way than the usual aggressive way, this is the deck for you! You can follow me on my Twitch channel if you want to see me play this and other decks in the highest legend ranks. 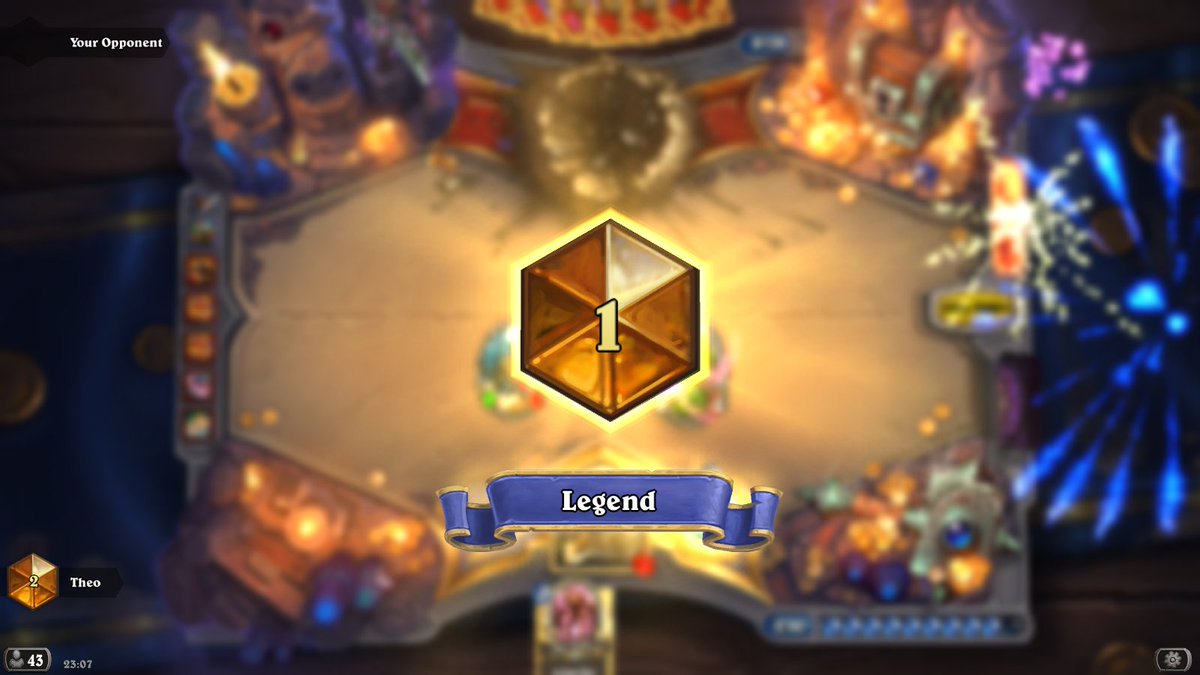 Unlike most other hunter decks, this is not a deck where you are trying to kill your opponent quickly. Early game you are kind of playing like a control deck. You want to survive until turn 6+ so you can recruit your big threats or just play hem. This means the early game is almost always about tempo. You don’t care too much about card value early on as the early game cards are basically only in the deck to survive until the later turns. If you get to your big minions you are generally in a good spot so playing a lone champion, even if you have other minions, is often correct to not waste 3 mana on a hero power. Talking about your hero power, it is pretty useless so if you for example play turn 1 Fire Fly, it is better to turn 2 play Flame Elemental since getting an extra minion on board helps you a lot more than 2 damage which is most of the time irrelevant.

During the midgame you want to set up your recruit minions in the best way. On turn 6 you obviously want to play the Seeping Oozeling, but sometimes you want to wait, especially if you have Play Dead and you think your opponent will clear your Oozeling or Silence it, leaving you with a useless card in hand until you find another deathrattle. Also often it is important to keep track of which recruitable minions are left in your deck. If you for example only have Charged Devilsaur left as 8-drop and you have both a Silver Vanguard and Kathrena Winterwisp on board, you need to kill off your Vanguard first so Kathrena doesn’t pull your only 8-drop and leaving your Vanguard useless.

Lategame you are most of the time trying to kill your opponents. This deck has of course quite a few big minions, but after that only Deathstalker Rexxar remains in terms of threats since the rest of the deck is mostly defensive minions. That means that you often want to put the most damage on board, unless they of course can counter it with AoE, and find ways to win the game quickly. This is important especially versus decks that have an unbeatable lategame such as Taunt Druid or Shudderwock Shaman.

Since the meta is so diverse, I’ll try to cover most of the popular archetypes and give some short advice in those matchups.

This matchup is pretty hard, as we don’t run a lot of AoE. Fortunately the deck has a lot of taunts, so often you can survive until the lategame. You need to fights for board as much as you can and try to play around Level Up!. Paladin runs no single target removal and often no silence, so they can’t really deal with any of your lategame minions if you get to that stage.

A very good matchup where you want to be aggressive. All you want in this matchup is big minions that will either hit face or trade very well into their taunts. Don’t play into their Brawls and try to always have a Deathrattle active so you are often left with 2 minions after the Brawl.

They main way you lose this matchup is by them pushing a lot of damage early or by getting a big spellstone that you can’t deal with. Try to not take too much damage, get to the lategame and they can’t deal with all the threats you play. Most of the time it is wrong to attack into their secrets so just leaving your minions on board is fine as the taunts will block the damage and allow you to reach the lategame where you can easily overpower them with your big minions.

A very good matchup because you get so much time to draw and recruit your big minions. It is not bad to not deal damage or develop in the early game since this matchup is all about the lategame minions. Try to get some very good turns off in the lategame where you have a big minion + a deathrattle so they can’t volcano your board. Often it is best to have 3 minions on board to play around Mind Control Tech, with one of them being a deathrattle so in case they do clear the board you are still left with one minion.

Hard Matchup, it is important to fight for board control. This matchup is won or lost by how strong of a boardstate the Shaman can get in the first few turns. Especially Flametongue Totem is strong in this matchup, so try to always have a way to deal with it or make it so that it is not a strong play. Lategame you can often just keep trading stuff because besides Hagatha the Witch, they will never be able to go toe to toe with your cards if they don’t have board.

You want to try to get control of the board early on so you want to be playing for tempo and going wide is often good as they don’t have any good AoE. The way to lose is often due to them getting multiple spiders off the Fal'dorei Strider, so you can’t be playing defensively too long and you have to go aggressive at some point.

Tempo is everything in this matchup. Try to not let them snowball minions such as Hench-Clan Thug or give them value trades into your taunts. Usually you want to trade everything because your taunts will protect you against any burst they can do. Sometimes though they facetank too much and you can pressure them back if they don’t have any good way of killing you the following turn and a card like Vilespine Slayer won’t punish you too much.

Much like Taunt Druid, this matchup revolves around the mid and lategame. Biggest difference here is that they play almost no good minions, but they do run Spreading Plague so don’t overcommit into that. Try to keep pressure up during the game and don’t give them time to draw into their combo.

Although the deck doesn’t have much AoE, this matchup is still fine. Token Druids can’t deal with both the big minions and all the taunts in the deck. Try to keep the board as small as possible, although leaving 1-2 minions up is often fine because you do want to push damage so they don’t have time to fill up a full board with minions plus Soul of the Forest.

Big minions are the biggest concern in this matchup. Both these decks can’t really deal well with your big minions either, so it often comes down to whether the Warlock can get some big minions early. Against even warlock you often don’t want to attack them in the face as Hooked Reaver can really punish that and pushing the extra damage is not worth it since they will do that themselves anyway and they have plenty of healing to recover from it. Also keep Lord Godfrey in mind versus Cubelock as this is often the only way they can clear one of your huge boards.

Secret mage is all about not taking too much damage early on. Only focus on this in the early game and after that they often run out of gas since they don’t play any minions over 3 health. If you have taunts up you can often ignore cards with no effect such as Kirin Tor Mage to push damage to finish the game before they draw all their burn. Don’t mind using your coin for a tempo play unless you have a Flanking Strike in hand because you only have a few spells and they aren’t too relevant in this matchup.

Control Mage has a lot of removal, so it can be hard to stick something on the board. Usually you want to try to have 2 threats on board so they can only clear one and the other one can go face. The only way for them to win is either get to play Frost Lich Jaina on a board where you don’t have a lot of pressure, or Dragoncaller Alanna which is often impossible for you to remove. This means you need to be aggressive while keeping of course all their removal in mind so you don’t overcommit too much into any.

Here you want to try to deny as much card draw as possible while keeping as much board control as possible. In this matchup you most of the time don’t need to kill them, you just need to survive. They run multiple silence effects, so try to not play too much into those. Also keep in mind that they run Lyra the Sunshard, so this is another way for them to win if they manage to stick it on the board.

If you want to change cards, these are the first ones I would cut:

Stitched Tracker: Very slow and it is very unreliable in getting a specific card.

Saronite Chain Gang: Don’t trade too well in this meta and no synergy with the deck besides Prince Keleseth.

The following cards you can run instead of the previously mentioned cards:

2nd Hunter's Mark: Helps a lot against Warlocks and can often be a nice tempo play.

Gluttonous Ooze: If you want weapon removal, this is the best option.

Deadly Shot: Similar to Hunter’s Mark, doesn’t require another card to be effective but can of course miss if there are multiple targets.

And now you might be wondering about Dire Frenzy, why do I not recommend it? Well I don’t think this is a good card in the deck unless the meta is incredibly slow. This card only works if you already have a beast on board, which generally means you are already in a good spot so you don’t need help from this card then. Besides that it is often unplayable and basically only good if you run out of recruitable minions, by which time the game is usually decided anyways.

Thank you for reading my guide! If you have any questions left or want tips for certain matchups you can leave them below in the comments or ask them during my stream. I hope you’ll enjoy this deck as much as I did! If you want to see more of my decks you can follow me on both Twitter and Twitch!