Been a while since i brought to you something that is not just a derivation of meta decks so I would like to change it. Meta is slowly shaping out and we can see a lot of Even Shame-ans on the ladder as well as some Odd Rogues in contrast to pretty greedy control decks. My goal was to make something which works against both of these strategies. 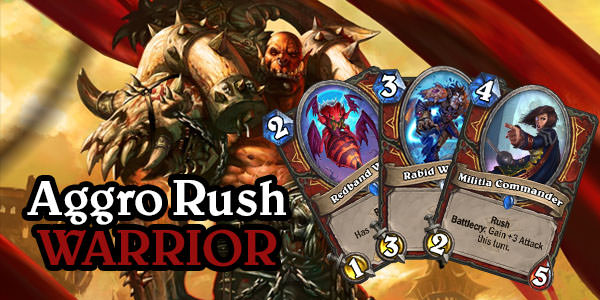 Why Warrior? Well it definitely got the best rush package from the last expansion. Rush is a super powerful effect which allows us to value trade directly from hand and gain tempo advantage. This is especially great in matchups with board-centric decks. For slower decks we have pretty standard charge/weapon package well known from last years pirate warrior meta. This deck worked really well for me and I didn't find any matchup to be ridiculously difficult. Deck is easy to pilot and I can recommend it to players of any skill level. Give it a try and let me know what do you think.

Thank you guys for upvotes! I'm starting to work on a guide. Hope I will bring it to you soon. Stay tuned!