Have great success with this personally while climbing out of the dumpster, it's also got great win-rates from others.

Have played about 100 games with it in total, didn't stat them all but here are my stats from April 14th. Data is from the Rank 12 to Rank 8 area on NA with much stagnation at Rank 9. I know this deck can go farther though, possibly with an extra Ironbeak Owl, some are saying they have success with Raid Leader but I cannot personally vouch for either. It's definitely an AMAZING deck to climb up from Rank 20 to 10 though (when I played it anyway YMMV!) 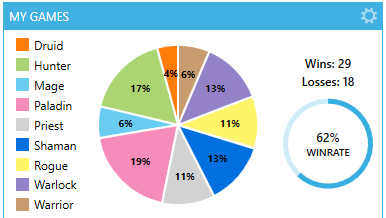 Played it for 5 hours on stream on Friday, April 13 with great success, going from Rank 20 to 12 with only a few issues. It was then played again for 6 hours going from Rank 12 to 8 - lots of Shamans and Warlocks stole games. You can see the modifications that were made based off some discussion I had with a viewer and how their odd dude deck was built. Ended up getting more consistency and higher winrate after ditching the Corridor Creepers, nah, I don't miss them at all anymore.

Really all you need to do is spam the board. Buff stuff up. I really liked holding onto a Level Up! if I got it in my opening hand because it always made for a good turn 5 or 6 play.

My favourite opening by far was Righteous Protector The Coin Acherus Veteran, though using Lost in the Jungle with Protector without a doubt is more scary for your opponent provided you're going turn 2.

I would like a second Ironbeak Owl in the deck to deal with the only annoyances that killed me or just for more consistency in obtaining the silence. Swapping out a Blessing of Might is a good call if you want to go that route.

Some may think of Blessing of Might as a dead card, but I found it to be quite the opposite since it allowed me to make VERY favourable trades with my dudes, eliminating a taunt blocking my path (such as Stonehill Defender which is in like every deck) or larger minions provided I already had some form of a buff on my Dude.

Sword of Justice makes for some really gross combos. Very easily can overwhelm with this card alone and it helps prevent the 1 damage aoes from destroying your board which is nice.

Stormwind Champion straight up won me a couple of games and has incredible value not only from being a buff to the board but also in that he can clear away a big target, deal huge face damage, or it becomes a target for everything your opponent has.

Light's Justice ... man ... it feels so weird playing with a basic weapon, but the value obtained for 1 mana is insane. You can make great trades using your health pool to keep your dudes alive and slamming that face.

I really like this deck and I can't wait to see how far I can take it. Hopefully Legend without too much of a grind. Should be an easy rank 5.

If you're fighting against another Odd Dude Paladin deck, it's going to come down to whoever is able to buff their field first so good luck!

Warlock games, you've probably lost. Sword of Justice definitely helps play against some of the bullshit though!

Having trouble with Warriors and their Taunt nonsense, luckily they seem to be rare where I'm at on the ladder right now.

I'll be streaming the deck this weekend whenever I get a chance. Give me a follow and get notified when I go live. I'll also tweet it out of you're into that kinda thing.

Sorry I don't have pictures of the winrates. Anyone watching on stream can vouch for it though :D.

Don't Play Prince Liam in the deck. Pls No.

I hope it's a troll from people but yeah, that card does NOT belong in here. It's going to completely ruin the synergy. I'm usually a person that is incredibly in favor of RNG but this is NOT the time for that kind of fun. Take that over to casual and honestly, just play the damn dude in Secret Paladin, you get way more fodder that is deserving of being replaced :P

5 hours long, I lose the first few games because OF COURSE, I had just started the stream up. The first version of this deck was played for around.. 3 hours? The current version is past that.