Video of combo in action (twitch)

Some fun and instructive games (twitch)

This deck is inspired by my old Molten Panda Combo Warrior deck. After the Warsong Commander nerf that restricted the minions that received charge to 3 attack or less, I continued to brew ideas to make it usable again in my spare time. The earliest incarnation of this deck actually made an appearance in Deck Wars Season 1 vs StrifeCro, where it was able to take 2 games in a best of 5. It wasn't until Naxxramas where both the metagame and the new card pool made a truly viable Warsong Commander deck possible again. 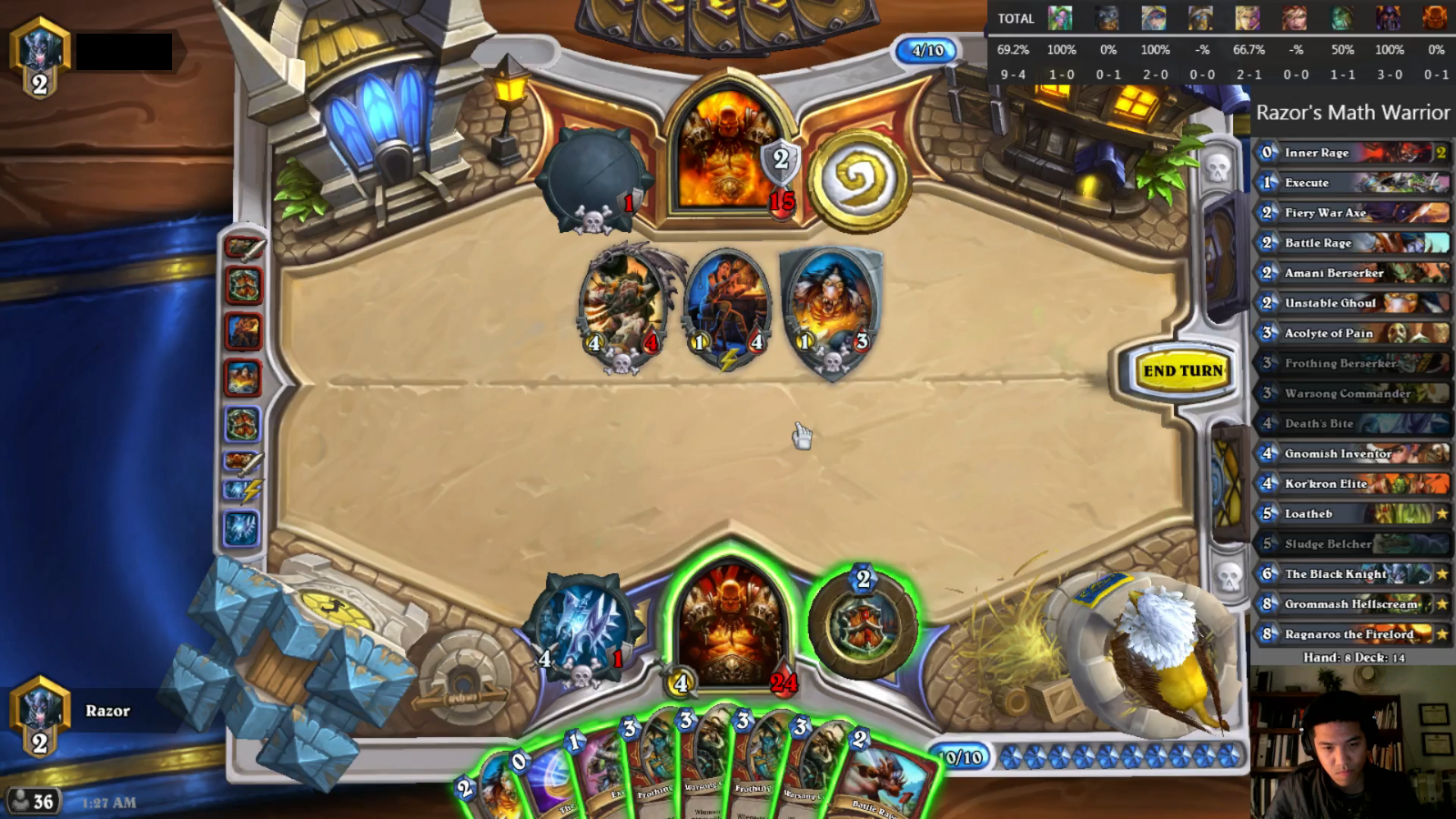 Do we have lethal? Let's do some math...

The name 'Math' Warrior comes presumably from Hyped, where one of my stream viewers told me he referred to it as such because of the extreme amount of counting the deck requires at times. I found the description very appropriate and decided to name it as such. 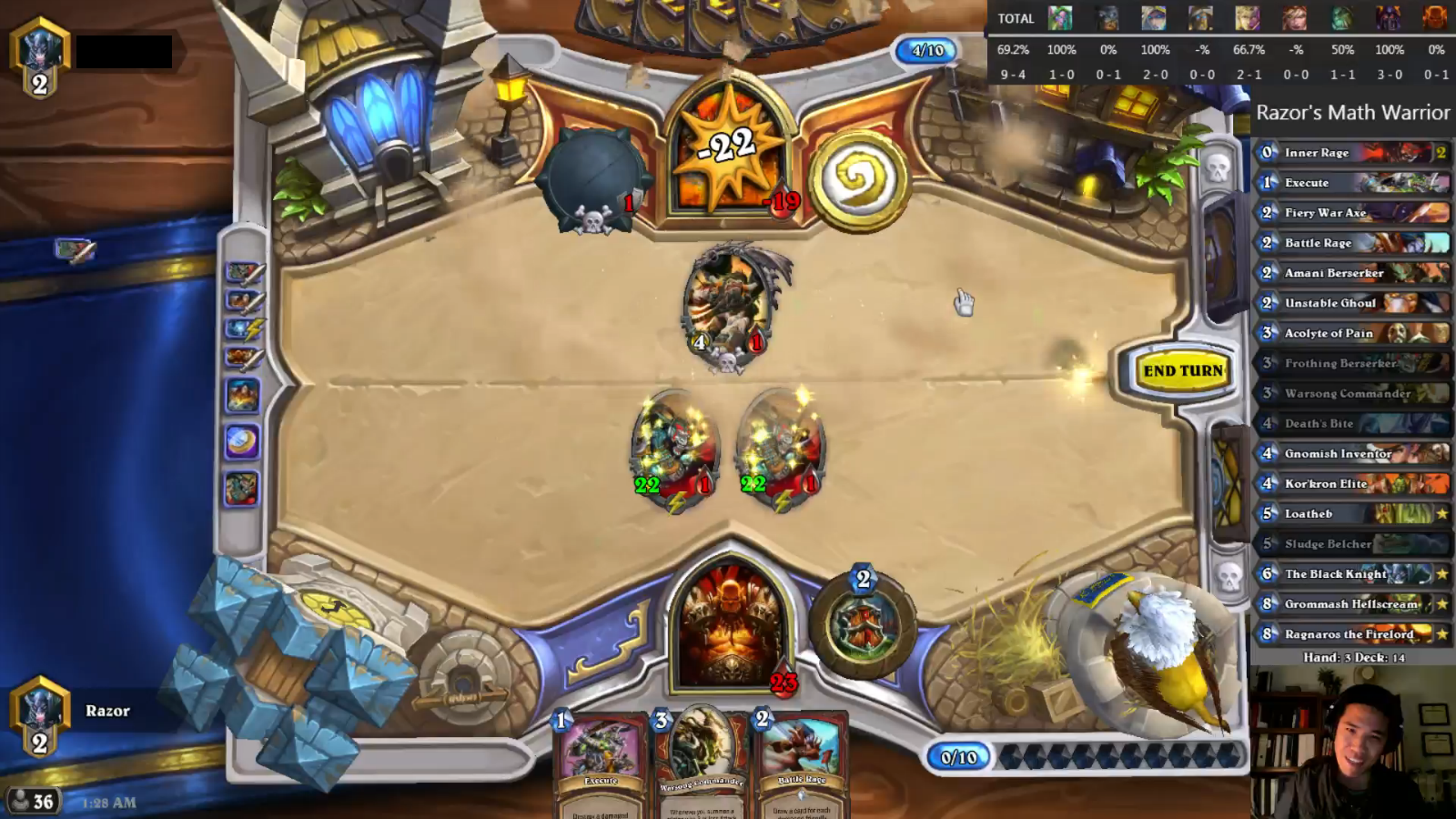 I played various iterations of this deck exclusively in ranked ladder in both Seasons 5 and 6, making Legend both times. I peaked at Legend #40 in Season 5, which to add some context, was before the Leeroy and Buzzard nerfs. I also brought this deck to the BlizzCon Qualifiers Phase 1, where I was able to 3-0 one opponent with it and take a few other games. While I'm not going to argue that this deck is going to be the next big thing, I will say that this is an alternative build of Warrior that is both fun and has the potential to be effective competitively.

This deck excels at being highly adaptable. While you can generally classify it as a combo deck, it can be played like either an aggro deck or a control deck as well, depending on your draws or what you feel is appropriate.

I've been told that this is one of the hardest decks to play optimally in Hearthstone. I'm not sure if it is true but I can understand why some people say this. Because of the ability to play both very aggressively or extremely greedily, the gameplay decisions are less clear cut than more linear decks such as Face Hunter or Control Warrior. As such, you'll often be finding yourself faced with several substantially different lines of play. Additionally, because you have multiple cards that have both singular use and also function as a part of a combo, you'll often need to make judgement calls on whether you want to play them immediately gain an early advantage or hold on to it to secure the combo for late game. It's difficult to summarize exactly how to play the deck concisely so my main advice is to simply practice deck to understand the implications of all the different lines of play. Generally speaking though, when in doubt, play it like a tempo deck - not a combo deck.

The core 'combo' featured in this deck is the combination of Warsong Commander, Frothing Berserker, Unstable Ghoul, with Death's Bite and Amani Berserker as cards that add additional value to the combo. When played together, you use the Death's Bite and the Unstable Ghoul's whirlwind-style effect to buff your Frothing Berserker and charge it at your opponent for large amounts of damage.

Battle Rage is an underused sleeper card that has become much stronger with the introduction of Death's Bite. You can almost always draw one card because it is not hard to get your hero damaged, and you can draw additional ones by casting it after Death's Bite deathrattle triggers with minions in play. You can also fairly reliably draw at least 2 cards because this decks plays are fair amount of mid-range minions that are not difficult to get damage in combat. Usually drawing 2 cards is sufficient value for Battle Rage, but drawing 3 or more is not uncommon and can be often too much for your opponent to overcome.

Inner Rage is an extremely versatile card. It can help activate execute, ping off small minions or help finish off larger ones for no mana cost. It allows you to activate Grommash on turn 8 instead of the traditional turn 10 with Cruel Taskmaster. It can net you an extra card with Battle Rage. It can also buff your Acolyte of Pain for an extra card and keep it from being stolen with Cabal Shadow Priest.

Ragnaros the Firelord - Used primarily to improve Druid and control matchups. Less useful against Shaman and Zoo. Could be replaced by Alexstrasza, Cairne, Ysera, or any other generally high value minion.

Gnomish Inventor - Used primarily to improve curve and draw density. Some cards of this deck work better when combined with one or two other cards, so drawing an extra card really helps. Could be replaced by Sen'jin Shieldmasta if the metagame leans towards aggro over control.

The Black Knight - Used primarily to improve the Handlock and Druid matchups. The large number of Sludge Belchers running around makes this card a pretty solid pick in the current metagame. Could be replaced by a solid 5 or 6 drop.

Amani Berserker - Used primarily to improve the Hunter and Aggro matchups. Also increases the damage ceiling of your lategame Warsong-Frothing-Unstable combo.  Can be replaced by Haunted Creeper, which has really neat interactions with Warsong Commander.

The strongest matchups (+65%) this deck has are against Control Paladin and Priest. This is notable because traditionally these decks are strong against our counterpart, the Control Warrior.

The weakest matchup this deck has is against Miracle Rogue, although the win-rate is around 50%. The Miracle Rogue stats are primarily from before the Leeroy nerf so today the matchup may play out differently today.

Mage and Warrior are generally favored matchups (+60%) that aren't overly draw dependent. The remaining matchups (Druid, Shaman, Zoo, Handlock, Hunter) are somewhat favorable (+55%) but because these matchups are more draw dependent, the effect of variance may make the true win-rates of this deck in those matchups different from what the stats collected suggest.

This deck is an absolute blast to play and has been a profound joy to develop. I hope you guys have as much fun playing it as I do! You can find me on twitch.tv/badrazor where I regularly stream this deck. I also have a large number of highlights and full games there explaining how to play the deck if you want to learn more. Feel free to leave feedback in the comments below, they're greatly appreciated!