Mission Statement:  Build your hand early and protect your health.  Then exhaust your opponent with a nearly endless supply of taunted giants and dragons.  (This sounds strangely familiar.) 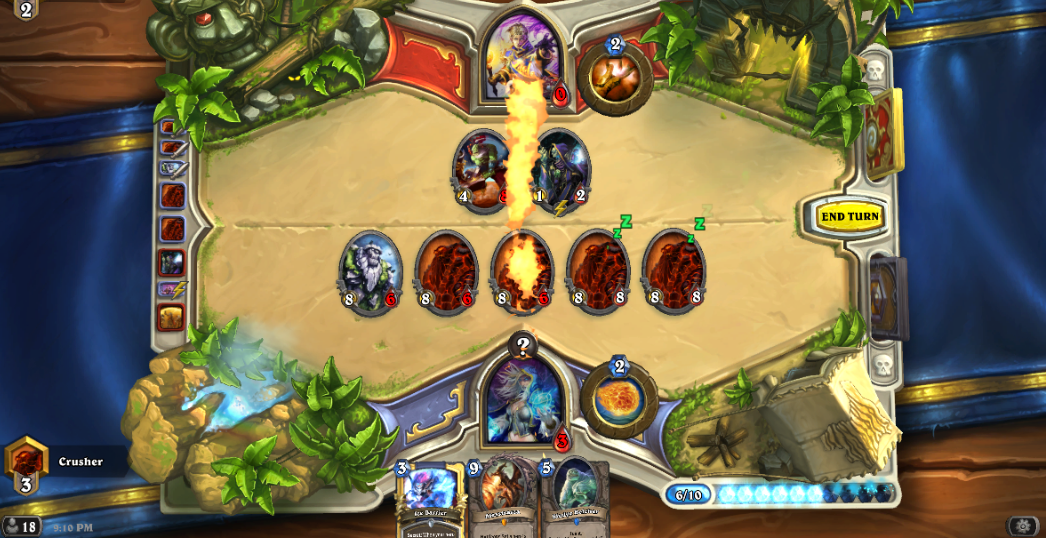 I was inspired after playing my Divine Paladin against a player named Asklepius, who was playing a modified version of Hyped's Miants Gage.  I was really impressed with the synergy between Duplicate and Twilight Drake, and I decided I would make a hybrid of this deck with Handlock.

Compared to Hyped's deck, this deck runs far less freeze, replacing it with taunt granting, burn, and card draw, while changing some of its heavy hitters to Mountain Giants.  By forcing my opponent to engage the unusually cheap, big minions via taunt granting, I find that I can consistently reach the late game, even without the freeze.  Once you're in the late game, your 7 (up to 11) giants and dragons will usually be enough to exhaust your opponent, securing the win.  A nice consequence of this deck's divergence from Frost Giants is a substantially reduced dust cost: 4,320 dust, less than half of Hyped's for comparison and most cards you already have if you've played Handlock.

I took this deck from rank 6 to Legend with all but the last two games before the (much anticipated) Starving Buzzard nerf.  It is strong against Miracle Rogue, Handlock, Control Warrior, Zoo, and Priest, but horrendous against Hunter.  With the nerf, this deck could be a real monster.

Acolyte of Pain (against aggro, only keep if you have no coin or no 4 drop, because you'd rather coin turn 3 for tempo)

Sunfury Protector against Shaman (good totem killer)
Arcane Intellect if no Acolyte of Pain
Duplicate if not against Mage or Shaman (Polymorph and Hex are a substantial risk early, but can be smoked out)

Arcane Intellect or Acolyte of Pain

Duplicate
Fireball or Polymorph against Druid (Innervate counter)
Mountain Giant if with Acolyte of Pain or Arcane Intellect (otherwise too slow for starting hand even against Control).

Matchups:  I have the stats for most of my games from ranks 1-5, though unfortunately records of a few random games were lost.  All but the last 2 games were played prior to the Starving Buzzard / Leeroy Jenkins nerf, so this deck should be even stronger in the current meta, since Hunter was by far its worst matchup (23% win rate with a 73% win rate against everything else).  Matchups are listed from statistically strongest to statistically weakest with all decks faced fewer than 4 times relegated to the "other" category.  Feel free to ask for advice on individual matchups in the comments.

Threats:  The teeth of this deck are its durable and powerful giants and dragons.  You have seven of them and the ability to generate up to four more via Duplicate.  Even decks that are prepared to face Handlock will likely not have enough answers for all the massive bodies this deck can field.  With the exception of Alexstrasza, you should also be able to play them cheaper than is on curve for their stats.

Twilight Drake:  One of the two "hand minions", which the deck is based around.  It should be a primary target for an early Duplicate.  Play it first thing on a turn (unless something else needs this order like Mountain Giant), but don't try too hard to buff its health.  Against aggro and even midrange, you'll often want to coin it out on turn 3 and/or forgo trading tempo for cards.  Weak to silence, but if duplicated, they'll run out of silence quickly.
Mountain Giant:  The other of the "hand minions".  Not as reliable to play early as with Handlock, but devastating when duplicated.

Molten Giant:  Key to winning against aggro.  Make sure to hold back a taunt granter, so that when your health gets low you can drop Molten Giants and taunt them (ideally with Ice Block support against burn)

Alexstrasza:  Could easily be part of the protection category as well, but its 8/8 body is just as threatening as the giants'.  Usually held back until health gets low enough that you need a heal (often after a popped Ice Block).  Remember to drop Molten Giants first!  Can also be used to make lethal when you have two giants survive to your turn or have 2 x Fireball and Frostbolt.  Really versatile despite its cost.

Duplicate:  Key to coming out ahead when the dust settles in a clash between control decks.  Ideally you are duplicating one of the above threats though sometimes a duplicated Sludge Belcher (endless taunt) can be effective depending on the context.  Make sure you don't accidentally duplicate a weaker card like an Acolyte of Pain or a Mad Scientist.  Use removal to maintain control while waiting for Duplicate to trigger and grant taunt to direct enemy attacks.

Card Draw:  Maintaining a large hand is important to getting the most value possible out of your Mountain Giants and Twilight Drakes, so card draw is key, but requires surprisingly few cards slots (in addition to Duplicate's ability to increase hand size).

Mad Scientist:  Incredible value as a 2/2 for 2 cantrip (better than loot hoarder) that plays the drawn card (secret) for free.  Play early, play often, but make sure that you are prepared for a Duplicate to get pulled.  If you are about to die, see if you can destroy your own Mad Scientist for a last ditch attempt at Ice Barrier or Ice Block.

Protection:  Though you should be playing your threatening minions for less mana than their stats would indicate, they still aren't that cheap.  You'll need some cards that disrupt your opponent's game plan, protect your life, and help stabilize the board.

Sunfury Protector:  Taunt granter that will help you through the early game against aggro, and will help you direct what gets duplicated later.  With Molten Giants, they make a last ditch wall, which can stop a lot of aggro decks (especially zoo) in their tracks.  Can be played on its own on turn 2 (especially against shaman where it can kill totems), but make sure you hold back some way to give taunt to your threats if you're facing a somewhat or very aggressive deck.

Defender of Argus:  Similar to Sunfury Protector, but pretty useless on its own.

Ice Barrier:  Some extra health will help you survive.  Used instead of a second Ice Block since they can be played in parallel.  Don't play Barrier too early, or you delay your Molten Giants, but don't play it too late or you risk being burned to death without triggering it.  Often a card you will dig for in desperation when your opponent has lethal (I have won games with Acolyte of Pain + ping into Ice Barrier/Block).

Ice Block:  Very strong in this deck.  Frequently you will let your Ice Block get triggered and then play Alexstrasza to bring yourself back to life (play your Molten Giants first).  Another card to dig for in desperation, including killing your own Mad Scientists.  Be aware of your opponent's burst potential and make sure you play Ice Block before they can unload.

Water Elemental:  It's a little bit of a stretch including this in the protection category, but this minion is fairly versatile with great stats.  Can destroy weenies for board control, freeze large threats to keep your life total up, or continuously freeze the opponent's hero for protection against weapons.  Occasionally, it's a good Duplicate target (can really mess with Warrior).
Sludge Belcher:  Seems like this is a two of in every deck these days.  Here it can be a 4 of if need be.  Excellent for stalling until you get your giant pieces together, but try not to rely on it too much against control, because in the long run, it usually doesn't trade all that well.

Removal/AoE:  Another key component to taking board control in the midgame is an assortment of removal and AoE spells.  It's especially important to be able to control the opponent's board from your hand when you're trying to duplicate a strong minion, and don't want to play weaker minions that could accidentally trigger it.

Frostbolt:  Great for early game board control, freezing a dangerous enemy minion (like Sylvanas Windrunner), or burn to close the game out.  Try to trade on the board rather than using Frostbolt until you get Duplicate out, as Frostbolt is great for forcing your opponents to destroy the minion you want them to.

Fireball:  Similar to Frostbolt, but more late game focused.  Very effective as burn, if you can hold onto it.

Polymorph:  Tempting to remove this, since Fireball usually functions similarly, but it's the only good answer to Sylvanas Windrunner and Ysera, who can otherwise be devastating.

Blizzard:  AoE for stabilizing in the midgame.  Also can be used to freeze the opposition and get extra swings out of your giants.
Flamestrike:  Board clear that helps you leverage your card advantage.

Good luck to everyone who tries this out!  It's great fun dropping all those giants and dragons, and with the Starving Buzzard, it should be an excellent meta call. Questions, suggestions, and general opinions are welcome in the comments.  Enjoy!

Lumin has created a 1 minute video deck guide explaining how to make and use this deck.  Check it out!  https://www.youtube.com/watch?v=XeAVeF7BGCg

Day9 showcased this deck on his regular segment, the Hearthstone Decktacular!  http://day9.tv/d/Day9/day9-hearthstone-decktacular-45-crusher-handmage/