UPDATE! The streak ended at 17.  Nice surprise streak 17-1 from Rank 8 to Rank 3 with this deck in <2hrs.  Destroys Paladin, Rogue.  Good match-up against Cube or Controlock, Priest, Mage unless they have god draw

*Climbed from Rank 17 to Rank 7 with Spiteful Summoner Priest last night (~6 hrs).  Lost 5 in a row at Rank 7 and decided to make a change.  Was seeing a lot of doomsayers being teched into Cubelock and Controlock and could not get enough damage through.  Paladin  and Zoolock matchups were dependent on Duskbreaker draws.  Mage was a coinflip. 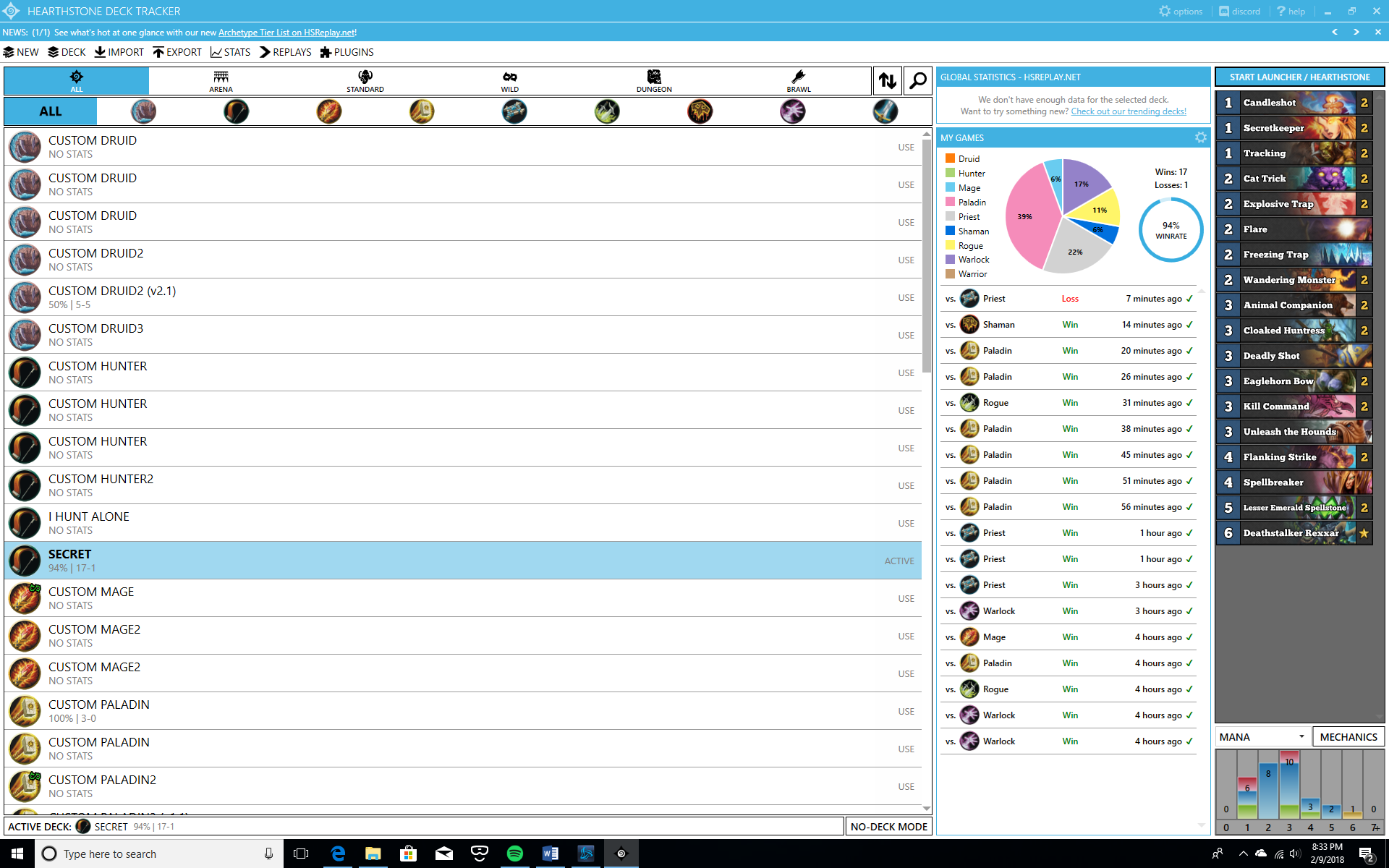 MVPs: Secrets man!  All the secrets work together to confuse your opponent, especially if you play them one turn after another.  Not sure what the sweet spot is for # of secrets with Cloaked Huntress, but probably 7-8.

Candleshot - This card is insane against other hunters and paladins.  It's defensive purpose cannot be overlooked as well.  Imagine playing against any common 2-drop 3/2 minion like Sorc apprentice or faerie dragon.  As a rogue you would often take 9 damage if you used your weapon.  This let's you only take 3, which is game winning in certain match-ups.

Tracking - helps you find lethal, thins your deck, or fills out your curve

Freezing trap - Did not think this would work out well, but it destroyed Mages, Warlocks, big priest.  Against Mages, it can prevent one turn of damage.  Against Warlocks, if they do not have dark pact they always attack with doomguards/voiddaddies (they don't play around this).  Against big priest, obv OP.

Cloaked huntress - basically this gives you insane tempo and your goal is to kill the opponent fast.

I pretty much like all the cards on the list, but Deathstalker Rexxar did not contribute to any of the wins so it is replaceable with another secret, deadly shot, UTH, or spellbreaker.

*Exception is one game where Cubelock was at 6 HP and then Guldan on turn 10 to go to 11.  Turn before I had built Dispatch kodo + Jungle Panther (7 mana 7 dmg) and top decked kill command for exact 11 dmg on turn 10 over the top :)

Gluck on the climb!  I'll answer questions if you have them.